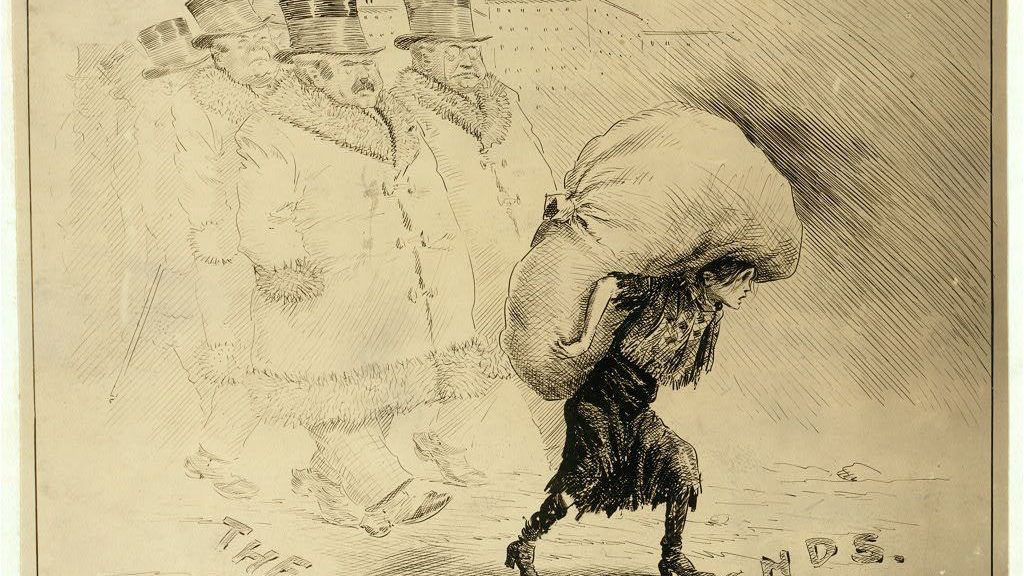 April 26, 1908: Goldman lectured on patriotism at Walton’s Pavilion in San Francisco. A United States soldier Pfc William Buwalda, attended the lecture in uniform and was witnessed shaking her hand. Within two weeks, he was court-martialed in violation of the 62nd Article of War, and found guilty by a military court, dishonorably discharged and sentenced to five years at hard labor on Alcatraz Island, San Francisco, California. (text from The Damnedest Radical by Roger A Bruns) (see May 22)

April 26, 1924: the U.S. House of Representatives passed House Joint Resolution No. 184, a constitutional amendment to prohibit the labor of persons under 18 years of age. The Senate approved the measure a few weeks later, but it was never ratified by the states and is still technically pending. (see Apr 28)

April 26, 2017: eight Yale graduate students began a hunger strike to pressure administrators to negotiate for union recognition. If a student has to stop fasting, another union member would take their spot.  (NPR story)  (Labor see May 2; Yale, see May 9)

April 26, 2018: thousands of Arizona teachers walked off the job with no idea how long the strike would last, or under what circumstances they would return to their students.

Leaders of Arizona Educators United, the grass-roots group pushing for more education funding, had been noncommittal about how long the strike would go on and what realistic solution could bring it to a close, saying those decisions were going to have to come from the teachers themselves and that the organization was taking it day by day.

Gov. Doug Ducey had ignored the group’s demands to meet with him. Lawmakers had shown no real effort to approve the more than $1 billion in new revenue educators demanded to bring education funding back to pre-recession levels. (see May 21)

April 26, 2021: President Biden signed an executive order creating a White House task force to promote labor organizing, an attempt to use the power of the federal government to reverse a decades-long decline in union membership.

Vice President Kamala Harris would lead the task force, to would include cabinet officials and White House advisers, would issue recommendations on how the government could use existing authority to help workers join labor unions and bargain collectively. It would also recommend new policies aimed at achieving these goals.

The administration noted that the National Labor Relations Act, the 1935 law governing federal labor rights, explicitly sought to encourage collective bargaining, but that the law had never been fully carried out in this regard. “No previous administration has taken a comprehensive approach to determining how the executive branch can advance worker organizing and collective bargaining,” a White House statement declared. [NYT article] (next LH, see June 23)

April 26, 1938: Jehovah’s Witness members Newton Cantwell and his sons, Jesse and Russell, were arrested in New Haven, Connecticut, and charged on this day with breach of the peace. They were later convicted. The Cassius Street neighborhood was 90 percent Catholic, and people took offense at the anti-Catholic propaganda the Cantwells played on a portable record player. (Justia article) (FS, see Nov 21; Cantwells, see May 20, 1940)

April 26, 1965: a case brought forth by Dr. James Dombrowski along with William Kunstler, founder of the Center for Constitutional Rights, against the governor of Louisiana, law enforcement officers, and the chairperson of the state’s Legislative Joint Committee on Un-American Activities for prosecuting or threatening to prosecute his organization under several state subversion statutes.

A a three-judge Federal district court had dismissed the claim, stating that Dombrowski had failed to show evidence of irreparable damage and asserted the abstention doctrine, stating that State Courts had the right to refrain from ruling in Constitutional questions.

Represented by attorney and civil rights leader Arthur Kinoy, Dombrowski appealed the case directly to the Supreme Court under then-operational procedures. The Court overturned the earlier dismissal, making note of the “chilling effect” the ruling below would have had on First amendment rights. (Oyez article) (see May 24)

April 26, 1968: police arrested 19-year old Paul Robert Cohen for wearing a jacket bearing the words “Fuck the Draft” inside the Los Angeles Courthouse in the corridor outside the division 20 of the municipal court. He was convicted of violating section 415 of the California Penal Code, which prohibited “maliciously and willfully disturb[ing] the peace or quiet of any neighborhood or person [by] offensive conduct,“ and sentenced to 30 days in jail. (Vietnam, see Apr 27; FS, see May 27; see Paul Robert Cohen for expanded story) 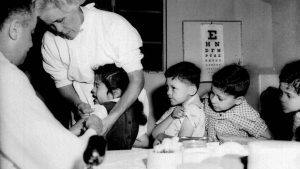 April 26, 1954: the Salk polio vaccine field trials, involving 1.8 million children, begin at the Franklin Sherman Elementary School in McLean, Virginia. Children in the United States, Canada and Finland participated in the trials, which used for the first time the now-standard double-blind method, whereby neither the patient nor attending doctor knew if the inoculation was the vaccine or a placebo. (TM, see Oct 18;Polio, see April 12, 1955) 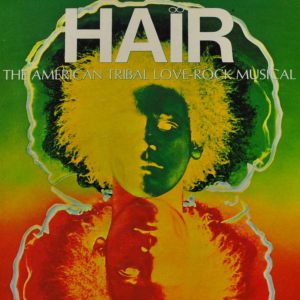 April 26, 1972: President Nixon, despite an ongoing communist offensive, announced that another 20,000 U.S. troops would be withdrawn from Vietnam in May and June, reducing authorized troop strength to 49,000. Nixon emphasized that while U.S. ground troops were being withdrawn, sea and air support for the South Vietnamese would continue. In fact, the U.S. Navy doubled the number of its fighting ships off Vietnam. (see May 7) 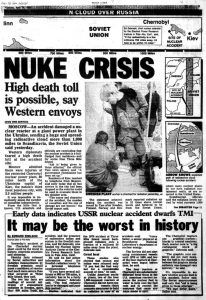 April 26,1986: an explosion occurred at one of  the four nuclear reactors at the Soviet Union’s Chernobyl power plant. The resulting fire burned for nine days and released at least 100 times more radiation than the atom bombs dropped on Nagasaki and Hiroshima. Radioactive deposits were found in nearly every country in the northern hemisphere. Two people died in the explosion and another 28 from acute radiation sickness in the immediate aftermath. Some experts predicted thousands of extra cancer deaths as a result of the disaster. A huge cover, known as the New Safe Confinement, was expected to be completed by 2015 remains unfinished. (Chernobyl Gallery dot com article) (see Aug 22)

She served her sentence at the Federal Correctional Institution in Waseca, Minnesota and was released in November 2018. (1995 NYT article) (see Dec 30)

April 26, 2019: The Kansas Supreme Court blocked a law that would have banned the most commonly used procedure for second-trimester abortions, arguing that the state Constitution protected the right of women to “decide whether to continue a pregnancy.”

The court sided in a 6-1 majority with the plaintiffs in the case, two physicians who performed the procedure, in a sweeping ruling that opened the door for abortion rights activists to challenge a series of other restrictions that the state’s Republican-controlled Legislature has enacted. [NYT article] (see May 2)

April 26, 2011: the NYPD argued that Stop-and-Frisk helped find illegal weapons, but an investigation by WNYC shows it may be leading to more low-level marijuana possession arrests. (see May 26)

April 26, 2015: the City of Abilene (Texas) Water Department experienced a spill of domestic wastewater from the City’s wastewater collection system. The area of the spill was cultivated agricultural farm land. The estimated spill volume was about 1.5 million gallons. The spill occurred due to a failure of the sewer force-main pipeline.

The city advised persons using private drinking water supply wells located within one half mile of the spill site or within the potentially affected area to use only water that was been distilled or boiled at a rolling boil for at least one minute for all personal uses including drinking, cooking, bathing, and tooth brushing. Individuals with private water wells should have their well water tested and disinfected, if necessary, prior to discontinuing distillation or boiling. (see May 19)

The new rule states that light bulbs must emit a minimum of 45 lumens per watt. Lumens are a measure of brightness. The rule was an effective nail in the coffin for incandescent bulbs, which use a higher wattage than LED bulbs for the same amount of brightness.

Old bulbs that don’t meet the new standard will need to be phased out of production within 75 days, and the Department of Energy will work with manufacturers to ease the transition. Full enforcement of the rule will go into effect in July 2023, which is also the deadline for retailers to stop selling them. [CNN article] (next EI, see Aug 25)

The law known as Act 23 had already been blocked by a state judge.

“There is no way to determine exactly how many people Act 23 will prevent or deter from voting without considering the individual circumstances of each of the 300,000 plus citizens who lack an ID,” Adelman wrote in his 70-page ruling. “But no matter how imprecise my estimate may be, it is absolutely clear that Act 23 will prevent more legitimate votes from being cast than fraudulent votes.” (see July 29)

April 26, 2019 Maine replaced Columbus Day with Indigenous Peoples’ Day, joining an increasing number of states and localities that have made the change.

“There is power in a name and in who we choose to honor,” Gov. Janet T. Mills of Maine said in a statement about the bill. [NYT article] (see May 20)

April 26, 2019:  the Roman Catholic Archdiocese of New York released the names of 115 priests and five deacons who had been “credibly accused” of sexually abusing children.

In a letter to members and family of the archdiocese, New York’s archbishop, Cardinal Timothy Dolan, asked forgiveness “for the failings of those clergy and bishops who should have provided for the safety of our young people but instead betrayed the trust placed in them by God and by the faithful.” [NPR article] (see June 11)

April 26, 2020: for two months, the shooting received little attention outside Brunswick, GA. As the coronavirus pandemic dominated headlines and shut down communities around the country, The NY Times spoke with Mr. Arbery’s friends and family, who were by then concerned the case might quietly disappear in their Deep South community, because social distancing restrictions had made it difficult for them to gather and protest. [NYT article]  (next B & S and AA, see May 5 or see AA for expanded chronology)

April 26, 2022: Lawrence S. Bacow, Harvard University’s president, announced that the university was committing $100 million to study and redress its ties to slavery and with that money will create an endowed “Legacy of Slavery Fund,” which would continue researching and memorializing that history, working with descendants of Black and Native American people enslaved at Harvard, as well as their broader communities.

With the announcement, Harvard joined many other universities — including Brown, Georgetown and Princeton Theological Seminary — that were not just grappling with their complicity in the institution of slavery but also putting financial resources behind efforts to make amends.

Harvard’s financial commitment rivaled the $100 million pledged by the leaders of the Jesuit conference of priests in March 2021 to be used for racial reconciliation and to benefit the descendants of 272 enslaved people sold in 1838 to pay off the debts of Georgetown University.

A report released with Harvard’s announcement said that at its roots, the university, which was founded in 1636, owed its immense wealth to patrons of the university whose fortunes were made on the backs of enslaved people, and whose names still festoon dormitories and other buildings that students walk in and out of every day.

“Harvard benefited from and in some ways perpetuated practices that were profoundly immoral,” Bacow said in an email to the university’s students, faculty and staff members. “Consequently, I believe we bear a moral responsibility to do what we can to address the persistent corrosive effects of those historical practices on individuals, on Harvard, and on our society.”  [NYT article] (next BH, see Apr 27)

April 26, 2021: the Census Bureau reported that over the past decade United States population grew at the second slowest rate since the government started counting in 1790 due to a slowdown in immigration and a declining birthrate.

The bureau also reported changes to the nation’s political map: The long-running trend of the South and the West gaining population — and the congressional representation that came with it — at the expense of the Northeast and the Midwest continued, with Texas gaining two seats and Florida one, and New York and Ohio each losing one. California, long a leader in population growth, lost a seat for the first time in history. [NYT article] (next Census, see March 10, 2022)