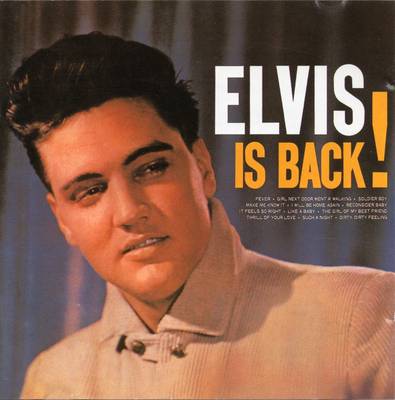 in January 1960: John Coltrane released “Giant Steps” album, considered a classic jazz album and one that saxophonists still measure themselves by today. The Penguin Guide

January 18 – February 7, 1960: “Running Bear” by Johnny Preston #1 Billboard Hot 100. Second of three #1 songs in a row in which a person or persons die. The song was written by J. P. Richardson (aka The Big Bopper) with background vocals by Richardson and George Jones, who do the Indian chanting of “UGO UGO” during the three verses, as well as the Indian war cries.

February 8 – 21, 1960:  “Teen Angel” by Mark Dinning #1 Billboard Hot 100. Released the previous October, radio stations were reluctant to play it and it was banned by the BBC. Performed by Sha Na Na at Woodstock. Third of three #1 songs in a row in which a person or persons die.

April 21, 1960: Dick Clark testified before a congressional committee investigating payola. He admitted that he had a financial interest in 27 percent of the records he played on his show in a period of 28 months.

May 19, 1960: five radio disk jockeys, including Alan Freed, were arrested on charges that they had accepted payola. District Attorney Frank Hogan said they had accepted illegal gratuities amounting to $116,580 from twenty-three record companies in the previous two years.

In June, 1960: Ornette Coleman released “Change of the Century” album.

July 18 – Aug 7, 1960,: “I’m Sorry” by 15-year-old Brenda Lee #1 Billboard Hot 100. According to the Billboard Book of Number One Hits by Fred Bronson, Lee recorded the song early in 1960 but her label, Decca Records, held it from release for several months out of concern that a 15-year-old girl was not mature enough to sing about unrequited love.

August 31 –September 6, 1960: Max Roach records We Insist! Max Roach’s Freedom Now Suite album.  The Penguin Guide to Jazz has awarded the album one of its rare crown accolades, in addition to featuring it as part of its Core Collection.

September 13, 1960: the Federal Communications act in the USA was amended to outlaw payments of cash or gifts in exchange for airplay of records.

September 19 – 25, 1960: “The Twist” by 18-year-old Chubby Checker #1 Billboard Hot 100 . The song was written by Hank Ballard and originally the B-side of Hank Ballard & the Midnighters’ “Teardrops on Your Letter” in 1959. Checker was born Ernest Evans. His boss nicknamed him Chubby. He made a private recording, “The Class,” on which he imitated many singers of the time including Fats Domino. The record was given to Dick Clark whose wife, after Ernest Evans said his nickname was Chubby, asked, “As in Checker?” referring to Fats Domino. The name stuck.

October 20, 1960: Charles Mingus records “Fables of Faubus” with lyrics for his Charles Mingus Presents Charles Mingus album for release on independent label after Columbia Records had refused to release it with lyrics.  The song was written as a direct protest against Arkansas governor Orval E. Faubus  who in 1957 had sent out the National Guard to prevent the integration of Little Rock Central High School by nine African American teenagers. October 24 – November 13, 1960: “I Want to Be Wanted” by Benda Lee #1 Billboard Hot 100. She was still 15-years-old.

November 21 – 27, 1960:  “Stay” by Maurice Williams and the Zodiacs #1 Billboard Hot 100. Williams wrote the song in 1953 when he was 15 after unsuccessfully trying to convince his girlfriend to ignore her 10 o’clock curfew. The original recording of “Stay” remains the shortest single ever to reach the top of the American record charts, being only 1 minute and 37 seconds long.