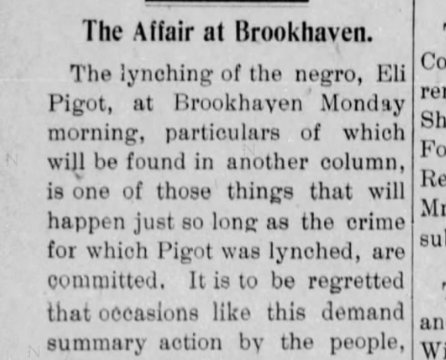 February 10, 1908: a mob of more than 2,000 white people in Brookhaven, Mississippi  lynched Eli Pigot, a black man, accused of assaulting a white woman.

According to news reports, police deputies and armed military guards transported Pigot from Jackson to Brookhaven to stand trial. Upon arrival in Brookhaven, the lynch mob briefly scuffled with the military guards before seizing him, kicking and beating him, and then hanging him from a telephone pole less than a hundred yards from the Lincoln County Courthouse. The mob then riddled Mr. Pigot’s corpse with bullets as it swung from the pole. [EJI article] (next BH, see Mar 27; next Lynching, see Aug 14; for for expanded chronology, see American Lynching 2)

February 10, 1987: authorities charged the three white teen-agers from Queens (Jon Lester, Scott Kern and Jason Ladone) with murder and charged nine others  with lesser crimes in the second attempt by authorities to identify and prosecute participants in the Howard Beach racial attack of Michael Griffith and others.

Their original indictments had been dismissed after the witnesses refused to cooperate in the case. (BH, see Feb 20; Howard Beach, see Dec 21)

February 10, 2012: Brooklyn area state legislators introduced legislation that would establish an NYPD independent inspector general position. The call for such a move came from NYPD surveillance of the Muslim community and stop-and-frisk. (NYCLU report 2002 – 2016 that points out that nine out of 10 stopped and frisked New Yorkers had been found completely innocent) (see Feb 14) 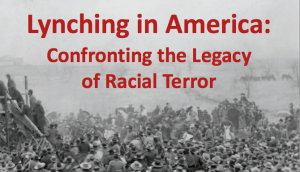 February 10, 2020: CBS News reported that Holden Matthews, the sheriff’s deputy’s son who was arrested in a series of fires set at African American churches in Louisiana in the spring of 2019 pleaded guilty to four federal criminal counts. Matthews, 22, admitted he set the fires to raise his profile as an aspiring “black metal” musician, the U.S. Attorney’s Office said in a statement.

The statement from federal prosecutors said that Matthews pleaded guilty to three counts of intentional damage to religious property, a federal hate crime carrying a possible 20-year sentence per count. He also pleaded to one count of using fire to commit a felony, which has a possible 10-year sentence. He entered the pleas in federal court in Lafayette. Three churches were burned in a span of 10 days, beginning in late March 2019, in an area roughly 140 miles west of New Orleans in St. Landry Parish. (next BH, see June 3; next CB & Matthews, see Nov 2)

February 10, 1914: rubber workers belonging to the Industrial Workers of the World went on strike in Akron, Ohio. The rubber companies broke the strike through heavy-handed tactics, including the organization of a Citizens’ Police Association, comprising 1,000 vigilantes, and institution of martial law. (see Feb 13)

February 10, 1963:  eleven members of the Carpenters’ union in Reesor Siding, Northern Ontario are shot, three fatally, by independent local farmer-settlers who were supplying wood to a Spruce Falls Power and Paper Co. plant. Some 400 union members were attempting to block an outbound shipment from the plant. The action came as the company was insisting on a pay freeze and two months of seven-day-a-week work. (see Apr 1) 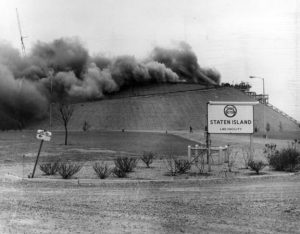 February 10, 1979: 22 days into a bitter vegetable strike, United Farm Workers member, Rufino Contreras, 28, and half a dozen fellow strikers walked into an Imperial Valley lettuce field owned by Mario Saikhon to talk with a crew of imported scabs. Three armed company foremen opened up with a vicious crossfire. Rufino fell face down in a muddy row, shot in the face. His father Lorenzo, brother Jose Luis, and other Saikhon strikers tried to aid Rufino, but they were kept away for more than an hour by continuing gunfire from the foremen. Finally, sheriff’s deputies arrived and called an ambulance. Rufino died in the hospital. in Imperial Valley; moratorium called for 25 days on strike (see Mar 8) 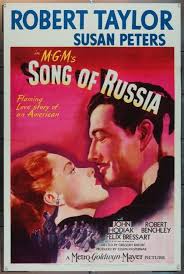 February 10, 1944: the MGM movies released Song of Russia. The plot of the fictional movie is an account of an American Conductor John Meredith (Robert Taylor) and his manager, Hank Higgins (Robert Benchley). They go to Russia shortly before the Nazi invasion of the Soviet Union. Meredith falls in love with beautiful Soviet pianist Nadya Stepanova (Susan Peters). They travel throughout the country on a 40-city tour. Along the way, they see happy, healthy, smiling, free Soviet citizens, blissfully living the Communist dream. This bliss is destroyed by the German invasion. (Song of Russia, see October 20, 1947)

In 1945: in the postwar era, Americans flock to church in record numbers, swelling the growth of traditional denominations — Methodists, Baptists, Disciples of Christ, Lutherans and Presbyterians. Church building booms; Bible sales skyrocket. Amid the prosperity, the United States and the Soviet Union face off in the Cold War, a spiritual struggle that pits Christian America against “godless communism.” (Religion, see July 1945; CW, see Feb 4)

February 10, 1962:  after James B. Donovan negotiated the exchange, U2 pilot Gary Powers and  American student Frederic Pryor were exchanged for Soviet KGB Colonel Vilyam Fisher, who had been jailed as a Soviet spy. Ironically, Donovan had been Fisher’s defense lawyer. (see Feb 16)

February 10, 1947:  the US Supreme Court ruled in the case of Everson v. Board of Education, Township of Ewing that New Jersey’s law subsidizing the transportation of students to Catholic schools on public buses was not a violation of the establishment clause. The Court argued that transportation, like police and fire protection, appropriately advances the public welfare, and that the child, not the religious school, was the primary beneficiary of the aid. Therefore the state’s practice does not violate the First Amendment. (see June 2)

February 10, 1967: Beatles finished the recording of ‘A Day In The Life’ with one of the most famous chords in rock music. The Beatles had originally recorded an ending of their voices humming the chord, but even after multiple overdubs, it wasn’t what they wanted.

To achieve the sound they wanted, all four Beatles and their road manager, Mal Evans, played an E Major chord on 3 separate pianos. They let the chord ring out for as long as possible while producer George Martin had to keep turning up the volume of the mics to capture the sound. If you listen closely on a good stereo, you can hear the sound of studio noises at the end. (see March 18 – 24)

February 10, 1969: Michael Lang and Artie Kornfeld met with John Roberts and Joel Rosenman the second time. The idea of a concert to promote the proposed recording studio was discussed. (see Road for expanded story) 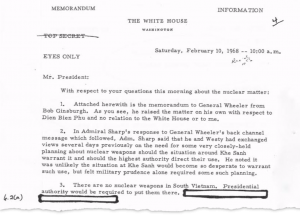 February 10, 1968:   General Westmoreland had activated a secret operation, code-named Fracture Jaw, that included moving nuclear weapons into South Vietnam so that they could be used on short notice against North Vietnamese troops.

On this date, President Lyndon B. Johnson forcefully overruled the activation.

According to Tom Johnson, then a young special assistant to the president and note-taker at the meetings on the issue,  “When he learned that the planning had been set in motion, he was extraordinarily upset and forcefully sent word through Rostow [Walt W. Rostow, the White House national security adviser], …to Westmoreland, to shut it down,” Johnson said in an interview.

Johnson said the president’s fear was “a wider war” in which the Chinese would enter the fray, as they had in Korea in 1950.  (see Feb 13)

Unsafe at Any Speed 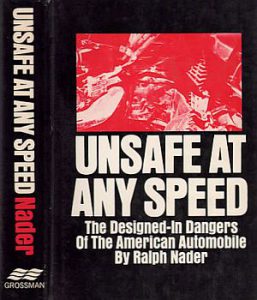 February 10, 1966: Ralph Nader, a young lawyer and the author of the groundbreaking book “Unsafe at Any Speed: The Designed-In Dangers of the American Automobile,” testified before Congress for the first time about unsafe practices in the auto industry. By the mid-1960s, U.S. automakers were still largely unregulated. Nader’s book, which was published in November 1965, accused car companies of designing vehicles with an emphasis on style and power at the expense of consumer safety. One chapter of “Unsafe at Any Speed” focused on handling problems with the Chevrolet Corvair, a car produced by auto giant General Motors (GM).

Shortly after Nader’s congressional testimony, the news media reported that Nader had been followed by detectives. It was later determined that starting in early February 1966, GM sent investigators to spy on Nader and look into his personal life in an effort to discredit him. Nader sued GM for harassment and invasion of privacy and won a settlement. The publicity surrounding GM’s actions helped make “Unsafe at Any Speed” a best-seller and turn Ralph Nader a household name. (NYT 50th anniversary article) (see June 24)

February 10, 2010: Department of Health and Human Services Secretary Kathleen Sebelius announced an award totaling $900,000 over three years to Services and Advocacy for GLBT Elders (SAGE) to establish the nation’s first national resource center to assist communities across the country in their efforts to provide services and supports for older lesbian, gay, bisexual and transgender (LGBTQ) individuals. “The Resource Center will provide information, assistance and resources for both mainstream aging organizations and LGBTQ organizations and will provide assistance to LGBTQ individuals as they plan for future long-term care needs,” said Secretary Sebelius. (SAGE site) (see Mar 3)

February 10, 2005:  North Korea announced that it possessed nuclear weapons as a protection against the hostility it feels from the US. (Washington Post article) (see March 21,  2008)

February 10, 2014: Senator Maria Cantwell, Democrat of Washington State and chairwoman of the Indian Affairs Committee, and Representative Tom Cole, Republican of Oklahoma and a member of the Native American Caucus sent a strongly worded letter to Roger Goodell, the commissioner of the National Football League, urging him to support changing the name of the Washington Redskins because it offended Native Americans and others, with Cantwell saying she might reconsider the league’s tax-exempt status if it does not comply.

Cantwell said in an interview that lawmakers would “definitely” examine the N.F.L.’s tax-exempt status and other ways to pressure the league. “You’re getting a tax break for educational purposes, but you’re still embracing a name that people see as a slur and encouraging it.” (see May 27)

February 10, 2021: Larry Flynt, a ninth-grade dropout who built a $400 million empire of raunchy publications, strip clubs and “adult” shops around his sexually explicit magazine Hustler, and spent decades battling obscenity and libel charges as a self-promoting champion of freedom of the press, died at his home in Los Angeles. He was 78.

Flynt’s most significant legal victory came in a long fight against the Rev. Jerry Falwell, the television evangelist and founder of the Moral Majority, who sued for $45 million for libel and emotional distress in 1983 after Hustler published a parody in which he reminisced about a sexual encounter with his mother in an outhouse.

A jury rejected the libel charge, saying the parody was obviously not factual, but awarded Falwell $200,000 for emotional distress.

In 1988, the Supreme Court unanimously threw out the damages, calling the parody constitutionally protected political satire.

Flynt hailed the decision as the most important First Amendment victory since the obscenity ban on James Joyce’s “Ulysses” was overturned in the 1930s. (next FS, see June 23)