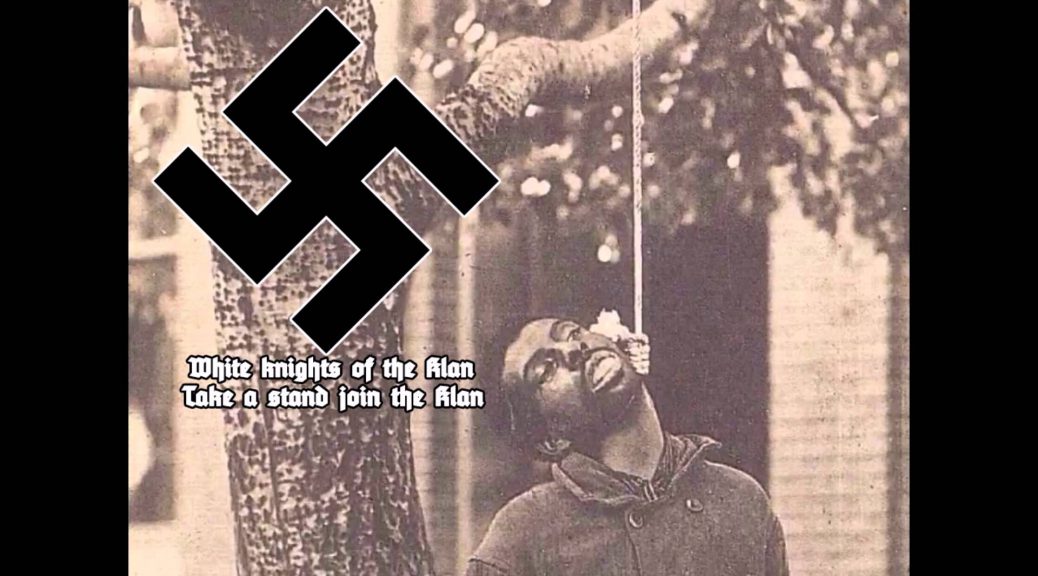 February 15, 1804:  New Jersey passed a law delaying the end of slavery for decades. It provided for the “gradual emancipation of slaves” and in doing so became the last Northern state to begin the process of ending enslavement within its borders. Using the language of bondage, the 1804 act provided that children of enslaved people born after July 4, 1804, would be freed when they reached the age of 21 for women and the age of 15 for men. [EJI article] (next BH, see “In January” 1805) 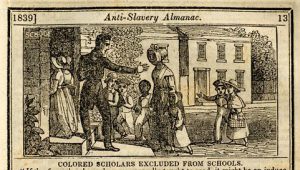 February 15, 1848: 5-year-old Sarah Roberts  (“a colored child…, a resident of Boston, and living with her father.”) had applied to a member of the (Boston) district primary school committee for a ticket of admission to her district school. The school committee refused her application “on the ground of her being a colored person.”

On this date Sarah Roberts “went into the primary schol nearest her residence, but without any ticket of admission…and was…ejected from the school by the teacher.”  Benjamin Roberts, Sarah’s father, sued the City of Boston. (BH, see Mar 17; SD, see December 4, 1849; see SR for expanded chronology)

February 15, 1935: Samuel Leibowitz argued before the US Supreme Court,  that blacks had been excluded from the Scottsboro jury pool because of their race. Leibowitz claimed that the black names currently on the jury rolls had been forged in after the fact. (see Scottsboro for expanded story)

February 15 – 21, 1960: Edward R. Zane, a member of the Greensboro City Council, worked with students to reach a compromise. The Mayor agreed to appoint a committee to address the issue, and the protesters agreed to continue negotiations. Several Greensboro associations, including The Board of Directors of the Greensboro Council of Church Women, the YWCA, and several ministerial alliances came out in favor of integration. (see G4 for expanded chronology)

February 15, 1961: more than 300 acres in which Rev Ralph Abernathy had an interest were ordered sold in order to help satisfy the libel  judgment against him in the L B Sullivan suit. (BH & FS, see Feb 21)

February 15, 1964: Sam Bowers viewed the original Ku Klux Klan as being too passive. On this date at a meeting in Brookhaven, Mississippi, he convinced about 200 members of the original Knights to defect and join his Klan, to be called the White Knights of the Ku Klux Klan, that would not hesitate to reveal the true nature of CORE, SPLC, NAACP, and SDS to achieve its goals. He became the group’s fraternal “imperial wizard”. Bowers adopted a code of secrecy with the purpose of preserving law and order in the South. (BH, see Feb 22; Bowers, see June 7)

February 15, 1965: Richard Robles indicted for the Wylie/Hoffert murders. Robles “maintains his innocence,” according to his court-appointed attorney. (see Whitmore for expanded story) 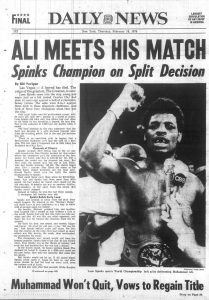 February 15, 1879: President Rutherford B. Hayes signed legislation allowing women to be admitted to practice before the US Supreme Court. (next Feminism, see March 3) 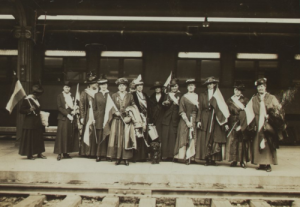 February 15, 1919: the “Prison Special” tour began when a train named “Democracy Limited” left Union Station in Washington, D.C. and traveled across country with 26 suffragists on board who had served jail sentences. Over next three weeks, the women, often dressed in prison costumes, spoke about their incarceration and sought support for federal woman suffrage amendment. (see Feb 24)

February 15, 1979:  Peter Burkin bombed the clinic of abortion rights activist Bill Baird in Hempstead, Long Island. . All escaped due to Baird’s training drills with his employees that prepared them for such a violent attack. Burkin was given a two-year sentence in a mental hospital. (next Feminism  see October 14, 1979)

The Red Scare & US Labor History 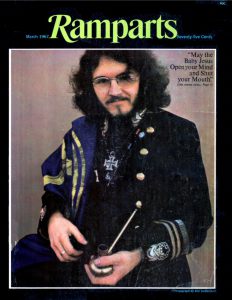 February 15, 1967: the March 1967 issue of Ramparts magazine created a national sensation by publishing an exposé of Central Intelligence Agency’s secret funding of education groups, including primarily the National Student Association. The article was titled, “A Short Account of International Student Politics and the Cold War with Particular Reference to the NSA, CIA, etc.” It was the first significant breach in the veil of secrecy surrounding the CIA, and the first revelation of secret funding of American organizations and journalists.

From the mid-1960s to the mid-1970s, Ramparts was the most important anti-war, counter-culture, general circulation magazines in the U.S. It was later revealed that the CIA learned of the forthcoming article and spied on the magazine and its writers in violation of the CIA charter that forbade the agency from spying within the United States. (2015 New Yorker magazine article on topic) (see November 17, 1969)

The Beatles: Meet the Beatles

February 15, 1967: the Viet Cong shot down thirteen American helicopters in one day, 10 in one area. An American spokesman said that 9 or the 10 were repairable.

Based on Pentagon announcements about 685 helicopters had been destroyed in the war to this point. (see Mar 2)

February 15, 1970: Judge Julius Hoffman convicted the two defense attorneys and three of the defendants to prison for contempt of court. William M Kunstler was convicted of 24 counts of contempt and sentenced to 4 years and 13 days in a Federal prison. Leonard Weinglass, the other defense attorney was found guilty on 14 counts of contempt and sentenced to 1 year 8 months and 3 days.

February 15, 1989: The Soviet Union announced that all of its troops had left Afghanistan.

February 15, 1993: Hugh Gale, a 70-year-old man with emphysema and congestive heart disease, died in his Roseville home. Prosecutors investigated after Right-to-Life advocates find papers that show Kevorkian altered his account of Gale’s death, deleting a reference to a request by Gale to halt the procedure. (see JK for expanded chronology)

February 15, 2008: the American College of Physicians (ACP) stated its support for the use of non-smoked forms of THC, research on the benefits of medical marijuana, review of the federal scheduling of marijuana, and exemption from criminal prosecution. (Natural News article) (see Nov 4 or see CCC for expanded chronology)

February 15, 2011: Judge Nancy G. Edmunds of Federal District Court sentenced Umar Farouk Abdulmutallab, who tried to blow up a Detroit-bound airliner with explosives concealed in his underwear on Christmas Day in 2009. Edmunds his crime and subsequent lack of remorse demanded the maximum possible punishment.. (see November 21, 2013)

February 15, 2015: Roy Moore, the conservative chief justice of Alabama’s Supreme Court, said that if the U.S. Supreme Court decided that same-sex couples have a constitutional right to marry, he would defy the ruling because it would alter God’s “organic law.” (see Feb 17)

February 15, 2019: the Roman Catholic Diocese of Brooklyn named more than 100 priests who had been credibly accused of sexually abusing a child. It was one of the largest disclosures yet in a torrent of lists recently published by the church as its handling of the problem had drawn the scrutiny of law enforcement officials.

The diocese was also one of the largest in the nation, its domain encompassing Brooklyn and Queens in New York City, an area with 1.5 million people who the church said identify as Catholic.

The disclosure covered decades of allegations involving priests who had served in the diocese’s many neighborhood parishes, as well as its schools, including Cathedral Preparatory, Christ the King, St. Francis Preparatory and Archbishop Molloy high schools. Advocates who track abuse cases said it also roughly doubled the number of suspected abusers they had been aware of in the diocese. (see Feb 16)

February 15, 2019: President Trump declared a national emergency on the border with Mexico in order to access billions of dollars that Congress refused to give him to build a wall there, transforming a highly charged policy dispute into a confrontation over the separation of powers outlined in the Constitution.

Trying to regain momentum after losing a grinding two-month battle with lawmakers over funding the wall, Mr. Trump asserted that the flow of drugs, criminals and illegal immigrants from Mexico constituted a profound threat to national security that justified unilateral action.

“We’re going to confront the national security crisis on our southern border, and we’re going to do it one way or the other,” he said in a televised statement in the Rose Garden barely 13 hours after Congress passed a spending measure without the money he had sought. “It’s an invasion,” he added. “We have an invasion of drugs and criminals coming into our country.” (IH & TW, see Feb 18)

February 15, 2019: Colin Kaepernick reached a settlement over his collusion grievance against the National Football League. His attorneys, Mark Geragos, and Ben Meiselas and the NFL released a joint statement announcing that a settlement had been reached by the league and the former San Francisco 49ers’ quarterback and Carolina Panthers safety Eric Reid, who filed a similar grievance.  (next FS,  see June 24; next LH,  see Feb 21; next CK, see Feb 27)

February 15, 2022: jurors found that The New York Times did not defame Sarah Palin, the former Alaska governor and Republican vice presidential candidate, in a June 2017 editorial that wrongly claimed a link between an ad from her political action committee and a mass shooting many months later.

It was a one-two punch for Palin. The unanimous verdict came a day after the presiding judge, U.S. District Judge Jed Rakoff, ruled that he would set aside the jury’s verdict — whatever it might be — and dismiss the case. He said Palin had failed to make a sufficient argument that the Times had acted with actual malice to let the case be determined by a jury.

That legal standard of “actual malice,” set in a 1964 U.S. Supreme Court ruling that also involved the Times, requires that the newspaper either knowingly published damning and false information or recklessly disregarded the likelihood that its claims were likely to prove false.

“You decided the facts. I decided the law,” Rakoff told jurors on Tuesday. “It turns out they were both in agreement, in this case.”  NPR article] (next FS, see )