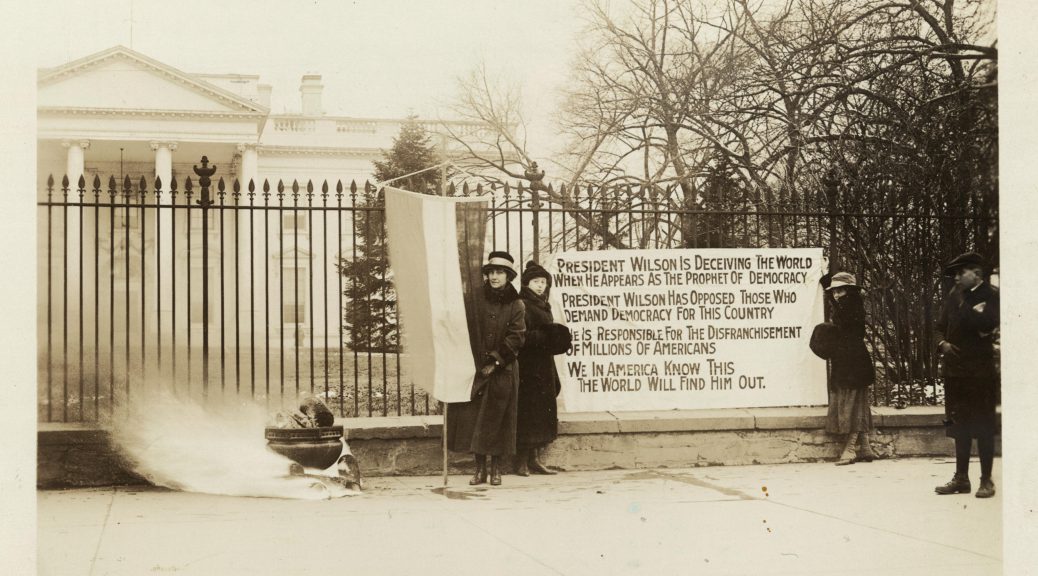 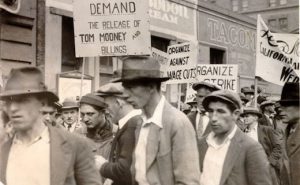 February 9 – 13, 1919: suffragists continued their protests in front of the White House. On February 9, they burned an effigy of President Woodrow Wilson and also threw copies of his speeches into the fire.

The first “watch fire” in front of the White House had occurred on January 1, 1919. Sailors and soldiers attacked the protest and overturned the urn which held the fire. Similar protest fires, with the burning of Wilson’s speeches, occurred over the next two weeks.

The suffragist protests at the White House  had escalated in 1917, under the leadership of Alice Paul (see the events of January 10, 1917; October 20, 1917). President Woodrow Wilson finally reversed his position and announced his support of a constitutional amendment on January 9, 1918, but mostly for political reasons. On August 18, 1920, the Nineteenth Amendment granting women equal voting rights in federal elections was ratified, and women voted for president for the first time on November 2, 1920. (see Feb 10) 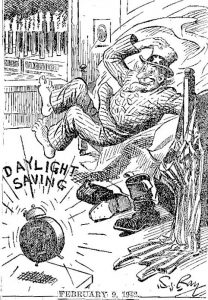 February 9, 1942: Congress pushed ahead standard time for the United States by one hour in each time zone, imposing daylight saving time–called at the time “war time.” Daylight saving time, suggested by President Roosevelt, was imposed to conserve fuel, and could be traced back to World War I, when Congress imposed one standard time on the United States to enable the country to better utilize resources, following the European model. The 1918 Standard Time Act was meant to be in effect for only seven months of the year–and was discontinued nationally after the war. But individual states continued to turn clocks ahead one hour in spring and back one hour in fall. The World War II legislation imposed daylight saving time for the entire nation for the entire year. It was repealed September 30, 1945, when individual states once again imposed their own “standard” time. It was not until 1966 that Congress passed legislation setting a standard time that permanently superseded local habits. (see May 29)

February 9, 1950: Wisconsin Senator Joseph McCarthy gave a speech in Wheeling, Virginia, dramatically claiming, “I have in my hand a list of 205 cases of individuals who appear to be either card-carrying members or certainly loyal to the Communist Party” within the US State Department.” among whom was former State Department consultant and university professor Owen Lattimore. (see Feb 20) 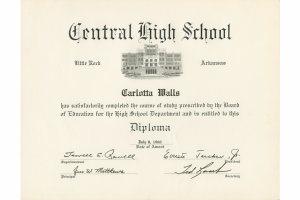 February 9, 1960: in September 1957, Arkansas Governor  Orval Faubus ordered the Arkansas National Guard to prevent the integration of Little Rock’s Central High School by barring nine newly admitted black students from entering the school building. In order to compel the school’s integration, President Dwight Eisenhower federalized the National Guard and ordered troops to escort the students into the school. That group of black students came to be known as the Little Rock Nine, and fourteen-year-old Carlotta Walls was the youngest among them.

Carlotta Walls later described the integration experience as “painful” and recalled that Central High’s white students fell into three groups: those who tormented her and the other black students; those who sympathized with them; and those who silently ignored the way they were treated.

Young Carlotta remained at Central throughout her high school years. On February 9, 1960, four weeks before graduation, a bomb exploded at her home. Carlotta, her mother, and her sister were at home but no one was injured. Police arrested and beat Carlotta’s father in unsuccessful efforts to coerce a confession. Police then arrested two young black men, Herbert Monts, a family friend, and Maceo Binns, Jr. Carlotta never believed either man was responsible, but both were convicted and sentenced to five years in prison.

In 2010, Ms. Walls described the bombing and its aftermath as the worst part of the integration experience, and firmly asserted that “the segregationists were behind all of it – the bombing and the arrests of Herbert and Maceo.”  (BH, see Feb 13; SD, see Nov 14)

February 9, 1961: African-American students arrested for conducting sit-ins a segregated lunch counters in Atlanta refused bail and chose instead to remain in jail as part of a “jail-in,” designed to dramatize both segregation and their arrests. The recent arrests brought the number of of “jail-in” participants to seventy in the Fulton County (Atlanta) prison. Meanwhile, thirteen sit-in activists remained in jail in York County, South Carolina (see February 2, 1961), after being arrested for sit-ins in Rock Hill, South Carolina. The leader of the Atlanta sit-ins, Herschelle Sullivan, explained that she hoped the “jail-in” would bring about intervention by President Kennedy to end segregation in the south. (see Mar 6)

February 9, 1968: march organizer  Cleveland Sellers was taken into custody by sheriff’s deputies after treatment at the Orangeburg Regional Hospital. He was charged with inciting to riot, arson, assault with intent to kill, and damaging property. As he was led away by the county sheriff, Sellers—concerned for his own safety—told every student he passed, “Y’all see I’m going with the sheriff. The sheriff’s got me.” Trained in such survival techniques from his days of civil rights demonstrations in Mississippi, Sellers recalled that his verbal proclamations to witnesses caught the attention of the sheriff and believed they may have kept him alive in the turbulent hours ahead. (for more see 1968 Orangeburg Massacre; next BH, see Feb 12)

February 9, 1961, The Beatles made their first lunchtime debut as The Beatles at the Cavern. (see Mar 24)

Exactly three years later, on February 9, 1964 was their first appearance on Ed Sullivan Show. That afternoon The Beatles recorded Twist And Shout, Please Please Me, and I Want To Hold Your Hand, in front of a different audience to the one that saw their live debut that evening. This set was broadcast on 23 February as the group’s third Ed Sullivan appearance, after they had left the US. (see Feb 11)

February 9, 1972: Paul McCartney became the first ex-Beatle to go on tour when, after several days of rehearsals at London’s Institute of Contemporary Arts, Wings played their first-ever live concert, at 12 o’clock noon, in Nottingham University’s Portland Building Ballroom. It was the first stop on a two-week hit-and-run tour of universities in the United Kingdom. In an effort to keep audiences small, the time and place of each concert was kept a closely guarded secret until just hours before showtime. Word circulated fast, however, and at Hull University, a full house of 800 awaited the band. Admission was 50 pence, with the proceeds divided equally among the band’s members.

No Lennon-McCartney songs were performed, though each show did conclude with an encore of Little Richards’s “Long Tall Sally,” a song recorded by the Beatles in 1964 and often performed by them as a closing number at their concerts. In addition, Wings’ set lists also featured a brand new song, not yet recorded, that would not be released for more than a year; one of 1973’s biggest hits, “My Love.” (see Feb 14)

February 9 – March 1, 1963: “Hey Paula” by Paul and Paula #1 on the Billboard Hot 100. “Paul” was the song’s writer, Ray Hildebrand, a student at Howard Payne College in Brownwood, Texas. “Paula” was Jill Jackson, the niece of the owner of the boarding house where Ray lived. 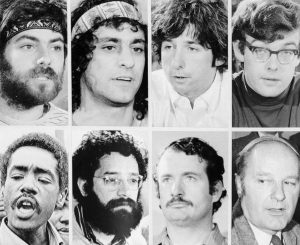 February 9, 1970: testimony was formally completed in the trial after Judge Julius Hoffman refused to admit the defense’s last four pieces of evidence. The trial lasted almost 4 ½ months, 20,000 pages of transcript, and 193 witnesses—11 for the defense and 80 for the Government. (see Feb 14)

February 9, 1999:  the Senate began closed-door deliberations on President Clinton’s fate, after rejecting a “sunshine” proposal to open the proceedings to the public. (see Clinton for expanded story)

February 9, 2014: Michael Sam, a 24-year-old University of Missouri graduate and All-American football player, publicly announced that he was gay. He became the first publicly gay player to be drafted in the NFL, but the Los Angeles Rams cut him. He also spent time on the Dallas Cowboys’ practice squad before being waived. He plays on the Canadian Football League’s Montreal Alouettes. (see Feb 12)

February 9, 2015: US Supreme Court Justices denied a request by Alabama attorney general Luther Strange to extend a hold on US District Judge Callie V.S. Granade’s ruling overturning the state’s ban on same-sex marriage. Strange had asked the United States Supreme Court to halt the weddings until the justices settle the issue nationwide when they would take it up this year. In at least 50 of Alabama’s 67 counties, the county Probate Courts, which issue the licenses, were not giving them to gay and lesbian couples. Many probate court judges declined to grant any marriage licenses.

Of the nine US Supreme Court Justices, only two – conservatives Clarence Thomas and Antonin Scalia – dissented from the court’s refusal to block gay weddings from starting in Alabama. Gay marriage was now legal in 37 states. (see Feb 12)

February 9, 2016: Dallas Federal District Judge David Godsby ruled against Texas’ efforts to stop the resettlement of Syrian refugees in the state. Godsby said the State had failed to show how allowing the federal government to work with local non-profits to resettle Syrian refugees posed a creditable threat to the state.   Godsby said, that state Republican leaders’ attempts to block families fleeing the war-torn country need to be handled through “the political process” and not the courtroom.

Rebecca Robertson was the senior legal counsel with the ACLU of Texas represented g the International Rescue Committee, which had sued by the State after Republican leadership at the capitol demanded non-profits stop working with federal officials to settle Syrian families in Texas.

“There is nothing in the law that gives the state veto power over any decision of the federal government or permits any state to discriminate against certain refugees based on their nationality, in fact the law says just the opposite,” Robertson explained. (see June 23)

The ruling was the first from an appeals court on the travel ban, and it was focused on the narrow question of whether it should be blocked while courts consider its lawfulness. The decision was likely to be quickly appealed to the United States Supreme Court.

February 9, 2017: a leaked report from the Department of Homeland Security put the cost of building the wall (and fencing) at around three times as much as Trump originally estimated, $21 billion in total, and estimates that construction would take at least three years to complete. The report did not take into account “major physical barriers, like mountains, in areas where it would not be feasible to build.”  (IH, see Feb 9; TW, see June 21 or see TWall for expanded chronology)

The brief order was not the last word on the case, which would most likely to return to the Supreme Court after an appeals court considered an expedited challenge from 29 states and dozens of corporations and industry groups.  (see Sept 10)