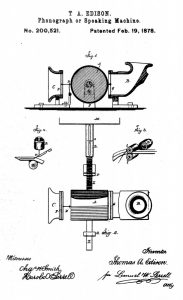 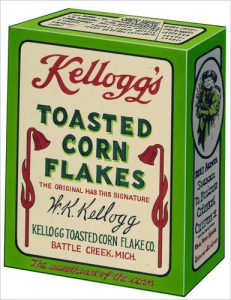 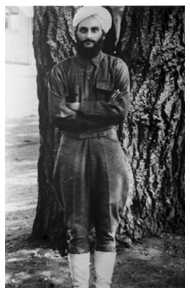 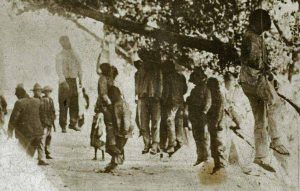 February 19, 1923: in Moore v. Dempsey, the U.S. Supreme Court ruled 6-2 that mob-dominated trials violated the due process clause of the Fourteenth Amendment. In 1919, African-American sharecroppers had gathered in a church at Elaine, Ark., to discuss fairer prices for their products. White men fired into church, leading to three days of fighting and the killing of five white men and more than 100 black men, women and children. A white committee appointed by the governor concluded the black men planned to kill all the whites. More than 700 African-American men were arrested with 67 sent to prison and a dozen to Death Row. The Supreme Court reversed the cases on appeal, concluding the trial had been prejudiced by a white mob outside yelling that if the black men weren’t sentenced to death, the mob would lynch them. The court decision was a major victory for African Americans and the NAACP, which had represented the men. (PBS article) (next BH, see June 21; next Lynching, see April 29 or see AL3 for expanded chronology of early 20th century lynching) 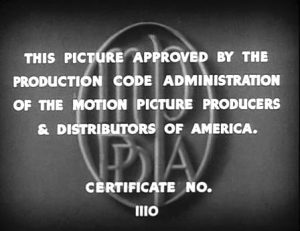 February 19, 1930: almost from the birth of the movies in America, films faced censorship efforts. Beginning in the early 1920s, leaders of the motion picture industry tried various methods to impose self-censorship on Hollywood films as a strategy to head off government censorship. One version was published in Variety magazine on this day. The 1930 Production Code spelled out specific restrictions on “offensive” language and behavior, particularly regarding sex and crime, and prohibited the ridicule of religion. It also forbade the depiction of illegal drug use, venereal disease, childbirth, and sexual relations between races.

Catholic religious leaders especially had turned up the heat on Hollywood, calling for strict moral standards and a Code of Conduct for movie content. Four years later, on June 13, 1934, facing threats of boycotts of “indecent” films, Hollywood adopted the famous and puritanical Production Code that imposed rigid censorship on American movies that lasted until the 1960s. (see Mar 31) 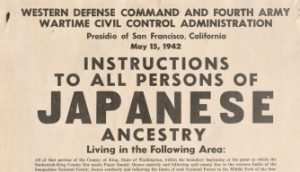 February 19, 1942: President Franklin D. Roosevelt signed and issued Executive Order 9066 authorizing the Secretary of War to prescribe certain areas as military zones. Eventually, EO 9066 cleared the way for the relocation of Japanese Americans to internment camps. By June, the government relocated more than 110,000 Japanese Americans to remote internment camps built by the U.S. military in scattered locations around the country. During the course of World War II, 10 Americans were convicted of spying for Japan. Not one was of Japanese ancestry. (see Internment for expanded story) 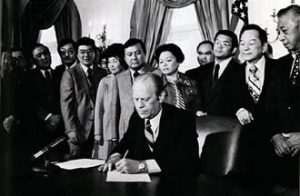 February 19, 1976: in a largely symbolic act in the Bicentennial year, President Gerald Ford on this day issued Proclamation 4417, officially rescinding President Franklin Roosevelt’s Executive Order 9066, authorizing the evacuation of Japanese-Americans from the West Coast. President Ford rescinded Roosevelt’s order on the same day Roosevelt had acted, thirty-four years later. (See February 19, 1942.)  Although a  symbolic act, President Ford’s order was an important statement, nonetheless. The treatment of the Japanese-Americans in World War II is regarded by many as the greatest civil liberties tragedy in American history. Congress passed the Civil Liberties Act on August 10, 1988, apologizing to the Japanese Americans and providing reparations of $20,000 to each surviving victim. (Ford Library article) (see Internment for expanded chronology) 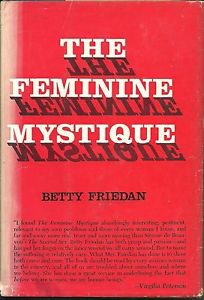 February 19, 1963: W.W. Norton and Co published The Feminine Mystique by Betty Friedan. The book gave voice to the discontent and confinement women experienced in their societal roles as housewives and helped to spark the development of the Women’s Liberation Movement. (NYT review) (see  Apr 7)

February 19, 1965: some units of the Army of the Republic of Vietnam commanded by General Lâm Văn Phát and Colonel Phạm Ngọc Thảo launched a coup against General Nguyễn Khánh, the head of South Vietnam’s ruling military junta. Their aim was to install General Trần Thiện Khiêm, a Khánh rival who had been sent to Washington D.C. as Ambassador to the United States to prevent him from seizing power. The attempted coup reached a stalemate, and although the trio did not take power, a group of officers led by General Nguyễn Chánh Thi and Air Marshal Nguyễn Cao Kỳ, and hostile to both the plot and to Khánh himself, were able to force a leadership change and take control themselves with the support of American officials, who had lost confidence in Khánh. (V & SVL, see Feb 20)

February 19 – March 4, 1966 — Herb Albert’s Whipped Cream and Other Delights is the Billboard #1 album. It is one of the most famous album covers of all time. (see Whipped Cream for more)

February 19, 1966: The National Planning Conference of Homophile Organizations, held in Kansas City, Missouri, on this day, was arguably the first such national meeting of the various homosexual organizations in the U.S. (Enacademic article) (see Apr 1)

February 19, 2013: The executive committee of the 16-million member Southern Baptist Convention passed a resolution stating that a proposal to alter the Boy Scout ban on gays would “place the…organization at odds with a consistent biblical worldview on matters of human sexuality, making it an organization that would no longer complement, but rather contradict, our belief in God and His moral precepts that serve as the basis for our Christian faith.” (see Mar 26)

February 19, 1974: as ordered by the SLA, Randolph Hearst announced that he would create People in Need (P.I.N.), a food distribution program. P.I.N. director Ludlow Kramer expected that the program would feed 100,000 people for twelve months with $2 million. (see Patty Hearst for expanded story)

February 19, 1975: NLRB v. J. Weingarten, Inc., was a case decided by the US Supreme Court that ruled that employees in unionized workplaces had the right under the National Labor Relations Act to the presence of a union steward during any management inquiry that the employee reasonably believes may result in discipline. (see  Dec 23)

February 19, 2020: the NYT reported that oil and gas production might be responsible for a far larger share of the soaring levels of methane, a powerful greenhouse gas, in the earth’s atmosphere, new research has found.

The findings, published in the journal Nature, added urgency of efforts to rein in methane emissions from the fossil fuel industry, which routinely leaks or intentionally releases the gas into air.

“We’ve identified a gigantic discrepancy that shows the industry needs to, at the very least, improve their monitoring,” said Benjamin Hmiel, a researcher at the University of Rochester and the study’s lead author. “If these emissions are truly coming from oil, gas extraction, production use, the industry isn’t even reporting or seeing that right now.” (next EI, see Apr 16) 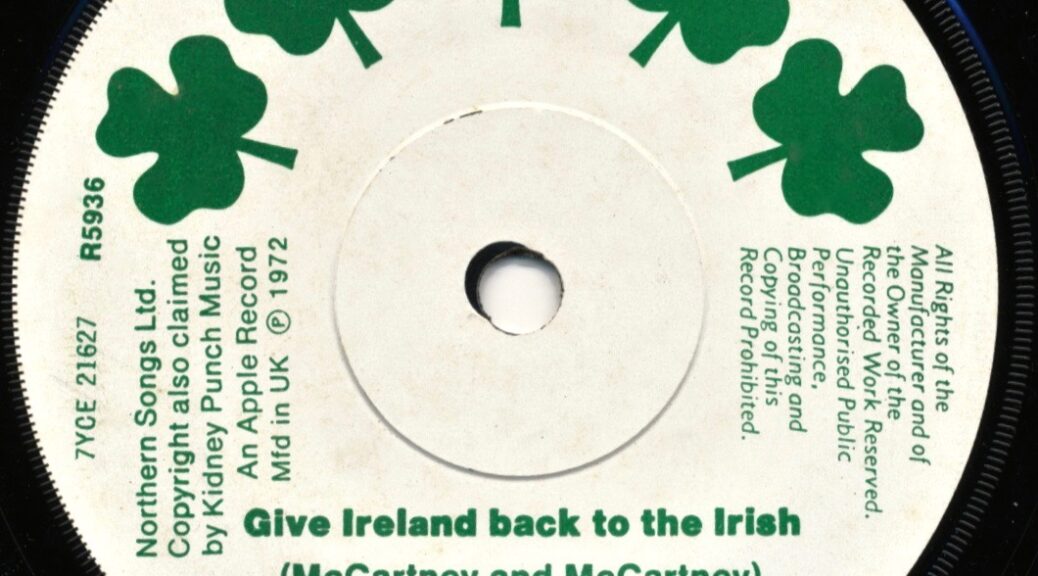 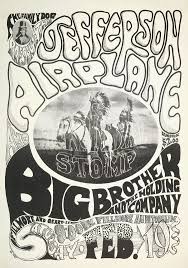 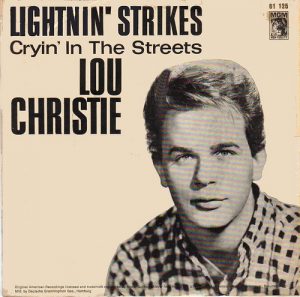 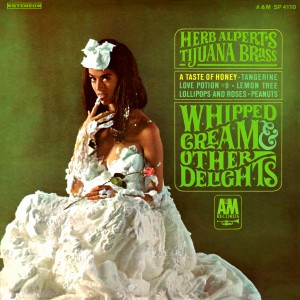