February 26, 1885: Alien Contract Labor Law, also known as the Foran Act, was an act to prohibit the importation and migration of foreigners and aliens under contract or agreement to perform labor in the United States, its Territories, and the District of Columbia. (see Sept 2; Alien Contract Law, see February 7, 1887)

February 26, 2018: the Supreme Court declined to clear the way for the Trump administration to end the Obama-era program that protects about 700,000 young immigrants from deportation, meaning that the so-called “Dreamers” could remain in legal limbo for months unless Congress acted to make their status permanent.

President Trump ended the Deferred Action for Childhood Arrivals, or DACA, program on September 5, 2017, calling it an unconstitutional use of executive power by his predecessor and reviving the threat of deportation for immigrants who had been brought to the United States illegally as young children.

The Supreme Court’s decision not to hear the government’s appeal would keep the program alive for months. (IH, see Feb 27; DACA, see Mar 19)

February 26, 2019: the House voted to overturn President Trump’s declaration of a national emergency on the Mexican border, with just 13 Republicans joining Democrats to try to block his effort to divert funding to a border wall without congressional approval.

House Republican leaders kept defections low after feverishly working to assuage concerns among rank-and-file members about protecting congressional powers and about the precedent that Trump could be setting for Democratic presidents to use for their own purposes. (next IH & TW, see In March) 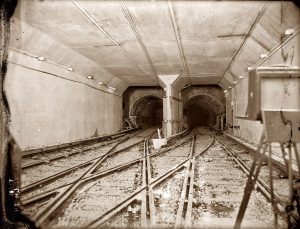 February 26, 1908: at midnight, service through the Hudson & Manhattan railway tunnels opened to the public, carrying passengers between Manhattan and Hoboken New Jersey. It was the first railroad tunnel under a major river in the U.S. (Hoboken article) (see Sept 26)

February 26 1946: highway patrolmen entered the Mink Slide district. The officers fired randomly into buildings, stole cash and goods, searched homes without warrants, and took any guns, rifles, and shotguns they could find. When the sweep was over, more than one hundred blacks had been arrested, and about three hundred weapons from the black community had been confiscated. None of the accused were granted bail or allowed legal counsel. (Tennessee article)  (see Feb 28)

February 26, 1965:  Jimmie Lee Jackson died at Good Samaritan Hospital in Selma. After his death, Sister Michael Anne, an administrator at Good Samaritan, said there were powder burns on Mr. Jackson’s abdomen, indicating that he was shot at very close range. When civil rights organizer, James Bevel, heard of Jackson’s death he called for a march from Selma to Montgomery to talk to Governor George Wallace about the attack in which Jackson was shot.  (BH, see Mar 1; March to Selma, see Mar 7; Jackson, see September)

February 26, 1965: the first contingent of South Korean troops arrived in Saigon. Although assigned to non-combat duties, they came under fire on April 3. The South Korean contingent was part of the Free World Military Forces, an effort by President Lyndon B. Johnson to enlist allies for the United States and South Vietnam. By securing support from other nations, Johnson hoped to build an international consensus behind his policies in Vietnam. The effort was also known as the “many flags” program. By the close of 1969, there were over 47,800 Korean soldiers actively involved in combat operations in South Vietnam. Seoul began to withdraw its troops in February 1972. (see Mar 1)

February 26, 1971: despite the conclusion that General S W Koster was the motivating force behind the cover-up, charges against Koster were dropped. Koster‘s only reprimand comes in the form of a reduction in rank. (see My Lai for expanded story; Vietnam, see “In March”)

February 26, 1965: the TWA employees union challenged the forced retirement of stewardesses on this day. These women were also forbidden to marry and were monitored for their weight. This event was one of a number of growing challenges to the discriminatory policies regarding female flight attendants. By the end of the 1970s, the discriminatory practices against them were gone, and the job had the unisex title of Flight Attendant. (Labor, see January 1, 1966; F, see January 20, 1966)

February 26, 1993: a van packed with a 1,210-pound bomb exploded in the parking garage underneath the World Trade Center. The explosion left a gigantic crater 200 feet wide and caused over 591 million dollars in damage. Six people were killed and more than a thousand injured. (see Mar 4) 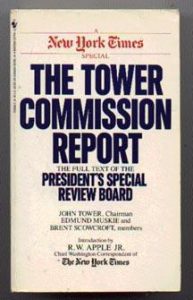 February 26, 1990: refusing to consider the cases of Ben-Shalom v. Stone and Woodward v. U.S., the U.S. Supreme Court effectively upheld the right of the American military to discharge gays and lesbians of the armed forces. (see May 17)

February 26, 2014:  in San Antonio, U.S. District Judge Orlando Garcia overturned the Texas ban on same-sex marriage ruling that the prohibition was unconstitutional and stigmatized the relationship of gay couples. The ruling did not allow same-sex couples to immediately marry because the judge stayed the injunction pending any appeal.

Garcia ruled that the state’s ban deprived same sex couples of due process and equal protection, stigmatizing their relationships and treating them differently from opposite-sex couples. “Today’s court decision is not made in defiance of the great people of Texas or the Texas Legislature, but in compliance with the U.S. Constitution and Supreme Court precedent,” Garcia said. (see Feb 27)

February 26, 2018: the US Court of Appeals for the Second Circuit in Manhattan ruled that federal civil rights law bars employers from discriminating based on sexual orientation.

The case, which stemmed from the 2010 dismissal of Donald Zarda, a Long Island sky-diving instructor, was a setback for the Trump Justice Department, whose lawyers found themselves in the unusual position of arguing against government lawyers from the Equal Employment Opportunity Commission.

The E.E.O.C. had argued that Title VII of the 1964 Civil Rights Act, which bars workplace discrimination based on “race, color, religion, sex or national origin,” protected gay employees from discrimination on the basis of sexual orientation.

But the Trump Justice Department took the position that the law did not reach sexual orientation, and said the E.E.O.C. was “not speaking for the United States.”

Zarda died in a jumping accident on October 3, 2014 in Switzerland after the suit was filed. (see Mar 6)

February 26, 2019:  the United Methodist Church voted to strengthen its ban on gay and lesbian clergy and same-sex marriages, a decision that could split the nation’s second-largest Protestant church.

After three days of intense debate at a conference in St. Louis, the vote by church officials and lay members from around the world doubled down on current church policy, which states that “the practice of homosexuality is incompatible with Christian teaching.” The vote served as a rejection of a push by progressive members and leaders to open the church to lesbian, gay, bisexual and transgender people.

Now, a divide of the United Methodist Church, which has 12 million members worldwide, appears imminent. Some pastors and bishops in the United States are already talking about leaving the denomination and possibly creating a new alliance for gay-friendly churches. (see Feb 27)

February 26, 1992: the Supreme Court of Ireland ruled that a 14-year-old rape victim may travel to England to have an abortion. (see Apr 5)

February 26, 1998: White House senior communications aide Sidney Blumenthal testified before the grand jury, answering questions about any role he may have played in spreading negative information about investigators in Independent Counsel Ken Starr’s office. Fourteen Democrats in the House write Attorney General Janet Reno complaining about subpoenas issued by Starr. A non-profit group that studies women in the workplace says it will contribute $10,000 as seed money for a legal defense fund for Lewinsky. (see Clinton for expanded story)

February 26, 2012: George Zimmerman, a neighborhood watch captain, shot and killed Trayvon Martin, 17. Zimmerman told police he fired in self-defense. Zimmerman confronted the teen after calling 911 and reporting Martin as a “suspicious person.” Though a dispatcher told Zimmerman not to follow the teen, Zimmerman confronted him nevertheless, police said. Martin died from a gunshot wound to the chest. (Stand Your Ground, see Mar 14; Trayvon, see Mar 21)

February 26, 2015: after months of debate, threats and uncertainty, recreational marijuana became legal in Washington, D.C., at least according to the city government. Adults 21 and over could legally use marijuana, possess up to two ounces and grow up to six marijuana plants in their homes for personal use. Marijuana sales remained illegal, but the District Council was considering a bill that would regulate and tax marijuana sales, similar to laws in Colorado and Washington state. Because of the city’s unique oversight by Congress, it was unclear if any measure legalizing marijuana sales and regulation could go into effect before 2016. (next Cannabis, see May 3 or see CCC for expanded chronology)

February 26, 2018:  in Washington v Sessions, Judge Alvin K. Hellerstein of Federal District Court in Manhattan tossed out a lawsuit that sought to make marijuana legal under federal law, ruling that the plaintiffs had failed to take the necessary first step of asking the Drug Enforcement Administration to remove cannabis from its list of dangerous substances.

The ruling was a defeat for the plaintiffs — among them a former professional football player who owns a company that sells pot-based pain relievers, a 12-year-old girl who treats her chronic epilepsy with medical marijuana and a nonprofit group that works on behalf of minorities in the marijuana industry. (next Cannabis, see Mar 27 or see CCC for expanded chronology)

On this date, the Seattle Times reported that Bellevue College had apologized after Gayle Colston Barge, vice president of institutional advancement altered a mural of two Japanese American children in a World War II incarceration camp by whiting out a reference to anti-Japanese agitation by Eastside businessman Miller Freeman and others in the artist’s accompanying description.

Bellevue President Jerry Weber’s letter of apology read, “It was a mistake to alter the artist’s work. Removing the reference gave the impression that the administrator was attempting to remove or rewrite history, a history that directly impacts many today … Editing artistic works changes the message and meaning of the work.”