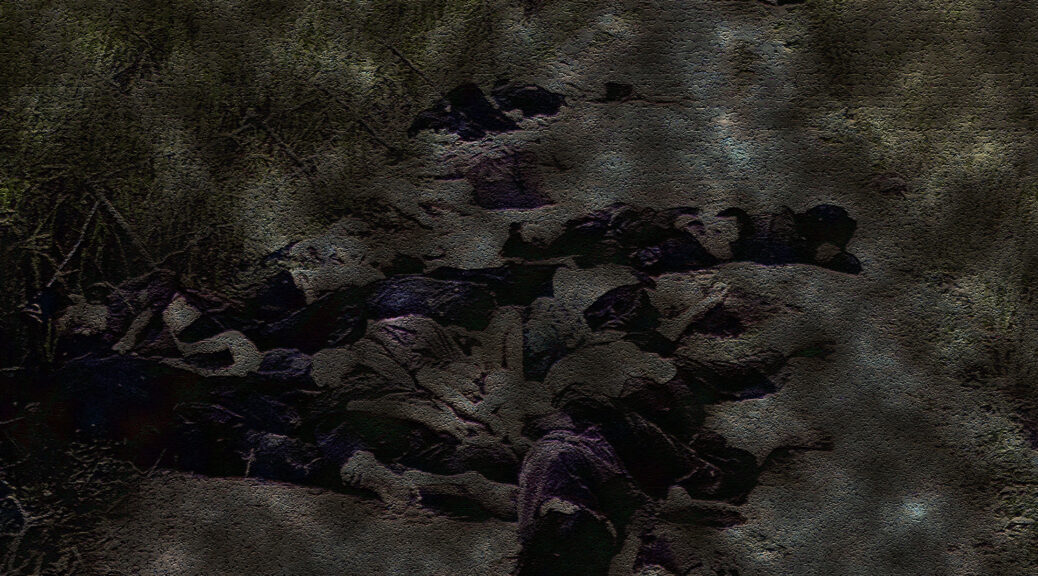 Charlie Company had departed  for Vietnam on December 1, 1967. The company was comprised of five platoons. Captain Ernest Medina had earned the nickname “Mad Dog” from his high expectations and his quick temper.

On January 30, 1968 the Viet Cong and North Vietnamese Army troops had launched the Tet Offensive attacking a hundred cities and towns throughout South Vietnam. Charlie Company was not involved.

Charlie Company continued to have limited contact with the enemy, but while on routine patrols men are injured or killed by landmines. Frustration developed.

On March 14, while on a patrol, a booby trap killed Sergeant George Cox. Two other GI’s were seriously injured. In one of the first documented instances of outright aggression, angry members of Charlie Company lashed out – while passing through a village troops shoot and killed a woman civilian working in a field.

On March 15, Captain Medina and the other commanders were briefed about increased intelligence that pointed to a small group of villages called My Lai as the haven for a Viet Cong battalion. This intelligence will later prove faulty.

The men were encouraged to be aggressive, that anyone they encounter will likely be the enemy as the residents of My Lai will be away at market.

The attack began. Troops did encounter some enemy. At…

The two lead platoons moved through the village and shot fleeing Vietnamese or bayonet others. They throw hand grenades into houses and bunkers and destroy livestock and crops.

The two platoons in the village rounded up approximately 20-50 civilians (mostly women, children and old men,) pushed them along trails to a dirt road south of the village, and placed them under guard. Another group of 70 civilians were moved to the east of the village.

Without pretext, soldiers begin bayoneting  or shooting the civilians. One GI pushed a man down a well and threw a grenade in after him. Over a dozen women and children praying by a temple were shot in the head.

Two soldiers come across a woman carrying an infant and walking with a toddler; they fire at her. An elderly woman is spotted running down a path with an unexploded M79 grenade lodged in her stomach. One soldier forces a woman around the age of 20 to perform oral sex on him while holding a gun to a four-year-old child’s head.

Lieutenant Calley reached the drainage ditch into which the civilians had been herded and gave the order to start killing them. Within ten minutes, all were shot down by members of the 1st Platoon. Witnesses to the shooting reported anywhere between 75 and 150 Vietnamese were killed. None of the Vietnamese were armed.

Warrant Officer Hugh Thompson was a helicopter pilot and part of the operation. Early on, he had radioed for medical help when he saw wounded civilians. When he flew over the same group later he realized that they were dead. At  9:40 AM the crew of Thompson’s observation helicopter watched as a small group of soldiers approached a young woman lying wounded on the ground. Thompson had previously marked this woman with smoke. A captain walked up to the woman, prodded her with his foot and shot her in the head. (This captain was later identified as Medina.)

Two days later Thompson was called in to report and he described what he saw as the unnecessary killing of civilians. After the meeting, Thompson was described as being furious at command’s lack of concern.

In an official report regarding the My Lai operation, a Lieutenant Colonel Barker concluded that the assault was successful: “This operation was well planned, well executed, and successful. Friendly casualties were light and the enemy suffered heavily. The infantry unit on the ground and helicopters were able to assist civilians in leaving the area in caring for and/or evacuating the wounded.”

The army sent Thompson out in increasingly dangerous situations. Thompson was shot down five times, the last occurred during a mission from Da Nang to an airbase at Chu Lai, which broke his back.

During this time, G.I. Ron Ridenhour began to hear stories from members of Charlie Company and was curious. By November 1968 Ridenhour was no longer in the Army and had returned home to Phoenix.

Ron Ridenhour’s information and requests for an official investigation finally yielded results and on April 23, 1969 the Office of the Inspector General began a full inquiry.

On September 10, NBC Correspondent Robert Goralski reported that Lieutenant Calley “has been accused of premeditated murder of a number of South Vietnamese civilians. The murders are alleged to have been committed a year ago and the investigation is continuing.” 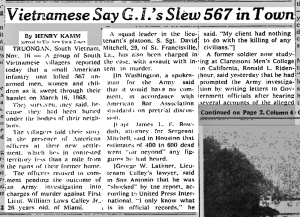 November 17, 1969. The New York Times ran a story that quoted survivors of the My Lai massacre, who claimed over 567 Vietnamese men, women, and children were killed by American soldiers.

December 5, 1969: photos of the massacre are published. On the CBS Evening News, Walter Cronkite issues a warning about the disturbing images for viewers before showing them. The horrific images immediately cause a country-wide uproar.

March 29, 1971: Calley (and only Calley) was found guilty of premeditated murder of 22 civilians and sentenced to life in prison. The sentence was controversial and generated public outcry. Draft board members resign, veterans turned in their medals, and the “Free Calley” movement was born. Georgian governor Jimmy Carter asked his constituency to drive for a week with their lights on in protest, and flags were flown at half-mast in the state of Indiana.

Fall 1971: Captain Medina was acquitted of all charges and Lieutenant Calley’s life sentence was reduced to 20 years.

March 6, 1998: Warrant Officer Thompson was recognized for his courage and honesty with the Soldier’s Medal. Thompson died on January 6, 2006.

August 20, 2009: for the first time Lieutenant Calley spoke publicly about My Lai. In front of the Kiwanis Club of Columbus, OH, he said, “There is not a day that goes by that I do not feel remorse for what happened that day in My Lai. I feel remorse for the Vietnamese who were killed, for their families, for the American soldiers involved and their families. I am very sorry.”

Dates are from PBS for the American Experience.