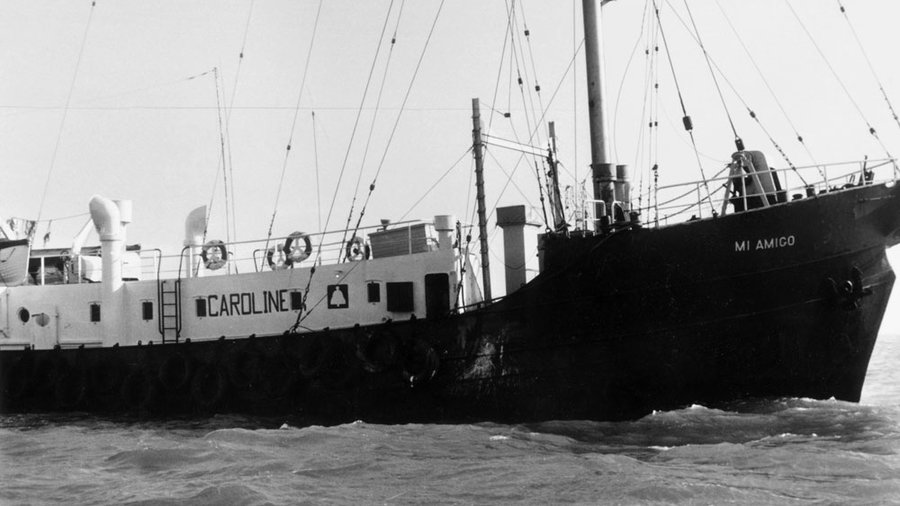 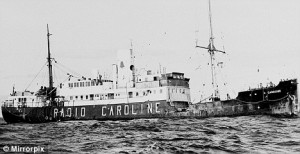 By March 1964, the Beatles had landed in the USA and Pied Pipered its youth. Of course “their” music was a reinterpretation of “our” music. Filled with sophomoric hubris, we did not realize that many of their (and other British Invasion hits) were covers of earlier American hits.

In stark contrast, British youth had a difficult time hearing any rock music on their radios because of the British government’s control of the airwaves. The British Broadcasting Corporation (BBC) limited their commercial-free stations to six hours of pop music a week!

The ironic characteristic about such radio is that it copied the style of commercial AM radio in the US. That is, top 40 format of rapid DJ patter and frequent commercials.

The approach was so successful that by 1967 ten pirate radio stations were broadcasting to an estimated daily audience of 10 to 15 million. Interestingly, the number of people listening to BBC stations did not decline indicating that the audience was a new one, one that the BBC had not had to begin with.

Reg Calvert, known widely as ‘Uncle Reg’, ran the popular Radio City station from an abandoned Second World War fort off the coast of Whitstable. His daughter, Susan Moore, had recently published a book that explores her father’s experiences. (Kent on line article)

Radio City broadcast from Shivering Sands, an abandoned fort in the Thames Estuary. The British had erected many of these metal tower forts during World War II  to protect the coastal sea lanes. By the early ’60, these towers provided an alternate choice for someone interested in setting up a pirate radio station.

Major Oliver Smedley was the former owner of another pirate station: Radio Atlanta. He and Calvert had a running feud about merging their operations, but Calvert felt Smedley was taking advantage of him.

He went to Smedley’s home. An argument ensued. Smedley shot and killed Calvert.

A jury found Smedley not guilty of manslaughter, accepting his claims of self-defense.

In 1987 the New York Times reported that  Allan Weiner and Randi Steele were the main persons of a group called Radio New York  International (RNI) that did the same thing of the coast of Long Island, NY.

The called their ship, The Sarah–several of the men had girlfriends by that name. The group felt that none of the local the land-based stations played the type of music they wanted–which included such anti-war rock as John Lennon’s “Give Peace a Chance,” Country Joe’s “I Feel Like I’m Fixin’ to Die Rag,” and Bruce Cockburn’s “If I Had a Rocket Launcher.”

On July 25, the Federal Communication Commission boarded the ship and told the group it had to shut down the station. The FCC said that they did not have a license and that it was using an already assigned frequency.

The government did eventually succeed in shutting down the station, but after RNI had sold the ship. The movie Blown Away used it and blew it up at the end of the movie.

Here is the raw footage of that 1993 explosion

Radio Caroline continued to broadcast though with limited hours until 1990, but had periods of years when it was off the air completely. The way that it and other pirate radio stations were able to continue was by using new technology to broadcast, moving to different locations, or using secret land-based locations.