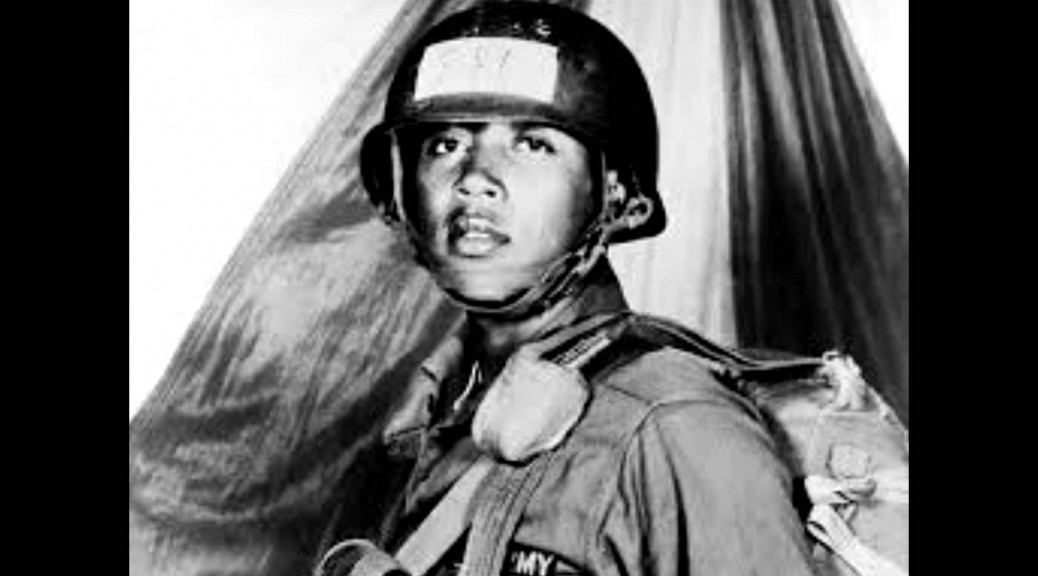 Milton L. Olive III and fellow members of the 3rd Platoon of Company B had been making their way through the jungles to locate Viet Cong operating in the area. As the soldiers pursued the enemy, a grenade was thrown into the middle of them. Olive grabbed the grenade and fell on it, absorbing the blast with his body.

His actions saved the lives of his platoon members. President Johnson presented the Medal of Honor to Olive’s parents on his behalf on April 21, 1966.

Milton L. Olive III was the first African-American Medal of Honor recipient of the Vietnam War. There would be an additional twenty-one African-Americans recipients. (There were 259 total.)

The citation read: “For conspicuous gallantry and intrepidity at the risk of his life above and beyond the call of duty. Pfc. Olive was a member of the 3d Platoon of Company B, as it moved through the jungle to find the Viet Cong operating in the area. Although the platoon was subjected to a heavy volume of enemy gunfire and pinned down temporarily, it retaliated by assaulting the Viet Cong positions, causing the enemy to flee. As the platoon pursued the insurgents, Pfc. Olive and 4 other soldiers were moving through the jungle together with a grenade was thrown into their midst. Pfc. Olive saw the grenade, and then saved the lives of his fellow soldiers at the sacrifice of his by grabbing the grenade in his hand and falling on it to absorb the blast with his body. Through his bravery, unhesitating actions, and complete disregard for his safety, he prevented additional loss of life or injury to the members of his platoon. Pfc. Olive’s extraordinary heroism, at the risk of his life above and beyond the call of duty are in the highest traditions of the U.S. Army and reflect great credit upon himself and the Armed Forces of his country.”

Below is a link to a sound file with President Lyndon B Johnson’s remarks at the ceremony. He began those remarks with the following words:

There are occasions on which we take great pride, but little pleasure. This is one such occasion. Words can never enlarge upon acts of heroism and duty, but this Nation will never forget Milton Lee Olive III.

President Harry Truman once said that he would far rather have won the Medal of Honor than to have been the President of the United States. I know what he meant. Those who have earned this decoration are very few in number. But true courage is very rare. This honor we reserve for the most courageous of all of our sons.

The Medal of Honor is awarded for acts of heroism above and beyond the call of duty. It is bestowed for courage demonstrated not in blindly overlooking danger, but in meeting it with eyes clearly open.

And that is what Private Olive did. When the enemy’s grenade landed on that jungle trail, it was not merely duty which drove this young man to throw himself upon it, sacrificing his own life that his comrades might continue to live. He was compelled by something that’s more than duty, by something greater than a blind reaction to forces that are beyond his control.

The video of the narration/music at top of this entry