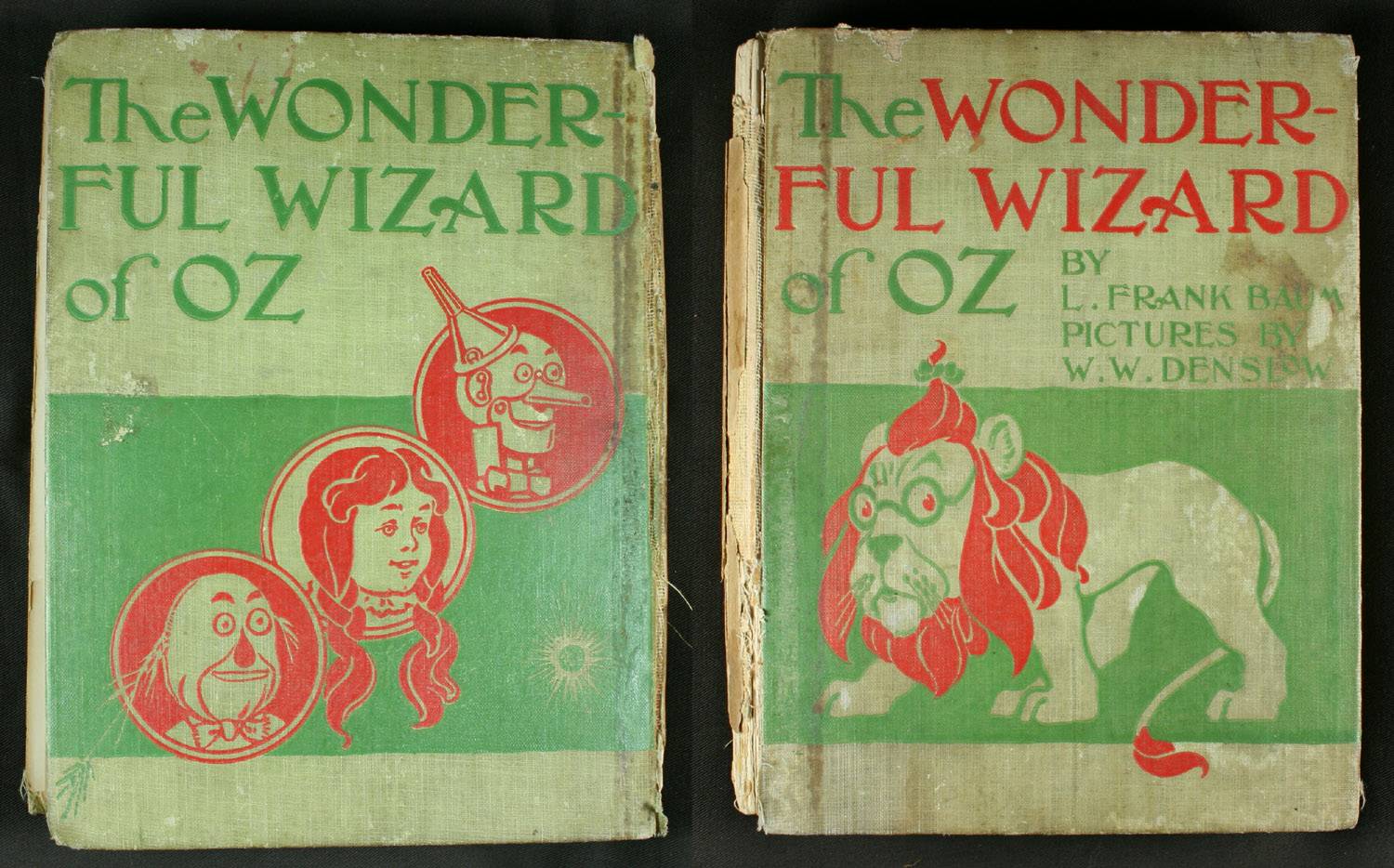 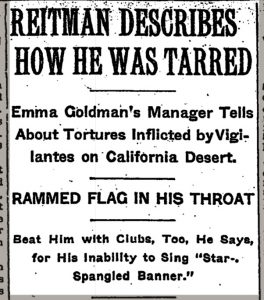 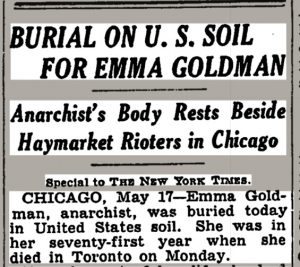 May 17, 1940: Goldman buried in Waldheim Cemetery, Chicago, close to the Haymarket memorial (see May 4, 1886) .  In an address delivered at the burial, Jacob Siegel, editor of The Jewish Daily Forward, said, “Emma Goldman was a rebel all her life against injustices, until after the last war, when a change took place in her philosophy and mode of living. Were she living today, Emma Goldman would be assisting in the present human effort to destroy Hitlerism.” (NYT article) (see Goldman for expanded story)

May 17, 1937: Attorney General Thomas Knight died. His proposed compromise was never carried out in full by the state because the new acting attorney general feared “looking soft” on rape.(see Scottsboro for expanded story)

May 17, 1954: the Supreme Court unanimously ruled in Brown v. Board of Education of Topeka, Kans that segregation in public schools was unconstitutional. The ruling paved the way for large-scale desegregation. The decision overturned the 1896 Plessy v. Ferguson ruling that sanctioned “separate but equal” segregation of the races. The Brown decision ruled that “separate educational facilities are inherently unequal.” It was a victory for NAACP attorney Thurgood Marshall, who later become the first black US Supreme Court justice. (BH & SD, see May 27; James Meredith, see, July 28, 1962)

May 17, 1957: a crowd of over 30,000 nonviolent demonstrators gathered at the Lincoln Memorial in Washington, D.C., to commemorate the third anniversary of the landmark Brown v. Board of Education ruling.

In addition to celebrating the anniversary of the Supreme Court’s decision to end segregation in public education, the Prayer Pilgrimage also dramatized and politicized the failure of most Southern states to work toward or implement the court-ordered desegregation of their schools. The program featured addresses, prayers, songs and scripture recitations by Mahalia Jackson, Roy Wilkins and Mordecai Johnson, as well as Martin Luther King Jr.’s first address before a national audience. The march earned the distinction of being the largest organized demonstration for civil rights and was instrumental in laying the groundwork for future marches on the nation’s capitol. (BH, see Aug 29; SD, see Sept 9)

May 17, 1961: The Nashville Student Movement sent a new group of Riders to Birmingham, AL, where Public Safety Commissioner Bull Connor arrested and jailed them. (see May 18)

May 17, 1967: the jury returned a verdict of guilty. Whitmore was taken into custody for a psychiatric examination as required by state law. If he law did not so require, Justice Julius Helf stated, he would have continued Whitmore’s bail. (next BH, see May 29; see Whitmore for expanded story)

May 17, 1982: The US Court of Appeals for the 11th Circuit ruled that Alabama could not prosecute an FBI informer in the 1965 slaying of Viola Luizzo. The ruling affirmed an order by a lower court permanently prohibiting prosecution of Gary Thomas Rowe Jr. for her murder. Mr. Rowe testified against three Ku Klux Klansmen who were convicted of violating Liuzzo’s civil rights. (see Liuzzo for expanded story)

May 17, 1990: Joseph Fama, the 19-year-old white man from the Bensonhurst section of Brooklyn, was convicted of the racial killing of Yusuf K. Hawkins , the 16-year-old black youth who went to the mostly white neighborhood to help a teen-age friend shop for a used car. (see August 23, 1989)

Fama was convicted of second-degree murder for killing Hawkins ”with depraved indifference for human life” and a series of lesser charges. He was sentenced to 32 years in prison. Five other participants were charged in connection with Hawkins’s murder and received lesser sentences. (see Dec 17)

May 17, 2017: a Tulsa, OK jury acquitted Tulsa police Officer Betty Shelby in the shooting death of Terence Crutcher, an unarmed black man. (B & S, see May 30)

May 17, 1955: Princeton University students played the Bill Haley hit record Rock Around the Clock simultaneously from their dorm rooms. News reports indicated that it really wasn’t a “riot,” but university administrators were apparently not happy, since four students were later suspended “indefinitely.”  Blackboard Jungle, the film that opens with the song, was banned in several cities because of its alleged immoral influence on juveniles (and, apparently, Princeton University students). It was banned in Memphis, Tennessee, on March 28, 1955, and withdrawn as the U.S. entry in the Venice Film Festival on August 28, 1955. (next FoR, see Aug 21)

May 17, 1963: the first Monterey Folk Festival took place over three days in Monterey, California. The festival featured Joan Baez, Bob Dylan and Peter Paul and Mary. Baez, had a home in Carmel Highlands, was a huge star at the time, while Dylan was a still a newcomer making a name for himself.

Dylan was not treated kindly by that Monterey audience, who had come to see more traditional folks acts such as Peter, Paul and Mary (who ironically had a hit that summer with Dylan’s “Blowin’ in the Wind”), the Weavers and the New Lost City Ramblers. As described in the excellent book about that era, David Hajdu’s “Positively 4th Street,” “The Monterey audience, which was largely unfamiliar with Dylan’s style, responded poorly, talking loudly over his singing.”

“He went over very badly,” said Barbara Dane, the festival’s host, in Hajdu’s account. “He didn’t play very long, and it felt like he was on for an hour. I think people were laughing.” Even though he did three of his hardest-hitting protest songs, “Talkin’ John Birch Paranoid Blues,” “A Hard Rain’s A-Gonna Fall” and “Masters of War,” the response was so bad it prompted Baez to walk out unannounced and admonish the audience. “She wanted everyone to know, she said, that this young man had something to say,” Hajdu wrote. “He was singing about important issues, and he was speaking for her and everyone who wanted a betterworld. They should listen, she said — she ordered them, nearly:Listen!” They performed Dylan’s “With God on Our Side” together, their voices an odd match, “salt pork and meringue,” but Hadju wrote, “the tension between their styles made their presence together all the more compelling.” They left the stage with “people cheering.” (see May 27)

May 17, 1965: Hancock released his fifth album, Maiden Voyage. It is a concept album aimed at creating an oceanic atmosphere.

May 17, 1965: the FBI had launched a formal investigation in 1964 into the supposedly pornographic lyrics of the song “Louie, Louie.” That investigation finally neared its conclusion on this day in 1965, when the FBI Laboratory declared the lyrics of “Louie Louie” to be officially unintelligible. (see FBI for expanded story; Teenage Culture, see January 8, 1966; next FoR, see March 26, 1867)

May 17, 1967: D A Pennebaker’s film, Dont Look Back, first shown publicly at the Presidio Theater in San Francisco. (see Dec 27)

May 17, 1972: deportation hearings for John Lennon Yoko Ono, closed with Lennon telling the Immigration Service inquiry officer: “I don’t know if there’s any mercy to plead for because this isn’t a Federal Court. But if there is, I’d like it, please.” (see John for expanded story)

The law had made it “unlawful for any teacher in any of the Universities, Normals and all other public schools of the State which are supported in whole or in part by the public school funds of the State, to teach any theory that denies the story of the Divine Creation of man as taught in the Bible, and to teach instead that man has descended from a lower order of animals.” (Religion, see November 12, 1968; Separation, see Sept 1) 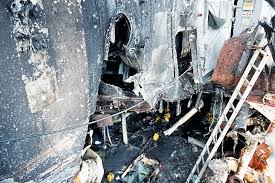 May 17, 1990: the World Health Organization removed homosexuality from its list of diseases.

May 17, 2004: Massachusetts became the first state to legalize gay marriage. The court finds the prohibition of gay marriage unconstitutional because it denies dignity and equality of all individuals. In the following six years, New Hampshire, Vermont, Connecticut, Iowa and Washington D.C. will follow suit. (see July 14) 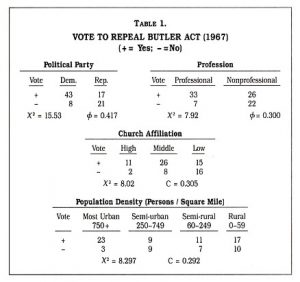 May 17, 1995: the North Carolina General Assembly repealed the Speaker Ban Law, which had been essentially unenforceable for 27 years. (see February 27, 1997)

May 17, 2004: the Supreme Court decided the Tennessee v. Lane case in which individuals sued the state of Tennessee for failing to ensure that courthouses are accessible to people with disabilities. One plaintiff had been arrested when he refused to crawl or be carried up stairs. The state argues that they cannot be sued under Title II of the ADA. The Supreme Court decided in favor of people with disabilities ruling that Tennessee could be sued for damages under Title II for failing to provide access to the courts. (see November 15, 2006)

May 17, 2012: NYC Police Commissioner Raymond Kelly sent a letter to Speaker Christine Quinn outlining changes to the NYPD’s stop-and-frisk policy, including changes to training and supervision. (see May 20, 2012)

The policy was a return to one instituted in 1988 by President Ronald Reagan that required abortion services to have a “physical separation” and “separate personnel” from other family planning activities. That policy is often described as a domestic gag rule because it barred caregivers at facilities that received family planning funds from providing any information to patients about an abortion or where to receive one.

May 17, 2019: the Trump administration identified at least 1,712 migrant children it may have separated from their parents in addition to those separated under the “zero tolerance” policy.

U.S. District Court Judge Dana Sabraw had ordered the Trump administration to identify children separated before the zero tolerance policy went into effect in May 2018, resulting in the separation of over 2,800 children. Sabraw had previously ordered those migrant families to be reunited, but the additional children were identified afterward when the Inspector General for Health and Human Services estimated “thousands more” may have been separated before the policy was officially underway, NBC News reported.