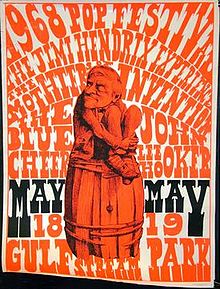 From Wikipedia: The first Miami Pop event …was originally publicized on promotional materials as the “1968 Pop and Underground Festival,” and “The 1968 Pop Festival”. An estimated 25,000 people attended this event, which was promoted by Richard O’Barry and Michael Lang, later famous as promoter of Woodstock. Bands featured at the festival included The Jimi Hendrix Experience, The Mothers of Invention, Blue Cheer, Chuck Berry, John Lee Hooker and The Crazy World of Arthur Brown. The opening act on Saturday was a little-known group called The Package, and the closing act was The Jimi Hendrix Experience. Originally scheduled as a two-day event, Sunday’s concert was rained out. But there was at least one beneficial result – it inspired Hendrix to write “Rainy Day, Dream Away.” 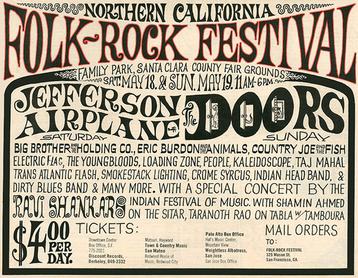 From Wikipedia: “Tighten Up” was written by Archie Bell and Billy Buttier. It was one of the first songs that Archie Bell & the Drells recorded, in a session in October 1967 at the Jones Town Studio in Houston, Texas, along with a number of songs including “She’s My Woman”. The instrumental backing for “Tighten Up” was provided by the T.S.U. Toronadoes, the group which had developed it[3] in their own live shows before they brought it to Archie Bell & the Drells at the suggestion of Skipper Lee Frazer, a Houston disk jockey who worked with both groups. At the recording session, the Drells worked late into the night with the Toronadoes as Archie Bell perfected the vocals. 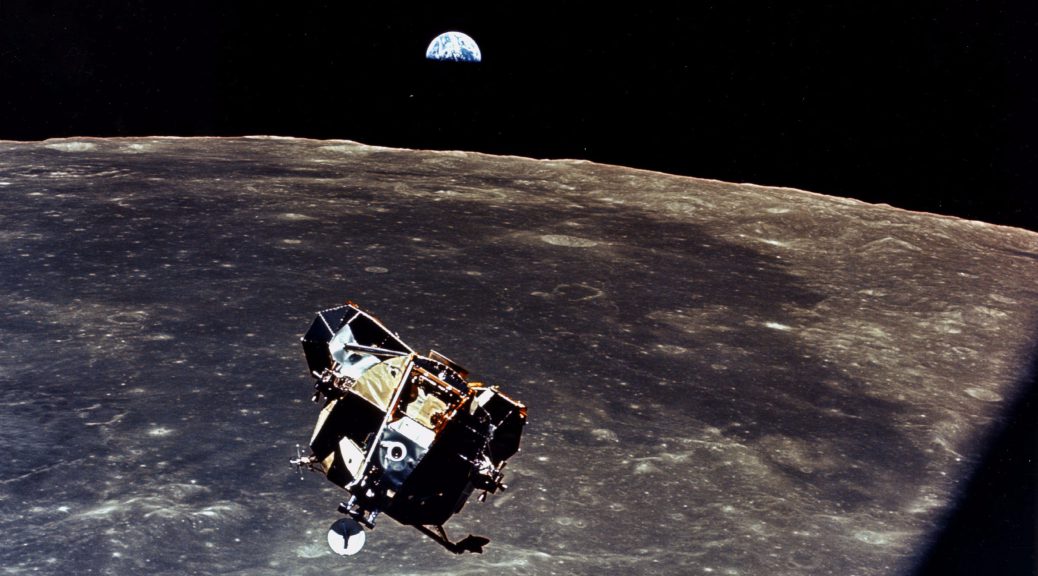 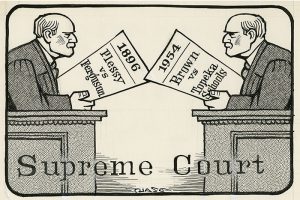 May 18, 1896: in Plessy v. Ferguson the US Supreme Court upheld the constitutionality of state laws requiring racial segregation in public facilities under the doctrine of “separate but equal”. Thus the Supreme Court denied Homer Plessy’s challenge to the law. “The object of the Fourteenth Amendment was undoubtedly to enforce the absolute equality of the two races before the law,” wrote Justice Henry Billings Brown, “but in the nature of things it could not have been intended to abolish distinctions based upon color, or to enforce social, as distinguished from political, equality, or a commingling of the two races upon terms unsatisfactory to either.” Only one justice dissented, John Harlan, who contended that the decision “will not only stimulate aggressions, more or less brutal and irritating, upon the admitted rights of colored citizens, but will encourage the belief that it is possible, by means of state enactments, to defeat the beneficent purposes which the people of the United States had in view when they adopted the recent amendments of the Constitution.” [Cornell Law article] (next BH, see July 1896; SD, see May 17, 1954; Plessy, see January 5, 2022)

May 18, 1918: Hampton Smith was a farmer in Valdosta, Georgia. He often He found labor by paying fines and then forcing the person to work on his farm. He was notorious for abusing those workers. On May 16, someone killed him. A Sidney Johnson was a suspect. During the  manhunt for Johnson, at least 13 people were killed. Among those killed was Hayes Turner, who was seized from custody after his arrest on the morning of May 18, 1918, and lynched. (next BH & Lynching, see May 19; for expanded chronology, see American Lynching 2)

May 18, 1961: Bull Connor ordered the jailed Riders from Birmingham to the Tennessee border in the middle of the night, dropping them off in the tiny town of Ardmore, AL and instructed them to take a train home. (see May 19) 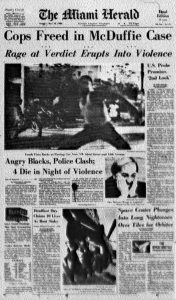 May 18, 1980: an all-white jury found the officers not guilty of killing Arthur McDuffie (see December 27. 1979) and violence broke out across Miami, sparking nine days of riots more violent than those of the 1960s. The National Guard responded and a state of emergency was declared. The riots left 57 dead, more than 1400 arrested, and $125 million in property damage. [Miami Herald article] (BH, see Dec 31; RR, see February 20, 1987)

May 18, 1896: the Supreme Court decided that the individual rights protections, which limit federal, and later, state governments, do not apply to tribal government. It reaffirmed earlier decisions, such as the 1831 Cherokee Nation v. Georgia case (see March 18, 1831) that gave Indian tribes the status of “domestic dependent nations,” the sovereignty of which is independent of the federal government. [Justia dot com article] (see January 23, 1907) 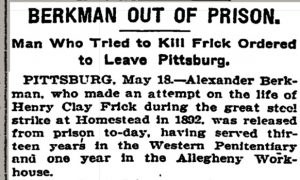 May 18, 1906: Alexander Berkman (see September 19, 1892), who had attempted to kill Henry Clay Frick during the steel strike at Homestead, PA in 1892, was released from prison having served thirteen years in the Western Penitentiary and one year in the Allegheny Workhouse of his 22-year sentence. [PBS article] (see May 26, 1906) 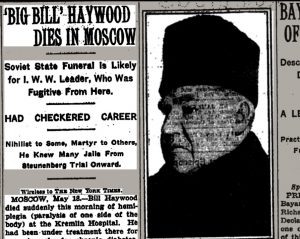 May 18, 1928: William “Big Bill” Haywood – founding member of the Industrial Workers of the World, member of the Executive Committee of the Socialist Party of America, secretary of the Western Federation of Miners, and an advocate of industrial unionism –died at the Kremlin Hospital. He had been under treatment there for several weeks for chronic diabetes, which improved, but which was followed a month ago by the first attack of hemiplegia. He had fled to the Soviet Union after having been found guilty and sentenced to 20 years in prison under the Espionage Act of 1917. (PDF of NYT obit)

In 1930: journalist H. L. Mencken petitioned the U.S. Department of State to revoke Goldman’s deportation and grant her a visitor’s visa. He also requested that the Department of Justice return her personal papers seized in the 1917 raid on the Mother Earth office, to no avail. (see Goldman for expanded story) 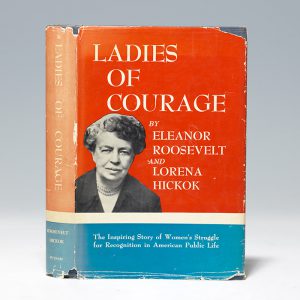 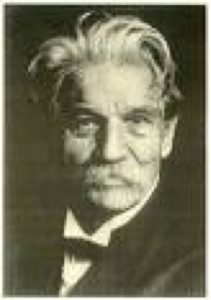 May 18, 1957: the Saturday Review magazine published “A Declaration of Conscience” by Albert Schweitzer. “The end of further experiments with atom bombs would be like the early sunrays of hope which suffering humanity is longing for.”  (NN, see July 29; Red Scare, see Aug 1)

The festival featured Country Joe and the Fish, The Animals, Jefferson Airplane, The Doors, Big Brother and the Holding Company, The Youngbloods, Electric Flag, Kaleidoscope, Taj Mahal, and Ravi Shankar. And although not mentioned in the promotional material, Grateful Dead also performed. (see Aug 3 & 4)

May 18, 1964: the Committee on Public Health of the New York Academy of Medicine issued a report stating that homosexuals had gone beyond the plane of defensiveness and argued that their “deviancy” was “a desirable, noble, preferable way of life.”  (see June 20) 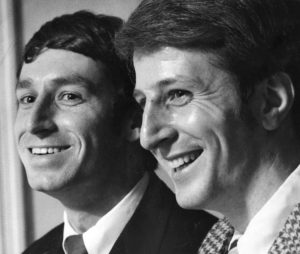 May 18, 1965: President Johnson said that 530,000 of “poverty’s children” would be given a head start in pre-school guidance centers so they won’t already be doomed to fail because of family backgrounds when they start school. More than half the estimated one million disadvantaged children expected to start school next fall will take part in the first summer sessions of Project Head Start. … The program calls for teaching the children things that most people take for granted. Some of the children have never seen a book, a flush toilet or electric lights. They also would receive medical and dental care. [Head Start site]

May 18, 1966: U.S. Marines faced off against pro-Buddhist ARVN soldiers at a bridge near Da Nang.  A few shots were exchanged and the ARVN soldiers attempted to blow up the bridge. General Lewis William Walt, the commander of the U.S. Marines in South Vietnam, was present and directed the Marines to secure the bridge (V & SVL, see May 24)

May 18 – 26, 1969: Apollo 10 utilized both the command-service module and the Lunar Module around the moon. Tom Stafford and Gene Cernan descended to within 50,000 feet of the surface of the moon. [NASA article] (see July 16)

May 18, 2015: the U.S. Supreme Court chose not to rule on whether the Americans with Disabilities Act applied during police encounters the same day the court said it would not consider a closely-watched special education case.

In a ruling, the high court failed to address key questions about the implications of the ADA in situations involving law enforcement. At issue was the case of Teresa Sheehan, a woman with mental illness who was living in a San Francisco group home. Police were called when Sheehan threatened to kill her social worker. The responding officers initially retreated from Sheehan’s room when she brandished a knife, but they then re-entered the room and shot her multiple times when she continued to confront them with the knife. Sheehan survived and sued the officers alleging that they violated her Fourth Amendment rights by entering her room without a warrant and she alleged violations of the ADA arguing that they did not accommodate her disability when they chose to enter her room a second time.

The court ruled that Sheehan cannot hold the officers liable for her injuries because they acted legally when they entered her room and their use of force was “reasonable.” However, the justices declined to address the ADA issue because attorneys for the city of San Francisco changed their position on the matter. Initially, city attorneys suggested that the ADA did not apply to police at all, but in arguments before the Supreme Court earlier this year conceded that the law applied generally, but not in circumstances where a suspect is “armed and violent.”

Accordingly, Justice Samuel Alito wrote in the court’s opinion that the justices did not decide on the ADA issue because it hadn’t been completely addressed by the lower courts. [LA Times article] (4th, see June 22; ADA, see May 21)

May 18, 2021:  the International Energy Agency issued a detailed road map of what it would take for the world’s nations to slash carbon dioxide emissions to net zero by 2050. That would very likely keep the average global temperature from increasing 1.5 Celsius above preindustrial levels — the threshold beyond which scientists say the Earth faces irreversible damage.

Nations around the world would need to immediately stop approving new coal-fired power plants and new oil and gas fields and quickly phase out gasoline-powered vehicles if they want to avert the most catastrophic effects of climate change.

While academics and environmentalists have made similar recommendations before, this is the first time the International Energy Agency has outlined ways to accomplish such drastic cuts in emissions.  [NYT article] (next EI, see May 24)