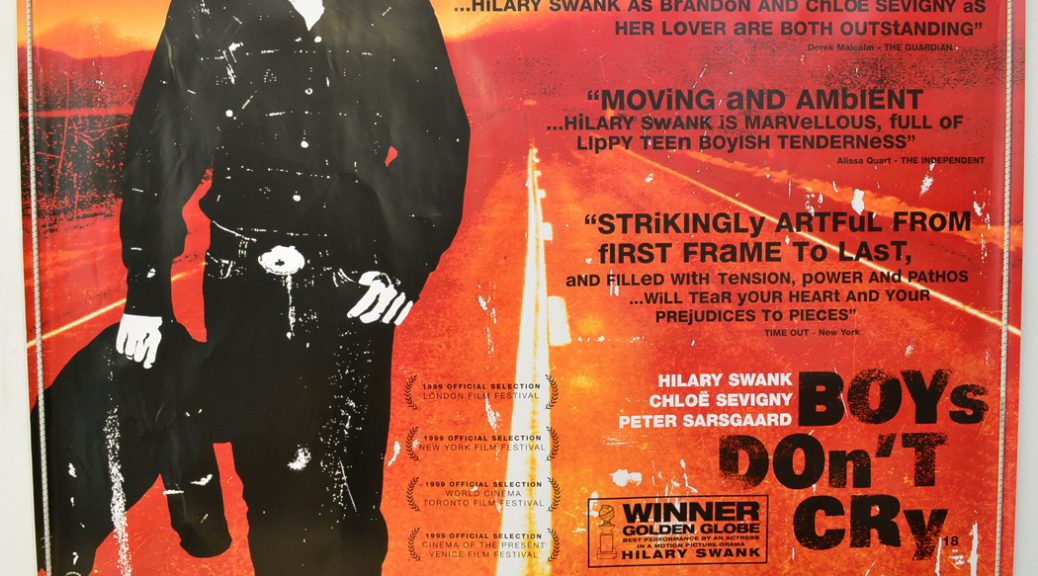 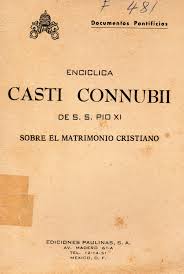 December 31, 1930: Pope Pius XI promulgated the papal encyclical entitled Casti Connubii (“of chaste wedlock”). It prohibited Catholics from using any form of artificial birth control and reaffirmed the prohibition on abortion. The encyclical stated, in part: “ . . . any use whatsoever of matrimony exercised in such a way that the act is deliberately frustrated in its natural power to generate life is an offense against the law of God and of nature, and those who indulge in such are branded with the guilt of a grave sin.” (see April 6, 1931)

December 31, 2013: Supreme Court Justice Sonia Sotomayor granted a last-ditch plea from Catholic groups to block a birth control mandate in the new health care law for religious organizations, just hours before it was to have gone into effect. Sotomayor issued the stay at the request of an order of Catholic nuns in Colorado, the Little Sisters of the Poor Home for the Aged. They are part of a larger effort by Catholic-affiliated groups from around the nation to halt provisions of the Affordable Care Act that require companies — regardless of religious beliefs — to provide contraceptives to their employees. The groups want the mandate halted while the court considers a legal challenge, brought by the for-profit company Hobby Lobby, arguing that the requirement violates their religious liberties. [NYT report] (WH, see January 3, 2014; ACA, see June 30, 2014)

December 31, 1964: in an attempt to recover the four American bodies killed in the helicopter crash, 12 South Vietnamese soldiers were killed in an ambush. The bodies will be recovered, but only after 196 South Vietnamese Marines died in the resulting fire fights. [Wiki article] (see January 1 – February 7, 1965) 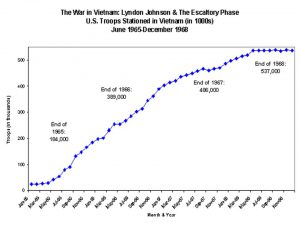 Estimates from Headquarters U.S. Military Assistance Command Vietnam indicated that 181,150 Viet Cong and North Vietnamese were killed during the year. However, Allied losses were also up: 27,915 South Vietnamese, 14,584 Americans (a 56 percent increase over 1967), and 979 South Koreans, Australians, New Zealanders, and Thais were reported killed during 1968. Since January 1961, more than 31,000 U.S. servicemen had been killed in Vietnam and over 200,000 U.S. personnel had been wounded. (see 1968 Vietnam War for more) (next Vietnam, see January 16, 1969) 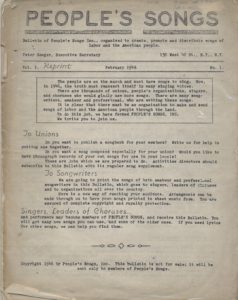 December 31, 1945: Pete Seeger, Alan Lomax, and Lee Hays founded People’s Songs. They published the first quarterly edition in February 1946. In it, Seeger wrote: “The people are on the march and must have songs to sing. Now in 1946, the truth must reassert itself in many singing voices. There are thousands of unions, people’s organizations, singers and choruses who would gladly use more songs. There are many songwriters, amateur and professional, who are writing these songs. It is clear that there must be an organization to make and send songs of labor and the American people through the land. To do this job we formed People’s Songs, INC. We invite you to join us.” (see News Music for more about NM) 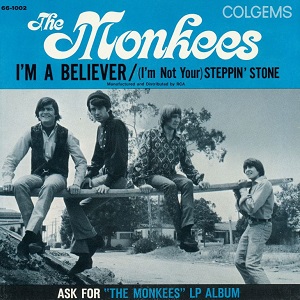 December 31, 1970:  Paul McCartney sued the other three Beatles to dissolve the partnership and gain control of his interest. The suit touched off a bitter feud between McCartney and the others, especially his co-writer on many of the Beatles compositions, John Lennon. (see Beatles Officially Legally End) (next Beatles, see (see April 9, 1971) 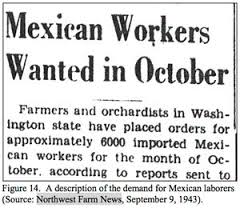 December 31, 1964: the Mexican Farm Labor Program, also known as the Bracero Program, ended. It  was the result of a series of agreements between Mexico and the United States in response to the demand for agricultural labor during World War II. The Mexican workers were called braceros because they worked with their arms and hands (bracero comes from the Spanish brazo, or arm). The bilateral agreement guaranteed prevailing wages, health care, adequate housing, and board. … Nationally, the Bracero Program continued until December 31, 1964, with nearly 4.5 million Mexicans making the journey during the program’s twenty-two year existence. Braceros entered the United States under six-month to twelve-month contracts and were assigned to regions throughout the country. Once the contract expired, each bracero was required to return to Mexico and sign another contract in order to return to the United States to work.  (Immigration, see October 3, 1965; Labor, see February 26, 1965)

December 31, 2018: “An all concrete Wall was NEVER ABANDONED, as has been reported by the media,” President Trump tweeted ahead of New Year’s Eve. “Some areas will be all concrete but the experts at Border Patrol prefer a Wall that is see through (thereby making it possible to see what is happening on both sides). Makes sense to me!”

The president was evidently reacting to a Los Angeles Times interview in which Kelly said, “To be honest, it’s not a wall.”

“The president still says ‘wall’ – oftentimes frankly he’ll say ‘barrier’ or ‘fencing,’ now he’s tended toward steel slats. But we left a solid concrete wall early on in the administration, when we asked people what they needed and where they needed it,” Kelly told the Times. (IH & TW, see January 5, 2019) 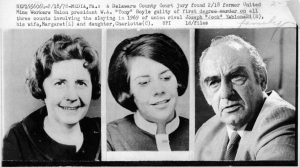 December 31, 1969: Joseph A. Yablonski, an unsuccessful candidate for the presidency of the United Mine Workers of America, was shot to death with his wife and daughter in their Clarksville, Pa., home by hitmen acting at the orders of UMWA president Tony Boyle. (see January 22, 1970)

December 31, 1990: in a move intended to speed his transfer from Tennessee to Mississippi, Byron de la Beckwith was arrested on a governor’s warrant charging him with first-degree murder and was jailed without bond. (NYT article) (next BH & Evers, see January 14, 1991)

December 31, 1993: Brandon Teena, a 21-year-old female-born transgender, was slain along with two other people at a farmhouse near Humboldt, Neb. Convicted murderer John Lotter is on Nebraska’s death row; co-defendant Thomas Nissen is serving a life sentence. The case inspired the 1999 movie “Boys Don’t Cry.” (next LGTBQ see May 20, 1996)

December 31, 1998: a group of former students from the Fernald School in Waltham, Mass. who ate radioactive oatmeal as unwitting participants in a food experiment in 1953 shared a $1.85 million settlement from Quaker Oats and the Massachusetts Institute of Technology. [CBS News report] 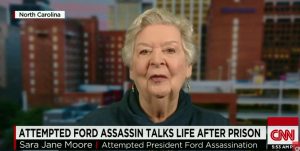 December 31, 2013: the Archdiocese of St. Louis was ordered to release the names of priests accused of sex abuse throughout the past 20 years. The priests’ names will not be made public, but will remain sealed and will only be seen by the plaintiff and her lawyer in an ongoing civil case against the Archdiocese. (see February 5, 2014)

December 31, 2013: Judge Mary S. Scriven of the United States District Court in Orlando struck down as unconstitutional a Florida law that required welfare applicants to undergo mandatory drug testing, setting the stage for a legal battle that could affect similar efforts nationwide.

Scriven held that the testing requirement, the signature legislation of Gov. Rick Scott, a Republican who campaigned on the issue, violated the protection against unreasonable searches.

“The court finds there is no set of circumstances under which the warrantless, suspicionless drug testing at issue in this case could be constitutionally applied,” she wrote. The ruling made permanent an earlier, temporary ban by the judge.

Mr. Scott, who had argued that the drug testing was necessary to protect children and ensure that tax money was not going to illegal drugs, said that the state would appeal the ruling. (see June 25, 2014)

December 31, 2014: Maryland Governor Martin O’Malley commuted the death sentences of the last four inmates remaining on death row, effectively ending capital punishment in the state. Maryland lawmakers had voted two years ago to abolish the death sentence for future offenders beginning 2013. O’Malley said that leaving the last four prisoners to await the death penalty “does not serve the public good….In a representative government, state executions make every citizen a party to a legalized killing as punishment.” (see January 15, 2015)

December 31, 2016: according to a year-end study from the Death Penalty Information Center, the number of executions reached its lowest point in a quarter-century because the inability of States to buy lethal drugs,. The study found that executions went from a high of 98 in 1998, to only 20 in 2016. 2016 was also the fewest death penalty sentences since 1972, when the US Supreme Court case of Furman v Georgia led to a four-year-long moratorium on capital punishment sentencing. There were approximately 30 death sentences in 2016, down 90% since 1996. (see February 22, 2017) 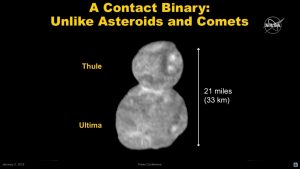 December 31, 2019: North Korea’s its official media reported  that leader, Kim Jong-un, ​said his country no longer felt bound by its self-imposed moratorium on testing nuclear weapons and long-range ballistic missiles, the strongest indication yet that the country could soon resume such tests. [NYT article] (next N/C N, see January 5, 2020)

December 31, 2019: Francis Collins, director of the National Institutes of Health (NIH), said that marijuana’s status as a Schedule I drug inhibits studies into the plant and prevents scientists from researching the effects of cannabis that consumers were obtaining from state-legal dispensaries in a growing number of states.

Collins discussed the limitations imposed by the federal drug scheduling system during an appearance on C-SPAN’s Newsmakers saying that while he shares concerns about the potential health implications of smoking marijuana, research into the risks and benefits of cannabis is being impeded by current policy.

“Frankly, we know far too little about the benefits and risks of smoked marijuana,” Collins said. “There have been very few studies that have actually rigorously tested that.” [MM article]

December 31, 2019: one day before legal recreational marijuana sales launched in Illinois, Gov. J. B. Pritzker (D announced that his office was clearing the records of more than 11,000 people who had previously been convicted of simple cannabis possession.

Gov Pritzker said the move “sets us apart” from other states that have legalized marijuana for adult-use and that “Illinois is putting equity first, clearing thousands of convictions and giving individuals & their families a new lease on life.” [MM article] (next C, see, January 1, 2020; see CCC for expanded chronology)