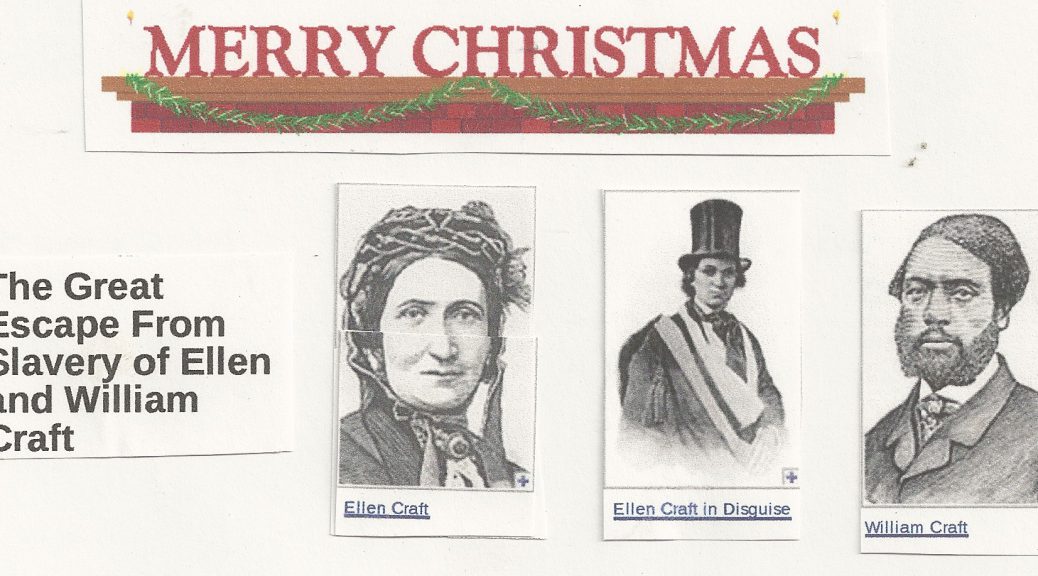 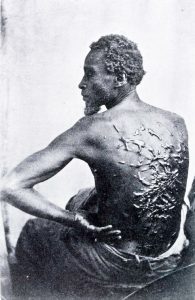 In the past, US history books certainly included the fact that the US once allowed humans to be bought and sold as property, yet at the same time those books excluded the fact that slaves never stopped trying to escape and often organized revolts against their involuntary servitude.

Methods of escape were always desperate but often ingenious. One, Henry “Box” Brown, mailed himself north in a wooden crate. 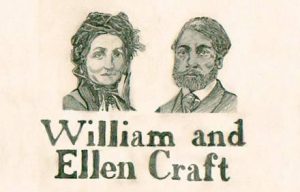 William was born in Macon, Georgia to a master who sold off Craft’s family to pay gambling debts.  William’s new owner, a local bank cashier, apprenticed him as a carpenter in order to earn money from William’s labor.

Ellen Craft was born in Clinton, Georgia and was the daughter of an African American biracial slave and her white owner.  Because of her light complexion, strangers often mistook Ellen as white. Bothered by such a situation, Ellen’s plantation mistress sent the 11-year-old Ellen to Macon to the mistress’s daughter as a wedding present in 1837, where Ellen served as a ladies maid.

It was in Macon that William and Ellen met.

In 1846 their owners allowed Ellen and William to marry, but they could not live together since they had different owners. Obviously unhappy with that forced separation and the fear that their masters could sell any children, the couple started to save some of the meager wages their owners allowed them to keep and William and Ellen planned an escape.

In December 1848, they attempted just that. Because they were “good” slaves, their masters permitted them passes for a few days leave at Christmastime. Those days would give the couple time to be missing without notice.

As it was not customary for a white woman to travel with a black male servant, they decided that they would escape by traveling as a white male and his black servant.

On December 21, 1848, William cut Ellen’s hair and put her right arm in a sling.  Not being able to read or write, but knowing others would ask Ellen, the “white male” to sign papers at check points along their way, an injured arm prevented signatures.

They had to travel separately the whole worrisome journey with constant fear that someone would see through their ruse and reveal them.

That fear was almost realized several times, but they nonetheless arrived in Philadelphia on Christmas day, 1848.

The Crafts moved on to Boston, which had an established free black community and a well-organized, protective abolitionist activity. William, a skilled cabinetmaker, started a furniture business.

In 1850, the US Congress passed the Fugitive Slave Act which made it a crime for residents of free states to harbor or aid fugitive slaves like the Crafts. The act also rewarded anyone for assisting slave owners by apprehending their fugitive “property” and returning them to slavery.

Two slave catchers, Willis Hughes and John Knight, traveled north to capture the Crafts.  The town of Boston sheltered the couple and kept them away from the bounty hunters.

Hughes and Knight returned south, but still feeling unsafe anywhere, the Crafts moved to England in 1851.

The Crafts settled in West London where they eventually raised their  five children: Charles Estlin Phillips, William, Brougham, Alfred, and Ellen. They continued in the abolitionist movement by lecturing in England and Scotland.

In 1860 they published Running a Thousand Miles For Freedom.

During their nineteen years in England, the Crafts taught, ran a boarding house, and  William created commercial and mercantile agreements in West Africa.

Return to the US

They returned to the United States in 1870 and settled near Savannah, where they opened the Woodville Co-operative Farm School in 1873 to teach and employ newly freed slaves.  The school closed after a few years because of a lack of funding.

Here is a link to a PDF of their book: Running a Thousand Miles 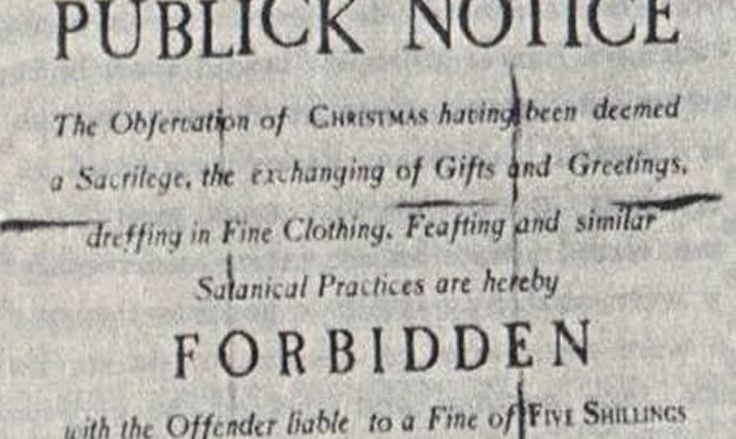 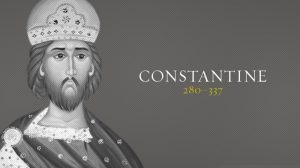 Christmas was not a holiday in early America. From 1659 to 1681, the celebration of Christmas was outlawed in Boston. Anyone exhibiting the Christmas spirit was fined five shillings. 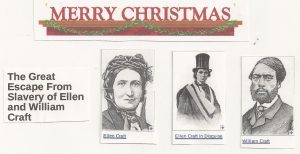 December 25, 1848: Ellen Craft and William were slaves from Macon, Georgia who escaped to the north in December 1848 by traveling openly by train and steamboat, arriving in Philadelphia on Christmas Day. She posed as a white male planter and he as her personal servant. Their daring escape was widely publicized, making them among the most famous of fugitive slaves. Abolitionists featured them in public lectures to gain support in the struggle to end the institution. As the light-skinned mixed-race daughter of a mulatto slave and her white master, Ellen Craft used her appearance to pass as a white man, dressed in appropriate clothing. (for complete story, see Christmas Slave Escape)

In 1849 Harriet Tubman escaped from slavery in Maryland. She became one of the best-known “conductors” on the Underground Railroad, returning to the South 19 times and helping more than 300 slaves escape to freedom. (SR, see Oct 1, 1851; BH, see Dec 4; Tubman, see April 14, 1853) 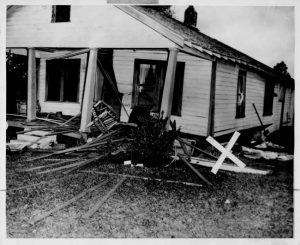 December 25, 1951: Ku Klux Klan blew up the house  of and killed Harry T. Moore and his wife, Harriette Vyda Simms Moore.  The Moores were the first NAACP members to be murdered for their civil rights activism; Moore has been called the first martyr of the 1950s-era civil rights movement.  The Nation later wrote in an editorial: “Harry T. Moore was a fine example of the Southern Negro leader—patient, courageous, determined to wipe out segregation and discrimination. The pictures of such leaders do not appear in the national magazines, and they seldom receive awards for ‘promoting interracial harmony’…For them ‘civil rights’ are not something to talk about at liberal luncheons in New York and Chicago but a milepost on the long, uphill road to freedom. Unfortunately, principles do not defend themselves; they must be defended by people. Southern Negroes of the type of Harry and Harriette Moore undertake the defense with little hope of reward or recognition and always at a price that too many Americans would regard as exorbitant. Their ultimate victory will be a day of triumph for all Americans.” (see August 1, 1952)

December 25, 1956: Ku Klux Klan members bombed the Birmingham, Alabama, home of civil rights activist Reverend Fred Shuttlesworth. Shuttlesworth was home at the time of the bombing with his family and two members of Bethel Baptist Church, where he served as pastor.

The 16-stick dynamite blast destroyed the home and caused damage to Shuttlesworth’s church next door but no one inside the home suffered serious injury. 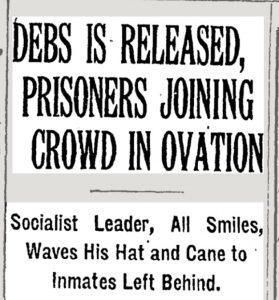 December 25, 1921: President Warren G. Harding pardoned Socialist Party leader Eugene V. Debs who had been sentenced to ten years in prison for his antiwar speech in Canton, Ohio, on June 16, 1918.

President Woodrow Wilson had rejected pleas to pardon Debs after the war ended. Debs was ill while in prison. President Harding pardoned him on the condition that he would get to meet Debs at the White House. Harding greeted him by saying “I have head so damned much about you.” Debs was greeted by many well-wishers at Union Station where he took the train home to Terre Haute, Indiana. (see July – December 1922) 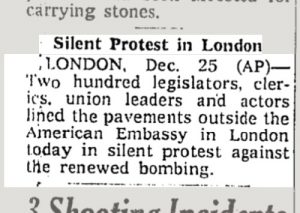 December 25, 1989: near Târgoviște, Romania the Ceaușescus were court-martialed on orders of the National Salvation Front, Romania’s provisional government. They faced charges including illegal gathering of wealth and genocide. Ceaușescu repeatedly denied the court’s authority to try him, and asserted he was still legally president of Romania.

The Ceaușescus were executed by three of soldiers though reportedly hundreds of others also volunteered. The firing squad began shooting as soon as the two were in position against a wall. Before his sentence was carried out, Nicolae Ceaușescu sang “The Internationale” while being led up against the wall. (see January 11, 1990)

December 25, 2009: passengers aboard a Northwest Airlines flight foiled an attempt to blow up the plane as it was landing in Detroit by seizing suspect Umar Farouk Abdulmutallab, a Nigerian accused of trying to set off explosives in his underwear. (NYT article) (Terrorism & Abdulmutallab: see Dec 26)

December 25, 2018: President Trump said, “”I can’t tell you when the government is going to reopen,” Trump told reporters in the Oval Office. “I can tell you it’s not going to be open until we have a wall, a fence, whatever they’d like to call it. I’ll call it whatever they want. But it’s all the same thing. It’s a barrier from people pouring into our country.” (IH see Dec 27; TW, see Dec 31)

Good will to all.