December 8, 1915: a white mob in New Hope near Columbus, Mississippi, raped and lynched a Black woman named Cordelia Stevenson and left her body hanging for days near a railroad track to terrorize Black residents.

Though the local police had concluded the her son had not been involved in a barn fire months earlier and released Mrs Stevenson and her husband, on December 8, a white mob gathered outside the Stevenson home, forced their way into the house while the couple slept, and kidnapped Mrs. Stevenson. The mob raped and lynched her, then left Mrs. Stevenson’s naked, brutalized body hanging by the railroad track for two days, where she was visible to thousands of people traveling by train.

On December 8, 1922 New York City officials yielded to protests and denied a permit to the film Birth of a Nation. D.W. Griffith’s film is one of the most important and controversial films in American movie history. It is important in the development of film as an art form because of its many innovations in cinematography and narrative storytelling techniques. The film was and still is controversial because it embraced the racist view of the Reconstruction Era following the Civil War, portraying African-Americans as savages and fools, while presenting the Ku Klux Klan as heroes. The film was protested by civil rights activists when it opened in New York City on March 3, 1915, but it was not banned at that time. (see Dec 12)

Gibbs v. Board of Education 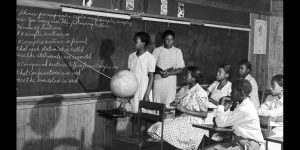 December 8, 1936: the NAACP won in its case, Gibbs v. Board of Education, against the state of Maryland, ensuring that white and black teachers were paid equally.

In 1937: originally a poem written by Abel Meeropol (1903 – 1986) under the pseudonym of Lewis Allan [the names of his two biological children, neither of whom survived infancy [(http://www.ladyday.net/stuf/vfsept98.html)]. Put to music, Billie  Billie Holiday’s recording made it to No. 16 on the charts in July 1939.  Time Magazine denounced the song as “a prime piece of musical propaganda” for the National Association for the Advancement of Coloured People (NAACP).” [http://www.spartacus.schoolnet.co.uk/USACstrangefruit.htm] (BH &  NM, see In 1938)

Southern trees bear strange fruitBlood on the leaves and blood at the root
Black bodies swinging in the southern breeze
Strange fruit hanging from the popular trees
Pastoral scene of the gallant south
The bulging eyes and the twisted mouth
Scent of magnolias, sweet and fresh
Then the sudden smell of burning flesh
Here is fruit for the crows to pluck
For the rain to gather, for the wind to suck
For the sun to rot, for the trees to dropHere is a strange and bitter cry

December 8, 1955: Black taxi drivers charged ten cents per ride, a fare equal to the cost to ride the bus, in support of the boycott. When word of this reached city officials on December 8, the order went out to fine any cab driver who charged a rider less than 45 cents. (BH, see January 3, 1956;see Boycott for much more)

December 8, 1969: four days after the assassination of Fred Hampton and Mark Clark in Chicago, Illinois, the Los Angeles Police Department (LAPD) set out to serve a warrant to search Party headquarters at 41st Street and Central Avenue for stolen weapons. Though the warrant was obtained on the basis of false information provided by the FBI, police used it as the basis to ambush about twelve Party members inside the building.

More than 200 police officers, including the newly militarized Special Weapons and Tactics (SWAT) team descended on the headquarters, armed with 5000 rounds of ammunition, gas masks, a helicopter, a tank, and a military-grade grenade.

The Party members inside resisted the raid and surrendered only after holding off police forces for approximately five hours. In the end, three officers and six members of the Black Panther Party were wounded during this attack. [EJI article] (next BH & BP, see January 13, 1970)

December 8, 2012: Mandela was hospitalized for nearly 19 days, being treated for pneumonia and having an operation for gallstones. (see December 5, 2013)

December 8, 2015: U.S. District Judge James Gwin rejected a reverse-discrimination lawsuit in which eight white Cleveland police officers and one Hispanic officer claimed the city placed them on longer stints of restricted duty than their black counterparts.

Gwin concluded that the officers produced “no evidence” to support their claims. He wrote that what the group described as evidence were just “short excerpts from dated testimony in unrelated cases that consist of individuals giving general discussion about race” and the city. Records show that the length of restricted duty more depends on the facts of a case than the color of an officer’s skin. (see 137 shots for much more) 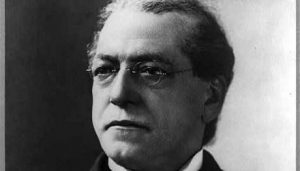 December 8, 1886: in the wake of the Haymarket incident (May 4, 1886), labor organizer Samuel Gompers set up the American Federation of Labor (AFL), a collection of trade unions that will play a major role in the labor movement throughout the century to come. (see Dec 11)

December 8, 1893: at a meeting of the Woman’s Suffrage League, Gage reacted to a statement made by the Rev Dr Parkhurst about women turned out to get a night’s lodging—that they might “starve or freeze on the streets,” with his consent, if it only brought them to a proper state of repentance. Gage stated, “For every 2,000 women who are turned homeless and friendless into the cold wintry streets, with every man’s hand against them , there are 20,000 men as guilty who are stting in comfortable homes, surrounded with luxury, who pose as honored and respected members of society.”

In 1895 Gage contributed to Elizabeth Cady Stanton’s The Woman’s Bible, writing interpretations of three Biblical passages pertinent to women. TWB is a major criticism of standard biblical interpretation from a radical feminist point of view. (see Gage for expanded chronology)

In 1897 Josephine Dodge founded the New York State Association Opposed to Woman Suffrage. Dodge was the first president, the NAOWS believed that woman suffrage would decrease women’s work in communities and their ability to effect societal reforms. Active on a state and federal level, the group also established a newsletter, Woman’s Protest( reorganized as Woman Patriot in 1918), that was a bellwether of antisuffrage opinion. In 1918 the NAOWS moved its headquarters to Washington, D.C., where it operated until its disbandment following the passage of the Nineteenth Amendment in 1920. Woman Patriot continued to be published through the 1920s, generally opposing the work of feminists and liberal women’s groups.founded. (NY State Library link) (next Feminism, see  March 18, 1898; VR, see April 25, 1898) 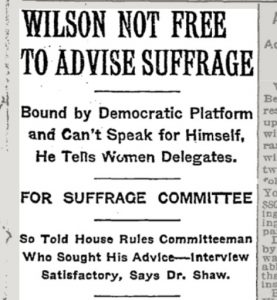 December 8, 1913: a delegation of 94 suffragists, led by Anna Howard Shaw of the National American Women’s Suffrage Association (NAWSA), met with President Woodrow Wilson in the White House on this day to discuss women’s suffrage. Wilson told them that he would not support women’s suffrage because it had not been  mentioned in the 1912 Democratic Party Platform. At the meeting, he refused to give his personal view on the topic. Even while governor of New Jersey (1910–1912), Wilson had avoided taking a public position on the issue. (see March 3, 1914)

December 8, 1941:  the United States declared war on Japan which already had 50,000 troops in Vietnam with the consent of the Vichy French government. (see April 1943) 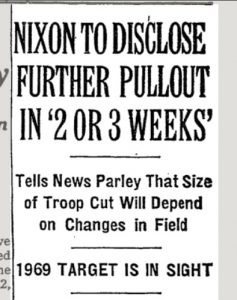 December 8, 1969: President Richard Nixon said that the Vietnam War was coming to a “conclusion as a result of the plan that we have instituted.” [Nixon had announced at a conference in June that the US would be following a new program he termed “Vietnamization.“] (see Dec 15)

December 8, 1941: Attorney-General Biddle called for tolerance in dealings with the many Japanese here “of unquestioned loyalty.” (see Internment for expanded chronology)

December 8, 1982: Norman D. Mayer, demanding a nationwide debate on nuclear weapons, threatened to blow up the Washington Monument with explosives he claimed were inside a van. 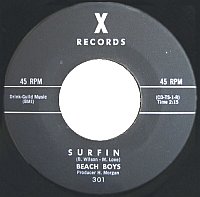 December 8, 1961: Candix Records( X records) a small label based in Los Angeles, released The Beach Boys first single ‘Surfin‘ . It peaked at number 75 in the US; it was never released in the UK.

On the strength of the song’s performance in the Southern California market, Capitol Records signed the group. Other surfing songs would follow: ‘Surfin’ Safari,’ ‘Surfin’ U.S.A.,’and ‘Surfer Girl.’ (see June 4, 1962) 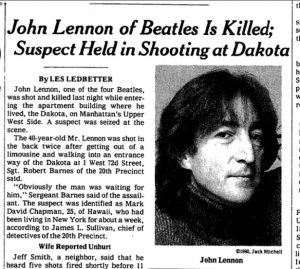 December 8, 1998: in a daylong session, President Clinton’s lawyers and three panels of witnesses testified on the president’s behalf, saying Clinton’s behavior does not warrant impeachment.  (see Clinton for expanded chronology)

December 8, 2009:Ohio prison officials executed a death row inmate, Kenneth Biros, with a one-drug intravenous lethal injection, a method never before used on a human. The new method, which involved a large dose of anesthetic, akin to how animals are euthanized, had been hailed by most experts as painless and an improvement over the three-drug cocktail used in most states, but it is unlikely to settle the debate over the death penalty.

While praising the shift to a single drug, death penalty opponents argued that Ohio’s new method, and specifically its backup plan of using intra-muscular injection, has not been properly vetted by legal and medical experts and that since it has never been tried out on humans before, it is the equivalent of human experimentation. But the United States Supreme Court refused to intervene and the procedure went largely as planned. [NYT article] (see Dec 18)

December 8, 2020: scientists at a conference of the American Geophysical Union said that during 2020 the Arctic had continued its unwavering shift toward a new climate as the effects of near-record warming surged across the region, shrinking ice and snow cover and fueling extreme wildfires.

“The story is unambiguous: the transformation of the Arctic to a warmer, less frozen and biologically changed region is well underway,” the scientists said in an annual assessment of the region. [NYT article] (next EI, see January 11, 2021)

December 8, 2021:  President Biden on set in motion a plan to make the federal government carbon neutral, ordering federal agencies to buy electric vehicles, to power facilities with wind, solar and nuclear energy, and to use sustainable building materials.

In a series of executive orders, Mr. Biden directed the government to transform its 300,000 buildings, 600,000 cars and trucks, and use its annual purchases of $650 billion in goods and services to meet his goal of a federal government that stops adding carbon dioxide into the atmosphere by 2050. [NYT article] (next EI, see Dec 14)