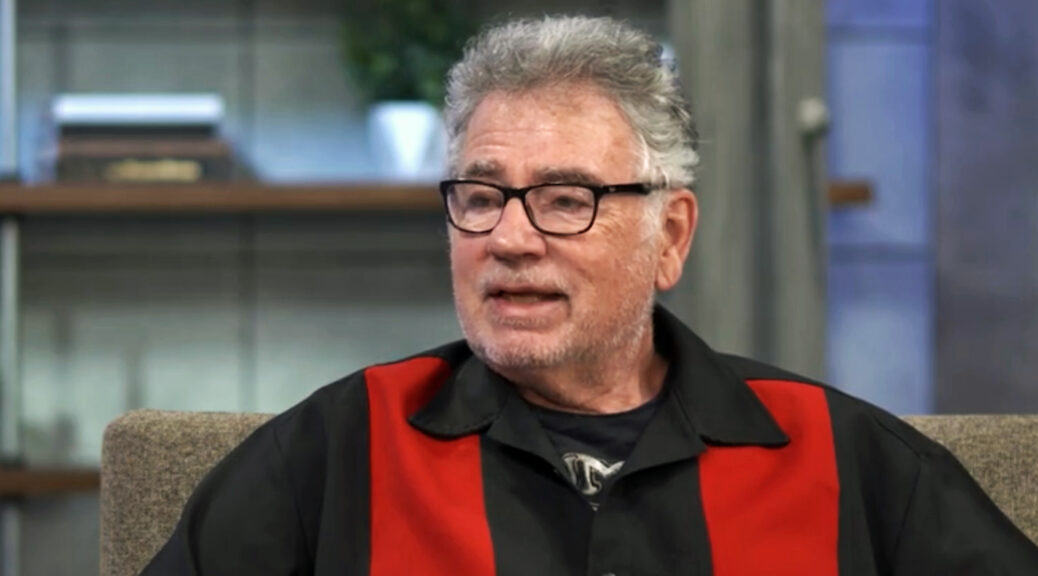 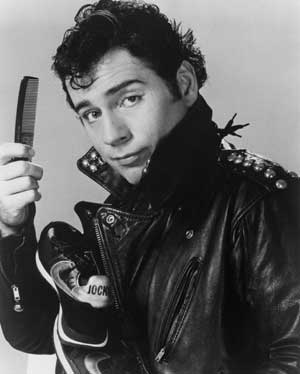 You can win some bar bets by asking who the youngest person to play at Woodstock was? Those who have an answer will often reply, “Santana’s drummer, Michael Shrieve.”

Country Joe McDonald boosts that belief dozens of times each day during the repeating movie in the entrance to the Main Gallery at Bethel Wood’s Museum. 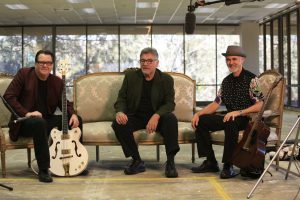 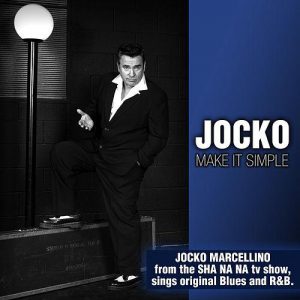 Jocko continues to be in music and perform with his own band that departs from doo wop and believes in the blues. He released an album called Make It Simple. 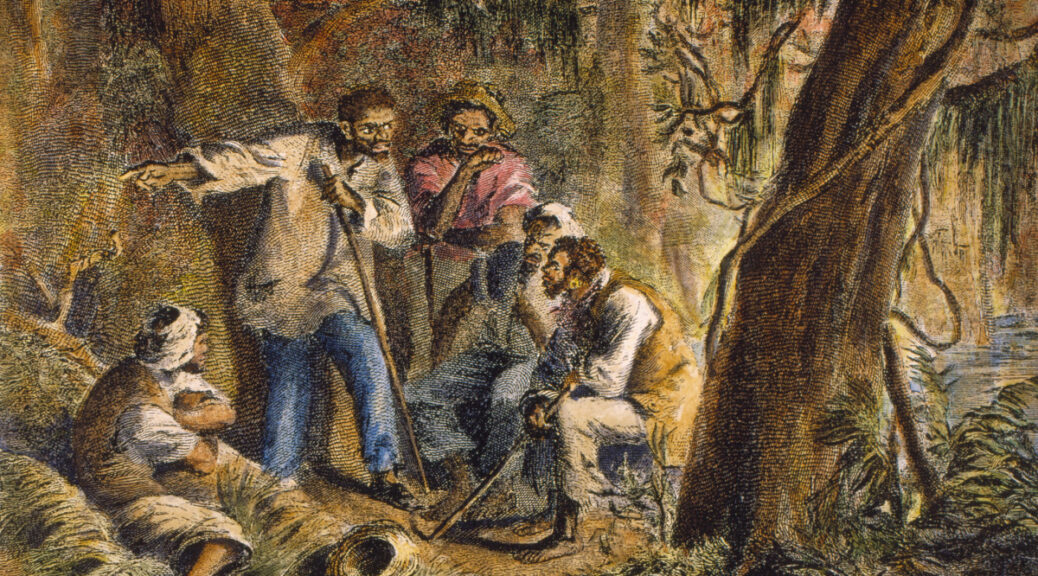 May 12, 1828: Turner had his third vision: “I heard a loud noise in the heavens, and the Spirit instantly appeared to me and said the Serpent was loosened, and Christ had laid down the yoke he had borne for the sins of men, and that I should take it on and fight against the Serpent, for the time was fast approaching when the first should be last and the last should be first… And by signs in the heavens that it would make known to me when I should commence the great work, and until the first sign appeared I should conceal it from the knowledge of men; and on the appearance of the sign… I should arise and prepare myself and slay my enemies with their own weapons.”

In 1830, Turner was moved to the home of Joseph Travis, the new husband of Thomas Moore’s widow. His official owner was Putnum Moore, still a young child. Turner described Travis as a kind master, against whom he had no complaints. (next BH, see June 30, 1829; see NT for his expanded chronology)

In 1830: after Peter Blow’s failure to farm in Alabama, he moved to Missouri with his slaves (including Dred Scott).

In 1833: US Army Surgeon Dr John Emerson purchased Scott and went with him to Fort Armstrong in Illinois, a free state (admitted as a state on December 3, 1818). (next BH, see October 21, 1835;  see Dred Scott, for expanded chronology) 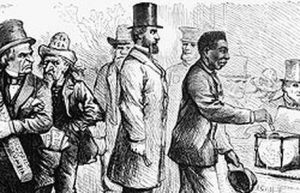 May 12, 1898: Louisiana adopted a new constitution, which incorporated a “grandfather clause” into voting requirements. It stated that a person may only vote if their father or grandfather was eligible to vote on or before January 1, 1867, thereby disqualifying most African Americans. By 1910, Georgia, North Carolina, Virginia, Alabama and Oklahoma had adopted similar “grandfather clauses.” (BH, see “In September”; VR, see February 14, 1899) 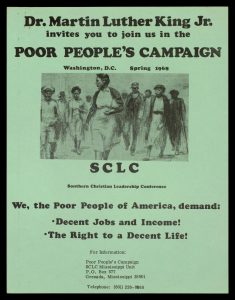 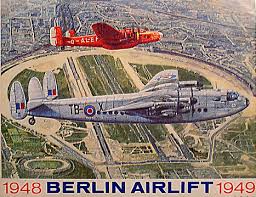 May 12, 1949: Berlin Airlift lifted. It was a clear success delivering more cargo than had previously been transported into the city by rail. An embarrassment to the Soviets who had refused to believe it could make a difference.  The airlift’s success resulted in the split up of Berlin: (DoS article) (see June 8) 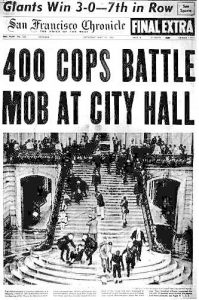 May 12, 1960: San Francisco City Hall was the scene of major protests against the House Un-American Activities Committee (HUAC), with fire hoses used against protesters on the steps of city hall. Because of the number of protesters (3,500 at one point), the committee’s unreasonable actions (such as excluding anti-HUAC people from the hearing room), and police brutality against demonstrators, the event is probably the most famous anti-HUAC protest in the entire history of the committee. Uncooperative witnesses were removed from the hearing room, while people with special passes from the committee were allowed in. When a larger crowd of protesters assembled the following day, singing and chanting, a judge ordered the crowd dispersed. On the 14th of May, fire hoses were used against the protesters outside the courthouse, forcing some people to slide down the steps of the building.

In response to the events that reflected badly on the committee, HUAC used newsreel footage of the demonstrations to produce a highly slanted film, Operation Abolition.

The ACLU of Northern California replied with its own film, Operation Correction, pointing out the distortions in the HUAC film.  (Free Speech Movement site article) (see May 16)

May 12, 2002: former U.S. President Jimmy Carter arrived in Cuba for a 5-day visit with Fidel Castro, becoming the first U.S. President, in or out of office, to visit the island since Castro’s 1959 revolution.  (Carter Center article) (see Nov 21)

May 12, 1961: NYC Mayor Wagner announced that the city would permit  folk singing, with instrumental accompaniment in Washington Square “on a controlled basis.” (see Ban for expanded story)

May 12, 1963: the still unknown Dylan walked off the set of the “Ed Sullivan Show” (the country’s highest-rated variety show) after network censors rejected  “Talkin’ John Birch Paranoid Blues,” the song he planned on performing. The song was satirical talking-blues number skewering the ultra-conservative John Birch Society and its tendency to see covert members of an international Communist conspiracy behind every tree. Dylan had auditioned “John Birch” days earlier and had run through it for Ed Sullivan himself without any concern being raised. But during dress rehearsal on the day of the show, an executive from the CBS Standards and Practices department informed the show’s producers that they could not allow Dylan to go forward singing “John Birch.” (see May 17) 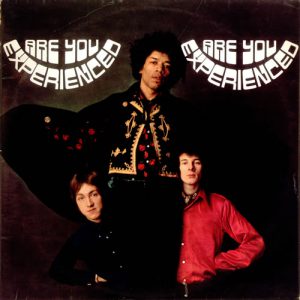 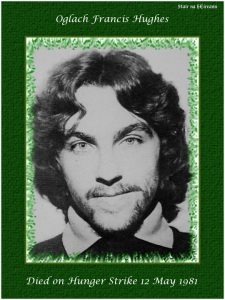 May 12, 1981:  after 59 days on hunger strike Francis Hughes (25), an Irish Republican Army  prisoner in the Maze Prison, died. [Hughes’ death led to a further surge in rioting in Nationalist areas of Northern Ireland, particularly in Belfast and Derry. In Dublin a group of 2,000 people tried to break into the British Embassy. (2017 Irish News article) (see Troubles for expanded story)

May 12, 2012: Police officers stopped people on New York City’s streets more than 200,000 times during the first three months of 2012, putting the Bloomberg administration on course to shatter a record set in 2011 for the highest annual tally of street stops. (see May 16) 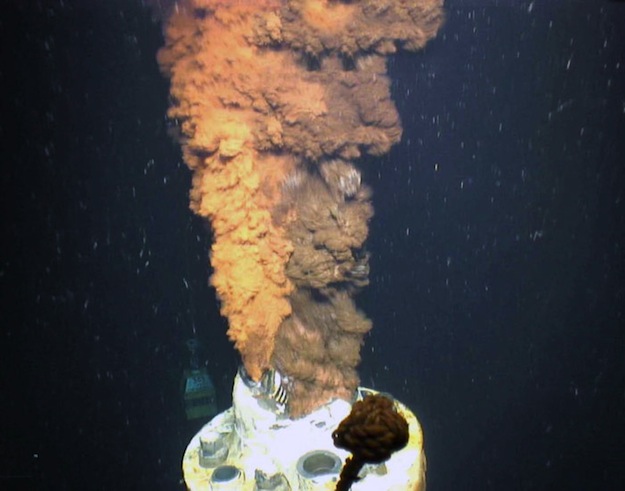 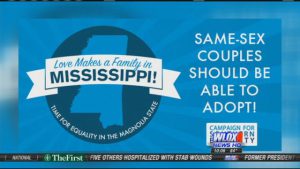 The Supreme Court ruling “foreclosed litigation over laws interfering with the right to marry and rights and responsibilities intertwined with marriage,” Jordan wrote. “It also seems highly unlikely that the same court that held a state cannot ban gay marriage because it would deny benefits — expressly including the right to adopt — would then conclude that married gay couples can be denied that very same benefit.” (see May 13)

May 12, 2017: in response to a recent joint lawsuit filed by the Arab American Civil Rights League, the ACLU of Michigan and others, Judge Victoria Roberts of the Eastern District in Michigan ordered President Donald Trump to turn over key documents related to his Executive Order banning travel from six Muslim majority countries and freezing the refugee resettlement program. (Independent article) (See May 25)