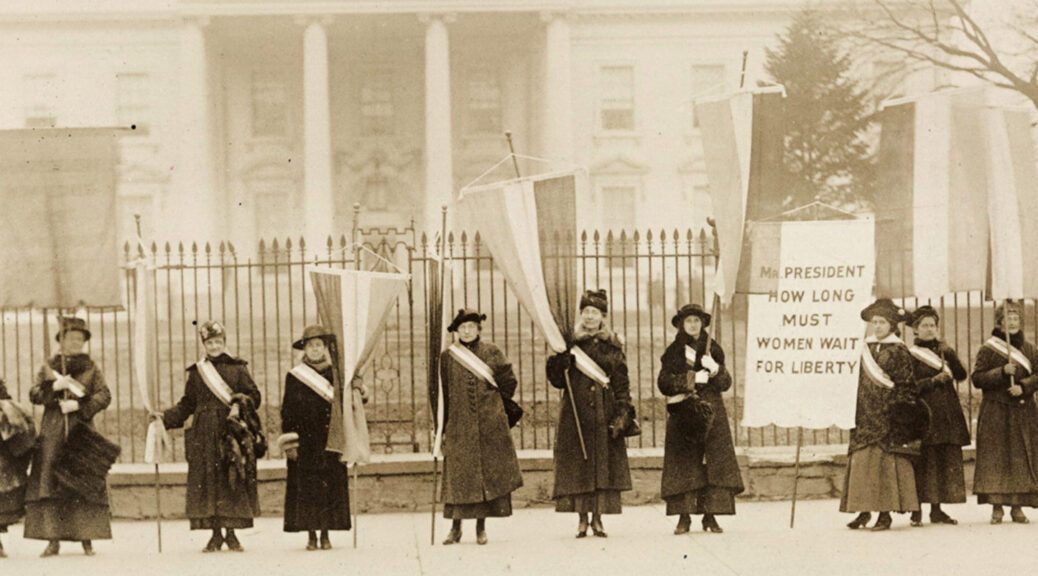 February 24, 1803: Chief Justice John Marshall of the US Supreme Court ruled in Marbury v. Madison that any act of Congress that conflicts with the Constitution is null and void, thereby establishing the doctrine of judicial review. (Oyez article) (see February 20, 1809) 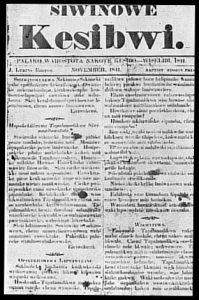 February 24, 1865: Kentucky, a border state, remained in the Union but the state’s legislature did not fully support President Abraham Lincoln or his Republican administration because lawmakers worried that Lincoln would abolish slavery. Throughout 1861, Lincoln assured Kentuckians he had no intention of interfering with the state’s “domestic institutions.” In March 1862, Lincoln proposed a plan of gradual emancipation for the border states, offering to compensate slaveholders who released their slaves. When the congressional delegations for the border states turned down that offer, Lincoln issued a draft Emancipation Proclamation in September 1862 and signed the final version on January 1, 1863.

Kentucky legislators opposed all efforts to abolish slavery, and on February 24, 1865, the Kentucky General Assembly rejected the Thirteenth Amendment. Prominent politicians and other public figures harshly criticized President Lincoln and members of Congress, and the Kentucky legislature expressed their disapproval of the amendment’s adoption by politically siding with the former Confederacy throughout the post-Civil War era. Kentucky did not officially adopt the Thirteenth Amendment until 1976. (see June 19)

February 24, 1956: U.S. Sen. Harry F. Byrd Sr. called for a policy of massive resistance to unite white leaders in Virginia in their campaign to preserve segregation. 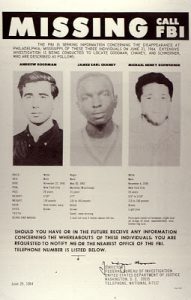 February 24, 1965: Federal Judge William Harold Cox, an ardent segregationist, threw out the indictments against all conspirators other than Lawrence Rainey and Cecil Price on the ground that the other seventeen were not acting “under color of state law.” (see KKK Kills for expanded story)

February 24, 2012: The Los Angeles Times published a study claiming that more than 90 percent of Oscar voters were white, and more than three-quarters were male. The statistics raised questions about whether minorities and women were getting fair chances of winning awards. [LA Times article] (see Mar 22)

February 24, 1908: in Muller v. Oregon, the US Supreme Court upheld a law limiting the workday to ten hours for women. Curt Muller, the owner of a laundry business, had been convicted of violating Oregon labor laws by making a female employee work more than ten hours in a single day. Muller was fined $10. Muller appealed to the Oregon Supreme Court and then to the U.S. Supreme Court, both of which upheld the constitutionality of the labor law and affirmed his conviction. (Oyez article)  (next Feminism, see July 21, 1908) 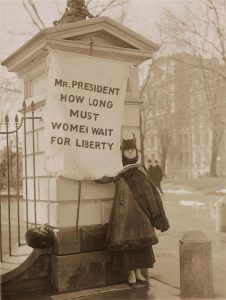 February 24, 1919: National Women’s Party members picketed President Wilson in Boston upon his return from Europe. They carried banners reminding him of his pledge to support suffrage amendment and lobby him to pressure Senate to pass amendment before the March 3 recess. Twenty-one demonstrators arrested and sentenced to eight days in Charles Street jail, last women imprisoned for suffrage. [NWP site] (see Mar 4)

February 24, 1914: Weeks v. United States, the United States Supreme Court unanimously held that the warrantless seizure of items from a private residence constituted a violation of the Fourth Amendment. It also prevented local officers from securing evidence by means prohibited under the federal exclusionary rule and giving it to their federal colleagues. [Oyez article] (see March 2, 1925) 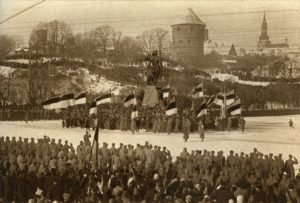 February 24, 1919: Congress passed the Child Labor Tax Law which imposed an excise tax of 10 percent on the net profits of a company that employed children. The law defined child labor as “under the age of sixteen in any mine or quarry, and under the age of fourteen in any mill, cannery, workshop, factory, or manufacturing establishment.”

The definition also included the use of children between the ages of fourteen and sixteen who worked more than eight hours a day or more than six days a week, or who worked between the hours of 7:00 p.m. and 6:00 a.m. (LH, see Aug 26; Child Labor, see September 21, 1921)

February 24, 2009: The US Senate confirmed Hilda Solis the Secretary of Labor by a vote of 80–17. Solis became the first Hispanic woman to serve as a regular U.S. cabinet secretary and the first cabinet secretary with Central American descent. [Latinaovations article] (see January 22, 2010)

February 24, 1956: the city of Cleveland invoked a 1931 law that barred people under the age of 18 from dancing in public without an adult guardian. (see Apr 3)

February 24, 1957: the Academy Awards committee, it was reported on this day, voted to deny eligibility for an Oscar to anyone who either admitted to being a member of the Communist Party or who refused to cooperate with an official legislative investigating committee. The new rule, passed at the last minute, was directed at Michael Wilson, screenwriter for the film, Friendly Persuasion, which was under consideration for several Oscars, including best screenplay. Wilson was named an “unfriendly witness” by HUAC in its investigation of alleged Communist influence in Hollywood.

Wilson had a distinguished career before being blacklisted. He contributed to the famous film, It’s A Wonderful Life, and shared an Oscar for the acclaimed film, A Place in the Sun. After being blacklisted, he anonymously contributed to the scripts for Bridge on the River Kwai and Lawrence of Arabia. He was eventually allowed to work under his own name and wrote the script for the original version of Planet of the Apes (which includes a wicked parody of the House Un-American Activities Committee; see February 8, 1968; next CW, see Mar 27)

February 24, 1969: Tinker v. Des Moines  Students do not leave their rights at the schoolhouse door. To protest the Vietnam War, Mary Beth Tinker and her brother wore black armbands to school. Fearing a disruption, the administration prohibited wearing such armbands. The Tinkers were removed from school when they failed to comply, but the Supreme Court ruled that their actions were protected by the First Amendment. (see Tinker for expanded story) 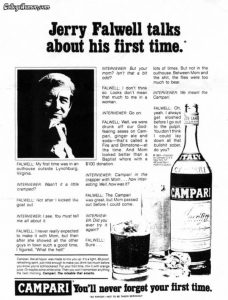 February 24, 1988: the U.S. Supreme Court voted 8-0 to overturn the $200,000 settlement awarded to the Reverend Jerry Falwell for his emotional distress at being parodied in Hustler, a pornographic magazine. (see June 21, 1989)

In 1983, Hustler had run a piece parodying Falwell’s first sexual experience as a drunken, incestuous, childhood encounter with his mother in an outhouse. Falwell, an important religious conservative and founder of the Moral Majority political advocacy group, sued Hustler and its publisher, Larry Flynt, for libel. Falwell won the case, but Flynt appealed, leading to the Supreme Court’s hearing the case because of its constitutional implications.The Supreme Court unanimously overturned the lower court’s decision, ruling that, although in poor taste, Hustler’s parody fell within the First Amendment’s protection of freedom of speech and the press.

The Court: “We conclude that public figures and public officials may not recover for the tort of intentional infliction of emotional distress by reason of publications such as the one here at issue without showing, in addition, that the publication contains a false statement of fact which was made with ‘actual malice,’ i.e., with knowledge that the statement was false or with reckless disregard as to whether or not it was true.” (see Dec 23)

February 24, 2004: President George W. Bush announced that he supported a constitutional amendment to ban same-sex marriage. He did not specifically endorse the wording proposed by Representative Marilyn Musgrave which had been questioned for the likelihood of also prohibiting states the ability to recognize same-sex civil unions and domestic partnerships. However, he did say that the wording to Musgrave’s amendment “meets his principles” in protecting the “sanctity of marriage” between men and women. (see Mar 7)

February 24, 2014:  Attorney General Eric H. Holder said that state attorneys general who believe that laws in their states banning same-sex marriage were discriminatory were not obligated to defend them. Mr. Holder was careful not to encourage his state counterparts to disavow their own laws, but his position, which he described in an interview with The New York Times, injected the Obama administration into the debate over gay marriage playing out in court cases in many states. [NYT article] (see Feb 26)

February 24, 2021: a Gallup survey found that more adult Americans were identifying as L.G.B.T., a shift that pollsters see as driven, at least in part, by people in younger generations who were more likely to consider themselves to be something other than heterosexual.

One in six adults in Generation Z, people born between 1997 and 2002, identified as L.G.B.T., the poll found. The growth in Americans who identified as L.G.B.T.Q. was likely to continue to increase, Gallup’s senior editor, Jeffrey Jones, wrote in announcing the results. That is because those in younger generations are more likely than those in older generations to to consider themselves L.G.B.T., he said. [NYT article] (next LGBTQ, see Mar 1)

February 24, 2010: Katina shootings: Officer Michael Lohman, who had encouraged the officers to provide false stories in the shooting incident entered a plea of guilty to obstruction of justice in federal court. [NOLA article] (see Mar 11) 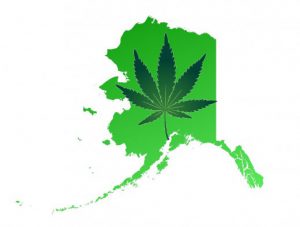 Alaskans age 21 and older could legally possess up to one ounce of marijuana, grow as many as six marijuana plants in their homes (with no more than three flowering), and possess any additional marijuana produced by those plants. [Vox dot com article] (next Cannabis, see Feb 26 or see CCC for expanded chronology)

February 24, 2015: US Justice Department officials met with Trayvon Martin’s family and told them that it will not be filing charges against George Zimmerman, who shot their son after a confrontation in 2012. Federal prosecutors concluded there was not sufficient evidence to prove Zimmerman, a neighborhood watchman in Sanford, Fla., intentionally violated Martin’s civil rights.  (see December 16, 2017)

February 24, 2015: President Obama rejected an attempt by lawmakers to force his hand on the Keystone XL oil pipeline, using his veto pen to sweep aside one of the first major challenges to his authority by the new Republican Congress.

With a 104-word letter to the Senate, Mr. Obama vetoed legislation to authorize construction of a 1,179-mile pipeline that would carry 800,000 barrels of heavy petroleum a day from the oil sands of Alberta to ports and refineries on the Gulf Coast.

In exercising the unique power of the Oval Office for only the third time since his election in 2008, Mr. Obama accused lawmakers of seeking to circumvent the administration’s approval process for the pipeline by cutting short “consideration of issues that could bear on our national interest.” [NYT article] (see Mar 4)

February 24, 2020: NBC News reported that an 11-judge panel of the 9th U.S. Circuit Court of Appeals in San Francisco had upheld a revised rule by the Trump administration that barred federally funded family planning clinics from providing abortion referrals.

The decision was made by a 7-4 vote. The panel overturned preliminary injunctions issued by federal judges in San Francisco, Oregon and Washington in lawsuits filed by a total of 22 states and several doctors and health organizations.

The revised rule allowed doctors in family planning clinics to mention abortion, but it prohibited them from encouraging abortion or providing an abortion referral. Instead, it required doctors to refer pregnant patients to prenatal services. (next WH, see May 22)

February 24, 2021: President Biden reopened the country to people seeking green cards, ending a ban on legal immigration that President Donald J. Trump had imposed last spring, citing what he said was the need to protect American jobs during the pandemic.

In a proclamation,  Biden said that the ban did “not advance the interests of the United States,” challenging Trump’s claims that the way to protect the American economy during the health crisis was to shut the country off from the rest of the world.

“To the contrary,” Mr. Biden said of his predecessor’s immigration ban, “it harms the United States, including by preventing certain family members of United States citizens and lawful permanent residents from joining their families here. It also harms industries in the United States that utilize talent from around the world.” [NYT article] (next IH, see Mar 4)