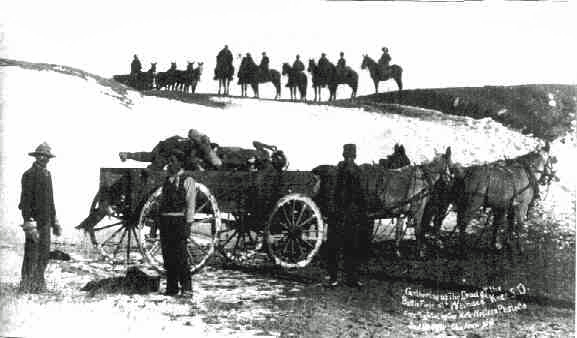 Treaty of New Echota/Trail of Tears

December 29, 1835:  U.S. government officials and about 500 Cherokee Indians claiming to represent their 16,000-member tribe, met at New Echota, Georgia, and signed a treaty. The agreement led to the forced removal of Cherokees from their southeastern homelands to Indian Territory west of the Mississippi River.

The Treaty of New Echota gave the Cherokees $5 million and land in present-day Oklahoma in exchange for their 7 million acres of ancestral land. Though the majority of Cherokees opposed the treaty, and Principal Chief John Ross wrote a letter to Congress protesting it, the U.S. Senate ratified the document in March 1836.

1850s – 1870s: systematic military campaigns to destroy subsistence base of Plains people. e.g. near extinction of American bison. [Once numbering in the hundreds of millions in North America and basis of life for the Plains Indians, the population of the American Bison decreased to less than 1000 by 1890.] (see July 23, 1851) 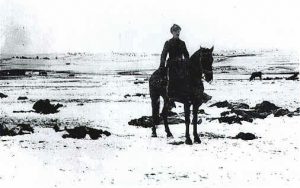 December 29, 1890: The Wounded Knee Massacre occurred on the Lakota Pine Ridge Indian Reservation in South Dakota It was the last battle of the American Indian war.

Troops went into the camp to disarm the Lakota. After an initial scuffle over a rifle, a shot was fired which resulted in the 7th Cavalry’s opening fire indiscriminately from all sides, killing men, women, and children, as well as some of their own fellow troopers. Those few Lakota warriors who still had weapons began shooting back at the attacking troopers, who quickly suppressed the Lakota fire. The surviving Lakota fled, but U.S. cavalrymen pursued and killed many who were unarmed.

By the time it was over, at least 150 men, women, and children of the Lakota Sioux had been killed and 51 wounded (4 men, 47 women and children, some of whom died later); some estimates placed the number of dead at 300. Twenty-five troopers also died, and 39 were wounded. At least twenty troopers were awarded the Medal of Honor.(see January 3, 1895) 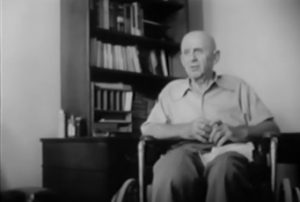 December 29, 1952: on July 5, 1952, as part of the Cold War anti-Communist mania, Congress passed the Gwinn amendment requiring that residents of federally supported public housing swear to a loyalty oath and not be a member of an organization on the Attorney General’s List of Subversive Organizations. James Kutcher, a World War II veteran who lost both legs in the 1943 Battle of San Pietro, Italy, was a member of the Socialist Workers Party, whose name was listed. Kutcher was living with his 73-year-old father, who was the official resident in a Newark Housing Authority apartment. It was reported on this day that the elder Kutcher faced the choice of evicting his son or moving out of public housing himself.

Kutcher turned to the American Civil Liberties Union, which successfully persuaded a court to issue a restraining order saving the Kutcher’s apartment and eleven other families who refused to swear that they were “loyal Americans.” (NYT article on the “legless veteran”)(see January 22, 1953)

December 29, 1974: John Lennon, son Julian, and May Pang were at Disney World. A lawyer bearing the revised contract (breaking up the Beatles) turned up, and Lennon asked Pang to take out her camera. As Pang describes the scene in “Instamatic Karma,” Lennon had a last-minute telephone conference with his own lawyer.

“When John hung up the phone,” she wrote, “he looked wistfully out the window. I could almost see him replaying the entire Beatles experience.” Pang then photographed him signing just beneath the clearly legible signatures of Paul McCartney, George Harrison and Richard Starkey ( Starr’s real name), the shutter clicking between the “h” and “n” of his first name.

Given that Lennon had been particularly militant about leaving the Beatles in 1969, it might seem odd to learn that he did so wistfully. Not to Pang.(next Beatles, see January 1975)

December 29, 1967: Federal Judge William Harold Cox, an ardent segregationist (Cox had criticized the Civil Rights Act of 1964, saying in court, ”I don’t know anybody down here who don’t oppose it.”) sentenced the men who had been involved in the murders of the three Freedom Summer volunteers: James E. Chaney, 21, Andrew Goodman, 21, and Michael Schwerner, 24.

He imposed sentences of ten years on two men, six years on two other men,  and the other three received four years.

Judge Cox said of his sentences, “They killed one nigger, one Jew, and a white man– I gave them all what I thought they deserved.”(next BH, see January 23, 1968; see next Murders for expanded chronology)

December 29, 2020: citing a lack of evidence, the US Justice Department announced that Timothy Loehmann and Frank Garmback would avoid federal criminal charges for their role in the killing of Tamir Rice, the 12-year-old Black boy who had been carrying a pellet gun when he was shot in 2014,

The announcement drew to a close a five-year federal investigation into the actions of then-Officer Loehmann and Garmbac, his partner.

Justice Department officials said that they could not establish that the officers involved in Tamir’s killing willfully violated his civil rights or that they knowingly made false statements with the intent of obstructing a federal investigation. [NYT article] (next B & S, see February 23, 2021) 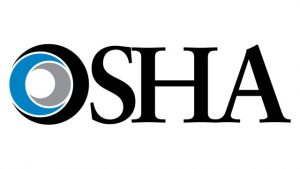 United Mine Workers of America 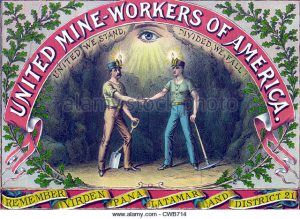 December 29, 2014: the last union coal mine in Kentucky, a state where workers fought and died for the right to organize, closed. Patriot Coal  announced the closing of its Highland Mine, which employed about 400 hourly workers. According to the Associated Press union leaders and retirees argued that increasing environmental regulations, a chaotic coal market, and anti-union political operatives have all contributed to the union’s undoing in Kentucky.

For the first time in about a century, in the state that was home to the gun battles of “Bloody Harlan,” not a single working miner belongs to a union. That has left a bad taste in the mouths of retirees: men like Charles Dixon, who heard the sputter of machine gun fire and bullets piercing his trailer in Pike County during a long strike with the A.T. Massey Coal Company in 1984 and 1985.

“I had my house shot up during that strike,” said Dixon, the United Mine Workers local president at the time. “I was just laying in bed and next thing you know you hear a big AR-15 unloading on it. Coal miners had it tough buddy, they sure have.” (next LH, see February 20, 2015)

December 29, 1971: Daniel Ellsberg and Anthony Russo were indicted on charges of theft of government documents and espionage for copying the Pentagon Papers and leaking them to the news media. The New York Times published the first story based on the Papers on June 13, 1971, creating a national sensation for its revelations about the history of American involvement in Vietnam. The Nixon administration obtained an injunction blocking further publication on June 15, 1971, but the Supreme Court declared the injunction unconstitutional in a historic freedom of the press case, United States v. New York Times, on June 30, 1971, which ruled the injunction an unconstitutional prior restraint of the press. Ellsberg and Russo were brought to trial; but in the middle of the trial, government misconduct against them was revealed and the charges were dismissed on May 11, 1973. The misconduct included the burglary of Ellsberg’s psychiatrist by the infamous “Plumbers” unit of President Nixon’s administration on September 9, 1971. (see Ellsberg for expanded chronology)

December 29, 2016: the Department of Justice announced that the U.S. prison population had fallen the most in almost four decades to 1.53 million inmates in 2015, resulting in the lowest rate of incarceration in a generation.

The department said in its year-end report on prison populations that changes in federal and state corrections policies that included drug treatment programs and the sentencing of fewer nonviolent drug offenders to federal prisons drove the drop. (see January 1, 2017)

December 29, 2016: Cherokee National Attorney General Tom Hembree declared unconstitutional the tribal ban on marriage between “parties of the same gender.” The decision carries the force of law and legalizes same-sex marriage in the Oklahoma-based Cherokee Nation, the second largest tribe in the United States, with about 300,000 members. (LGBTQ, see January 6, 2017; NA, see February 1, 2017)

December 29, 2017: the Trump administration decided not to appeal the December 22 rulings that blocked his ban of transgender persons in the military allowing the U.S. military to formally allow transgender citizens to sign up for service on January 1, 2018. (see January 8, 2018)

The notice “thanked me for my past service and said that my appointment was terminated, effective immediately,” said Patrick Sullivan, an epidemiologist at Emory University who worked on HIV testing programs. He was appointed to a four-year term in May 2016.

The council, known by the acronym PACHA, had advised the White House on HIV/AIDS policies since its founding in 1995. Members, who were not paid, offered recommendations on the National HIV/AIDS Strategy, a five-year plan responding to the epidemic. (see March 4, 2019)

December 29, 2017: Pennsylvania Judge P. Kevin Brobson of Commonwealth Court in Harrisburg said that the state’s Congressional districts were drawn to give Republicans an advantage, but they did not violate the state Constitution, ruling in a high-profile gerrymandering case with the potential to have major consequences on the 2018 midterm elections.

Brobson noted that Republicans hold 13 out of 18 Congressional seats in Pennsylvania, a perennial swing state that has one of the most extensively gerrymandered maps in the country. Nonetheless, the judge said that Democrats who brought suit had failed to articulate a legal “standard” for creating nonpartisan maps. [NYT report] (VR & PA, see January 22, 2018)

December 29, 2021:  the NY Times reported that Ghislaine Maxwell, the former companion to the disgraced financier Jeffrey Epstein, was convicted of conspiring with him for at least a decade to recruit, groom and sexually abuse underage girls.

A federal jury in Manhattan found Ms. Maxwell, 60, the daughter of a British media mogul, guilty of sex trafficking and four of the five other charges against her. She was acquitted of one count of enticing a minor to travel across state lines to engage in an illegal sexual act.

Maxwell’s trial was widely seen as the courtroom reckoning that Mr. Epstein never had. Mr. Epstein, who was arrested in July 2019 at the age of 66, killed himself in a Manhattan jail cell the following month, the medical examiner ruled, while awaiting his own trial on sex trafficking charges. Ms. Maxwell was arrested a year later. (next SaoC, see January 20, 2022)