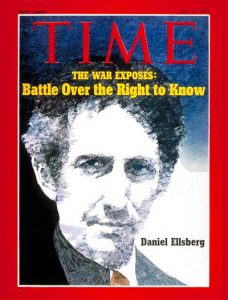 The story of Daniel Ellsberg and his release of the so-called Pentagon Papers is one of the biggest stories of the tumultuous 1960s. Ellsberg was not an underground Wikileak hacker who surreptitiously acquired secret information and arranged for its release. He was a part of the process to begin with.

Here are highlights of his and those famous papers’ stories. 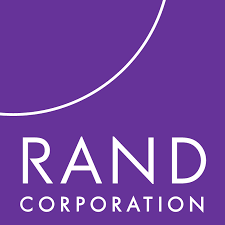 RAND Corporation [begun in 1948 and adapting its name  from a contraction of the term research and development], a California think-tank, hired him in 1959. He specialized in crisis decision-making and the command and control of nuclear weapons.

While at RAND, Ellsberg consulted with the Pentagon Under Secretary of Defense Robert McNamara during the Kennedy administration. Ellsberg visited South Vietnam with a research team to examine problems with non-nuclear, limited warfare. 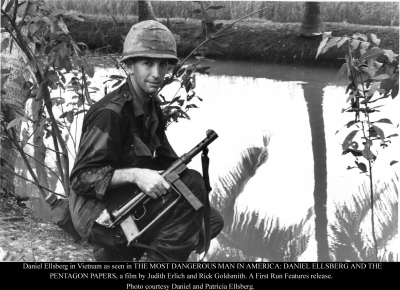 Ellsberg was working for the Defense Department as assistant to John McNaughton (assistant secretary of defense and a close adviser to McNamara) when on August 4, 1964 the  “second” Gulf of Tonkin incident occurred. It turned out that North Vietnamese “boats” were radar ghosts.” The validity of Johnson’s Gulf of Tonkin claim is later questioned. The claim will become one of presidential lies that led to U.S. escalation in Vietnam. 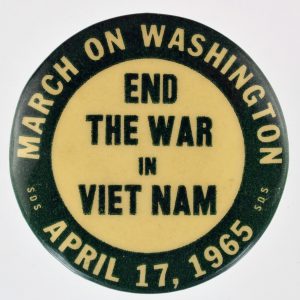 On April 17, 1965 the SDS led an anti-Vietnam war march in Washington. 15,000 attend including Phil Ochs, Joan Baez and Judy Collins. Daniel Ellsberg and Patricia Marx go on their first date…this rally. For the next two years Ellsberg served in Vietnam as a civilian on special assignment for the U.S. Department of State, studying counter-insurgency. [U Michigan article]

In June 1967  Secretary of Defense Robert McNamara assembled a team of analysts, many of whom had worked for RAND. Ellsberg was among them. Leslie Gelb and Morton Halperin headed the group.

In late 1968 they finish a report called the “History of U.S. Decision-making in Vietnam, 1945-68.”  By then, McNamara had resigned as secretary of defense. The study was never officially distributed or acted upon.

On March 1, 1968 Clark Clifford replaced McNamara as secretary of defense.

In December 1968 Ellsberg first met with Henry Kissinger, national security adviser to president-elect Richard Nixon. Ellsberg advised Kissinger on options in the U.S. military action in Vietnam. Kissinger and Ellsberg  continued to have a relationship during the first two years of Nixon’s presidency.

In September 1969 Ellsberg met draft resister and antiwar activist Randy Kehler, whose willingness to go to prison based on his opposition to the war had a great impact on Ellsberg. Shortly thereafter, Ellsberg finished reading a copy of the entire McNamara study, which revealed a pattern of war escalation even in the face of evidence that the war was unwinnable. The study also revealed lies told to the public about U.S. military actions. The report inspired Ellsberg to take action against what he now sees as “a wrongful war.” [NPR story]

In March 1971 Ellsberg met with reporter Neil Sheehan of The New York Times and showed him the top-secret McNamara study. Sheehan, reporter Hedrick Smith and a handful of other New York Times reporters and editors began working on a massive story based on the Pentagon Papers, while lawyers at The New York Times debated whether they could or should, publish top-secret government documents.  They decided yes on both.

June 13, 1971: the New York Times began to publish the Pentagon Papers. Later, in a 1996 article, the Times said that the Pentagon Papers “demonstrated, among other things, that the Johnson Administration had systematically lied, not only to the public but also to Congress, about a subject of transcendent national interest and significance“. Two days later, on June 15, the government, invoking “prior restraint,” obtained a temporary injunction to stop Times from publishing any more material from the Pentagon Papers.

On June 17, 1971 Daniel and Patricia Ellsberg went underground after reporter Sidney Ellsberg identified Daniel Ellsberg as the probable source for the Pentagon Papers.

June 18, 1971: The Washington Post published excerpts of the Pentagon Papers but was immediately enjoined from publishing additional excerpts. Eventually, 17 other papers will publish portions of the report.

June 29, 1971: Alaska Senator Mike Gravel convened a hearing of the Subcommittee on Public Buildings and Grounds in the middle of the night (and only he attended). He read the Pentagon Papers aloud for three hours, officially entering them into the Senate record.

On June 30, 1971: the U.S. Supreme Court ruled that the Pentagon Papers may be published, rejecting government injunctions as unconstitutional prior restraint. [NY Times article]

In July 1971 President Nixon appointed Egil “Bud” Krogh, Jr. and Kissinger aide David Young, Jr. to head a special investigations unit (nicknamed “the plumbers”) to obtain evidence to discredit Ellsberg, whom Henry Kissinger has deemed “the most dangerous man in America” who “has to be stopped.”

Krogh and Young hired G. Gordon Liddy and E. Howard Hunt, who hatched a plan to burglarize the offices of Ellsberg’s one-time psychiatrist in Los Angeles which they did on September 9.

On December 29, 1971: Daniel Ellsberg and Anthony Russo were indicted on charges of theft of government documents and espionage for copying the Pentagon Papers and leaking them to the news media.

Meanwhile, on October 10, 1972 the Washington Post reported that FBI agents had established that the Watergate break-in stemmed from a massive campaign of political spying and sabotage conducted on behalf of the Nixon reelection effort.

On November 7, 1972 Richard Nixon was reelected in one of the largest landslides in American political history, taking more than 60 percent of the vote.

On January 8, 1973 the trial opened of seven men accused of bugging Democratic Party headquarters in the Watergate apartment complex.

Between April 5 – 7, 1973 top Nixon aide John Ehrlichman secretly met twice with Judge Matthew Byrne, who was presiding over the Russo/Ellsberg trial, and offered him a job as the new director of the F.B.I.

On May 10, 1973 it was revealed in court that in 1969 the F.B.I. secretly wire-tapped and taped phone conversations between Ellsberg and then Kissinger aide Morton Halperin, who had earlier supervised the study that became the Pentagon Papers. The government claimed that all records of the wiretapping had been lost. 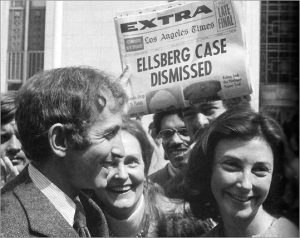 The next day, May 11, 1973, Judge Byrne granted a mistrial due to what he deemed to be serious government misconduct. All charges against Ellsberg and Russo dropped.  June 13, 1973:  the Washington Post reported that Watergate prosecutors had found a memo addressed to John Ehrlichman describing in detail the plans to burglarize the office of Pentagon Papers defendant Daniel Ellsberg’s psychiatrist. [NY Times article]

June 13, 2021: Was Ellsberg right?  50 years later, Gabriel Schoenfeld, author of “Necessary Secrets: National Security, the Media, and the Rule of Law” questioned Ellsberg’s patriotism and how there was and is a need for secrecy in a democracy: By leaking the secret study, Mr. Ellsberg was engaged in nothing less than an assault on democracy itself.