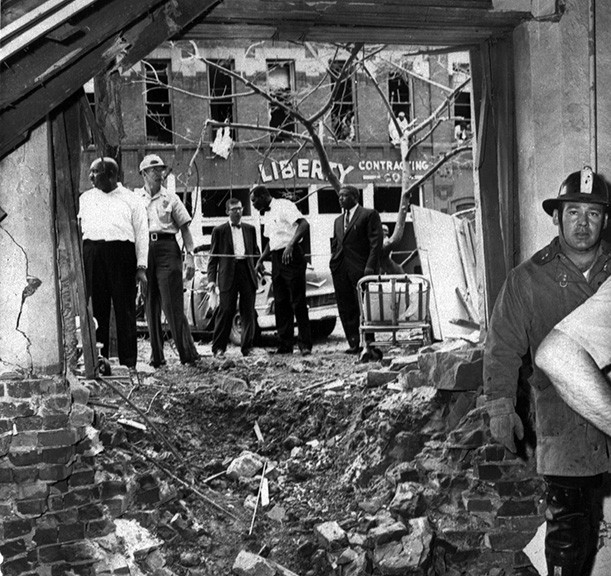 September 15, 2013: Japan started the process of switching off its last working nuclear reactor for a scheduled inspection with no restart date in sight due to public hostility towards atomic power.  [AlJazzera article] (see Oct 22)

September 15, 2015: Catholic peace activists Sister Megan Rice, Michael Walli and Greg Boertje-Obed were resentenced to time served for vandalizing a storage bunker that held much of the nation’s bomb-grade uranium. Rice, Walli, and Boertje-Obed were originally convicted of felony sabotage for their 2012 actions in Oak Ridge, Tennessee, where they cut through fences and sneaked into the most secure area of the Y-12 National Security Complex. Once there, they hung banners, prayed and hammered on the outside wall of the bunker to symbolize a Bible passage that refers to the end of all war: “They will beat their swords into ploughshares.” Rice was sentenced to nearly three years in prison while Walli, 66, and Boertje-Obed, 60, were each sentenced to just over five years. [CBS News article] (see January 6, 2016)

September 15, 1961, the Pendletons,  from Hawthorne, California, attend their first real recording session at Hite Morgan’s studio in Los Angeles. The band recorded ‘Surfin’. They changed their name to the Beach Boys. (see Dec 8) While riding on the handlebars of his 16-year-old brother’s bicycle, near his family‘s home, 13-year-old Virgil Ware was killed on Docena-Sandusky Road, outside Birmingham, Alabama.  16-year old Larry Joe Sims shot at the Ware brothers while he was riding by on a motorbike with Michael Lee Farley. Sims shot Virgil twice,. Sims and Farley had just attended a segregationist rally. Both  were charged with first-degree murder, but an all-white jury convicted them on the lesser charge of second-degree manslaughter. Judge Wallace Gibson suspended the boys’ sentences and gave them two years probation. (see Ware for expanded story)

Birmingham, AL. 18 days after King’s speech, Bobby Frank Cherry, Thomas Blanton, Herman Frank Cash, and Robert Chambliss, members of United Klans of America, a Ku Klux Klan group, planted a box of dynamite with a time delay under the steps of the Sixteenth Street Baptist Church, near the basement. At about 10:22 a.m., twenty-six children were walking into the basement assembly room to prepare for the sermon entitled “The Love That Forgives,” when the bomb exploded. Four girls, Addie Mae Collins (aged 14), Denise McNair (aged 11), Carole Robertson (aged 14), and Cynthia Wesley (aged 14), were killed in the attack, and 22 additional people were injured, one of whom was Addie Mae Collins’ younger sister, Sarah. The explosion blew a hole in the church’s rear wall, destroyed the back steps and all but one stained-glass window, which showed Christ leading a group of little children. September 15, 1978: exactly seven months after losing to Spinks was their rematch in the New Orleans Superdome. September 15, 2017: the University of Alabama unveiled an historic marker honoring Autherine Lucy Foster, the first black student to be admitted to an all-white public school or university in Alabama.

Foster attended the unveiling which was part of a larger campus ceremony at the College of Education.

Approximately 10% of the University of Alabama’s students are black. Approximately 25% of the State’s population is black. [UA article] (see Oct 13) September 15, 1977: “Tony” Boyle pleaded not guilty at the opening of his second trial on the charge of murder in the Joseph Yablonski case. (see February 18, 1978)

September 15, 2012: on the first of three days of events planned for the one-year anniversary of Occupy Wall Street, about 250 people marched down Broadway from Washington Square toward Zuccotti Park, accompanied by a large number of police officers on foot, in marked and unmarked cars, and riding scooters. [Vanity Fair article] (see Sept 17)

“Davis has not demonstrated a substantial likelihood of success on her federal constitutional claims,” the panel of judges said in their order denying the request. [New Yorker article] (Sept 21)

September 15, 2015: administrative Law Judge John S. Kennedy ruled that Lora Barbour, the mother of a Genny Barbour who had epilepsy, could not come to school to feed her daughter cannabis oil that had helped control her seizures. Kennedy said that state and federal drug possession laws trump their right to use medical marijuana on school grounds. It was the third legal defeat for the Barbour Family of Maple Shade, NJ. In addition to the conflicts in state and federal law, state Kennedy said the family failed to show their daughter Genny would suffer “irreparable harm” if denied medical marijuana in school, according to his 11-page decision. “There are no doctor’s reports from (Genny Barbour’s) treating physician that would establish that her lunchtime dose of marijuana is medically necessary,” Kennedy wrote. (NJ.com article) (M, see Oct 19; Barbours, see Nov 9)