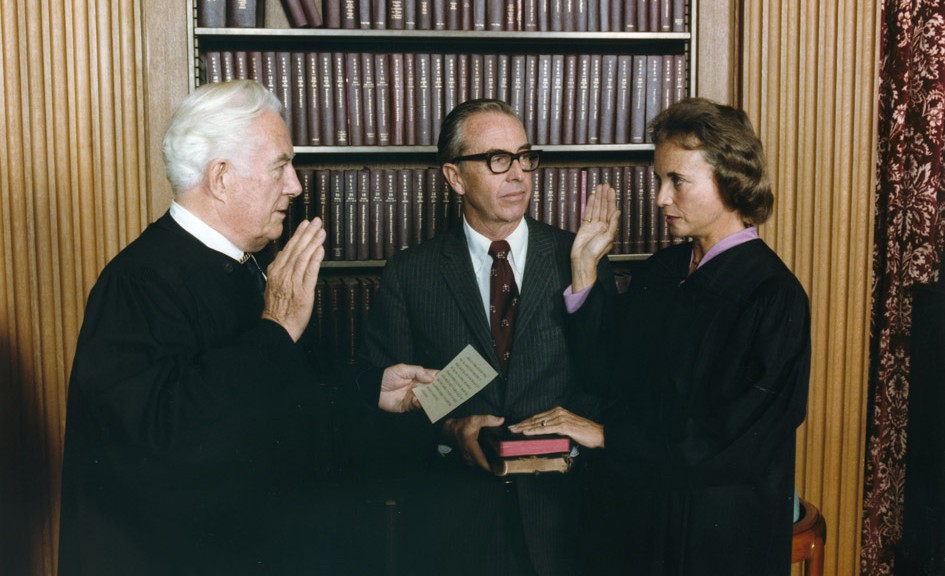 September 25, 1957: in a dramatic and unprecedented move, President Dwight Eisenhower sent federal troops to Little Rock, Arkansas, to ensure the racial integration of Central High School. The Little Rock crisis was one of the most dramatic events in the history of the civil rights movement.

Arkansas Governor Orval Faubus and local authorities had resisted integration in the face of a court order to implement the Supreme Court’s Brown v. Board of Education decision on May 17, 1954. Mobs had prevented the enrollment of nine African-American students (the “Little Rock Nine”) on September 23, as local authorities failed to maintain public order. Central High School was successfully integrated on this day because of the federal troops.

In 1958, however, local officials resisted another court order, and that issue resulted in a landmark Supreme Court decision asserting the authority of the federal courts to enforce lawful court orders, Cooper v. Aaron, on September 12, 1958. Nonetheless, the Little Rock school board (which was not directly affected by the court decision) voted to close the schools rather than integrate, and the 1958–1959 academic year is known as the “lost year.” The schools opened the following year. (BH & SD, see Oct 5; Central High School, see February 9, 1960) September 25, 1961: E.H. Hurst – a local white state legislator – shot and killed Herbert Lee in front of several eyewitnesses. Mr. Lee was a member of the Amite County, Mississippi, NAACP and worked with Bob Moses of the Student Nonviolent Coordinating Committee (SNCC) on a voter registration drive. Louis Allen, a black man who witnessed the murder, was initially coerced into saying that Hurst killed Herbert Lee in self defense; he later recanted and said Hurst had actually shot Lee for registering black voters.

Louis Allen spoke with the FBI about Lee’s murder, but told federal authorities that he would need protection if he were to agree to cooperate in their investigation. The FBI refused to provide protection, and Allen did not testify against Hurst. However, news spread in the local community that Allen had spoken with federal investigators.

Beginning in 1962, Mr. Allen was targeted for harassment and violence: local whites cut off business to his logging company; he was jailed on false charges; and on one occasion, Sheriff Daniel Jones broke Allen’s jaw with a flashlight. The son of a high ranking local Klansman, Sheriff Jones was suspected to also be a member of the Ku Klux Klan. Louis Allen filed complaints and testified before a federal grand jury regarding the abuse he suffered at the hands of Sheriff Jones, but his claims were dismissed. [Black Past article] (BH, see May 5, 1962; Lee, see January 31, 1964)

September 25, 1962: a pre-dawn fire at St. Matthew’s Baptist Church destroyed the building. It was the fifth black church to burn in the past month. (BH, see Sept 25;  see Albany for expanded story)

To sheriffs and law enforcement officers:  They were “authorized and directed to proceed to do all things necessary that the peace and security of the people of the State of Mississippi are fully protected.”

The second, directed at Meredith stated in part that “in order to prevent violence and a breach of the peace…do hereby and finally deny you admission to the University of Mississippi.” (see September 26, 1962)

September 25, 1964:  soon after obtaining the confessions (see Aug 11), detectives Cody and Coleman were ordered to stop their investigation. Afterwards, Cody was not sure anything else was done to develop the case, but on this date a grand jury indicted all four men on the evidence in the murder of Johnnie May Chappell.

J.W. Rich was the first to go on trial. He says now that the prosecution didn’t have anything on him. It’s true that the case may have looked slim to a jury. The .22-caliber gun that Cody and Coleman recovered was never introduced at trial (it later disappeared from the evidence room). Cody himself wasn’t called to testify. The other men’s statements weren’t submitted in court. The bullet taken from Chappell’s body was introduced in a plain white envelope, not an evidence bag showing the date it had been recovered and from where. Perhaps unwilling to press for a first-degree murder charge in the death of a black woman, the prosecutor told jurors they could find Rich guilty on a lesser count. The jury found him guilty of manslaughter and the judge gave Rich 10 years. He would serve 3. September 25, 1959: Soviet leader Nikita Khrushchev met with President Eisenhower. The two men came to general agreement on a number of issues, but a U-2 spy plane incident in May 1960 crushed any hopes for further improvement of U.S.-Soviet relations during the Eisenhower years. (NYT article) (see May 1)

September 25, 1965: a cartoon series featuring The Beatles began in the US. Simply titled The Beatles, it ran until 1969 on the ABC network with 39 episodes produced over three seasons. The series was shown on Saturday mornings at 10.30am until 1968, when it was moved to Sunday mornings. Each episode was named after a Beatles song, with stories based on the lyrics. The Beatles themselves were not directly involved in the production, which was created by Al Brodax and Sylban Buck, and produced by King Features Syndicate. American actor Paul Frees provided the voices for John Lennon and George Harrison, while British actor Lance Percival did the same for Paul McCartney and Ringo Starr. (see Oct 9)

September 25, 1976: the Irish rock band U2 formed after drummer Larry Mullen Jr. posted a note seeking members for a band on the notice board of his Dublin school.

September 25, 2020: Ruth Bader Ginsburg lain in state inside the US Capitol. The first person given that honor was Henry Clay in 1852, a Kentucky Senator who died during his term. Since then, the 33 men who have lain in state at the US Capitol had all been high-profile statesmen, like President Abraham Lincoln, or military members.

Ginsburg was the first woman and only the second justice from the top court to be given the honor. The first was William Howard Taft, who was also a US president. [BBC story] (next Feminism, see January 19, 2021)

September 25, 1983: 38 Irish republican prisoners, armed with six handguns, hijack a prison meals lorry and smash their way out of HMP Maze, in the largest prison escape since World War II and in British history. [BBC article]

September 25, 2005:  two months after announcing its intention to disarm, the Irish Republican Army (IRA) gave up its weapons in front of independent weapons inspectors. The decommissioning of the group s substantial arsenal took place in secret locations in the Republic of Ireland. One Protestant and one Catholic priest as well as officials from Finland and the United States served as witnesses to the historic event. Automatic weapons, ammunition, missiles and explosives were among the arms found in the cache, which the head weapons inspector described as “enormous.” (see Troubles for expanded story)

September 25, 2019: the White House released a reconstruction of the call that President Trump made to Urkraine  President  Volodymyr Zelensky in which Trump encouraged Zelensky to work with Attorney General William P. Barr and Rudolph W. Giuliani, the president’s personal lawyer, on corruption investigations connected to former Vice President Joseph R. Biden Jr. and other Democrats.

Although there was no explicit quid pro quo in the conversation, Trump raised the matter immediately after Zelensky spoke of his country’s need for more help from the United States. The call came only days after Mr. Trump had blocked $391 million in aid to Ukraine, a decision that perplexed national security officials at the time and for which he gave conflicting explanations. [NYT article] (see TII for expanded chronology)

September 25, 2019: according to the report by the Intergovernmental Panel on Climate Change, a group of scientists convened by the United Nations to guide world leaders in policymaking, climate change was heating the oceans and altering their chemistry so dramatically that it threatened seafood supplies, fueling cyclones and floods and posing profound risks to the hundreds of millions of people living along the coasts.

The report concluded that the world’s oceans and ice sheets were under such severe stress that the fallout could prove difficult for humans to contain without steep reductions in greenhouse gas emissions. Fish populations were already declining in many regions as warming waters threw marine ecosystems into disarray. [NYT article] (next EI, see Oct 29)

Septmber 25, 2020: U.S. District Judge Brian Morris ruled that President Trump’s leading steward of public lands had been serving unlawfully, blocking him from continuing in the position in the latest pushback against the administration’s practice of filling key positions without U.S. Senate approval.

U.S. Interior Department Bureau of Land Management acting director William Perry Pendley served unlawfully for 424 days without being confirmed to the post by the Senate as required under the Constitution, Morris determined.

The ruling came after Montana’s Democratic governor in July sued to remove Pendley, saying the former oil industry attorney was illegally overseeing an agency that manages almost a quarter-billion acres of land, primarily in the U.S. West.

“Today’s ruling is a win for the Constitution, the rule of law, and our public lands,” Gov. Steve Bullock said Friday. Environmental groups and Democratic lawmakers from Western states also cheered the judge’s move after urging for months that Pendley be removed. [NBC Montana story]

September 25, 2020: President Trump expanded a ban on exploratory drilling off the coasts of North Carolina and Virginia, his latest extension of an existing offshore drilling moratorium in the Gulf of Mexico.

The memorandum “prevents consideration of this area for any leasing for purposes of exploration, development, or production during the 10-year period beginning on July 1, 2022, and ending on June 30, 2032.”

The memo makes clear that the ban on leasing does not apply if it’s for “environmental conservation purposes, including the purposes of shore protection, beach nourishment and restoration, wetlands restoration, and habitat protection.”

It stands in contrast to the Trump administration’s record of supporting oil and gas production and rolling back rules on greenhouse gas emissions. [NPR story] (next EI, see Nov 4)

September 25, 2020: after a September 22 hearing, on this date in U.S. District Court for the Northern District of California, Judge Lucy H. Koh barred the Trump administration from ending the 2020 census a month early.

Koh  had issued a preliminary injunction on September 5 preventing the administration from winding down the count by September 30, a month before the scheduled completion date of October 31. She also barred officials from delivering completed population data to the White House on Dececember. 31 rather than the April 2021 delivery date that had previously been set out.