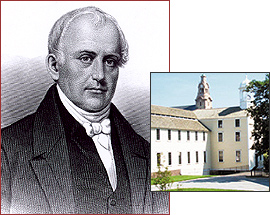 December 21, 1837: following an anti-slavery speech by Vermont representative William Slade, the U.S. House of Representatives overwhelmingly passed a rule that prohibited any future discussion about the abolition of slavery in the House. The rule remained in effect until 1844, preventing the topic of abolition from even being discussed for almost a decade.  [EJI article] (next BH, see February 6, 1838) 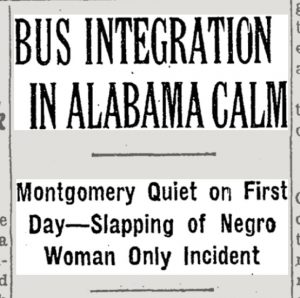 December 21, 1987:  Jon Lester, Scott Kern and Jason Ladone were convicted of the second-degree manslaughter of Michael Griffith (December 20, 1986). Ultimately nine people would be convicted on a variety of charges related to the death of Griffith.

In 1988: two professors invited Autherine Lucy Foster to speak at the University about the events that had occurred in 1956. After her speech, faculty members persuaded the Board of Trustees to overturn her expulsion. 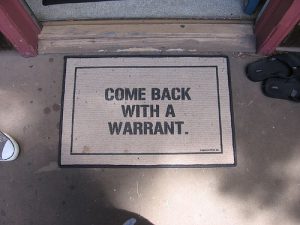 December 21, 1911: a police officer arrested Fremont Weeks at the Union Station in Kansas City, Missouri where he was employed by an express company. Other officers entered the Weeks’ house without a search warrant and took possession of papers and articles which were afterwards turned over to the US Marshal. The officers returned later in the same day with the marshal, still without a warrant, and seized letters and envelopes they found in the drawer of a chiffonier. These papers were used to convict Weeks of transporting lottery tickets through the mail. On February 24, 1914 in Weeks v. United States, the United States Supreme Court unanimously held that the warrantless seizure of items from a private residence constituted a violation of the Fourth Amendment. It also prevented local officers from securing evidence by means prohibited under the federal exclusionary rule and giving it to their federal colleagues. (see February 24, 1914)

December 21, 1919, : the ship USAT Buford, labeled the “Red Ark,” embarked from New York City on this day, carrying 249 aliens who were deported because of their alleged anarchist or Communist beliefs.

The most famous passenger was the anarchist, birth control advocate and anti-war activist Emma Goldman, who had been arrested June 15, 1917, for opposing the draft. Anarchist Alexander Berkman accompanied her. An estimated 184 of the 249 aliens on the Buford were members of the Union of Russian Workers, which had been one of the principal targets of the first Palmer Raids on November 7, 1919. All of the passengers were shipped to the Soviet Union. (see Emma Goldmanj for expanded chronology) 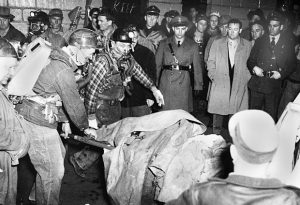 December 21, 1970:  in Oregon v Mitchell, the US Supreme Court held that the Congress could set voter age requirements for federal elections but not for state elections. The case also upheld Congress’s nationwide prohibition on literacy tests and similar “tests or devices” used as voting qualifications as defined in the Voting Rights Act of 1965. (see March 23, 1971)

December 21, 1971: Elvis Presley met President Nixon. According to notes take at the meeting by  Nixon aide Egil “Bud” Krogh “Presley indicated that he thought the Beatles had been a real force for anti-American spirit. The President then indicated that those who use drugs are also those in the vanguard of anti-American protest.”

“I’m on your side,” Elvis told Nixon, adding that he’d been studying the drug culture and Communist brainwashing. Then he asked the president for a badge from the Bureau of Narcotics and Dangerous Drugs. “Can we get him a badge?” Nixon asked Krogh.

In 1973: The Bureau of Narcotics and Dangerous Drugs (BNND) and the Office of Drug Abuse Law Enforcement (ODALE) are merged to form the US Drug Enforcement Agency (DEA). (see Cannabis for expanded chronology)

December 21, 1982: Congress, passed the first Boland Amendment, which prohibited the CIA or the Defense Department from spending any money to assist the anti-Communist Contras in Nicaragua. (Congress passed further Boland Amendments in 1983 and 1984.) The Boland Amendments set the stage for the Iran-Contra scandal that eventually engulfed the administration of President Ronald Reagan. Reagan and his CIA Director William Casey were deeply committed to fighting communism at every opportunity around the world, even if it involved breaking the law — as the Iran-Contra scandal revealed. (see December 7, 1985)

December 21, 1988: N.Y.-bound Pan-Am Boeing 747 exploded in flight from a terrorist bomb and crashed into Scottish village, killing all 259 aboard and 11 on the ground. Passengers included 35 Syracuse University students and many U.S. military personnel. Libya formally admitted responsibility in August 2003 and offered $2.7 billion compensation to victims’ families. (see December 16, 1989)

December 21, 2004: a suicide bomber attacked the forward operating base next to the US military airfield at Mosul, Iraq, killing 22 people; it was the deadliest suicide attack on US soldiers during the Iraq War. (photos from NYT)(IWII, see January 12, 2005; Terrorism, see June 14, 2005)

December 21, 1989: Romanian leader, Nicolae Ceaușescu, spoke to crowd of the Socialist revolution’s chievements and Romanian “multi-laterally developed Socialist society.” Roughly eight minutes into his speech, several people began jeering, booing and whistling at him and shouting “Timișoara,” a reaction that would have been unthinkable for most of the previous quarter-century of his rule. As the speech wore on, more and more people did the same. He tried to silence them by raising his right hand and calling for the crowd’s attention before order was temporarily restored, then proceeded to announce social benefit reforms.

The crowd continued to boo and heckle him. (see Dec 22) 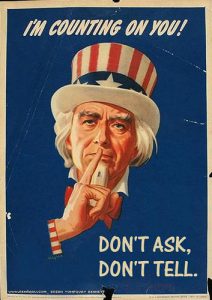 December 21, 1993: the Department of Defense issued a directive prohibiting the U.S. Military from barring applicants from service based on their sexual orientation. “Applicants… shall not be asked or required to reveal whether they are homosexual, ” states the new policy, which still forbids applicants from engaging in homosexual acts or making a statement that he or she is homosexual. This policy is known as “Don’t Ask, Don’t Tell.” (see Dec 31)

In the year 2000, Texas led the US in executions with 40 inmates being put to death. Oklahoma followed with 11, Virginia with 8, and Florida with 6 executions. Between 1976 and Mar. 30, 2010, Texas executed 452 inmates. Virginia came in second most with 106 executions and Oklahoma in third with 92 executions.

Between January 17, 1995 and December 21, 2000, Texas Governor George W. Bush presided over the execution of 150 men and two women, more than any other governor since the death penalty was reinstated in 1976. Governor Bush received a summary from his legal counsel before each execution to determine whether or not to allow the execution to proceed. The first fifty-seven summaries were prepared by Alberto R. Gonzales, who served as US Attorney General under President Bush between Feb. 3, 2005 and Sep. 17, 2007. Governor Bush granted one clemency during his term in office.(see June 11, 2001)

December 21, 2006: President George W. Bush signed into law a bill that authorized up to $38 million for the preservation and interpretation of conﬁnement sites where Japanese Americans were detained during World War II. The law directed the National Park Service to administer this grant program, once funds were available.(see JIC for expanded chronology)

December 21, 2012: Pope Benedict XVI named the Rev. Robert W. Oliver as the Vatican’s new sex crimes prosecutor. Oliver, a canon law specialist at the Archdiocese of Boston, would be the “promoter of justice” at the Congregation for the Doctrine of the Faith, the Vatican’s doctrinal office that reviews all abuse cases. (NYT article) (see Feb 11)

December 21, 2017: Pope Francis and others eulogized Cardinal Bernard Francis Law, the disgraced former archbishop of Boston who resigned after it was revealed he had protected pedophile priests, with a full cardinal’s funeral at St. Peter’s Basilica in Vatican City.

At the last minute, the Vatican cancelled plans to broadcast the funeral.

The Vatican website had posted a link to a live television feed that showed it would broadcast the “Funeral Mass for Cardinal Bernard Francis Law, of the Title of Santa Susanna Altar of the Chair of Saint Peter,” but shortly before the funeral started, the video link disappeared from the site, and the Vatican’s YouTube channel on showed just the exterior of the plaza surrounding the basilica.

The page posted no explanation for the change, although Survivors Network of Those Abused by Priests (SNAP) had criticized the Vatican’s plans for an elaborate celebration of Cardinal Law’s life. (see January 18, 2018)

December 21, 2017: the U.S. District Court for the Southern District of California ruled that an Imperial County, California high school football player must be allowed to kneel during the singing of the national anthem and can’t be ordered by his school to stand for the performances.

The decision temporarily struck down rules set by the San Pasqual Valley Unified School District that prohibited “kneeling, sitting or similar forms of political protest” at athletic events and required students and coaches to “stand and remove hats/helmets … during the playing or singing of the National Anthem,” according to the ruling by district court.

The school district set the rules after students from a rival high school in neighboring Arizona yelled racial slurs at San Pasqual Valley High School students and threatened to force the football player at the center of the controversy to stand, the ruling said. (FS, see May 23, 2018; SR, see July 19, 2018)

December 21, 2017: despite President Trump’s assertion that “Obamacare is imploding” the administration announced that 8.8 million people had signed up for health insurance through the Affordable Care Act’s federal marketplace. The number surprised many because it was only slightly lower than the total in the last open enrollment period, which was twice as long and heavily advertised suggesting that consumers want and need the coverage and subsidies available under the Affordable Care Act, despite political battles over the law. (next ACA, see (see December 14, 2018)

December 21, 2018: the Supreme Court refused to allow the Trump administration to immediately enforce its new policy of denying asylum to migrants who illegally cross the Mexican border.

The court’s ruling thwarted, at least for now, President Trump’s proclamation in November that only migrants who arrived in the United States legally or applied at a port of entry would be eligible for asylum. [NYT story] 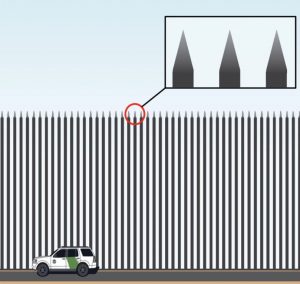 December 21, 2018: President Trump shared a design of a tall fence on Twitter, which he referred to as a “Steel Slat Barrier.”