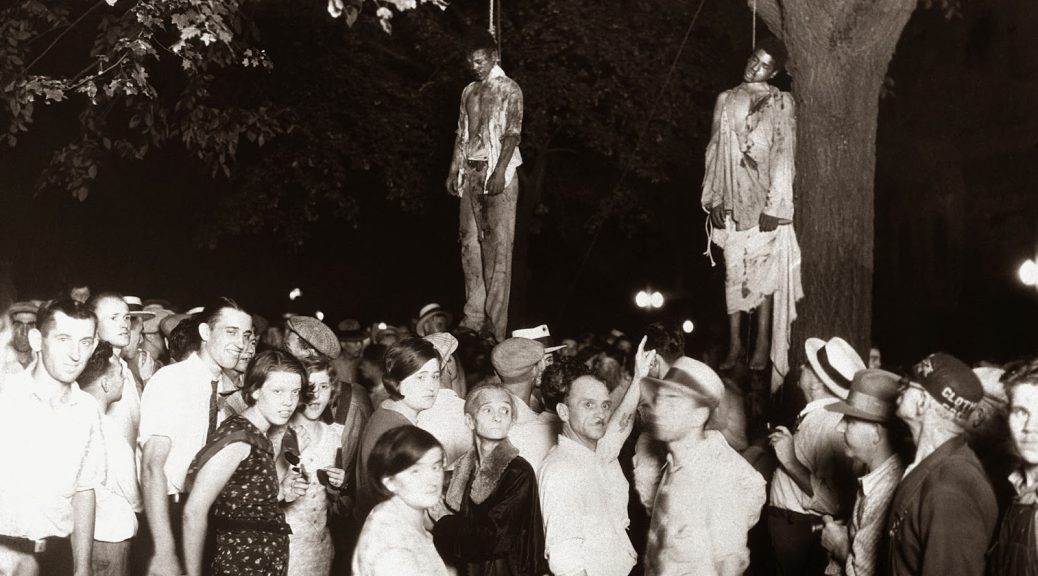 August 7, 1789: President George Washington signed the Northwest Ordinance The primary effect of the ordinance was the creation of the Northwest Territory [the region south of the Great Lakes, north and west of the Ohio River, and east of the Mississippi River] and  one of its provisions was the prohibition of slavery in the territory which had the practical effect of establishing the Ohio River as the boundary between free and slave territory in the region between the Appalachian Mountains and the Mississippi River. This division helped set the stage for national competition over admitting free and slave states, the basis of a critical question in American politics in the 19th century until the Civil War. (BH, see February 11, 1790)

In 1833 US Army Surgeon Dr John Emerson purchased Scott and went with him to Fort Armstrong in Illinois, a free state (admitted as a state on December 3, 1818). (next BH, see October 21, 1835; see Dred Scott for full story} August 7, 1930: a white mob lynched Thomas Shipp and Abram Smith in Marion, Indiana. The two young black men, 18 and 19 years old respectively, had been arrested that afternoon. They were accused of attacking a young white couple, beating and fatally shooting the man, and attempting to assault the woman. Once the men were detained, word of the charges spread and a growing mob of angry white residents gathered outside the county jail.

Around 9:30 p.m., the mob attempted to rush the jail, but was repelled by tear gas. An hour later, they successfully barreled past the sheriff and three deputies, grabbed Shipp and Smith from their cells as they prayed, and dragged them into the street. By then numbering between 5000 and 10,000 people (half the white population of Grant County) the mob beat, tortured, and hung both men from trees in the courthouse yard, brutally executing them without benefit of trial or legal proof of guilt. As the men’s bodies hung, members of the mob re-entered the jail and grabbed 16-year-old James Cameron, another youth being held for the crime. The mob beat Cameron severely and were preparing to hang him alongside the others when a member of the crowd intervened and insisted he was innocent. Cameron was released and the mob later dispersed.

Enraged by the lynching, the NAACP traveled to Marion to investigate, and later provided United States Attorney General James Ogden with the names of 27 people believed to have participated. Though the lynching and its spectators were photographed, local residents claimed not to recognize anyone pictured and no one was charged or tried in connection with the killings. A photograph of Shipp’s and Smith’s battered corpses hanging lifeless from a tree, with white spectators proudly standing below, remains one of the most iconic lynching photographs. After seeing the photo in 1937, New York schoolteacher Abe Meeropol was inspired to write “Strange Fruit,” a haunting poem about lynching that later became a famous song recorded by Billie Holiday.  [Black Past article] (next BH & Lynching, see Nov 20; see AL3 for expanded chronology of early 20th century lynching)

August 7, 1990: The African National Congress announced that it ordered the immediate suspension of its guerrilla campaign against apartheid, which started in the early 1960s. While the war between the A.N.C. and the government had operated on a low level for years, the announcement was significant because it gives Mr. de Klerk political ammunition to use against the right-wing opposition to negotiations. [AFC site] (SA/A, see Oct 15; Mandela, see December 20, 1991)

August 7, 2011: CNN broadcasts a security video showing the Anderson incident. The murder, whose race-based implications had been slow to surface, shot to national prominence with the video’s release. (see Aug 20)

August 7, 1915: Goldman and Ben Reitman were fined $100 for having distributed birth control information the day before. Goldman speaks that evening on “The Intermediate Sex (A Discussion of Homosexuality)” at Turn Hall. In the audience were policemen in plain clothes, a deputy district attorney, and a deputy city attorney. She was not arrested. (see February 8, 1916) August 7, 1960: Ivory Coast independent from France. [BBC article] (see ID for expanded list of the many Independence days during 1960)

August 7, 1967: in a NYT article, R W Apple, the chief of the paper’s Saigon office, called into question every optimistic assumption about the war the administration and the military had expressed. The article pointed out that 13,000 Americans had died, 75,000 had been wounded, that the war was costing $2 billion a month, that 1.2 million allied troops had been able to secure only a freaction of a country less than one and a half times the size of NY state, and that every time General Westmoreland optimistically states that the South Vietnamese military will soon be able to fight on their own, he asks for more American troops. (see Aug 8)

August 7, 1965: The Merry Pranksters invited the Hell’s Angels to party with them at the La Honda camp. The party went on for two days, but the police never had sufficient reason to move in. [blog article] (see Aug 24)

August 7, 1974: after months of preparation, shortly after 7:15 a.m., Philippe Petit stepped off the South Tower and onto his 3/4″ 6×19 IWRC (independent wire rope core) steel cable. He walked the wire for 45 minutes, making eight crossings between the towers, a quarter of a mile above the sidewalks of Manhattan. In addition to walking, he sat on the wire, gave knee salutes and, while lying on the wire, spoke with a gull circling above his head. (NYT article) (see May 26, 1977)

August 7, 2015: in a decision that surprised many, a jury sentenced James E. Holmes to life in prison with no chance of parole, rejecting the death penalty for the man who carried out a 2012 shooting rampage that killed 12 people in a Colorado movie theater. [NYT article] (see Sept 24)

August 7, 2017: the NY Times obtained a draft report by scientists from 13 federal agencies, which had not yet been made public. It concluded that Americans were feeling the effects of climate change right now. It directly contradicted claims by President Trump and members of his cabinet who said that the human contribution to climate change was uncertain, and that the ability to predict the effects is limited.The average temperature in the United States had risen rapidly and drastically since 1980, and recent decades had been the warmest of the past 1,500 years, according to the federal climate change report. It awaited approval by the Trump administration. [NYT article] (see Oct 9)

August 7, 2019: federal immigration officials raided several food-processing plants in Mississippi and arrested approximately 680 people believed to be working in the U.S. without authorization.

The U.S. Immigration and Customs Enforcement’s Homeland Security Investigations conducted the coordinated raids “at seven agricultural processing plants across Mississippi,” according to an ICE statement. In addition to the arrests, agents seized company business records.

More than 600 ICE agents were involved in the raids, surrounding the perimeters of the targeted plants to prevent workers, mainly Latino immigrants, from escaping. The actions were centered onplants near Jackson owned by five companies. [NPR story] [Nov 2019 follow-up story]

August 7, 2019: without any public announcement, the US Citizenship and Immigration Services eliminated a “deferred action” program that had allowed immigrants to avoid deportation while they or their relatives were undergoing lifesaving medical treatment. The agency said that it received 1,000 deferred-action applications related to medical issues each year.

The policy change was the latest in a series of moves by the Trump administration to revoke or modify procedures that had allowed certain immigrants to remain in the United States on humanitarian grounds. In addition to those with serious medical conditions, they included crime victims who had helped law enforcement with investigations and caretakers of sick children or relatives.  (next IH, see Aug 21; deferred, see Sept 2)