August 28, 1917: woman suffragists picket President Woodrow Wilson in front of the White House. They demanded that he support an amendment to the Constitution that would guarantee women the right to vote.

Wilson had a history of lukewarm support for women’s suffrage, although he paid lip service to suffragists’ demands during political campaigns and greeted previously peaceful suffrage demonstrators at the White House with decorum. He was also a former teacher at a women’s college and the father of two daughters who considered themselves “suffragettes.” During the 1912 presidential campaign against Theodore Roosevelt, Wilson and his opponent agreed on many reform measures such as child-labor laws and pro-union legislation. They differed, however, on the subject of women’s suffrage, as Roosevelt was in favor of giving women the vote.

According to the Library of Congress’ American Memory archives, Wilson rode out of the White House gates that  morning with his wife at his side and tipped his hat toward the protesters as usual. By this time, though, the suffragists had become increasingly disruptive and brandished anti-World War I slogans on their placards in addition to pleas for the vote and later that day the protesters and outraged bystanders who supported the war clashed. Many of the women were arrested and thrown in jail. (see October)

Emmett Till terrorized and murdered

August 28, 1955: at approximately 2:30 in the morning Carolyn Bryant’s husband, Roy, his half brother J.W. Milam kidnapped Emmett Till from Moses Wright’s home. They then brutally beat, dragged him to the bank of the Tallahatchie River, shot him in the head, tied him with barbed wire to a large metal fan and shoved his mutilated body into the water.

August 28, 1962: Albany, GA police arrested and jailed seventy religious leaders from the North and Midwest during an anti-segregation protest at the City Hall. (see Albany for expanded story)

Martin Luther King, Jr delivered his “I Have a Dream” speech.

Referring to the March as the “Farce on Washington, Malcolm X afterwards stated: If you’re going to get yourself a .45 and start singing “We Shall Overcome,” I’m with you. (next BH, see Aug 30, ; next MX, see Oct 11; next MLK, see Oct 10)

Janice Wylie, a 21-year-old Newsweek magazine researcher and summer stock actress, and Emily Hoffert, a 23-year-old teacher, were stabbed to death in the apartment they shared at 57 E. 88th Street in Manhattan; Wylie was raped. Wylie is the daughter of Max Wylie, a New York novelist, playwright, and advertising executive. Hoffert is the daughter of a Minneapolis surgeon. The media will call it the Career-Girl Murders.

George Whitmore, Jr listened to King’s speech in his Wildwood, NJ home, but in seven months, Whitmore, an African-American drifter with a limited IQ, will be picked out of a photo lineup by a woman who had been assaulted. (next BH, see Aug 30; see Whitmore for the rest of the long sad story) 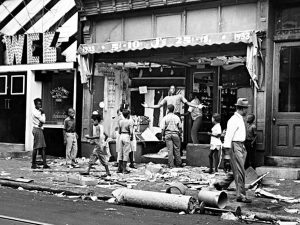 August 28, 2013:  Shellie Zimmerman, the wife of George Zimmerman pleaded guilty to a misdemeanor charge of perjury. She was placed on probation for one year, was required to perform 100 hours of community service, and must pay court costs. She also had to file a letter of apology within 30 days to Judge Kenneth Lester, who presided over her husband’s case at the time the perjury was committed. Recorded jailhouse phone calls between the couple caught the two speaking in code about their finances. By pleading guilty to a lesser charge of perjury not in an official proceeding, she avoided the original third-degree felony offense — perjury during an official proceeding — that could have meant time in prison. (see Sept 4)

August 28, 2016: Kaepernick met with the media two days after the game and for the first time since the protest gained national attention. He reiterated that he was acting to give a voice to people who didn’t have one.

“I’m going to continue to stand with the people that are being oppressed. To me, this is something that has to change. When there’s significant change and I feel that flag represents what it’s supposed to represent, and this country is representing people the way that it’s supposed to, I’ll stand.” (see Sept 11)

After the well received acoustic half came to an end with “Mr. Tambourine Man”, the band set up for the second half. No doubt the crowd was gearing up for the hostility that was to follow. The crowd is so loud and belligerent at times that it becomes extremely hard to hear the music, but what can be heard is awesome. Levon lays down a muscular beat that drives the music forward and Robbie plays tough blues licks as only he can. Al Kooper pretty much plays the way only Al Kooper can. [Press Music article] (see Aug 30) 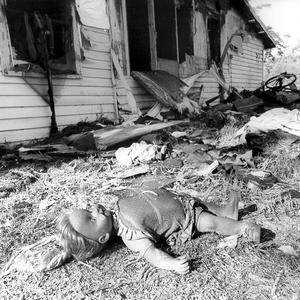 August 28, 1987: a fire of suspicious origin destroyed the home of a couple whose three sons were hemophiliacs known to have been exposed to the virus that caused acquired immune deficiency syndrome (AIDS). The fire capped a week of bomb and death threats against Clifford and Louise Ray, and their daughter and three sons, and a boycott of local schools. The boycott had been prompted by the Aug. 24 return to school of the three boys after a year’s absence.  (Rays, see Aug 29)

August 28, 1987: the Reagan administration adopted a formal policy barring visas to people with the HIV infection. The policy was one of several similar policies that reflected both an indifference to the HIV/AIDS crisis and hostility to homosexuality.The policy was finally rescinded by the administration of President Barack Obama on January 5, 2010 when the Department of Health and Human Services (HHS) and the Centers for Disease Control (CDC) removed HIV from the list of diseases that barred people from obtaining visas to enter the U.S. [AIDS timeline] (AIDS, see Aug 29; LGBTQ, see see June 22, 1988; IH, see October 30, 2009)

August 28, 2013: the nation’s largest private employer,announced that it will soon offer a full suite of benefits to its employees’ domestic partners, including those of the same sex. The change would take effect in all 50 states, independent of each state’s definition of what marriage, domestic partnership or civil union entails. The retail giant sent postcards to its staffers outlining changes to their health insurance policies for 2014, including news that “full-time associates can cover any spouse or domestic partner,” regardless of gender. [USA Today article] (see August 29)

August 28, 2003: the Supreme Court of Alabama removed a monument of the Biblical Ten Commandments from its courthouse rotunda. The monument had been installed on the orders of Chief Justice Roy Moore, triggering a federal lawsuit. In Glassroth v. Moore, the federal District Court for the Middle District of Alabama ordered Moore to remove the monument. This decision was upheld on appeal to the Eleventh Circuit. When Moore refused, he was removed from his post by the Supreme Court of Alabama. [Southeast Missourian article] (see November 21, 2011)

August 28, 2014: U.S. District Judge Lee Yeakel threw out new Texas abortion restrictions that would have effectively closed more than a dozen clinics statewide in a victory for opponents of tough new anti-abortion laws sweeping across the U.S.

Yeakel sided with clinics that sued over one of the most disputed measures of a sweeping anti-abortion bill signed by Republican Gov. Rick Perry in 2013. The ruling stops new clinic requirements that would have left seven abortion facilities in Texas come Monday, when the law was set to take effect. (BC, see Sept 1; Texas, see June 27, 2016)