Robert McNamara from the documentary, “The Fog of War.” 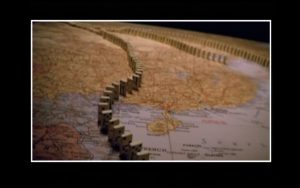 It had been 254 days since President Kennedy’s assassination in Dallas, Texas.

The number of days that President Lyndon B Johnson was president.  November 3, Election Day, 93 days away.  He had signed the landmark Civil Rights Act of 1962 exactly a month earlier.

Vietnam was a mosquito; not a tiger.

Military intelligence had suggested that there might be North Vietnamese military action in the Gulf of Tonkin. The Captain of the destroyer USS Mattox, Captain, John J. Herrick, was on alert.

On this date, Secretary of Defense Robert McNamara reported to President Johnson that North Vietnamese torpedo boats had attacked the Maddox.

Maddox gunners sunk one of the boats and two were crippled. One bullet hit the Maddox and there were no U.S. casualties.

The US took no further action, but warned the Vietnamese to cease such attacks.

Two days later around 8 PM, the Maddox and the USS C. Turner Joy, both in the Gulf of Tonkin, intercepted North Vietnamese radio messages. Captain Herrick got the “impression” that Communist patrol boats are planning an attack against the American ships. He again called for the support of the USS Ticonderoga.

Neither the pilots nor the ship crews saw any enemy craft. However, about 10 p.m. sonar operators reported torpedoes approaching. The destroyers maneuvered to avoid the torpedoes and began to fire at the North Vietnamese patrol boats. The encounter lasted about two hours. U.S. officers reported sinking two, or possibly three of the North Vietnamese boats, but no one was sure.

Herrick communicated his doubts to his superiors and urged a “thorough reconnaissance in daylight.” Shortly thereafter, he informed Admiral U. S. Grant Sharp, commander of the Pacific Fleet, that the blips on the radar scope were apparently “freak weather effects” while the report of torpedoes in the water were probably due to “overeager” radar operators.

Convinced that a second attack had occurred, President Johnson, ordered the Joint Chiefs of Staff to select targets for possible retaliatory air strikes. At a National Security Council meeting, Secretary of Defense Robert McNamara, Secretary of State Dean Rusk, and McGeorge Bundy, Special Assistant to the President for National Security Affairs, recommended the ordering of reprisal attacks to the president.

Though cautious at first, eventually Johnson gave the order to execute the reprisal, code-named Pierce Arrow. The President then met with 16 Congressional leaders to inform them of the second unprovoked attack and that he had ordered reprisal attacks. He also told them he planned to ask for a Congressional resolution to support his actions.

At 11:20 p.m., Admiral Sharp informed McNamara that the aircraft were on their way to the targets and at 11:26, President Johnson appeared on national television and announced that the reprisal raids were underway in response to unprovoked attacks on U.S. warships. He assured the viewing audience that, “We still seek no wider war.” 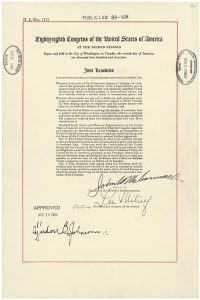 On August 7, the House of Representatives unanimously (416 – 0) and the Senate overwhelmingly (88 – 2) approved the so-called Gulf of Tonkin Resolution. Its title read, “”To promote the maintenance of international peace and security in southeast Asia.” [text]