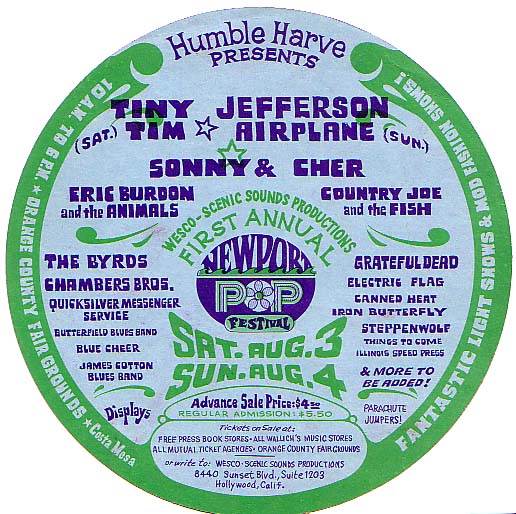 ..we wait for the Woodstock Music and Art Fair’s anniversary to roll around, I figured we could visit a non-1969 festival.

The Newport Pop Festival can cause some confusion because of its name.  Newport, in this case, refers to California’s Newport, not Rhode Island’s. And the event was not held in Newport, California anyway.

Then, neither was Woodstock held in Woodstock!

So this is the 1968 Newport Pop Festival held at the Orange County Fairgrounds in Costa Mesa, California

The promoters, Wesco Productions (West Coast Productions), first selected an outdoor pavilion at the Orange County Fairgrounds. Advanced tickets sales were so successful that Wesco decided to move the site to nearby parking lots.

Woodstock Ventures had three weeks to move their festival 40 miles from Wallkill to Bethel. Wesco had three days to move several hundred yards. Neither completely succeeded.

As with any large event facing such challenges, Newport’s problems included having to bring water to the new site using hoses and then attendees had to bring their own containers to fill up.

Food concessions ran out before the first day ended. Lack of shade in southern California’s August sun made the site unbearable for some.

The line up was a good one with no folk as such, but plenty of blues and rock. Sonny & Cher, though popular for many, did not fit into the mix, though and fans reportedly did not accept them well.

There are no good recordings of any performances. Surprisingly, as ubiquitous as Grateful Dead tapes are, neither they nor any known audience recordings apparently exist, but YouTube does have some silent footage of the Dead with a different date playing over it:

Woodstock Ventures scheduled six of the Newport bands to their little party in Bethel a year later. Five of them got there.

It is always interesting to read an article about an event written at the time of the event. Decades can deglaze  the bit and pieces that others saw firsthand.

Here are a few observations that Digby Diehl of the Los Angeles Times made.