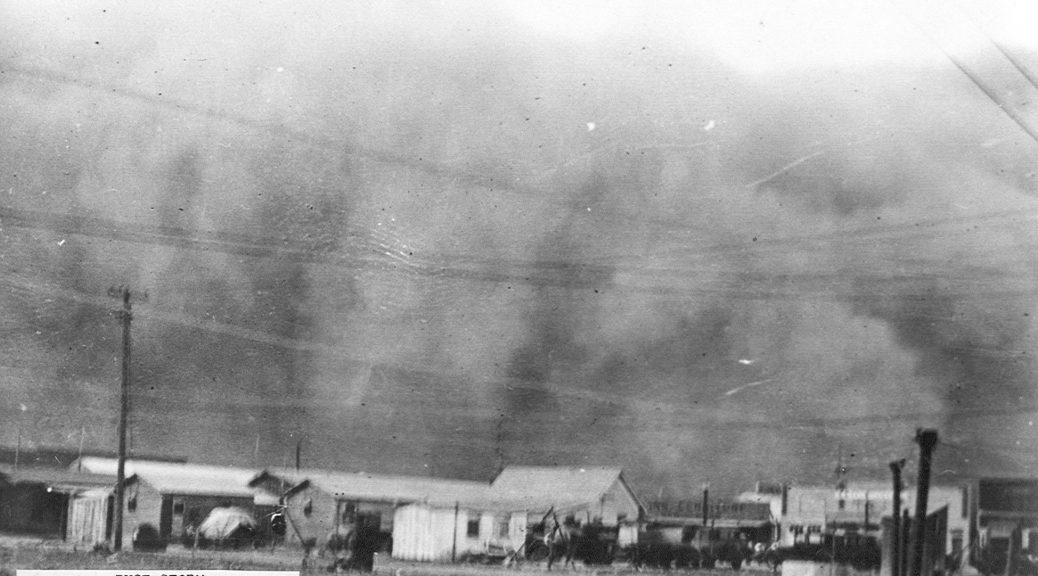 Before then, birthdays in general were not given much emphasis–not even the birth of Christ. The day on which a saint died was considered more significant than their birth, And Christ’s baptism—celebrated on January 6 with the Feast of the Epiphany—received more attention than his birthday.

Why December 25? When a consensus arose in the Roman Catholic Church to celebrate Christ’s conception on March 25th, it was reasonable to celebrate his birth nine months later. 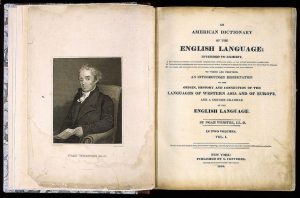 April 14, 1828: Noah Webster, a Yale-educated lawyer with an avid interest in language and education, published his American Dictionary of the English Language. Webster’s dictionary was one of the first lexicons to include distinctly American words. The dictionary, which took him more than two decades to complete, introduced more than 10,000 “Americanisms.” The introduction of a standard American dictionary helped standardize English spelling, a process that had started as early as 1473, when printer William Caxton published the first book printed in English. The rapid proliferation of printing and the development of dictionaries resulted in increasingly standardized spellings by the mid-17th century. (Noah Webster House site bio)  (see March 23, 1839)

April 14, 1775: The Society for the Relief of Free Negroes Unlawfully Held in Bondage (aka, Pennsylvania Abolition Society) founded in Philadelphia, Pennsylvania by Anthony Benezet and others. It was the first American abolition society. Seventeen of the 24 men who attended initial meetings of the Society were Quakers, or members of the Religious Society of Friends. Thomas Paine was also among the Society’s founders. (Paabolition dot org article) (see Nov 12) 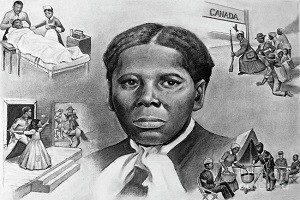 April 14, 1853: Harriet Tubman made her first trip back South to ensure that other slaves won their freedom. She helped hundreds of slaves escape North. She was never caught, despite a $40,000 reward for her capture. (see February 28, 1854)

April 14, 1873: the Louisiana state militia under the control of Republican Governor William Kellogg arrived at the scene and recorded the carnage.  New Orleans police and federal troops also arrived in the next few days to reestablish order.  A total of 97 white militia men were arrested and charged with violation of the U.S. Enforcement Act of 1870 (also known as the Ku Klux Klan Act).   A handful of them were convicted but were eventually released in 1875 when the U.S. Supreme Court in United States v. Cruikshank ruled the Enforcement Act was unconstitutional. (harriet-tubman dot org article) (see June 28, 1874) 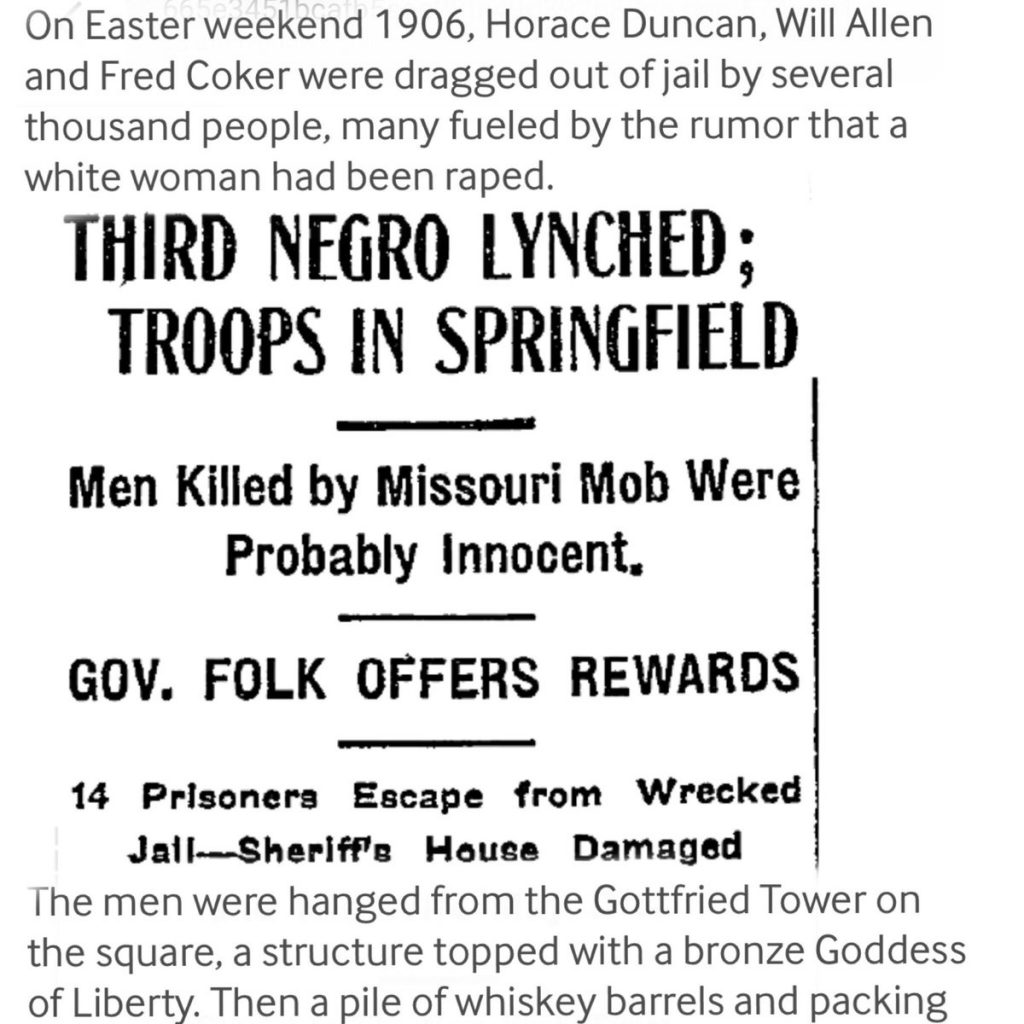 April 14, 1906:  two innocent black men named Horace Duncan and Fred Coker (aka Jim Copeland) were abducted from the county jail by a white mob of several thousand participants and lynched in Springfield, Missouri.

The day before, a white woman reported that two African American men had assaulted her. Despite having “no evidence against them,” local police arrested  Duncan and Coker were “on suspicion.”

Local law enforcement did little to stop the mob from seizing the two men, though the officers were armed. When the mob dragged Duncan and Coker outside, the gathered crowd of nearly 3,000 angry white men, women, and children began shouting, “Hang them!” and “Burn them!”

At the public square, the mob hanged both men from the railing of the Gottfried Tower, then set a fire underneath and watched as both corpses were reduced to ashes in the flames.

Continuing their rampage, the mob returned to the jail and proceeded to lynch another African American man—Will Allen.

Two days after the lynchings, the woman who reported being assaulted issued a statement that she was “positive” that [Mr. Coker and Mr. Duncan] “were not her assailants, and that she could identify her assailants if they were brought before her.”

Four white men were arrested and twenty-five warrants issued, but only one white man was tried and no one was ever convicted.  [EJI article] (next BH, see Sept 22; next Lynching, see February 10, 1908; for for expanded chronology, see American Lynching 2)

April 14, 1933: a meeting of Communists listened in NYC’s Union Square to speakers for the International Labor Defense plead for unity among white persons and Negroes to fight for the release of the “Scottsboro boys.” The meeting attracted approximately 10,000 people. (see Scottsboro or expanded story) 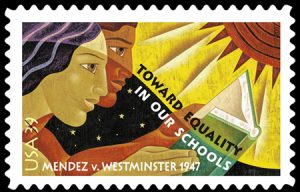 April 14, 1947: Mendez v. Westminster. Five Mexican-American fathers, (Thomas Estrada, William Guzman, Gonzalo Mendez, Frank Palomino, and Lorenzo Ramirez) challenged the practice of school segregation in the U.S. District Court in Los Angeles. They claimed that their children, along with 5,000 other children of “Mexican” ancestry, were victims of unconstitutional discrimination by being forced to attend separate “schools for Mexicans” in the Westminster, Garden Grove, Santa Ana, and El Modena school districts of Orange County.

On February 18, 1946 Senior District Judge Paul J. McCormick, had ruled in favor of Mendez and his co-plaintiffs, finding segregated schools to be an unconstitutional denial of equal protection.

The school district appealed to the Ninth Federal District Court of Appeals in San Francisco, which upheld Judge McCormick’s decision, finding that the segregation practices violated the Fourteenth Amendment.

On April 14, 1947, the US Court of Appeals for the Ninth Circuit affirmed the district court’s ruling, but not on equal protection grounds. It did not challenge the “separate but equal” interpretation of the 14th Amendment announced by the U.S. Supreme Court in Plessy v. Ferguson in 1896. (PBS article) (see January 20, 1951)

April 14, 1964: Minnie Edmonds, a 46-year-old African American cleaning woman and mother of five, was stabbed to death by a man who attempted to snatch her purse near Sutter Avenue and Chester Street in the Brownsville section of Brooklyn.

A year later, on April 14, 1965: Detective Joseph Di Pima testified that George Whitmore, Jr.’s confessions were voluntary, telling the jury, “All I had to say to him was: “What happened next George?” (see Whitmore to expand story) 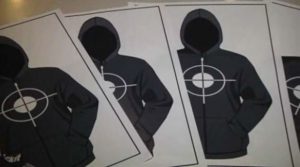 April 14, 2013:  Sgt. Ron King, who had been with the Port Canaveral police force for two years, was fired after it was discovered he was conducting practice with targets resembling Trayvon Martin wearing a hoodie, reports CBS Orlando affiliate WKMG. “Whether it was his stupidity or his hatred, (this is) not acceptable,” said Port Authority interim CEO Jim Walsh. Walsh said it happened at a training exercise earlier this month. King was teaching a shooting course to other officers and allegedly had the posters in his patrol car. (BH, see Apr 18; Martin, see June 20) 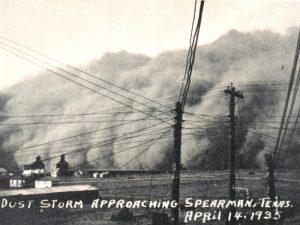 April 14, 1935: another devastating storm of the Dust Bowl era. High winds kicked up clouds of millions of tons of dirt and dust so dense and dark that some eyewitnesses believed the world was coming to an end.

The day is known as “Black Sunday,” when a mountain of blackness swept across the High Plains and instantly turned a warm, sunny afternoon into a horrible blackness that was darker than the darkest night. Famous songs were written about it, and on the following day, the world would hear the region referred to for the first time as “The Dust Bowl.”

The wall of blowing sand and dust first blasted into the eastern Oklahoma panhandle and far northwestern Oklahoma around 4 PM. It raced to the south and southeast across the main body of Oklahoma that evening, accompanied by heavy blowing dust, winds of 40 MPH or more, and rapidly falling temperatures. But the worst conditions were in the Oklahoma and Texas panhandles, where the rolling mass raced more toward the south-southwest – accompanied by a massive wall of blowing dust that resembled a land-based tsunami. Winds in the panhandle reached upwards of 60 MPH, and for at least a brief time, the blackness was so complete that one could not see their own hand in front of their face. It struck Beaver around 4 PM, Boise City around 5:15 PM, and Amarillo at 7:20 PM. (PBS American Experience article) (see April 16, 1947)

April 14, 2010:   six days before the explosion, Brian Morel, a BP drilling engineer, emailed a colleague “this has been a nightmare well which has everyone all over the place.” (see Apr 20)

April 14, 2015: President Barack Obama notified Congress that he intended to remove Cuba from the list of state sponsors of terrorism. Obama submitted a statutorily required report to Congress on this date saying that he intended to rescind Cuba’s designation. Obama was required to submit the report to Congress 45 days before the designation would be officially rescinded. (see May 19; Cuba, see May 29)

April 14, 1962: during a weekend furlough, Hendrix and Billy Cox go to Indianapolis to enter a talent contest. After many delays in getting back to base, Hendrix failed to report for bed check. Hwas was given fourteen days of restriction between April 16 and 29. (see Hendrix military for expanded chronology)

April 14, 1969: 1968 Oscars held. No host. This year was the first in which the telecast on television was beamed worldwide – to 37 nations. Best Picture award Oliver.

The Ballad of John and Yoko

April 14, 1969: Paul and John recorded of ‘The Ballad of John and Yoko.’ Paul played bass, drums and piano with John on guitars and lead vocals. The song was banned from many radio stations as being blasphemous. On some stations, the word ‘Christ’ was edited in backwards to avoid the ban. (see May 9) (see Ballad for expanded story)

April 14, 1965: the Joint Chiefs of Staff ordered the deployment of the 173rd Airborne Brigade from Okinawa to South Vietnam. The 173rd arrived in Vietnam in May 1965 and was the first major U.S. Army ground combat unit committed to the war. (see Apr 17)

April 14, 1967: private citizen Richard Nixon visited Saigon and stated that anti-war protests back in the U.S. were “prolonging the war.” In San Francisco and New York thousands march against the Vietnam War. (see Apr 15)

April 14, 1970: President Nixon nominated Harry Blackmun to the Supreme Court. He is best known as the author of the Court’s opinion in Roe v. Wade. (Oyez article on Blackmun) (see May 12) 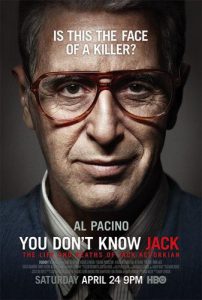 April 14 , 2010: the HBO film You Don’t Know Jack premiered at the Ziegfeld Theater in New York City. Kevorkian walked the red carpet alongside Al Pacino, who portrayed him in the film. Pacino received Emmy and Golden Globe awards for his portrayal, and personally thanked Kevorkian, who was in the audience, upon receiving both of these awards. Kevorkian stated that both the film and Pacino’s performance “brings tears to my eyes – and I lived through it”. (see Kevorkian for expanded story)

April 14, 2014: Maryland Governor Martin O’Malley signed a bill into law that decriminalized the possession of small amounts of marijuana. The bill made possession of less than 10 grams of marijuana a civil offense punishable by a fine of up to $100 for a first offense, up to $250 for a second offense, and up to $500 for subsequent offenses. Third-time offenders and individuals under 21 years of age would be required to undergo a clinical assessment for substance abuse disorder and a drug education program. (Washington Post article) (see Apr 28 or see CCC for expanded chronology)

April 14, 2017: the Arkansas Supreme Court granted an emergency stay of execution for Bruce Ward and less than two hours later an Arkansas circuit judge issued a temporary restraining order the executions of six other murderers. The judge’s restraining order barred the state from administering one of three drugs it planned to use in the executions, which were scheduled to begin on Monday and stretch over 11 days. An eighth inmate who had been scheduled to die also won a stay earlier, removing him from the list for April execution. (see Apr 20)

April 14, 2021: the Biden administration set a new timetable for withdrawal: it said it would begin pulling out its remaining 3,500 troops on May 1 and complete the pullout at the latest by September. 11 — the 20th anniversary of the al-Qaida terror attack on the U.S. that had triggered the U.S.-led invasion of Afghanistan. NATO announced it would follow the same timetable for withdrawing nearly 10,000 troops.

In leaving, Washington calculated that it could manage its chief security interest — ensuring Afghanistan doesn’t become a base for terror attacks on the United States — from a distance. [AP article]   (next Afghanistan, see Aug 31)