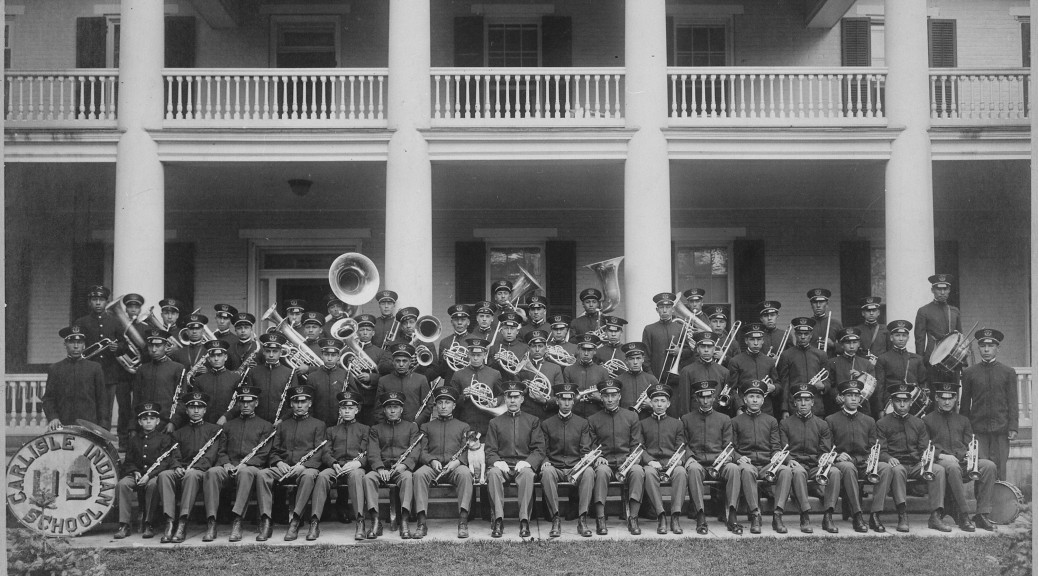 November 1, 1835: in the nation’s first general strike for a 10-hour day, 300 armed Irish longshoremen marched through the streets of Philadelphia calling on other workers to join them.  Some 20,000 did, from clerks to bricklayers to city employees and other occupations. The city announced a 10-hour workday within the week; private employers followed suit three weeks later. [Ency of Philadelphia article] (see March 31, 1840)

November 1, 1879: founded by Richard Henry Pratt, The Carlisle Indian School formally opened (in Carlisle, PA) with an enrollment of 147 students. The youngest was six and the eldest twenty-five, but the majority were teenagers. Two-thirds were the children of Plains Indian tribal leaders. The first class was made up of eighty-four Lakota, fifty-two Cheyenne, Kiowa and Pawnee, and eleven Apache. Pratt believed that the only road to success for the Native Americans was to assimilate them to the American culture. He was often quoted as saying “Kill the Indian, save the man”. NPR’s Radio Lab did a piece on the school. The following picture comparisons are from RL’s site. Click for others >>> Radio Lab) (next NA, see July 20, 1881)

One of the state constitution’s framers, Democrat James K. Vardaman, who would go on to become governor and a US Senator, saw no need to hide his disdain for Black Americans.

“Mississippi’s constitutional convention of 1890 was held for no other purpose than to eliminate the n****r from politics,” he once said.

Many other states followed Mississippi’s lead. (next BH, see Nov 4)

On September 18, 1945 in Gary, Indiana, mounting pressure from civic groups such as the League of Women Voters, YWCA, and Gary Teacher’s Union to desegregate schools pushed district officials to make another attempt (see September, 1927) at integration. Again, white students took to the streets en masse in an effort to curb integration. On November 1, 1945, in an effort to win over white students against school desegregation, Gary officials invited Frank Sinatra to perform. Though very popular with teenagers, Sinatra’s appeal failed to get students back to school. [Time article] (BH, see Dec 16; SD, see September 1946)

November 1, 1961: November 1st was the day the Interstate Commerce Commission’s new prohibition against segregated bus terminals was to go into effect. This was the ruling won by the Freedom Rides.

The Albany, Georgia bus terminal was located in the Black section of town and on November 1st — with a neighborhood crowd watching — nine Black students attempted to use the terminal’s “white-only” facilities. As planned, they leave without being arrested when ordered out by the police and then filed immediate complaints with the ICC under the new ruling. (BH, see Nov 9; FR, see Nov 29)

November 1, 1963: the “Freedom Vote” on this day was a mock election in Mississippi involving officially unregistered African American voters. The event was organized by the Student Nonviolent Coordinating Committee (SNCC) to dramatize the fact that only 7 percent of the potentially eligible African-American voters were actually registered.

The Freedom Vote was considered a success by SNCC leaders, and it inspired the idea for a larger effort in the summer of 1964. This became Freedom Summer, in which about 1,000 white northern college students were recruited to help African-Americans register to vote. (see Nov 19)

November 1, 2018: Kayla Morris, of Antioch, California and a member of Gold Rush, the San Francisco 49ers cheerleader,  appeared to take a knee during the national anthem. It was the first time that an NFL cheerleader had done so. (see February 15, 2019)

November 1, 2019: fifty-one years after the U.S. Olympic Committee vilified Tommie Smith and John Carlos for taking a stand against racism and discrimination, banishing them from the Mexico City team and leaving them to face scorn and condemnation at home, it changed its mind. The Committee inducted Smith and Carlos into the U.S. Olympic and Paralympic Hall of Fame, an honor bestowed because of their “character, conduct and off-field contributions,” as well as their athletic achievements. [NBC Sports story] (next BH, see Nov 2)

From 1947 – 1949: Joe McCarthy accepted kickbacks from Pepsi Cola totaling $20,000 in exchange for helping Pepsi to circumvent the post-war sugar rationing.   He also received another $10,000 from entrepreneurs in the pre-fabricated housing industry.  Shortly thereafter, McCarthy joined the Senate Housing Committee and went on the road to speak out against public housing for veterans, extolling the benefits of the pre-fabricated home and offering it as an alternative. (FH, see May 3, 1948: RS, see Feb 17)

The Red Scare & the Cold War

November 1, 1948: the famous Smith Act trial began, one of the major events of the Cold War, involved the prosecution of eleven leaders of the Communist Party for violating the Smith Act (enacted on June 29, 1940), which outlawed advocating the overthrow of the government. (FS, see Dec 10; Red Scare, see Nov 2; trial, see October 10, 1949) 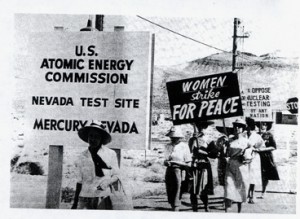 November 1, 1961: thousands of women throughout the United States demonstrated in protest against nuclear weapons. The rallies were organized by Women Strike for Peace, founded by Bella Abzug and Dagmar Wilson. WSP’s guiding statement, adopted in 1962: “We are women of all races, creeds and political persuasions. We are dedicated to the purpose of complete and general disarmament. We demand that nuclear tests be banned forever, that the arms race end and the world abolish all weapons of destruction under United Nations safeguards. We cherish the right and accept the responsibility to act to influence the course of goverment for peace. … We join with women throughout the world to challenge the right of any nation or group of nations to hold the power of life and death over the world.”  [Swarthmore article] (see May 31, 1962)

November 1, 1957: in the case of United States v. 31 Photographs, a U.S. District Court judge cleared the way for importation of 31 photographs that the Alfred Kinsey had sought to import for his scientific research on sexuality. The judge ruled that the photographs could be brought into the U.S. because they were material for scientific study and not public consumption. The decision ended a three-year battle over the photographs.

While the decision was a victory for Kinsey and his research, it was a very limited one with respect to censorship of sexually related materials, given its narrow focus on research materials. (see May 6, 1959)

November 1, 1968: the Motion Picture Producers Association (MPPA), struggling to adapt to both anti-censorship court decisions and more tolerant public attitudes regarding sexuality in the movies — but not willing to abandon all restraints — put into effect a new movie ratings system. The categories were G, PG, R and X. [Wikipedia article] (see Nov 12)

November 1, 2017: Papa John’s Founder and CEO John Schnatter claimed that the NFL kneeling protests were costing the company lots of money. Papa John’s had been an official NFL sponsor since 2010, but has seen its stock drop 24 percent in 2017

November 1, 2018: a San Francisco 49ers cheerleader appeared to take a knee during the national anthem. It was the first time that an NFL cheerleader had done so. (Colin K,  see February 15, 2019)

November 1, 1963: in a speech before The New England Conference on the Defense of Indigent Persons accused of Crime, Attorney General Robert Kennedy stated: “If an obscure Florida convict named Clarence Earl Gideon had not sat down in prison with a pencil and paper to write a letter to the Supreme Court, and if the Supreme Court had not taken the trouble to look for merit in that one crude petition among all the bundles of mail it must receive every day, the vast machinery of American law would have gone on functioning undisturbed.” (see Gideon for expanded story)

November 1, 1968: after three-and-a-half years, Operation Rolling Thunder comes to an end. In total, the campaign had cost more than 900 American aircraft, 818 pilots dead or missing, and hundreds in captivity. Nearly 120 Vietnamese planes had been destroyed in air combat or accidents, or by friendly fire. According to U.S. estimates, 182,000 North Vietnamese civilians were killed. Twenty thousand Chinese support personnel were also casualties of the bombing. (see Nov 5)

November 1, 1968: the southern region of North Vietnam was removed from the Operation concurrent with a halt to conventional bombing of North Vietnam. (see Popeye for expanded story)