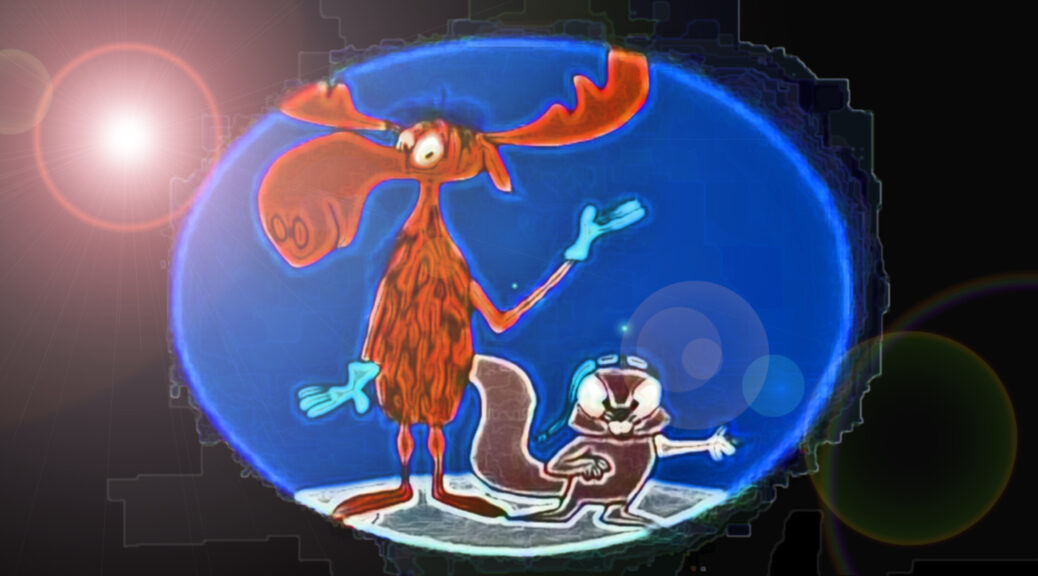 November 19, 1915: Utah executed Joe Hill. After a questionable arrest and controversial trial, a Utah jury convicted Joe Hill of murder and a firing squad executed him [legend has it that he yelled “Fire!”.]  Joe Hill wrote his will in verse:

His cremated remains were sent to the IWW headquarters in Chicago He had requested that friends spread his ashes in every state except Utah. He “didn’t want to be caught dead there.”

November 19, 1959: The Rocky & Bullwinkle Show began. It comically reflected the cultural Cold War between the USSR and the USA. (see Dec 1)

November 19, 1963: Kennedy had settled the Cuban crisis, in part, by pledging that the US would not invade Cuba; however that pledge was conditioned on the presumption that Castro would stop trying to encourage other revolutions like his own throughout Latin America. But Castro was furious that Khrushchev had not consulted him before making his bargain with Kennedy to end the crisis — and furious as well that U.S. covert action against him had not ceased. In September 1963, Castro appeared at a Brazilian Embassy reception in Havana and warned, “American leaders should know that if they are aiding terrorist plans to eliminate Cuban leaders, then they themselves will not be safe.” Late on Tuesday, November. 19, 1963 — the evening before President Kennedy’s final full day at the White House — the C.I.A.’s covert action chief, Richard Helms, brought J.F.K. what he termed “hard evidence” that Castro was still trying to foment revolution throughout Latin America.

Standing in the Cabinet Room near windows overlooking the darkened Rose Garden, Helms brandished what he called a “vicious-looking” rifle and told the president how its identifying Cuban seal had been sanded off. (see Cuban Missile Crisis)

November 19, 1985: for the first time in eight years, the leaders of the Soviet Union and the United States held a summit conference. Meeting in Geneva, President Ronald Reagan and Soviet leader Mikhail Gorbachev produced no agreements, however, the meeting boded well for the future, as the two men engaged in long, personal talks and seemed to develop a sincere and close relationship. (see February 28, 1987)

November 19, 1963: police investigated a dynamite-bomb explosion in a street four blocks from the University of Alabama dormitory where Vivian Malone lived. (see Dec 22)

November 19, 1966: on a return trip from Nairobi, Kenya, Paul McCartney got the idea for the Sgt Pepper’s Lonely Heart Band album. From Many Years From Now by Barry Miles, Paul is quoted: We were fed up with being the Beatles. We really hated that fucking four little mop-top boys approach. We were not boys, we were men. It was all gone, all that boy shit, all that screaming, we didn’t want any more, plus, we’d now got turned on to pot and thought of ourselves as artists rather than just performers. There was now more to it; not only had John and I been writing, George had been writing, we’d been in films, John had written books, so it was natural that we should become artists.

Then suddenly on the plane I got this idea. I thought, Let’s not be ourselves. Let’s develop alter egos so we’re not having to project an image which we know. It would be much more free. What would really be interesting would be to actually take on the personas of this different band. We could say, ‘How would somebody else sing this? He might approach it a bit more sarcastically, perhaps.’ So I had this idea of giving the Beatles alter egos simply to get a different approach; then when John came up to the microphone or I did, it wouldn’t be John or Paul singing, it would be the members of this band. It would be a freeing element. I thought we can run this philosophy through the whole album: with this alter-ego band, it won’t be us making all that sound, it won’t be the Beatles, it’ll be this other band, so we’ll be able to lose our identities in this. (see Nov 24)

“You Keep Me Hanging On”

November 19 – 23, 1967: Hill 875. the Battle of Đắk Tô was a series of engagements in Kon Tum Province, in the Central Highlands. The hallmark of the battles centered around Hill 875, which the American forces began to attack on November 19.

The PAVN (People’s Army of Vietnam also known as the Vietnamese People’s Army (VPA)) was well-concealed and waited until the majority of the troops were near the top of the hill before opeing fire. The PAVN was also concealed behind the American troops.

In one of the worst friendly fire incidents of the Vietnam War a Marine Corps fighter-bomber dropped two 500-pound bombs into the American’s perimeter. One of the bombs exploded, a tree burst above the center of the position, where the combined command groups, the wounded, and the medics were all located. It killed 42 men outright and wounded 45 more,

The battle continued with air and artillery support for four more days and the Marines took Hill 875 on November 23—Thanksgiving Day.

The night before (November 22) the PAVN had gone down the other side of Hill 875 and into Cambodia and Laos.

First Lieutenenant Matthew Harrison later recalled, “To take tops of mountains in a triple-canopy jungle along the Cambodian-Laotian border accomplished nothing of any importance. The batttle for Hill 875 was a microcosm of what we were doing and what went wrong in Vietnam. There was no reason to take that hill. And I doubt that there’s been an American on Hill 875 since November 23. We accomplished nothing.” (see Nov 20)

November 19, 1975 : Warner Brothers’ One Flew Over the Cuckoo’s Nest  opened. Directed by Milos Forman and based on Ken Kesey’s 1962 novel. Jack Nicholson starred. Actor Michael Dougles was a co-producer. The film went on to become the first film in four decades to win in all five of the major Academy Award categories: Best Actor (Nicholson), Best Actress (Louise Fletcher, who played Nurse Ratched), Best Director, Best Screenplay (Adapted) and Best Picture. (see May 31, 1996)

November 19, 1986,: at a press conference, President Ronald Reagan misstated facts in the Iran-Contra affair, which had just been exposed two weeks earlier on November 3, 1986. It was plainly evident that Reagan did not know or understand the details of the complicated affair, and certainly not the legal implications, which involved a number of violations of law. President Reagan and his CIA Director William Casey were fierce anti-communists, determined to fight what they saw as communist threats anywhere in the world. They were both committed to this effort, even if it meant violating the law and established policies, as the Iran-Contra affair revealed. (see Nov 21)

After the sentencing hearing, in which Judge Hampton rejected the prosecution’s recommendation that Bednarski be sentenced to life imprisonment, a reporter published an interview in which Judge Hampton said he was lenient because, “I put prostitutes and gays at about the same level . . . I’d be hard put to give somebody life for killing a prostitute.” Judge Hampton went on to blame Trimble and Griffin for their own deaths, reasoning that they would not have died “if they hadn’t been cruising the streets picking up teenage boys.” Judge Hampton continued, “I don’t care much for queers running around on weekend picking up teenage boys. I’ve got a teenage boy.”

Following publication of the interview, the Texas Commission on Judicial Conduct investigated and concluded that Judge Hampton was an impartial judge. After many complaints, the commission agreed to censure Hampton but refused to require his removal. Judge Hampton was re-elected by the residents of Dallas in 1990 and 1994, and retired in 1996.

“The court hereby declares that Montana’s laws that ban same-sex marriage … violate plaintiffs’ rights to equal protection of the laws as guaranteed by the Equal Protection Clause of the Fourteenth Amendment to the United States Constitution,” wrote Morris, who ordered the state to proceed with same-sex marriage and to recognize those gay weddings performed out-of-state. [Reuters article] (see Nov 20) November 19, 2013:  in a 4-3 decision issued, the Supreme Court of Ohio upheld the termination of John Freshwater.

The case began in 2008, when a local family accused Freshwater, a Mount Vernon, Ohio, middle school science teacher, of engaging in inappropriate religious activity and sued Freshwater and the district. Based on the results of an independent investigation, the Mount Vernon City School Board voted to begin proceedings to terminate his employment. After thorough administrative hearings that proceeded over two years and involved more than eighty witnesses, the presiding referee issued his recommendation that the board terminate Freshwater’s employment with the district, and the board voted to do so in January 2011.

In its decision, the court wrote:  After detailed review of the voluminous record in this case, we hold that the court of appeals did not err in affirming the termination. The trial court properly found that the record supports, by clear and convincing evidence, Freshwater’s termination for insubordination in failing to comply with orders to remove religious materials from his classroom. Accordingly, based on our resolution of this threshold issue, we need not reach the constitutional issue of whether Freshwater impermissibly imposed his religious beliefs in his classroom. We affirm the judgment of the court of appeals because there was ample evidence of insubordination to justify the termination decision.(see March 3, 2014)

November 19, 2013: lawyers for Terry Jones entered a written plea of not guilty on Jones’ behalf. Assistant State Attorney Brad Copley said he’s continuing to work with Jones’ lawyers on a plea agreement, but they haven’t reached total accord in that effort. (see April 8, 2014)

November 19, 2018: Judge Jon S. Tigar of the United States District Court in San Francisco ordered the Trump administration to resume accepting asylum claims from migrants no matter where or how they entered the United States, dealing at least a temporary setback to the president’s attempt to clamp down on a huge wave of Central Americans crossing the border.

Tigar issued a temporary restraining order that blocked the government from carrying out the recently proclaimed rule that denied protections to people who entered the country illegally. The order, which suspended the rule until the case was decided by the court, applies nationally.

“Whatever the scope of the president’s authority, he may not rewrite the immigration laws to impose a condition that Congress has expressly forbidden,” Tigar wrote in his order. [NYT report] (see Nov 25)

“What I heard was inappropriate, and I reported my concerns to Mr. Eisenberg,” Colonel Vindman said, referring to John Eisenberg, the top lawyer at the National Security Council. “It is improper for the president of the United States to demand a foreign government investigate a U.S. citizen and political opponent.” [NYT article] (see Trump Public for expanded chronology)