November 5, 1872:  to test the argument advanced by many feminists that the Fourteenth and Fifteenth Amendments guarantee women the right to vote, Susan B. Anthony attempted to vote in the 1872 presidential election. Anthony had consulted Judge Henry R. Selden before attempting voter registration in Rochester, New York. He concurred with Francis Minor’s [a lawyer and the husband of Virginia Minor (the president of the Woman Suffrage Association]  reading of the Fourteenth Amendment and provided a written opinion saying so. Anthony took the written opinion with her and threatened the registrars with a lawsuit if she were turned away. Anthony and 14 other women registered, and they voted in the presidential election. (F & VR, see Nov 28)

November 5, 1917: jailed for picketing in front of the White House and demanding the vote,  Alice Paul and Rose Winslow began hunger strike when demands for political prisoner status rejected.

One week later, authorities subjected Paul to force-feeding three times a day and then separated her from other suffrage prisoners by transferring her to the psychiatric ward at District jail for “evaluation” in effort to intimidate and discredit her. (see Nov 6)

November 5, 1946: the trial of those who attack Isaac Woodward ended. By all accounts, the trial was a travesty. The local U.S. Attorney charged with handling the case failed to interview anyone except the bus driver, a decision that Judge Waring, a civil rights proponent, believed was a gross dereliction of duty. Waring later wrote of being disgusted at the way the case was handled at the local level, commenting, “I was shocked by the hypocrisy of my government…in submitting that disgraceful case….”

The defense did not perform better. When the defense attorney began to shout racial epithets at Woodard, Waring stopped him immediately. During the trial, the defense attorney stated to the all-white jury that “if you rule against Shull, then let this South Carolina secede again.” After Woodard gave his account of the events, Shull firmly denied it. He claimed that Woodard had threatened him with a gun, and that Shull had used his nightclub to defend himself. During this testimony, Shull admitted that he repeatedly struck Woodard in the eyes.

On this date after thirty minutes of deliberation, the jury found Shull not guilty on all charges, despite his admission that he had blinded Woodard. The courtroom broke into applause upon hearing the verdict. (see Woodard for expanded story)

November 5, 2007: President George W. Bush awards the Presidential Medal of Freedom to Harper Lee. In his remarks, Bush stated, “One reason To Kill a Mockingbird succeeded is the wise and kind heart of the author, which comes through on every page… To Kill a Mockingbird has influenced the character of our country for the better. It’s been a gift to the entire world. As a model of good writing and humane sensibility, this book will be read and studied forever.” Lee died on February 19, 2016.

November 5, 2008:  in Springfield, Mass., the Macedonia Church of God in Christ, a predominantly black church, which was under construction, was set on fire shortly after the election of President Obama.

November 5, 2018: Judge Domenica Stephenson, the judge presiding over the Laquan McDonald case, denied a motion to dismiss the charges  meaning that the trial of David March, Joseph Walsh, and Thomas Gaffney, three Chicago police officers charged in an alleged conspiracy to cover for Jason Van Dyke after he shot and killed McDonald, was expected to begin on Nov. 26.

November 5, 1964: South Vietnam’s generals decided on a two-tier government structure with a military committee overseen by Duong Van Minh presiding over a regular cabinet that would be predominantly civilian with Thơ as Prime Minister. Minh was named President and Chief of the Military Committee; Thơ was listed as Prime Minister, Minister of Economy, and Minister of Finance. (see Nov 8) 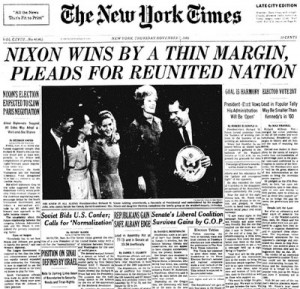 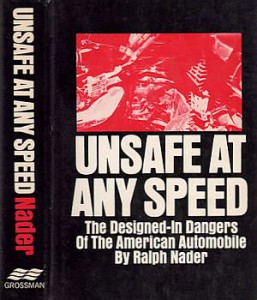 November 5, 1965, Nader’s book Unsafe at Any Speed, was published.  The hardback edition by Grossman was 305 pages long and had a photo of a mangled auto wreck on its cover.  On the back cover, the book’s chapters were listed accompanied by a red-ink headline that stated: “The Complete Story That Has Never Been Told Before About Why The American Automobile Is Unnecessarily Dangerous.”(CP, see January 12, 1966; Nader, see February 10, 1966)

November 5, 1991: the first medical marijuana initiative appeared in the city of San Francisco as Proposition P, which passed with an overwhelming 79% of the vote. Proposition P called on the State of California and the California Medical Association to ‘restore hemp medical preparations to the list of available medicines in California,’ and not to penalize physicians ‘from prescribing hemp preparations for medical purposes.'”

November 5, 1996: California became the first state to legalize medical marijuana. Voters passed the state medical marijuana initiative known as Proposition 215. It permitted patients and their primary caregivers, with a physician’ s recommendation, to possess and cultivate marijuana for the treatment of AIDS, cancer, muscular spasticity, migraines, and several other disorders; it also protected them from punishment if they recommend marijuana to their patients. (AIDS, see April 20, 1998)

November 5, 2013: Portland, Maine, voters approved legalizing recreational marijuana for residents 21 and older. The measure, Question 1, passed with about 70 percent of the vote, making Portland the first East Coast city to legalize recreational pot. Adult residents of Portland — Maine’s largest city — may possess up to 2.5 ounces of marijuana under the referendum. The new measure does not permit the recreational purchase or sale of marijuana, nor does it permit its use in public spaces like parks. (see Nov 12)

November 5, 2006:  Iraq’s High Tribunal found Saddam Hussein guilty of crimes against humanity and sentenced him to hang for the 1982 killing of 148 Shiites in the city of Dujail. (NYT article on Hussain verdict) (see Nov 8)

November 5, 2007: some 12,000 television and movie writers began what was to become a 3-month strike against producers over demands for an increase in pay for movies and television shows released on DVD and for a bigger share of the revenue from work delivered over the Internet  [NYT article] (see February 7, 2008)

November 5, 2013: the Illinois legislature gave same-sex couples the freedom to marry, making Illinois the 15th state (plus the District of Columbia) to do so, and the 9th new marriage state in just the last 12 months. With Illinois, over 37% of the American population lives in a freedom-to-marry state, up from 11% in 2012. [HP article] (see Nov 7)

November 5, 2019: in four new pages of sworn testimony released on this date, Gordon D. Sondland, the United States ambassador to the European Union offered Congress substantial new testimony revealing that he told Andriy Yermak, a top adviser to President Volodymyr Zelensky of Ukraine, that the country likely would not receive American military aid unless it publicly committed to investigations President Trump wanted.

Sondland’s disclosure confirmed his involvement in essentially laying out a quid pro quo to Ukraine that he had previously not acknowledged. [NYT story]

November 5, 2021: the University of Florida abruptly reversed course to allow three professors to testify as paid, subject-matter experts in a voting rights lawsuit against the state.

The university initially denied requests by political science professors Sharon Austin, Michael McDonald and Daniel Smith. The decision deviated from precedent, contradicting previous work UF has approved. Five other professors in law and medicine have also come forward to say they were barred from speaking as experts in their fields in litigation against the state.

University’s president, Kent Fuchs, said in a campus-wide email that he was asking the school’s conflict-of-interest office to reverse its decision and permit the testimony. At least one of the professors confirmed that he was subsequently approved to testify.

“While the University of Florida reversed course and allowed our clients to testify in this particular case, the fact remains that the university curtailed their First Amendment rights and academic freedoms, and as long as the university’s policy remains, those rights and freedoms are at risk,” read a statement from the professors’ attorneys, David A. O’Neil and Paul Donnelly. [NPR story] (next FS, see January 21, 2022)