Taylor testified that a member of his staff overheard a telephone conversation in which Trump pressed Gordon D. Sondland, the United States ambassador to the European Union, on “the investigations.” Afterward, when the aide asked Mr. Sondland about the president’s thoughts on Ukraine, Mr. Sondland said Trump cared more about “investigations of Biden.” [NYT article] 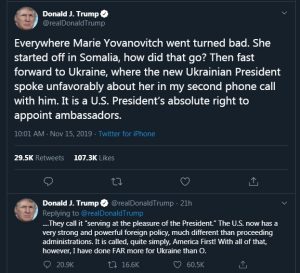 “What I heard was inappropriate, and I reported my concerns to Mr. Eisenberg,” Colonel Vindman said, referring to John Eisenberg, the top lawyer at the National Security Council. “It is improper for the president of the United States to demand a foreign government investigate a U.S. citizen and political opponent.” [NYT article]

November 20, 2019: U.S. Ambassador to the European Union Gordon Sondland told the House Intelligence Committee on the fourth day of public impeachment hearings that it was clear to him that the president was intently interested in having the Ukrainians publicly commit to investigating Democrats, including former Vice President Joseph R. Biden Jr., whose son served on the board of the Ukrainian energy company Burisma.

Sondland told the committee that he and other advisers to Trump pressured Ukraine to investigate Democrats “because the president directed us to do so.”

Sondland said that he, Energy Secretary Rick Perry and Kurt D. Volker, the special envoy for Ukraine, were reluctant to work with Rudolph W. Giuliani, the president’s personal attorney, on the pressure campaign and agreed only at Mr. Trump’s insistence.

November 21, 2019: in her opening statement, the former top Russia expert on the National Security Council Fiona Hill called for Republicans to stop propagating what she called a “fictional narrative” that Ukraine, not Russia, meddled in the 2016 elections. She called the conspiracy claim a story invented by Russian intelligence services to destabilize the United States and deflect attention from their own culpability.

David Holmes, who worked in the United States Embassy in Kyiv told lawmakers that he overheard President Trump, who was speaking loudly, asking Ambassador Sondland whether Ukraine President Zelensky was “going to do the investigation.” Sondland told Trump that Zelensky “loves your ass,” and would conduct the investigation and do “anything you ask him to,”

According to Holmes’s account, Sondland later told him that Trump cared only about “big stuff that benefits the president” like the “Biden investigation” into the son of former Vice President Joseph R. Biden Jr. Mr. Sondland largely confirmed that account on Wednesday but said he did not recall specifically mentioning Mr. Biden. [NYT story]

The refusal to send lawyers continued a pattern of stonewalling by Trump, who had sought to block witnesses and documents, as he and his allies called the proceedings “deranged” and a “witch hunt.” People familiar with the president’s legal strategy had said privately that his lawyers were deeply suspicious of taking part in a process they view as unfair to Trump.  [NYT article]

A fourth witness–Jonathan Turley of George Washington University Law School—said he personally opposed Trump, but differed with the three saying the factual case so far developed against Trump would cheapen impeachment and create a dangerous precedent both for Congress and the executive branch. [NYT article] (see TII/P for expanded chronology)