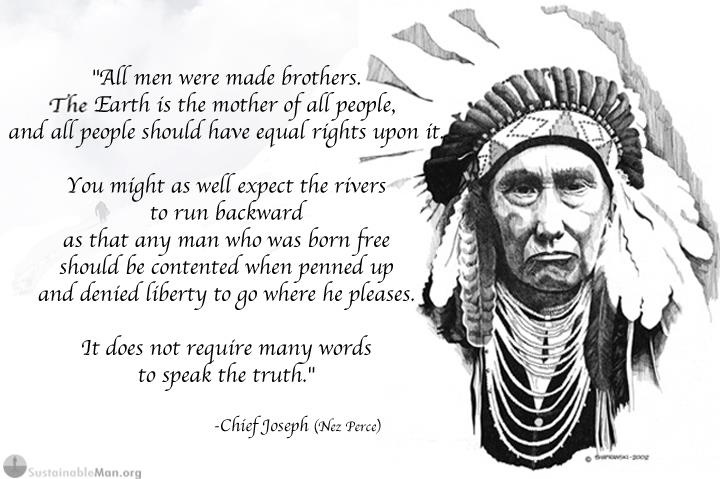 October 5, 1813:  during the War of 1812, General William Harrison’s American army defeated a combined British and Indian force at the Battle of the Thames near Ontario, Canada. The leader of the Indian forces was Tecumseh, the Shawnee chief who organized inter-tribal resistance to the encroachment of white settlers on Indian lands. He was killed in the fighting. Tecumseh’s death marked the end of Indian resistance east of the Mississippi River and soon after most of the depleted tribes were forced west. (see March 3, 1819)

October 5, 1877: Chief Joseph of the Nez Perce Indians surrendered to U.S. General Nelson A. Miles in the Bear Paw mountains of Montana, declaring, “Hear me, my chiefs: My heart is sick and sad. From where the sun now stands, I will fight no more forever.”

Earlier in the year, the U.S. government broke a land treaty with the Nez Perce, forcing the group out of their homeland in Wallowa Valley in the Northwest for relocation in Idaho. In the midst of their journey, Chief Joseph learned that three young Nez Perce warriors, enraged at the loss of their homeland, had massacred a band of white settlers. Fearing retaliation by the U.S. Army, the chief began one of the great retreats in American military history.

For more than three months, Chief Joseph led fewer than 300 Nez Perce Indians toward the Canadian border, covering a distance of more than 1,000 miles as the Nez Perce outmaneuvered and battled more than 2,000 pursuing U.S. soldiers. During the long retreat, he treated prisoners humanely and won the admiration of whites by purchasing supplies along the way rather than stealing them. Finally, only 40 miles short of his Canadian goal, Chief Joseph was cornered by the U.S. Army, and his people were forcibly relocated to a barren reservation in Indian Territory.  (see November 1, 1879) October 5, 1920: four black men were killed in Macclenny, Florida, following the death of a prominent young white local farmer named John Harvey. According to news reports at the time, Harvey was shot and killed at a turpentine camp near MacClenny on October 4, 1920. The suspected shooter, a young black man named Jim Givens, fled immediately afterward and mobs of armed white men formed to pursue him. Givens’s brother and two other black men connected to him were questioned and jailed during the search, though there was no evidence or accusation that they had been involved in the killing of Harvey.

Those three men – Fulton Smith, Ray Field, and Ben Givens – were held in the Baker County Jail late into the night until, around 1:00 a.m. on October 5, a mob of about 50 white men overtook the jail and seized the men from their cells. The mob forced the men to the outskirts of town, where they were tied to trees and shot to death. A fourth lynching victim, Sam Duncan, was found shot to death nearby later in the day. Also with no alleged ties to the killing of John Harvey, Duncan was thought to be an unfortunate soul who had encountered a mob seeking Jim Givens and been killed simply for being a black man.

Three days later, the Chicago Defender, a Northern black newspaper, reported that most of the black community of Macclenny had deserted the area in fear of further violent attacks while whites posses continued to search for Jim Givens.  [EJI article] (next BH & next Lynching, see Dec 20;  for for expanded chronology, see American Lynching 2) October 5, 1957: early in the morning a series of dynamite explosions severely damaged the Clinton High School building [Clinton, TN] An estimated 75 to 100 sticks of dynamite had been placed in three locations in the building. No one was injured.

Van Dyke, who was also found guilty of 16 counts of aggravated battery with a firearm. He was found not guilty of official misconduct. Van Dyke’s bond was revoked and sentencing was scheduled for October 31. He left the courtroom with an officer. (B & S, see Oct 25; McDonald, see Nov 27)

October 5, 1947: President Harry Truman made the first-ever televised presidential address from the White House, asking Americans to cut back on their use of grain in order to help starving Europeans. In 1947, television was still in its infancy and the number of TV sets in U.S. homes only numbered in the thousands. (see Oct 14)

October 5, 1957: the Soviet daily newspaper Pravda mentioned Sputnik in a short piece at the bottom of page one. When bold headlines and major stories run in British and American newspapers, the U.S.S.R. realized that the Sputnik program was a huge propaganda tool. (see Nov 3)

October 5 – 9, 1966: Baltimore Orioles against the defending champion Los Angeles Dodgers, with the Orioles sweeping the Series in four games to capture their first championship in franchise history. [Baltimore Sun article]

October 5, 1966:  the Texas Court of Criminal Appeals reversed the murder conviction of Jack Ruby, who was sentenced to death in for the slaying of Lee Harvey Oswald, assassin of President Kennedy. (NYT article) (see January 3, 1967)

October 5, 1966: The Fermi Nuclear Generating Station, less than 40 miles from Detroit, suffered a partial fuel meltdown, although no radioactive material was released. It operated for another nine years before being deactivated. [LAT article] (see January 27, 1967)

October 5,  2019:  the first negotiations in eight months between the Trump administration and North Korea aimed at breaking the logjam over dismantling the North’s nuclear program broke down only hours after they began in Stockholm, the North Koreans said.

“The negotiation did not live up to our expectations and broke down,” the chief North Korean negotiator, Kim Myong-gil, said, according to Yonhap, the South Korean news agency. Mr. Kim added that the United States had arrived “empty-handed” and had “not discarded its old stance and attitude.” (next N/C N, see Dec 13)

October 5, 1986: Eugene Hasenfus is captured by troops of the Sandinista regime in Nicaragua after the plane in which he is flying is shot down; two others on the plane die in the crash. Under questioning, Hasenfus confessed that he was shipping military supplies into Nicaragua for use by the Contras, an anti-Sandinista force that had been created and funded by the United States. Most dramatically, he claimed that operation was really run by the U.S. Central Intelligence Agency (CIA). (see Nov 3) October 5, 1990: Cincinnati jurors took about two hours to acquit the Contemporary Arts Center and its director, Dennis Barrie, of the charge of pandering obscenity for showing sexually explicit photographs that were part of Mapplethorpe’s traveling retrospective, ”The Perfect Moment.” The acquittal was resounding because it took place in a city that has tough laws and a record of vigorously prosecuting obscenity. [NYT article] (see June 22, 1992)

October 5, 2004: some 2,100 supermarket janitors in California, mostly from Mexico, win a $22.4 million settlement over unpaid overtime. Many said they worked 70 or more hours a week, often seven nights a week from 10 p.m. to 9 a.m. Cleaner Jesus Lopez told the New York Times he only had three days off in five years. (see March 23, 2005)

October 5, 2011: thousands of union workers joined protesters marching through the Financial District, resulting in about 200 arrests later in the same evening when dozens of protesters stormed barricades blocking them from Wall Street and the Stock Exchange. Police responded with pepper spray and penned the protesters in with orange netting.  (NYT article)  (see Oct 25)

October 5, 2020: the US Supreme Court declined to hear an appeal in the case of former Kentucky clerk Kim Davis, who was jailed in 2015 after refusing to issue marriage licenses to same-sex couples, after gay marriage became legal.

Although Supreme court justices Clarence Thomas and Samuel Alito said they agreed with the decision not to hear the case, they said it was a “stark reminder of the consequences” of the court’s 2015 Obergefell v Hodges decision. Davis, they claimed, “may have been one of the first victims of this court’s cavalier treatment of religion in its Obergefell decision” and warned: “She will not be the last.”

LGBTQ campaigners and legal experts told of their fears and outrage regarding Thomas and Alito’s “appalling” attack on the 2015 landmark decision enabling same-sex couples to marry.  [Guardian article] (next LGBTQ, see Oct 21)