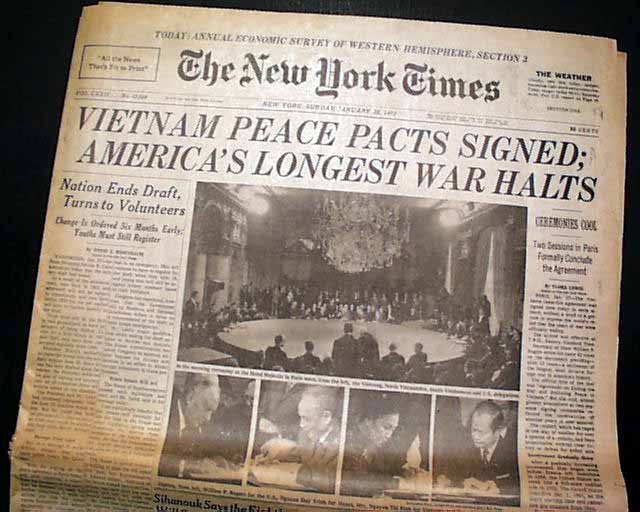 January 27, 1847: more than 100 citizens of Marshall, Michigan, helped Adam Crosswhite and his family, who had escaped slavery, to flee to Canada rather than be captured by bounty hunters. Crosswhite and his family had fled a Kentucky plantation after he learned his four children were going to be sold. When a deputy sheriff arrived, he wound up arresting the bounty hunters, rather than the Crosswhite family, which made it safely to Canada. Later, the family returned to Marshall. Crosswhite’s escape played a part in the passage of the Fugitive Slave Act of 1850. (see Feb 16)

January 27, 1965: The New York Times quotes an unnamed assistant to NY County DA Frank Hogan as saying, “I am positive that the police prepared the confession for George Whitmore, Jr., just as his lawyer charged a few days ago. I am also sure that the police were the ones who gave Whitmore all the details of the killings that he recited to our office.” January 27, 1967:Jefferson County, Alabama sheriff deputies went to the home of Robert Lacey, a black father of six, because Mr. Lacey had failed to take the family dog to the veterinarian after it bit a neighborhood child. The health department had instructed the family to take the dog in for a rabies test, but the family did not own a car and had no means of transporting the animal.

Lacey’s death marked the second black man killed by Jefferson County law enforcement within nine days, and would be one of ten total law enforcement killings of black men in the Birmingham, Alabama, area within a 14 month period spanning from 1966 to 1967. (see Feb 6)

January 27, 1969: a group of Detroit African-American auto workers known as the Eldon Avenue Axle Plant Revolutionary Union Movement led a wildcat strike against racism and bad working conditions. They were critical of both automakers and the UAW, condemning the seniority system and grievance procedures as racist.  (LH, see Dec 31; BH, see Mar 10) On July 16, 1944 Irene Morgan, 27, recovering from a miscarriage, and traveling by bus from Virginia to Baltimore for a doctor’s appointment, refused to relinquish her seat [as well as another black woman] to a white couple.

January 27, 2017: in a Vanity Fair magazine article, Duke University professor Timothy B. Tyson reported that Carolyn Bryant Donham (the woman who accused Till of inappropriate behavior) told him that the story she and others told about Emmett Till were false. Tyson wrote that Donham said of her long-ago allegations—that Emmett grabbed her and was menacing and sexually crude toward her–“that part is not true.” (next BH, see Feb 11; see ET for expanded chronology) January 27, 1951:  the era of US atomic testing in the Nevada desert began as an Air Force plane dropped a one-kiloton bomb on Frenchman Flat. (video via YouTube) (see Mar 6)

January 27, 1967:  President Johnson and counterparts in London and Moscow signed the “Treaty on Principles Governing the Activities of States in the Exploration and Use of Outer Space.” Signatories agree, among other points, that outer space will remain demilitarized (including nuclear weapons), no territorial claims on earth orbit or any planetary bodies will be made and that astronauts or cosmonauts who find themselves landing off course will be returned to their home countries. (see Feb 14)

Lindsay Planer wrote in AllMusic, “History will undoubtedly enshrine this disc as a watershed the likes of which may never truly be appreciated. “

January 27, 1970: John Lennon wrote and recorded “Instant Karma” In his words, “I wrote it for breakfast, recorded it for lunch and we’re putting it out for dinner.” It became the third Lennon single to appear before the official breakup of the Beatles. The only exaggeration in John’s description was the part about dinner: wasn’t actually released to the public until Feb 6. (see Instant Karma for more) (next Beatles, see Mar 8)

January 27, 1965: President Johnson received a memorandum stating that the current Vietnam policy was clearly not working. The Viet Cong were on the move and on the rise and supplied by North Vietnam. The South Vietnam government was unstable as well. (see Feb 7)

January 27, 1968: the subways and elevated trains in Chicago began allowing anti-Vietnam War ads on this day. The Chicago Transit Authority (CTA) had refused to carry the ads for two years. The Illinois ACLU sued on behalf of the Chicago Women for Peace and the North Shore Women for Peace, chapters of the Women Strike for Peace organizations. The federal judge dismissed the suit when the CTA capitulated and agreed to carry the ads. The ad, addressed to President Lyndon Johnson, read: “War is Not Peace. Tyranny is Not Freedom. Hate is Not Love. End the War in Vietnam.” (see Jan 29) January 27, 1967: a fire during routine testing of the Apollo spacecraft (scheduled to be the first manned mission of the Apollo manned lunar landing program, with a target launch date of February 21, 1967) killed three astronauts — Gus Grissom, Ed White and Roger Chafee — in their capsule.

Immediately after the fire, NASA convened the Apollo 204 Accident Review Board to determine the cause of the fire. Although the ignition source was never conclusively identified, the astronauts’ deaths were attributed to a wide range of lethal design and construction flaws in the early Apollo Command Module. The manned phase of the project was delayed for 20 months while these problems were corrected. (Washington Post 50th anniversary article) (see Apr 20)

January 27, 1975: in the wake of the Watergate scandal and the attendant abuses of power by the Nixon administration, and also recent revelations of illegal CIA spying on Americans [in The New York Times on December 22, 1974], the Senate created the Select Committee to Study Governmental Operations with respect to the Intelligence Agencies. Known as the Church Committee after its chair, Senator Frank Church (D–Idaho), the committee held public hearings about abuses by the intelligence agencies, and eventually published 14 reports on violations of the rights of American citizens by the intelligence agencies. The vote to create the committee was 82–4, indicating the depth of disgust over alleged abuses by the FBI and the CIA in the Senate.

The Church Committee reports are still an extremely valuable resource on the history of violations of American rights in the twentieth century. The Church Committee was paralleled by the Pike Committee, created by the House of Representatives on February 19, 1975. Following the revelations about the CIA by the Times, President Gerald Ford tried to head off Congressional investigations by creating the Rockefeller Commission to investigate the CIA on January 4, 1975, but that effort failed when Congress created the two committees.

The Church Committee hearings created sensation after sensation, with revelations of CIA assassination plots, and more. The Church Committee reports are still an invaluable source of information about the abuses of the CIA, the FBI, and other federal agencies. The reports also document the involvement of presidents, both Republican and Democratic, in approving many if not most of the abuses by the intelligence agencies. (see Watergate for its expanded story)

January 27, 1978: the Illinois Supreme Court reversed the Illinois Appellate Court and the Circuit Court of Cook County’s grant of Injunctive Relief in favor of the Village of Skokie and against the Nazi group headed by Frank Collin. The Nazis were free to March in Skokie pending resolution of the federal lawsuit filed by the ACLU on behalf of the Nazis. (see Feb 23)

January 27, 1998: Paula Jones’ attorney, John Whitehead, answered Starr’s subpoena with several documents, possibly including Clinton’s deposition in the Jones suit. Clinton personal secretary, Betty Currie testified before the grand jury. First lady Hillary Rodham Clinton says in a broadcast interview that a “vast right-wing conspiracy” was behind the charges against her husband. A Portland, Ore., man, Andy Bleiler, alleged he had a five-year affair with Lewinsky, and his lawyer promises to turn over documents and items to Starr’s investigators. Clinton delivers his State of the Union address, making no mention of the scandal.

January 27, 1999: in twin 56-44 votes, the Senate refused to dismiss the charges against President Clinton and agreed to seek depositions from Monica Lewinsky, Vernon Jordan and Sidney Blumenthal. (see Clinton for expanded story)

January 27, 2011: a federal jury convicted Matthew Nestor, a former Pennsylvania police officer, of the most serious charge against him in what prosecutors said was a cover-up of the beating death of a Luis Ramirez, a Mexican immigrant. The jury delivered a less severe verdict against a second officer and acquitted a third.

The former officers, Matthew Nestor, Jason Hayes and William Moyer, were accused of helping a group of white teenage football players cover up their parts in the death of Luis Ramírez, an illegal Mexican immigrant who was fatally beaten in July 2008 in Shenandoah, Pa.

January 27, 2017: President Trump suspended entry of all refugees to the US for 120 days, barred Syrian refugees indefinitely, and blocked entry into the United States for 90 days for citizens of seven predominantly Muslim countries: Iran, Iraq, Libya, Somalia, Sudan, Syria and Yemen.

The Department of Homeland Security said that the order also barred green card holders from those countries from re-entering the United States. (BBC piece) (see Jan 28)

January 27, 2017: U.S. District Judge Sam Sparks blocked Texas from requiring that fetal remains to be buried or cremated, saying the rule placed burdens on access to abortion that “substantially outweigh the benefits.”

After hearing two days of testimony early this month, Sparks issued a preliminary injunction that indefinitely prohibited Texas from enforcing the rule, which would have required health facilities to ensure that fetal tissue was buried or cremated — with the ashes buried or appropriately scattered — whether from an abortion or miscarriage.

The rule did not apply to miscarriages at home or to early-term, drug-induced abortions that typically take place at home.

Sparks said the new standards were vague, inviting interpretations that would allow state health officials “to exercise arbitrary, and potentially discriminatory, enforcement on an issue connected to abortion and therefore sensitive and hotly contested.” (see Feb 18)