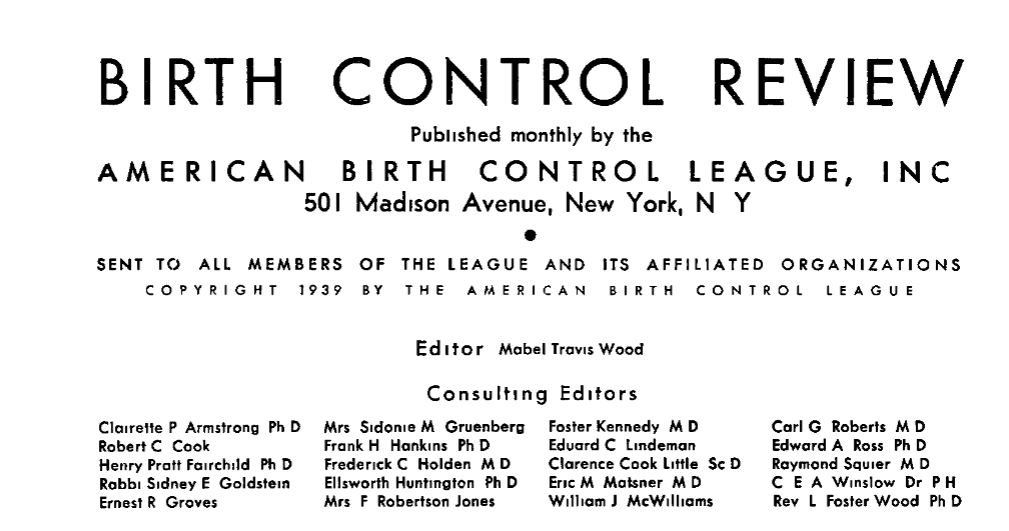 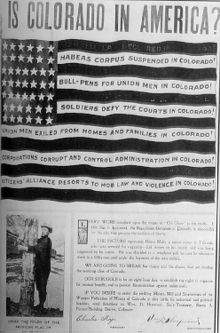 January 18, 1909:  the U.S. Supreme Court ruled in Moyer v. Peabody that a governor and officers of a state National Guard may imprison anyone—in the case at hand, striking miners in Colorado—without probable cause “in a time of insurrection” and deny the person the right of appeal. (see Sept 29)

January 18, 2019: according to a report released by the Department of Labor, the union membership rate–the percent of wage and salary workers who were members of unions–was 10.5 percent in 2018, down by 0.2 percentage point from 2017, the U.S. Bureau of Labor Statistics reported today. The number of wage and salary workers belonging to unions, at 14.7 million in 2018, was little changed from 2017. In 1983, the first year for which comparable union data are available, the union membership rate was 20.1 percent and there were 17.7 million union workers. (see Jan 22)

January 18, 1939: at the 18th annual meeting of the American Birth Control League (ABCL), Margaret Sanger’s organization, the group agreed to merge with the Birth Control Clinical Research Bureau to create the Birth Control Foundation of America. The new group eventually adopted the name Planned Parenthood Foundation, by which it is known today.

Margaret Sanger, the founder of the birth control movement in America, was reportedly furious when the name “Planned Parenthood” was adopted. Throughout her career, she had always refused to accept the use of euphemism for the term “birth control.” 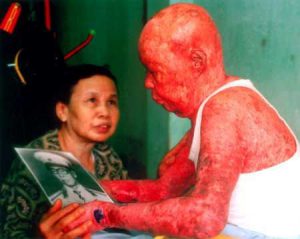 January 18, 1962: the US began spraying foliage with herbicides in South Vietnam, in order to reveal the whereabouts of Vietcong guerrillas. (see Feb 18) 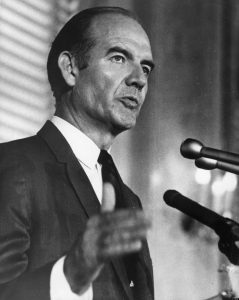 January 18, 1971: in a televised speech, Senator George S. McGovern (D-South Dakota) began his antiwar campaign for the 1972 Democratic presidential nomination by vowing to bring home all U.S. soldiers from Vietnam if he were elected. (see January 31 – February 2) 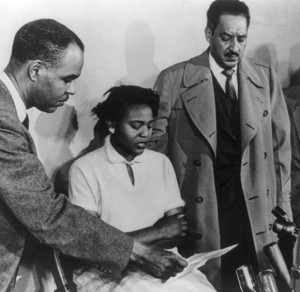 January 18, 1965: B Elton Cox had been the leader of a civil rights demonstration in Baton Rouge, Louisiana, of 2,000 Black students protesting segregation and the arrest and imprisonment the previous day of other Black students who had participated in a protest against racial segregation. The group assembled a few blocks from the courthouse, where Cox identified himself to officers as the group’s leader and explained the purpose of the demonstration.

Following his refusal to disband the group, he led it in an orderly march toward the courthouse. In the vicinity of the courthouse, officers stopped Cox who, after explaining the purpose and program of the demonstration, was told by the Police Chief that he could hold the meeting so long as he confined it to the west side of the street. Cox directed the group to the west sidewalk, across the street from the courthouse and 101 feet from its steps. There, the group, standing five feet deep and occupying almost the entire block but not obstructing the street, displayed signs and sang songs which evoked response from the students in the courthouse jail. Cox addressed the group. The Sheriff, construing as inflammatory appellant’s concluding exhortation to the students to “sit in” at uptown lunch counters, ordered dispersal of the group which, not being directly forthcoming, was effected by tear gas. Cox was arrested the next day and was convicted of peace disturbance, obstructing public passages, and courthouse picketing. The Louisiana Supreme Court affirmed the convictions, two of which (peace disturbance and obstructing public passages) were involved in this case.

On January 18, 1965 in Cox v. Louisiana, the US Supreme Court ruled that held that a state government cannot employ “breach of the peace” statutes against protesters engaging in peaceable demonstrations that may potentially incite violence.

January 18, 1965: Black civil rights advocates met at Brown Chapel. Following speeches and prayers, King and John Lewis lead 300 marchers out of the church. Selma Police Chief Wilson Baker allowed them to march in small groups to the courthouse to register despite Hare’s (July 9, 1964) injunction, but Sheriff Jim Clark has them line up in an alley beside the courthouse, where they are out of sight, and left them there. None were registered. (see Jan 19)

January 18, 2019:  East Cleveland Law Director Willa Hemmons dropped misdemeanor charges against three of the five police supervisors accused of dereliction of duty for failing to control a high-speed chase that ended with Timothy Russell and Malissa Williams being killed in a 137-shot barrage of police gunfire.

Cleveland.com reported that Hemmons announced the dismissals but did not provide an explanation. She says she’s preparing to try the other two supervisors’ cases. (see 137 for extensive chronology) 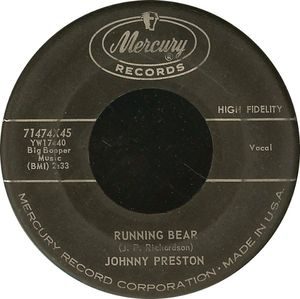 January 18 – February 7, 1960: “Running Bear” by Johnny Preston #1 Billboard Hot 100. Second of three #1 songs in a row in which a person or persons die. The song was written by J. P. Richardson (aka The Big Bopper) with background vocals by Richardson and George Jones, who do the Indian chanting of “UGO UGO” during the three verses, as well as the Indian war cries. (see Running Bear for more)

January 18, 2017: Paul McCartney filed a federal lawsuit against the music publisher Sony/ATV over ownership of some of the Beatles’ most famous songs.

McCartney’s suit was over what is known as copyright termination: the right of authors — or any creators — to reclaim ownership of their works from publishers after a specific length of time has passed. It was part of the 1976 copyright act and in recent years had become a potent force in the music industry as performers and songwriters used the law to regain control of their work.

In McCartney’s suit, filed in United States District Court in Manhattan, lawyers for the singer detailed the steps they have taken over the last nine years to reclaim Mr. McCartney’s piece of the copyrights in dozens of Beatles songs he wrote with John Lennon, including “Love Me Do,” “I Want to Hold Your Hand” and “All You Need Is Love.” That process involved filing numerous legal notices, which, the suit said, should be enough to guarantee that Sony/ATV would return the rights to Mr. McCartney, starting in October 2018. (see March 20, 2018) 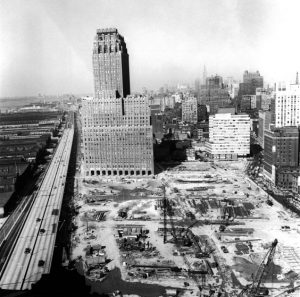 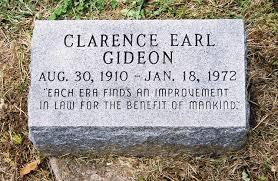 January 18, 1972: after his acquittal, Gideon resumed his previous way of life and married again some time later. He died of cancer in Fort Lauderdale, Florida at age 61. Gideon’s family in Missouri accepted his body and buried him in an unmarked grave. The local chapter of the American Civil Liberties Union later added a granite headstone, inscribed with a quote from a letter Gideon wrote to his attorney, Abe Fortas.  (see Gideon for expanded chronology)

January 18, 1994: prosecutor Lawrence Walsh released his final report in which he said former President Reagan had acquiesced in a cover-up of the scandal. Reagan called the accusation “baseless.”

January 18, 1998: President Clinton met with Betty Currie, Clinton’s personal secretary, and compared his memory with hers on Lewinsky. (see Clinton for expanded story)

January 18, 2002:  defrocked Boston priest John Geoghan, 66, was convicted of indecent assault and battery as a priest sex scandal in the archdiocese widens. Geoghan, 66, has been accused of abusing 130 children while he was actively serving as a priest in the Archdiocese of Boston over a 30-year period. He faces more criminal and civil suits.

On February 21, 2002 Geoghan was sentenced to 9-10 years in prison as the archdiocese continues to reel from the scandal. The extent of the cover-up and the sheer number of priests involved has shocked Boston’s large Catholic community, leading to calls for Cardinal Bernard Law to step down. Meanwhile, new cases are being reported in several other states. (see Apr 8)

Francis told reporters there was not a shred of evidence against Madrid, who victims of Karadima, Chile’s most notorious priest, had accused of being complicit in his crimes.

“The day someone brings me proof against Bishop Barros, then I will talk,”  (see Jan 21)

January 18, 2016: the University of Cincinnati agreed to pay $4.85 million to the family of Samuel DuBose, the unarmed black man who was shot to death on July 19, 2015  by Ray Tensing, one of its police officers. The settlement that also required the college to provide an undergraduate education to his 12 children, create a memorial to him on campus, and include his family in discussions on police reform. B & S, see March 14, 2017; DuBose, see Nov 12)

January 18, 2018: India tested a long-range ballistic missile capable of carrying nuclear weapons, paving the way for membership to a small list of countries with access to intercontinental missiles and putting most of China in its reach.

The ballistic missile, called Agni 5, was launched from Abdul Kalam Island, off Odisha State in eastern India, traveling for around 19 minutes and 3,000 miles. In a statement, the Indian Ministry of Defense said that all objectives of the mission had been “successfully met.” (see Jan 30)

January 18, 2018: Helen Grace James had entered the Air Force in 1952 as a radio operator  In 1955, the Air Force investigated her after she was suspected of being gay. She was arrested and discharged as “undesirable,” with no severance pay, insurance or other benefits.

On January 3, 2018, James had sued the Air Force to have her discharge upgraded. She had said an “honorable” discharge would “make me feel like I’ve done all I can to prove I am a good person, and that I deserve to be a whole civilian in this country I love.”

On this date, FedEx delivered a notification of her status upgrade to “honorable.”

The 90-year-old James said she was “still trying to process it. It was both joy and shock. It was really true.”  (see Feb 12)

January 18, 2018:   President Trump tweeted: “The Wall is the Wall, it has never changed or evolved from the first day I conceived of it,”  in response to a Washington Post report that White House Chief of Staff John Kelly said “a concrete wall from sea to shining sea” was not going to happen and that Trump’s campaign promises about the wall were “uninformed.”  (next IH, see Jan 22; next TW, see Mar 13)

January 18, 2020: President Trump’s legal defense team strenuously denied that he had committed impeachable acts, denouncing the charges against him as a “brazen and unlawful” attempt to cost him re-election as House Democrats laid out in meticulous detail their case that he should be removed from office. [NYT story] (next TI, see Jan 20 or see Trump for expanded chronology)

Dillingham’s announcement came six days after the Trump administration backed off from its final attempt to exclude undocumented immigrants from an important count of the nation’s population.

The departure saved him from the possibility of being fired by the incoming Biden administration, which had indicated it will not follow the Trump administration’s plan to exclude non-citizens when splitting seats in Congress between the states. [CNN article] (next Census, see Jan 20)