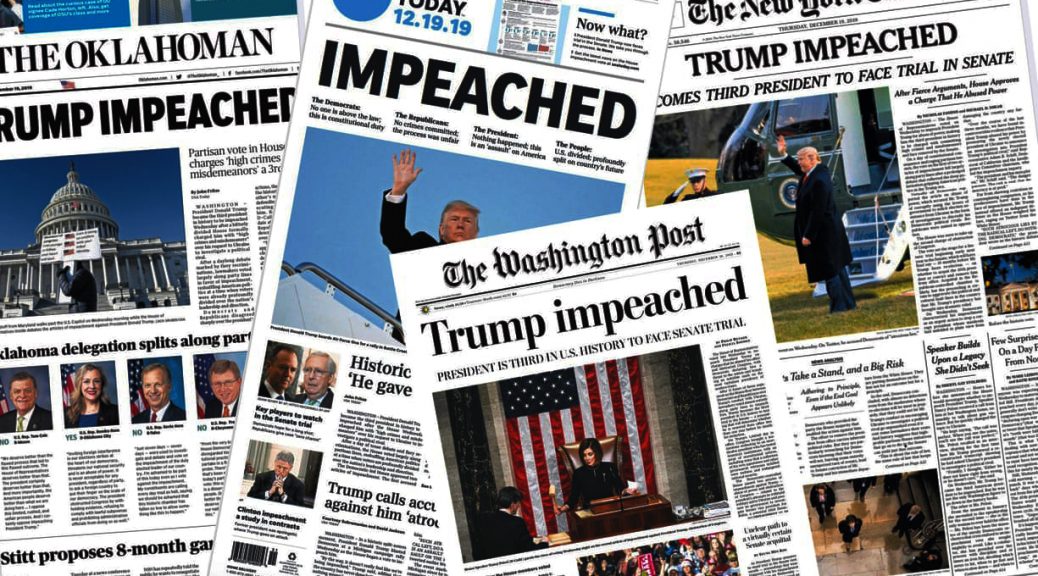 The preliminary and public inquires by the House of Representatives had ended.  After nearly a month of strategizing, the House voted to send the articles of impeachment to the Senate.

And so the trial would begin.

January 15, 2020: Speaker Nancy Pelosi named Representatives Adam B. Schiff of California, the chairman of the Intelligence Committee, and Jerrold Nadler of New York, the chairman of the Judiciary Committee, Representatives Zoe Lofgren of California, Hakeem Jeffries of New York, Val B. Demings of Florida, Jason Crow of Colorado and Sylvia R. Garcia of Texas to serve as managers of the impeachment case against President Trump. [NYT story]

Later that same day,  the House voted to send articles of impeachment against President Donald Trump to the Senate for a trial. The House voted 228 to 193 largely along party lines to send the Senate the two articles accusing Trump of abuse of power and obstruction of Congress. [CNN story]

January 18, 2020: President Trump’s legal defense team strenuously denied that he had committed impeachable acts, denouncing the charges against him as a “brazen and unlawful” attempt to cost him re-election as House Democrats laid out in meticulous detail their case that he should be removed from office. [NYT story]

In a 110-page brief submitted to the Senate, the president’s lawyers advanced their first sustained legal argument since the House opened its inquiry in the fall, contending that the two charges approved largely along party lines were constitutionally flawed and set a dangerous precedent. [NYT story]

In a series of party-line votes punctuating 12 hours of debate, Senate Republicans turned back every attempt by Democrats to subpoena documents from the White House, State Department and other agencies, as well as testimony from White House officials that could shed light on the core charges against Mr. Trump. [NYT article]

January 22, 2020: the House Democratic impeachment managers began formal arguments in the Senate trial, presenting a meticulous and scathing case for convicting President Trump and removing him from office on charges of abuse of power and obstruction of Congress.

Representative Adam B. Schiff of California, the lead House prosecutor, took the lectern in the chamber as senators sat silently preparing to weigh Mr. Trump’s fate. Speaking in an even, measured manner, he accused the president of a corrupt scheme to pressure Ukraine for help “to cheat” in the 2020 presidential election.

Invoking the nation’s founders and their fears that a self-interested leader might subvert democracy for his own personal gain, Mr. Schiff argued that the president’s conduct was precisely what the framers of the Constitution had in mind when they devised the remedy of impeachment, one he said was “as powerful as the evil it was meant to combat.” [source: NYT article]

January 23, 2020: House Democrats sought to pre-emptively dismantle President Trump’s core defenses in his impeachment trial, invoking his own words to argue that his pressure campaign on Ukraine was an abuse of power that warranted his removal.

On the second day of arguments Democrats sought to make the case that Trump’s actions were an affront to the Constitution. And they worked to disprove his lawyers’ claims that he was acting only in the nation’s interests when he sought to enlist Ukraine to investigate political rivals. [source: NYT article]

Schiff also appealed to the consciences of Republican senators weighing whether to hear from witnesses and seek more documents that Trump had suppressed.

January 25, 2020: the NYT reported that President Trump’s lawyers wrapped up a brief opening argument against his impeachment much as they had begun, seeking to turn accusations of wrongdoing back on Democrats and insisting that there were innocent explanations for Trump’s actions toward Ukraine.

“They’ve come here today and they’ve basically said, ‘Let’s cancel an election over a meeting with the Ukraine,’” said Pat A. Cipollone, the White House counsel. “It would be a completely irresponsible abuse of power to do what they’re asking you to do: to stop an election, to interfere in an election and to remove the president of the United States from the ballot.”

January 27, 2020: on the second day of President Trump’s lawyers presenting arguments against his impeachment, they told senators that no evidence existed tying the president’s decision to withhold security aid from Ukraine to his insistence on the investigations. They say the investigations were requested out of a concern for corruption in Ukraine.

Yet a new account by the President’s former national security adviser John R. Bolton weakened that defense when he wrote for a forthcoming book that Trump had conditioned military aid for Ukraine on that country’s willingness to furnish information on his political rivals. [NYT article]

January 28, 2020: the NYT reported that President Trump’s defense team appealed to the Senate to disregard a new account by the former national security adviser John R. Bolton that had bolstered the impeachment case against the president. But by day’s end, Republican leaders working feverishly to block testimony from Mr. Bolton or other witnesses indicated they had not yet corralled the votes to do so.

On the final day of arguments on Mr. Trump’s behalf, Jay Sekulow, one of the president’s private lawyers, sought to raise doubts about Mr. Bolton’s claim in an unpublished manuscript that Mr. Trump tied the release of military aid to Ukraine to investigations into his political rivals, calling it an “unsourced allegation” that was “inadmissible” in his impeachment trial.

As the Senate opened a two-day, 16-hour period of questioning from senators, Mr. Trump laced into Mr. Bolton, his former national security adviser, whose unpublished manuscript contains an account that contradicts his impeachment defense. The president described Mr. Bolton on Twitter as a warmonger who had “begged” for his job, was fired, and then wrote “a nasty & untrue book.”

January 30, 2020:  the NYT reported that Senator Lamar Alexander, Republican of Tennessee, said that although he believed that Democrats had proved their case that President Trump acted “inappropriately” in his dealings with Ukraine, he did not think the president’s actions were impeachable and would vote against considering new evidence in the impeachment trial.

Alexander’s statement was a strong indication that Republicans had lined up the votes to block a call for more witnesses and documents and press toward a quick acquittal. His opposition was a significant victory for the White House and Republican leaders.

“The question then is not whether the president did it, but whether the United States Senate or the American people should decide what to do about what he did,” Alexander said.

The Democrats’ push for more witnesses and documents failed 49 to 51, with only two Republicans, Mitt Romney of Utah and Susan Collins of Maine, joining Democrats in favor. The vote on the verdict was planned for February 5.

Republican Sen. Lisa Murkowski said that while she would not vote to convict Trump, his actions were “shameful and wrong.”  [CNN article]

February 5, 2020: the NYT reported that, after five months of hearings, investigations and cascading revelations about President Trump’s dealings with Ukraine, a divided United States Senate acquitted him on Wednesday of charges that he abused his power and obstructed Congress to aid his own re-election, bringing an acrimonious impeachment trial to its expected end.

Only one Republican, Senator Mitt Romney of Utah, broke with his party to judge Mr. Trump guilty of abuse of power.