Steady leadership at any time is important, but especially during a crisis. In early 2020, the world slowly came to the realization that there was a new very serious coronavirus health threat, what would become known as COVID 19.

Countries were not prepared and struggled to deal with the outbreak. We all learned the phrase “flatten the curve” in reference to slowing down the pandemic’s contagious spread.

Here is a timeline of Trump and COVID 19. See my first of several COVID 19 pandemic posts for a much expanded timeline.

It was in December 2019 that the as yet unnamed deadly virus’s impact was first observed.

January 24:In a tweet, Trump praised China for its efforts to prevent the spread of the virus. “China has been working very hard to contain the Coronavirus. The United States greatly appreciates their efforts and transparency. It will all work out well. In particular, on behalf of the American People, I want to thank President Xi!” [NPR timeline]

January 29, 2020: on April 7, 2020, the NY Times reported that top White House adviser Peter Navarro had warned in a memo to Trump administration officials that the coronavirus crisis could cost the United States trillions of dollars and put millions of Americans at risk of illness or death.

“The lack of immune protection or an existing cure or vaccine would leave Americans defenseless in the case of a full-blown coronavirus outbreak on U.S. soil,” Navarro’s memo said. “This lack of protection elevates the risk of the coronavirus evolving into a full-blown pandemic, imperiling the lives of millions of Americans.”

The memo came during a period when Mr. Trump was playing down the risks to the United States. He later went on to say that no one could have predicted such a devastating outcome.

In one worst-case scenario cited in the memo, more than a half-million Americans could die.

And at a campaign rally in Iowa, Trump talked about the U.S. partnership with China to control the disease. “We only have five people. Hopefully, everything’s going to be great. They have somewhat of a problem, but hopefully, it’s all going to be great. But we’re working with China, just so you know, and other countries very, very closely. So it doesn’t get out of hand.” [NPR timeline]

February 2: Trump told Fox News host Sean Hannity, “We pretty much shut it down coming in from China.”

February 10: at a campaign rally in Manchester, N.H., Trump said: “Looks like by April, you know, in theory, when it gets a little warmer, it miraculously goes away. I hope that’s true. But we’re doing great in our country. China, I spoke with President Xi, and they’re working very, very hard. And I think it’s going to all work out fine.” [NPR timeline]

February 13: in an interview with Geraldo Rivera, Trump characterized the threat of the virus in the U.S. by saying: “In our country, we only have, basically, 12 cases, and most of those people are recovering and some cases fully recovered. So it’s actually less.” [NPR timeline]

February 14: China reports that 1,716 health workers have contracted COVID-19 and that six of them have died.

“We have a very small number of people in the country, right now, with it. It’s like around 12. Many of them are getting better. Some are fully recovered already. So we’re in very good shape.”

Centers for Disease Control Director Robert Redfield had estimated that the “virus is probably with us beyond this season and beyond this year.” Despite that view, President Trump continued to push the idea that it would be gone in a matter of weeks.

“There’s a theory that, in April, when it gets warm, historically, that has been able to kill the virus,” he said . “So we don’t know yet. We’re not sure yet. But that’s around the corner.”

February 23: Speaking to reporters on the White House lawn, President Trump stated that  “We have it very much under control in this country.”

The same day, Trump asked for $1.25 billion in emergency aid. It grows to $8.3 billion in Congress.

He tweeted that the virus “is very much under control” and the stock market “starting to look very good to me!”

February 26: In a news conference that day, Trump said the United States was “really prepared.”

He also said, ““When you have 15 people, and the 15 within a couple of days is going to be down to close to zero, that’s a pretty good job we’ve done.”

Trump also criticized the media and accused them of creating the crisis and that all was fine. [NPR timeline] 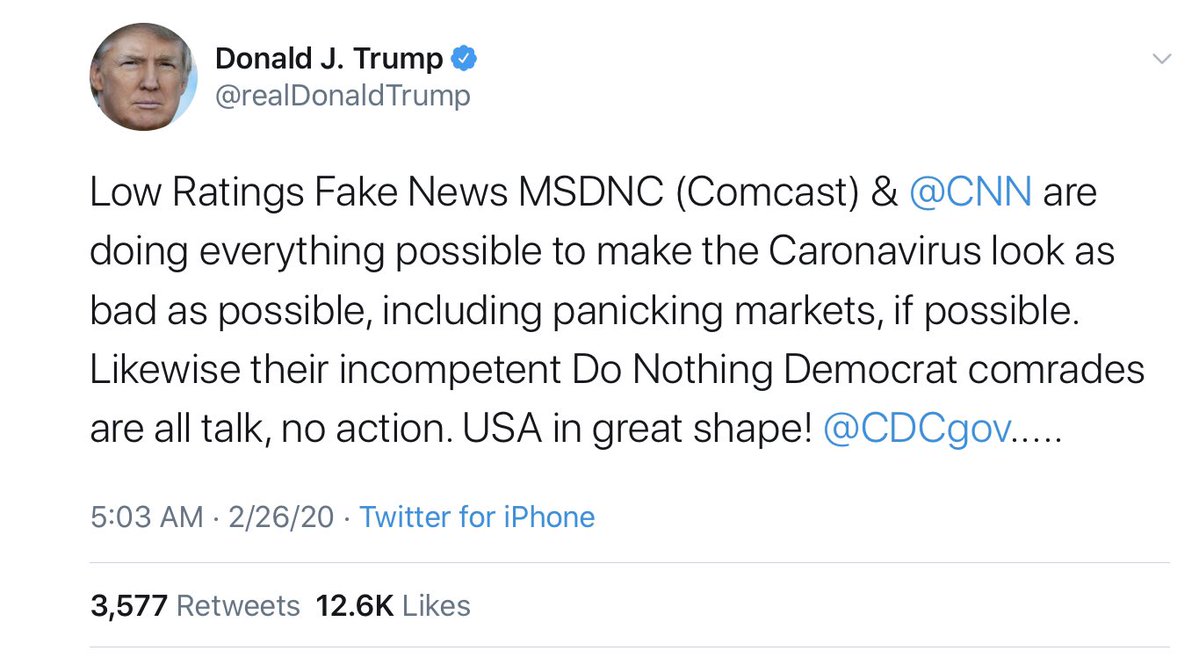 He added during a brief press conference: “We’re going to be pretty soon at only five people,” he said. “And we could be at just one or two people over the next short period of time. So we’ve had very good luck.”

“I think every aspect of our society should be prepared,” he added later. “I don’t think it’s going to come to that, especially with the fact that we’re going down, not up. We’re going very substantially down, not up.”

February 27: the number of infections globally continued to grow. There were 3,474 cases of COVID-19 — including 54 deaths — outside of China in 44 countries.

President Trump stated, “It’s going to disappear. One day — it’s like a miracle — it will disappear.”

February 29: a patient near Seattle became the first coronavirus patient to die in the United States.

While speaking at the Conservative Political Action Conference, Trump again claimed his administration had the coronavirus under control.

It would be revealed later that a CPAC attendee tested positive for COVID-19, leading multiple Republican lawmakers who came into contact with him to self-quarantine.