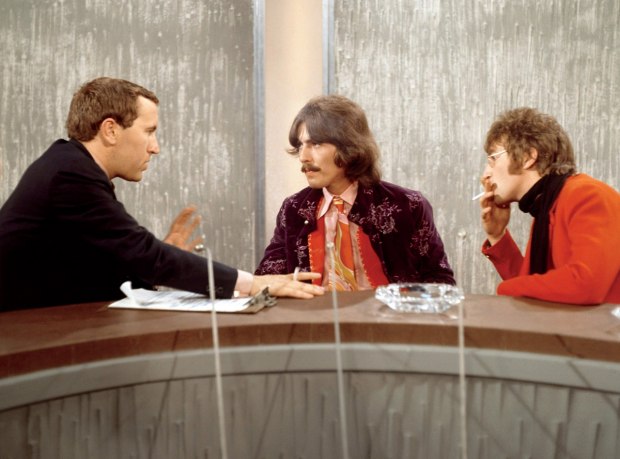 Committee on Urban Conditions Among Negroes 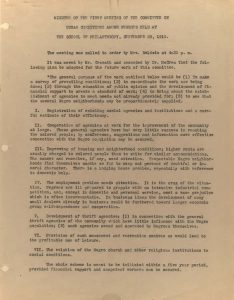 September 29, 1915: the Jim Crow racial segregation laws enacted and enforced in the American South in the late 19th and early 20th centuries enforced the strict boundaries of a legalized racial caste system and worked to restore and maintain white supremacy in the region. Even after the Civil War and Reconstruction amendments had ended slavery and declared black people to be citizens with civil rights and the power to vote, many Southern state and local lawmakers passed laws forbidding blacks and whites from playing checkers or pool together, entering a circus through the same entrance, or being buried in the same cemetery.

In some instances, these laws interfered with the provision of very important services, including education and health care. On September 29, 1915, the Alabama legislature passed a law forbidding any “white female nurse” from treating a black male patient in any public or private medical facility. Punishment for violation of the law included a fine of $10-$200 and up to six months incarceration or hard labor. An outgrowth of the long-held Southern fear that white women were at risk of attack and assault whenever in the presence of black men, similar action was taken in Georgia in 1911. (see Dec 4)

September 29, 1956: in an attempt to restrict the activities of the NAACP, Virginia passed a set of laws against barratry, champertry, and maintenance. Barratry is defined as “stirring up” litigation by encouraging people to sue when they might not have done so on their own.

The laws were a blatant attempt to prevent the NAACP from pursuing civil rights cases in the state.

In late September/early October 1970: after the trial, a jury found Cleveland Sellers guilty  of participating in a riot two nights before the Orangeburg shootings. 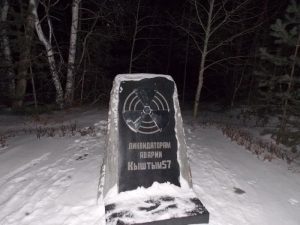 September 29, 1957: The Mayak or Kyshtym nuclear complex (Soviet Union). A fault in the cooling system at the nuclear complex, near Chelyabinsk, results in a chemical explosion and the release of an estimated 70 to 80 tonnes of radioactive materials into the air. Thousands of people are exposed to radiation and thousands more are evacuated from their homes. It is categorized as Level 6 on the seven-point International Nuclear Events Scale (INES). [2017 Stanford U article] (see Oct 7)

September 29, 1961: Robert Shelton of the New York Times reviewed Dylan’s Gerde’s performance. With the headline, Bob Dylan: A Distinctive Folk-Song Stylist, Shelton wrote, “A bright new face in folk music is appearing at Gerde’s Folk City. Although only 20 years old, Bob Dylan is one of the most distinctive stylists to play in a Manhattan cabaret in months.” (see Oct 25)

September 29, 1967: John Lennon and George Harrison took part in an interview with David Frost for The Frost Programme. It was recorded before a studio audience between 6pm and 7pm at Studio One at Wembley Studios in London. Among their comments:

Harrison: “I believe in reincarnation. Life and death are still only relative to thought. I believe in rebirth. You keep coming back until you have got it straight. The ultimate thing is to manifest divinity, and become one with The Creator.” (see Oct 17)

The song’s lyrics typified the view that many Americans felt toward the changes that had occurred during the decade.

September 29 1966 — October 28 1966:  the US military began Project Popeye in a strip of the Laos panhandle east of the Bolovens Plateau in the Se Kong River valley. Naval personnel eventually conducted 50 seeding cloud experiments. Project leaders claimed that 82% of the clouds produced rain within a brief period after having been seeded and that one of the clouds drifted across the Vietnam border and dropped nine inches of rain on a US Special Forces camp over a four hour period. (next V, see “In October” ; see OP for expanded story)

September 29, 1967: LBJ spoke about American commitment to US involvement in Vietnam  (see Oct 9)

September 29, 1970:  Vice President Agnew charged that the Presidential Commission on Campus Unrest had indulged in “‘scapegoating’ of the most irresponsible sort” in saying that only the President could offer the moral leadership needed to reunite the country. (NYT article) (see Oct 12; FS, see June 7, 1971)

September 29, 1969: Alcatraz Takeover: the San Francisco Board of Supervisors approved a plan by Lama Hunt to turn the Federal prison site of Alcatraz Island into a monument to the US space program. (see Oct 9)

September 29, 2005: in an MSNBC interview, Kevorkian said that if he were granted parole, he would not resume directly helping people die and would restrict himself to campaigning to have the law changed. (see JK for expanded story)

September 29, 2011: the Log Cabin Republicans is an organization of lesbian and gay Republicans, working within the Republican Party to advocate for lesbian and gay rights. It operates in the face of hostility from the vast majority of GOP leaders who have been beholden to the Religious Right in opposition to lesbian and gay rights. In Log Cabin Republicans v. United States, the organization challenged the constitutionality of the Pentagon’s Don’t Ask, Don’t Tell policy, under which the military would not ask about sexual orientation, and homosexuals would be allowed to serve in the military as long as they did not mention their sexual orientation. In early September 2010 a U.S. District Court declared the DADT policy an unconstitutional violation of the First and Fifth Amendments, but on this day, the Ninth Circuit Court of Appeals vacated the decision on the grounds that the legislative repealed of DADT, in December 2010, rendered the case moot. As a consequence, the District Court decision had no value as legal precedent.

President Barack Obama signed the DADT repeal act into law on the 22nd of December 2010, and the repeal took effect on September 20, 2011. (see Dec 6)

September 29, 2021: US federal wildlife officials announced that 22 animals and one plant should be declared extinct and removed from the endangered species list.

The announcement also offered a glimpse of the possible future. It came amid a worsening global biodiversity crisis that threatened a million species with extinction, many within decades. Human activities like farming, logging, mining and damming were taking habitat from animals and pollute much of what’s left. People poached and overfished. Climate change added new peril.

“Each of these 23 species represents a permanent loss to our nation’s natural heritage and to global biodiversity,” said Bridget Fahey, who oversaw species classification for the Fish and Wildlife Service. “And it’s a sobering reminder that extinction is a consequence of human-caused environmental change.” [NYT article] (next EI, see Oct 2)