February – March 1917: Russian Revolution. Strikes, bread riots, and mass protests against the government break out in Petrograd. Troops sent to subdue the crowd join in the protests. (see June 15, 1917)

In February 1934: Goldman visited relatives in Rochester, NY before arriving in NYC on February 2, where she was mobbed by reporters and photographers at Pennsylvania Station and the Hotel Astor. (see EG for expanded Goldman chronology) 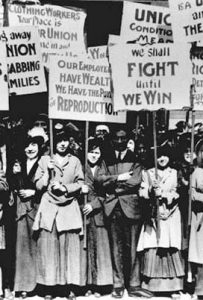 In February 1910: the New York Shirtwaist Strike ended. The settlement  improved workers’ wages, working conditions, and hours, but did not provide union recognition. A number of companies, including the Triangle Shirtwaist Factory, refused to sign the agreement. But even so, the strike won a number of important gains. It encouraged workers in the industry to take action to improve their conditions, brought public attention to the sweatshop conditions. (next Feminism, see December 1910)

In February 1995: the General Executive Boards of the International Ladies Garment Workers Union and the Amalgamated Clothing Workers of America voted unanimously to merge.  The new union, named the Union of Needletrades, Industrial and Textile Employees (UNITE), was led by former ILGWU President Jay Mazur. In 1995, UNITE had a membership of about 250,000 in the United States, Canada, and Puerto Rico. (Revolvy article) (next Feminism  June 26, 1996)

In February 1987: with the support of Morris Dees and Joseph J. Levin at the Southern Poverty Law Centre (SPLC), Beulah Mae Donald, the mother of slain Michael Donald sued the United Klans of America. An all-white jury found the Klan responsible for the lynching of Michael Donald and ordered it to pay 7 million dollars. This resulted the Klan having to hand over all its assets including its national headquarters in Tuscaloosa. (BH, see February 10, 1989; next Lynching & Donald, see June 6, 1997; for expanded chronology of lynching, see also AL4)

In February 2006; the FBI launched its review of unsolved civil rights-era murders, many of which were believed committed by Klansmen. (BH, see May 21, 2006; Cold Cases, see October 7, 2008)

In February 1963: Columbia staff photographer Don Hunstein photographed Dylan and Suze Rotolo, together again after seven months’ separation, for the cover of The Freewheelin’ Bob Dylan.

Hunstein recalled: “We went down to Dylan’s place on Fourth Street, just off Sixth Avenue, right in the heart of the Village. It was winter, dirty snow on the ground . . . Well, I can’t tell you why I did it, but I said, Just walk up and down the street. There wasn’t very much thought to it. It was late afternoon you can tell that the sun was low behind them. It must have been pretty uncomfortable, out there in the slush.” (see Apr 12; photo, see May 27)

February – December 1967: during this span, Dylan composed more than thirty songs, which he and The Hawks (still minus Levon Helm) recorded as well as numerous cover songs on a two-track reel-to-reel system that Garth Hudson had set up. Most songs were recorded at the rented house that Rick Danko, Garth Hudson, and Richard Manuel had rented, Big Pink. (see see May 17)

In February 1966: newspapers begin reporting that Ken Kesey was not dead but in Mexico. (see Feb 5) 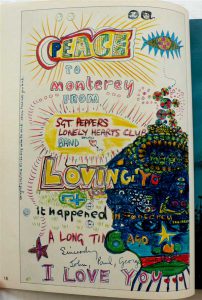 In February 1967, organizers asked the Beatles to contribute a drawing to the upcoming Monterey International Pop Festival The Beatles’ publicist Derek Taylor. Paul McCartney was on the Board of Governors for the Festival and he insisted that the relatively unknown Jimi Hendrix appear at the show.

The Beatles were busy working on their landmark album, Sgt. Pepper, at the time, so the drawing is “from Sgt. Peppers Lonely Hearts Club Band.” The message on the drawing continues: “Loving You, it happened in Monterey a long time ago.”

In February, 1969: in spite of government restrictions, President Nixon authorized the covert Operation Menu, bombing of North Vietnamese and Vietcong bases within Cambodia. Over the following four years, U.S. forces will drop more than a half million tons of bombs on Cambodia. (Third World Traveler article) (see Feb 13) 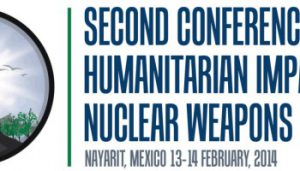 In February 2014:  146 States and more than a hundred civil society campaigners attended the Nayarit Conference on the Humanitarian Impact of Nuclear Weapons. The International Campaign to Abolish Nuclear Weapons [ICAN] told participants “the claim by some states that they continue to need these weapons to deter their adversaries has been exposed by the evidence presented at this conference…as a reckless and unsanctionable gamble with our future.” At the conclusion of the conference, Mexico called for the start of a diplomatic process to negotiate a legally binding instrument prohibiting nuclear weapons. (Nuclear, see Feb 18; ICAN, see Oct 26)

February – August 2016: the International Campaign to Abolish Nuclear Weapons [ICAN] campaigned actively at UN Open-Ended Working Group [OEWG] in Geneva, which recommended by a large majority of 107 participating States that the General Assembly authorize negotiations on “a legally binding instrument to prohibit nuclear weapons, leading towards their total elimination.” ICAN called the OEWG recommendation “a breakthrough in the seven-decade-long global struggle to rid the world of the worst weapons of mass destruction.” (Nuclear &  ICAN, see Oct 27)