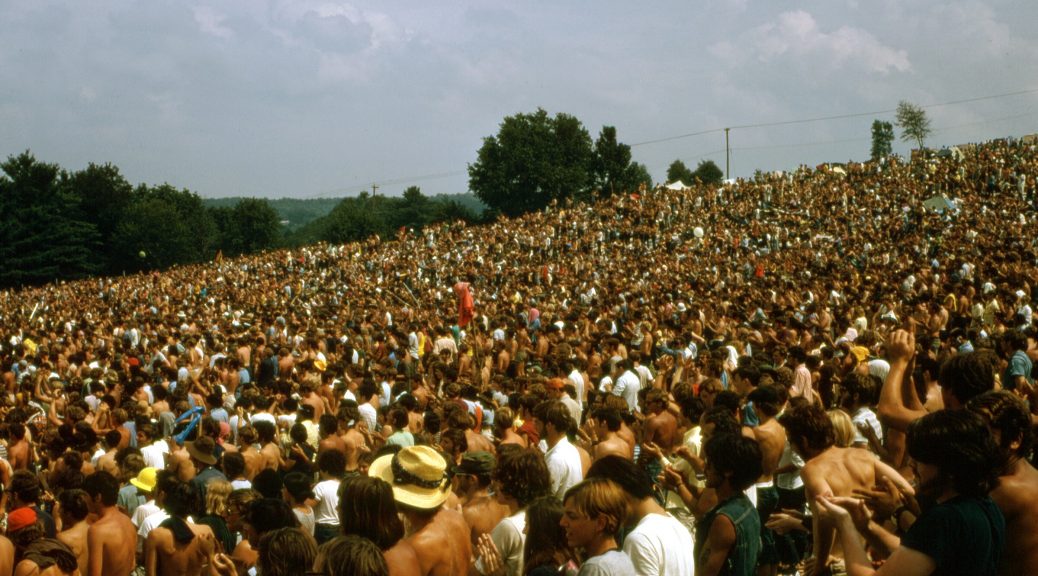 My Woodstock story is a straightforward one. High school friend Tony and I left NJ and got close to the site on Friday night, walked in on Saturday morning, and hitch-hiked back to the car on Sunday afternoon.

I had borrowed my girlfriend’s father’s 35mm camera and his binoculars. I bought one roll of Kodachrome slide film and loaded it into the camera.

As Tony and I walked toward Bethel and the site on Saturday morning I took a few pictures. On Saturday I took several more. Once during the night I took a picture. I finished the roll on Sunday before we left. A few times I experimented and put the binoculars up to the camera’s lens and improvised a telephoto lens.

Tony and I hardly moved the time we were there. We staked out our 8-foot square and only left a few times in an unsuccessful search for food and to use the porta-johns.

Here are those pictures. Click on the picture to “open” it up and see a larger size. 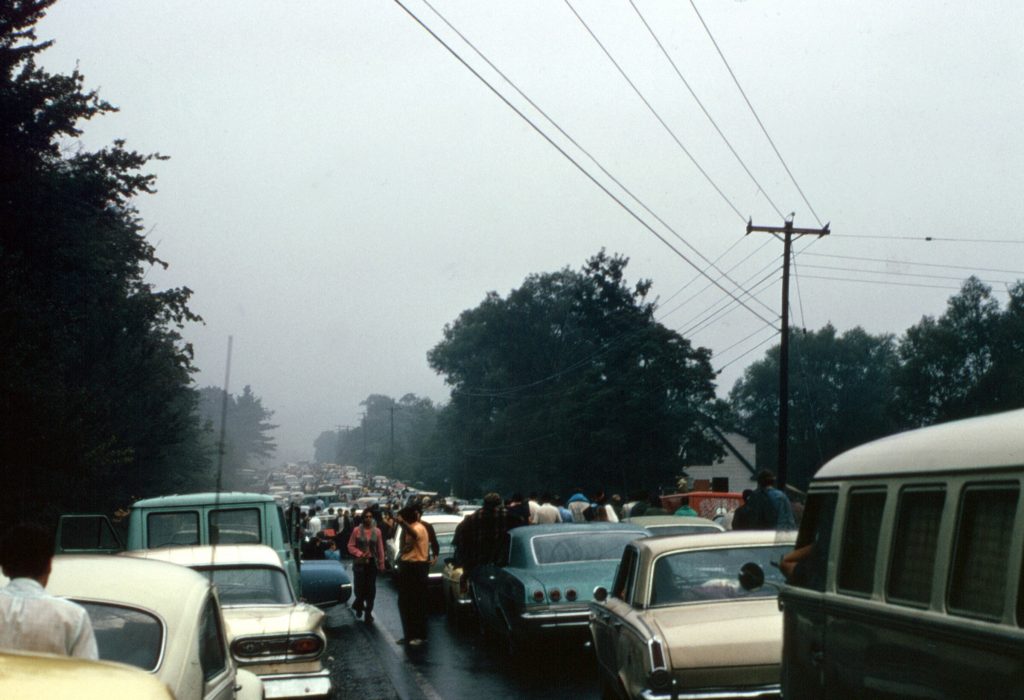 It was a foggy misty Sullivan County, NY morning. It is interesting today when I show these Rt 17B pictures to friends and guest at the Bethel Woods Center for the Arts Museum, what they see. Many love looking at the cars and tell me how they had that model or how their neighbor had one like it. 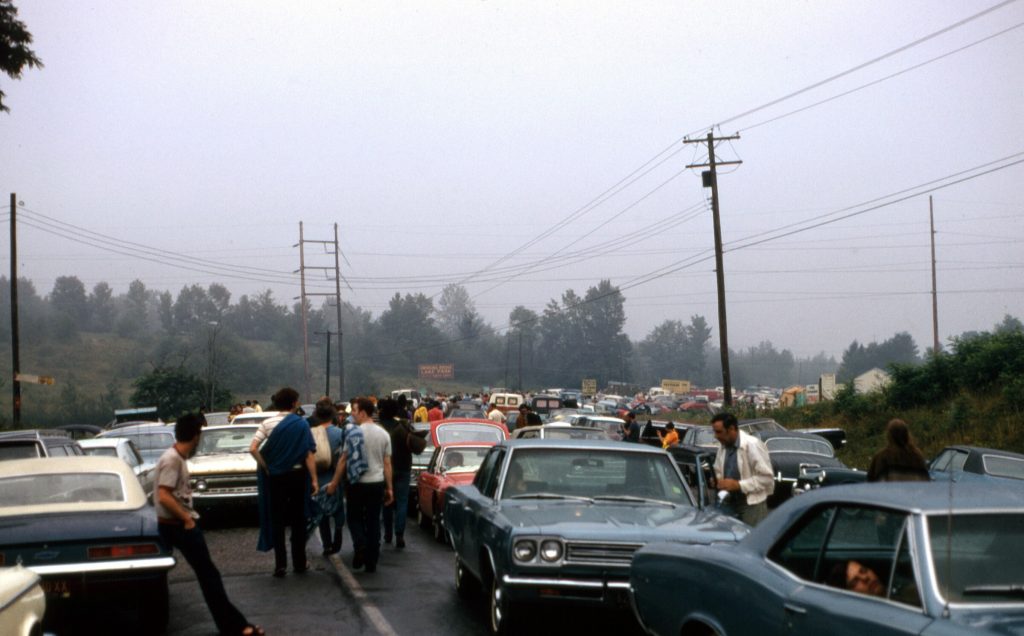 More parked cars. Traffic was literally at a standstill. The time was approximately 7 AM 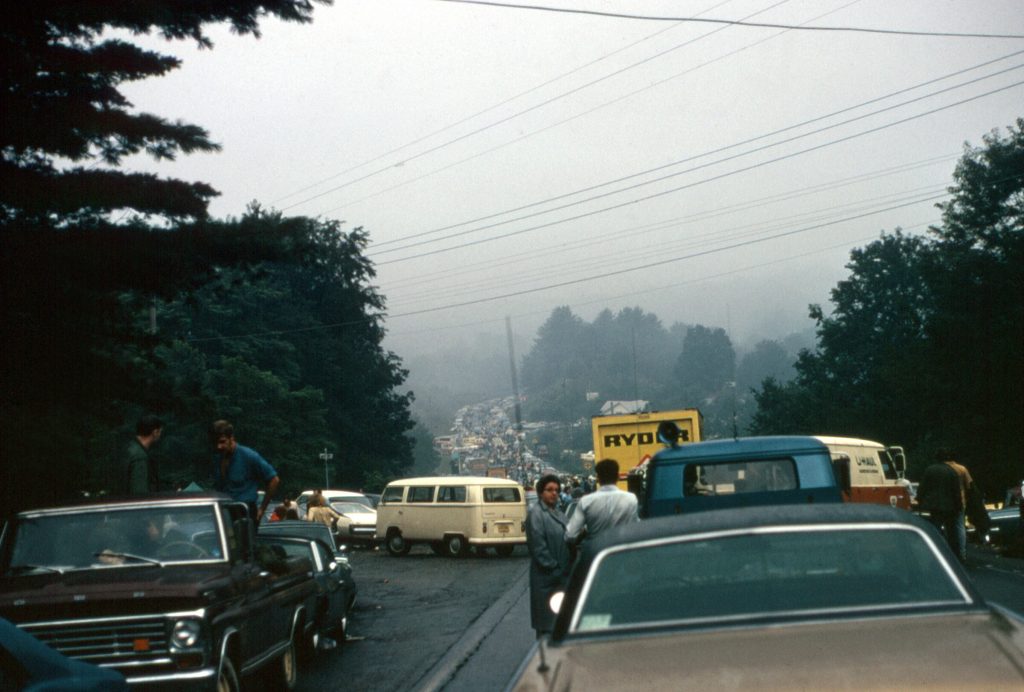 We would ask people, “How much farther?” and their answer always was, “Just up ahead.” 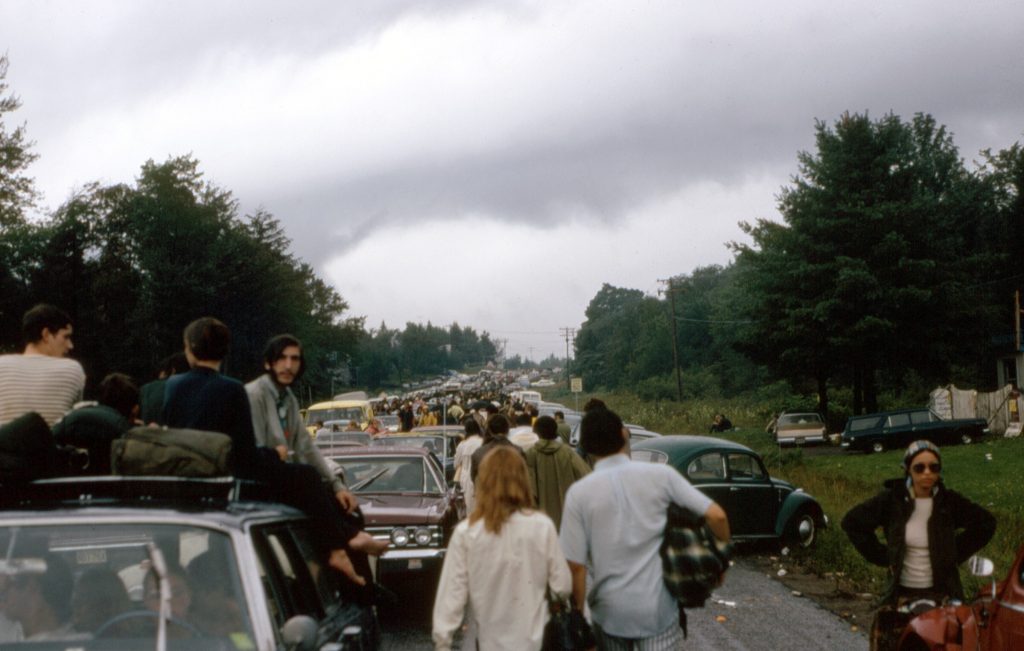 We do not have one picture of ourselves that weekend other than this picture which includes the back of Tony (blue shirt carrying a sleeping bag). We were getting closer, but we didn’t realize it. 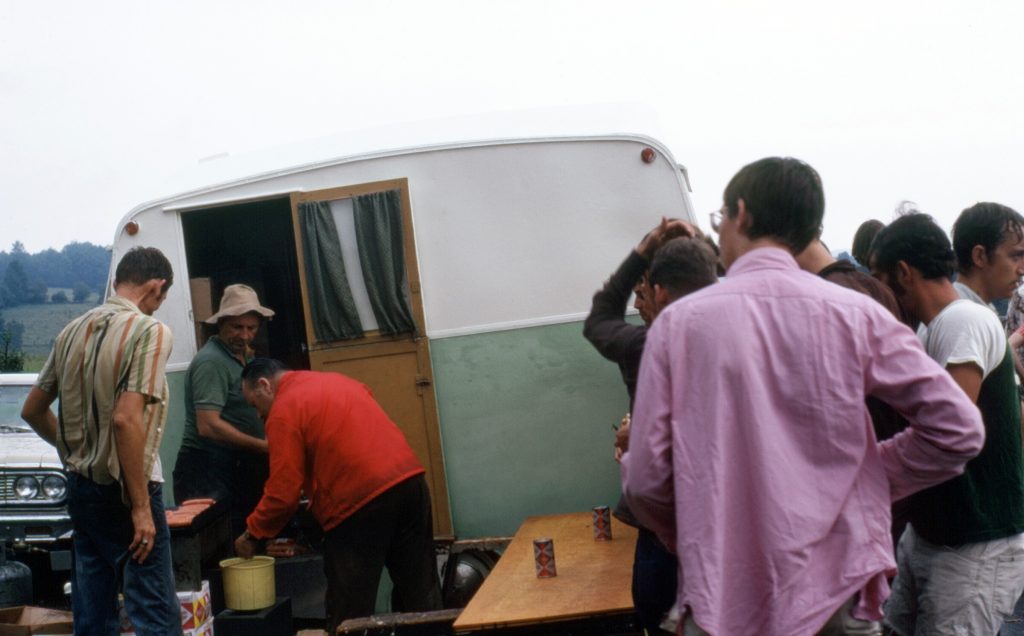 While most locals were unhappy with the traffic and idea of a rock festival, these enterprising people set up a hot dog and soda stand. $1 a dog; $1 a soda. We decided to wait than pay such a high price. 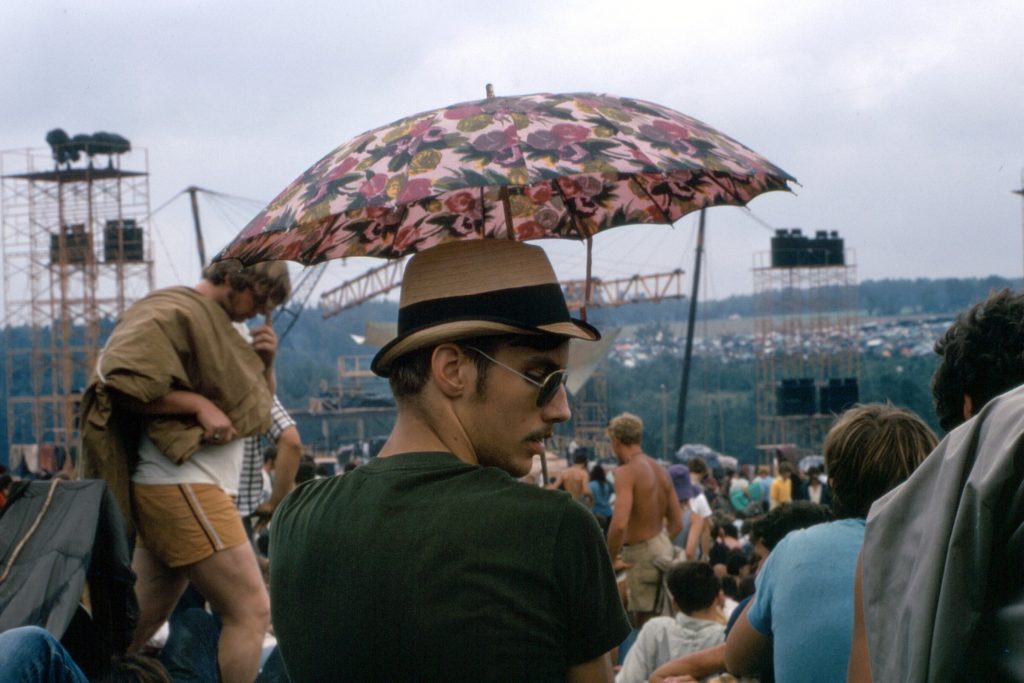 We found a spot a hundred yards + from the stage toward the left, spread out our sleeping bags, and sat down. This guy was in front of us. His hat and umbrella were unusual to me, so I took his picture. The umbrella was a parasol for the sunny afternoon. Saturday was a beautiful day. 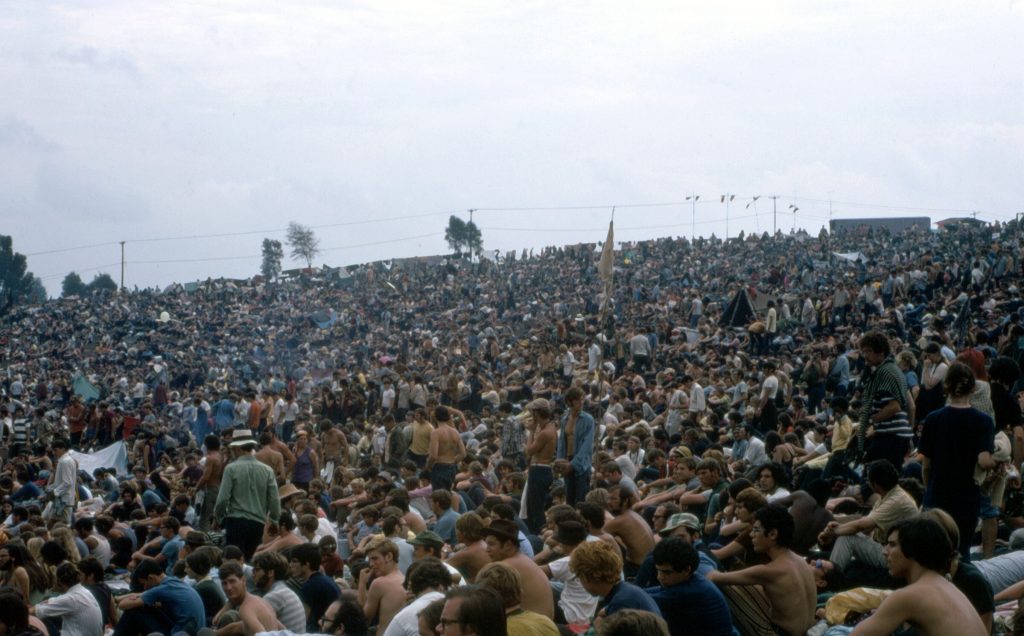 Most of my pictures, as you’ll see, were simply of the crowd. 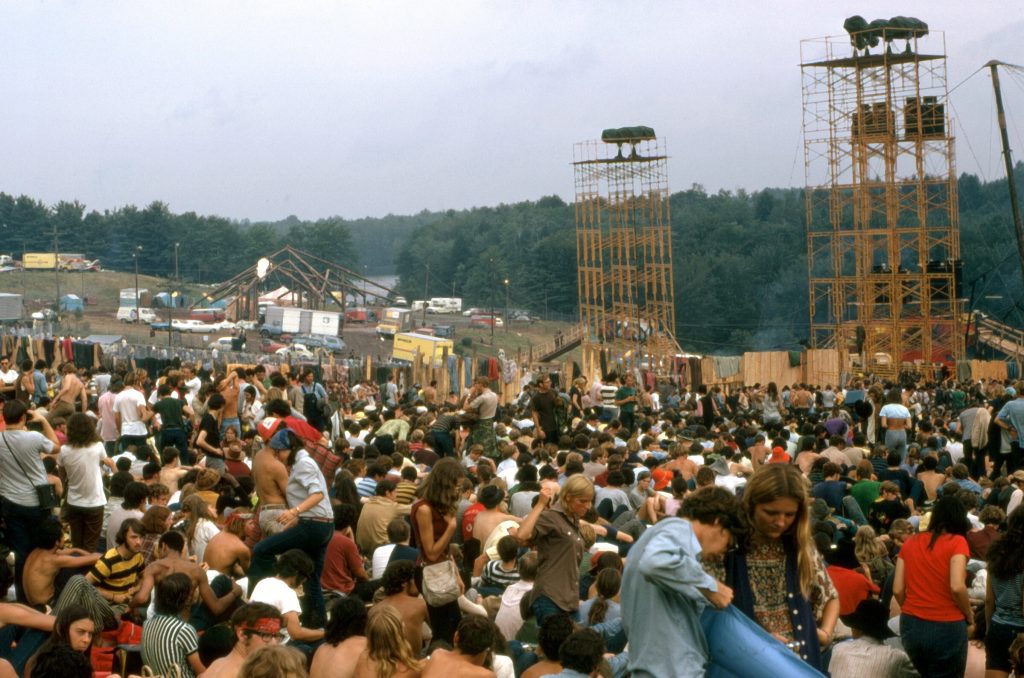 Two lighting towers and the still unfinished artists tent in the background. Enlarge this picture and count the number of rugby (wide-striped) shirts. Now see if you can find any tie-dyed shirts. 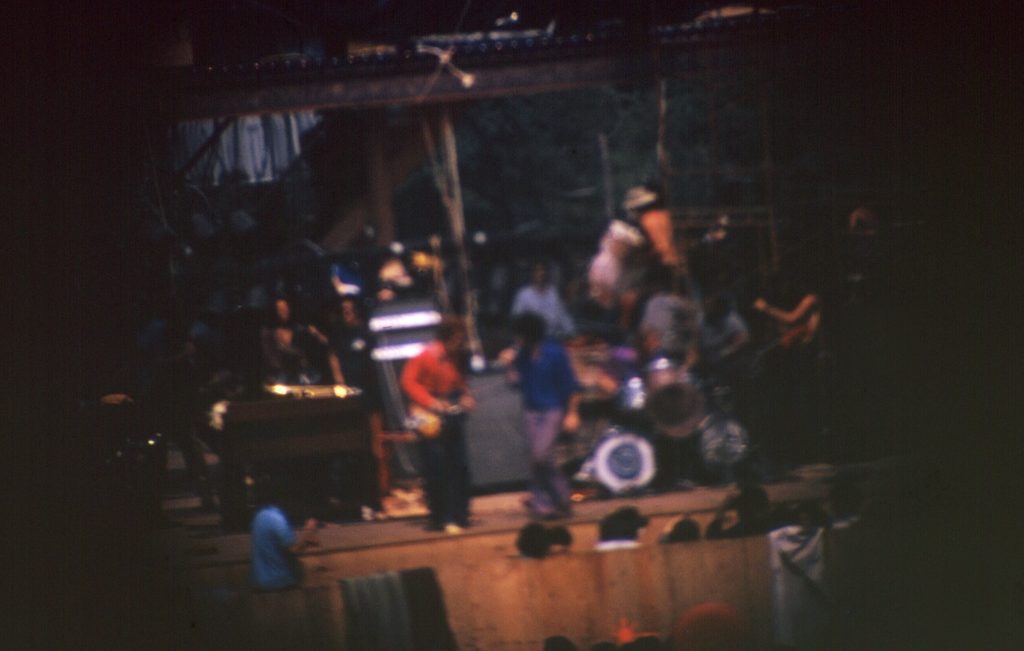 Quill. Saturday’s opening act. This is one of the shots through my binoculars. 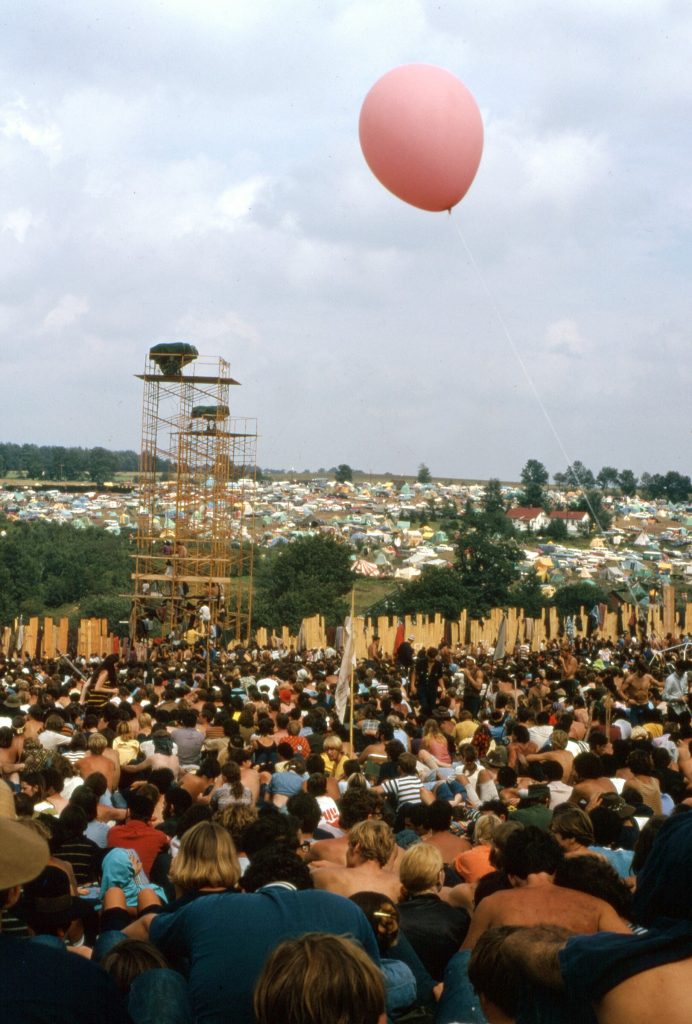 When you get tired of group shots, you take a picture of a balloon. In the distance you can see one of the large tent areas that another farmers rented space for. 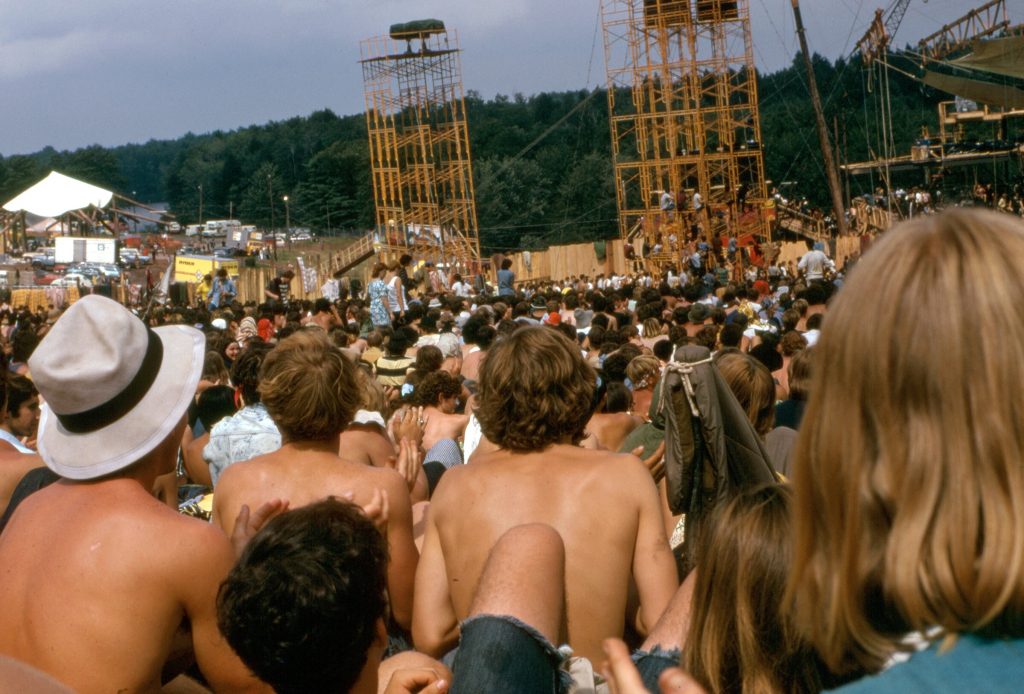 I often ask people to “look for the hippies” in these pictures. You won’t see many. 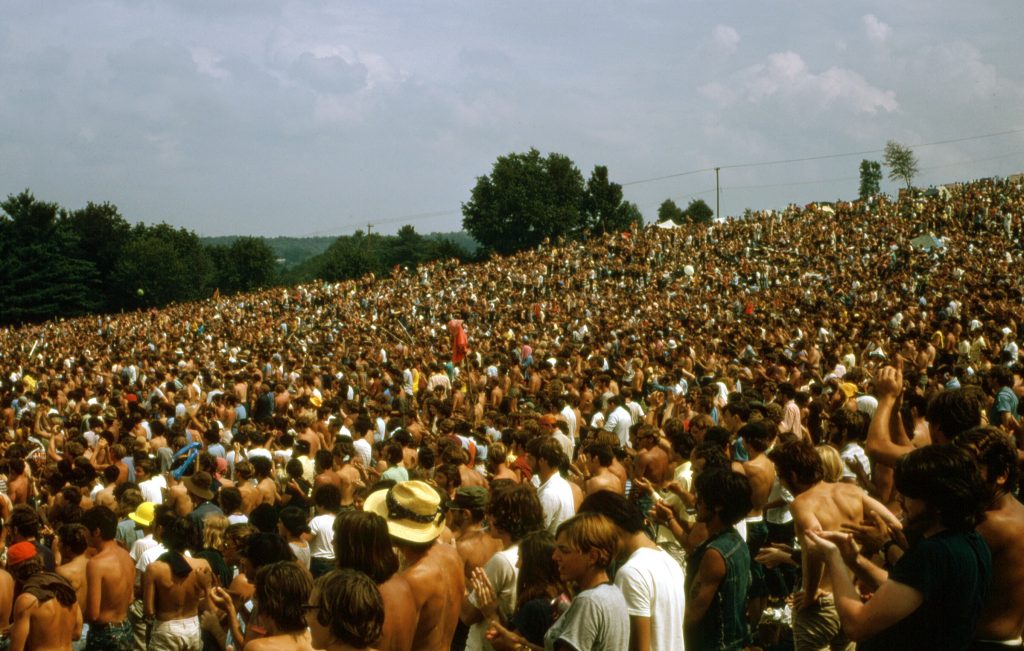 After Santana finished “Soul Sacrifice” 500,000 people stood to cheer, applaud, stomp, shout, and whistle. It was a physical event. I stood and took two pictures. This one and the next. 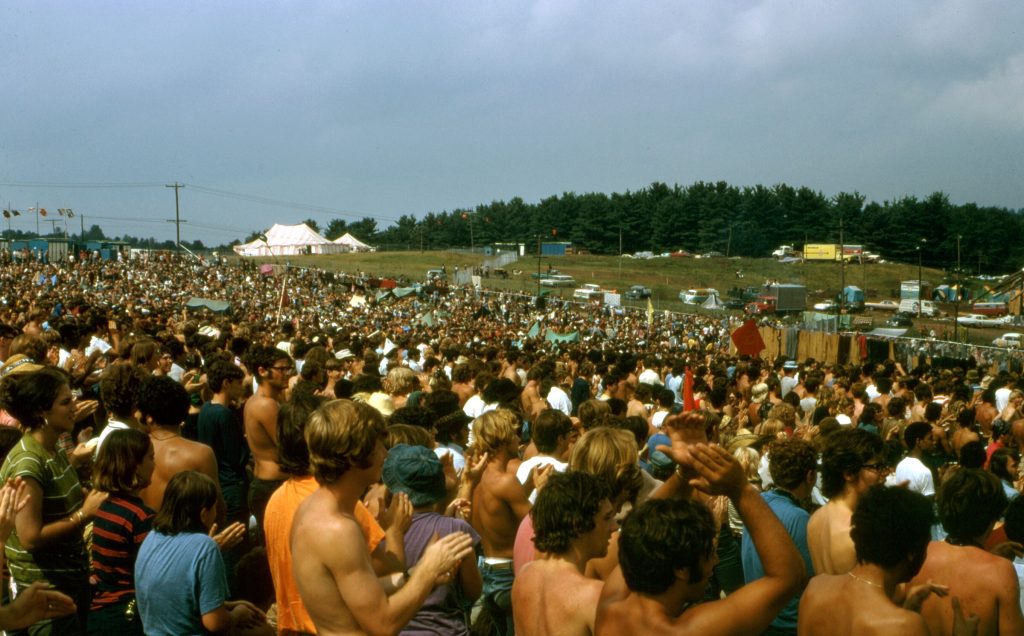 The pink and white tent in the background is the hospital tent. Ask people what the most common medical issue was that weekend and most will answer, “Drug-related.” While that was an issue, the fact that soda and beer cans had pop tops that came off completely and often were thrown on the ground meant that many bare-footed people cut their feet. That was the most common medical issue. 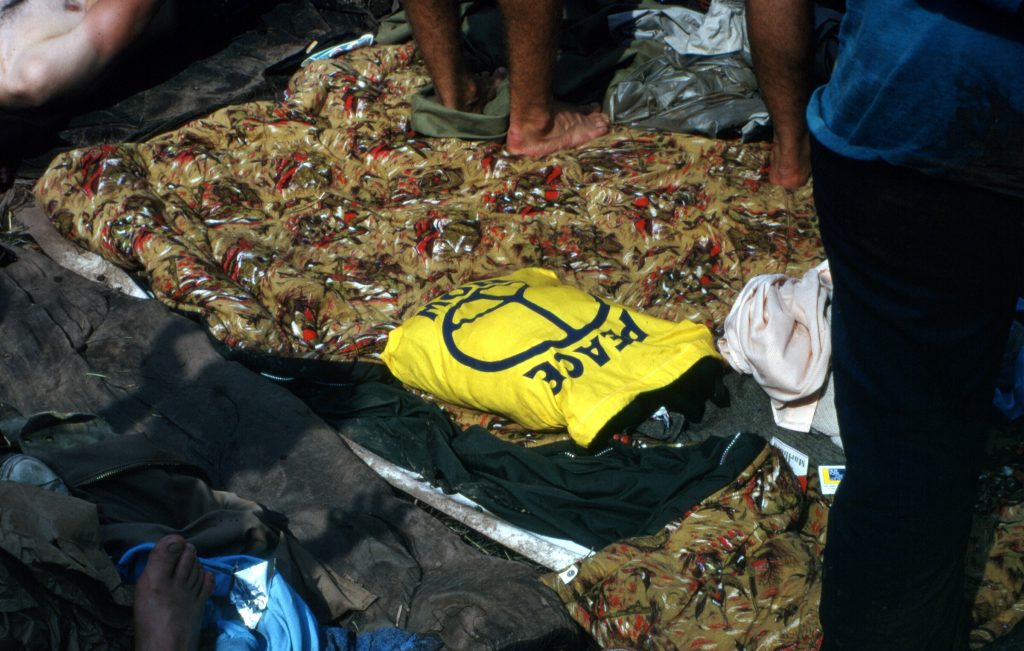 Not a crowd shot, but simple a pack of Marlboro and peace pillow on top of the typical sleeping bag many of us brought. Notice the bare feet. 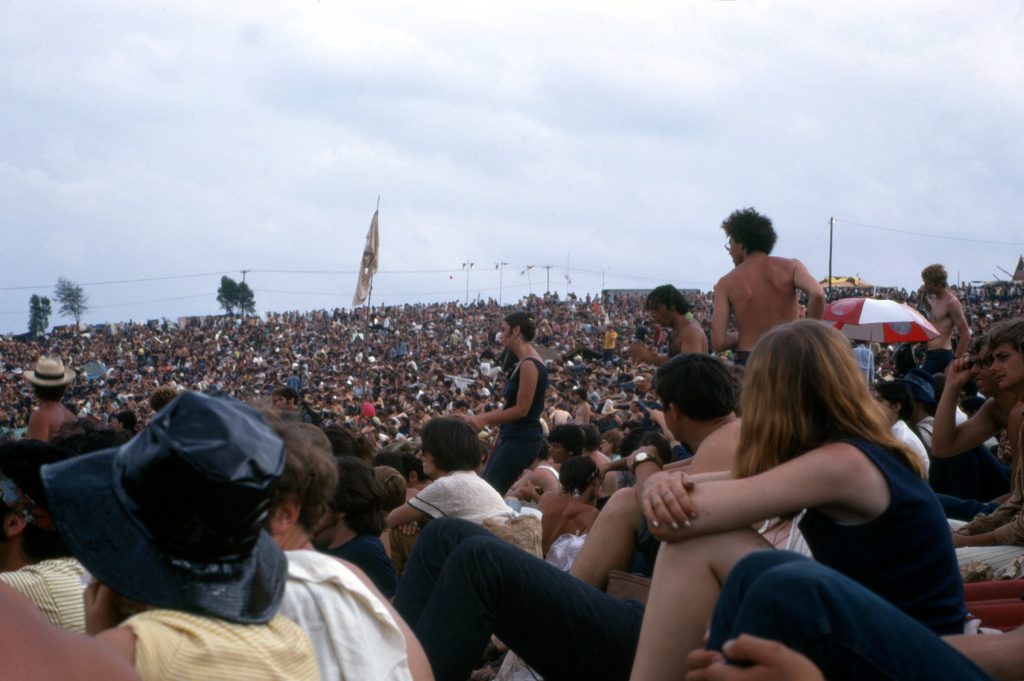 Another crowd shot. Perhaps there was a reason why, but it’s lost in my memory. 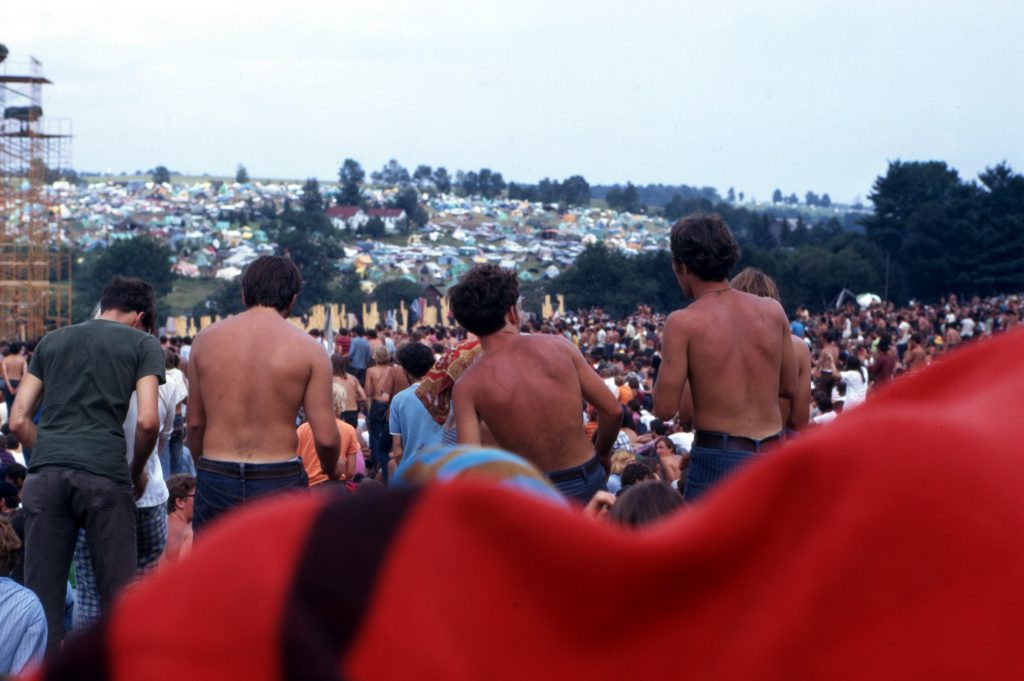 When I try to explain who was at the festival, I sometimes half-jokingly say, “White kids getting sunburned.” 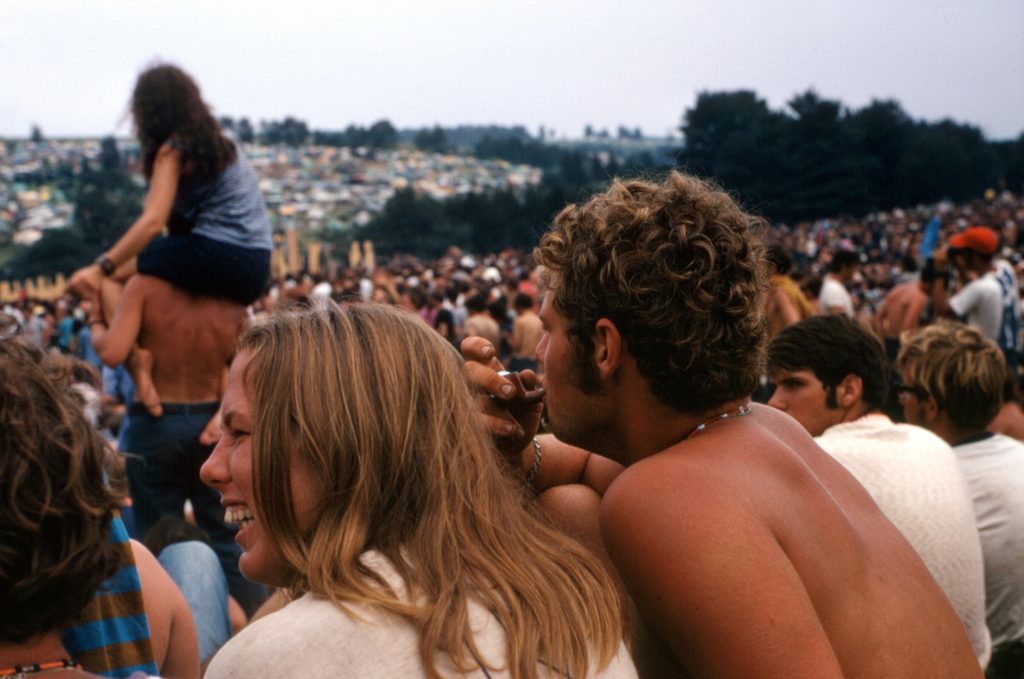 Everyone was high? Not quite, but these friendly people offered a hit to Tony and me. We politely declined. 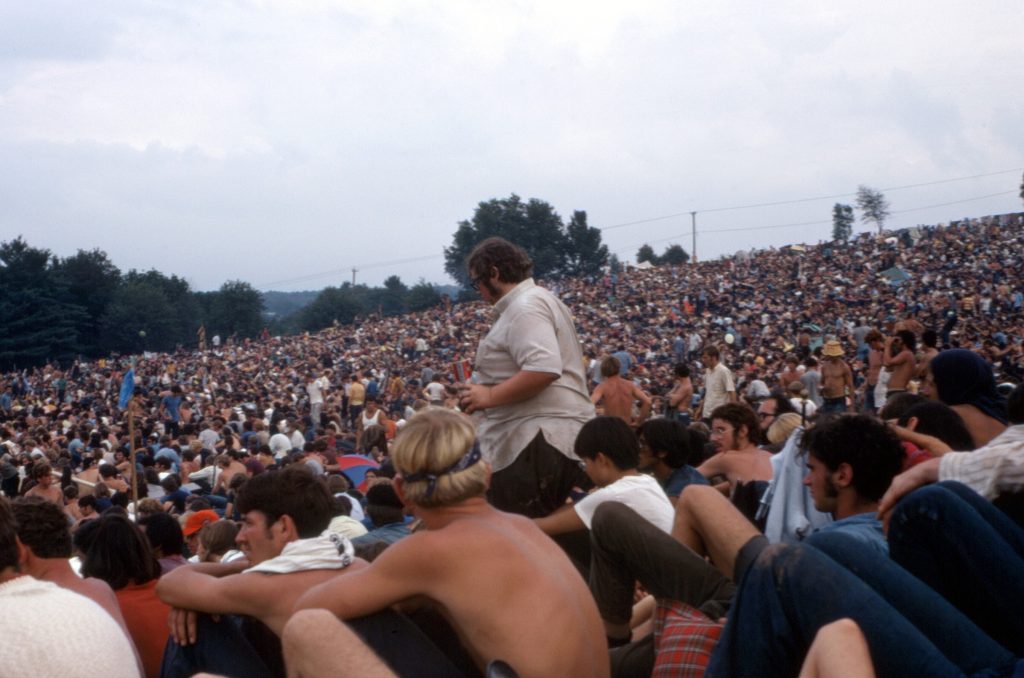 This lucky guy scored a can of soda. Now he has to find his way back. 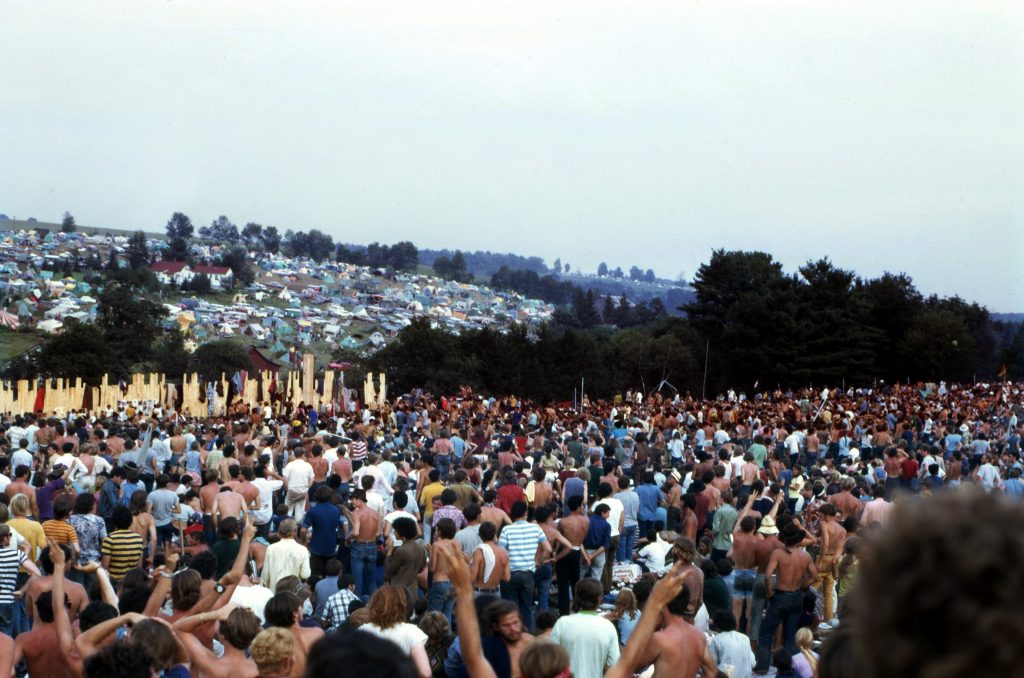 Yet another crowd shot. Check again for the rugby shirts v any tie-dyed shirts. 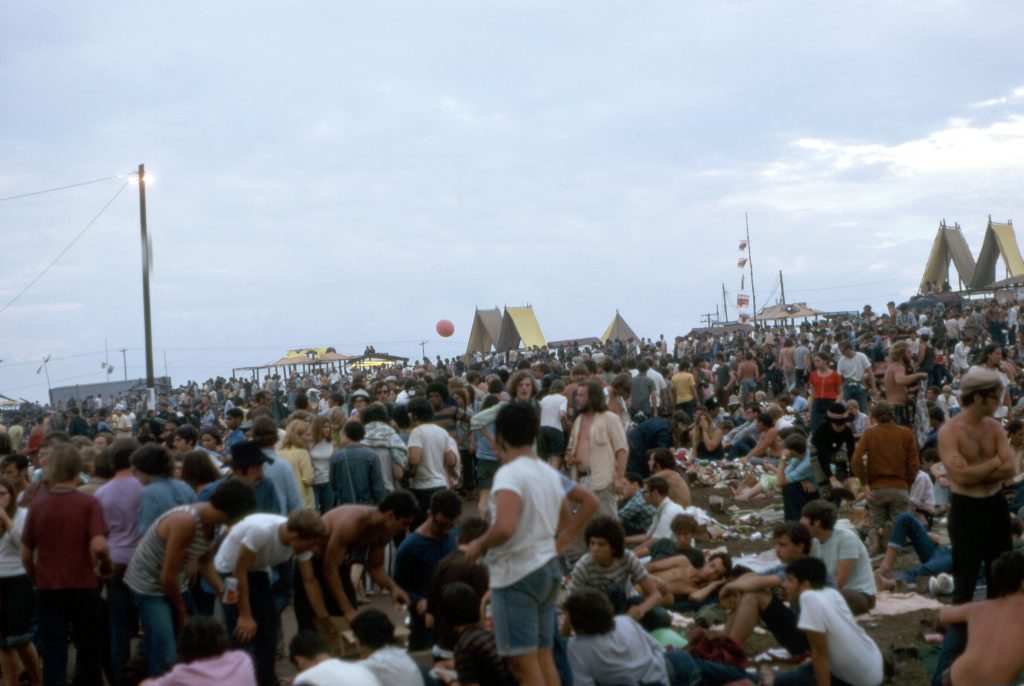 Evening. Hungry. We meandered to the Food for Love tents. Empty. Neither food nor love. 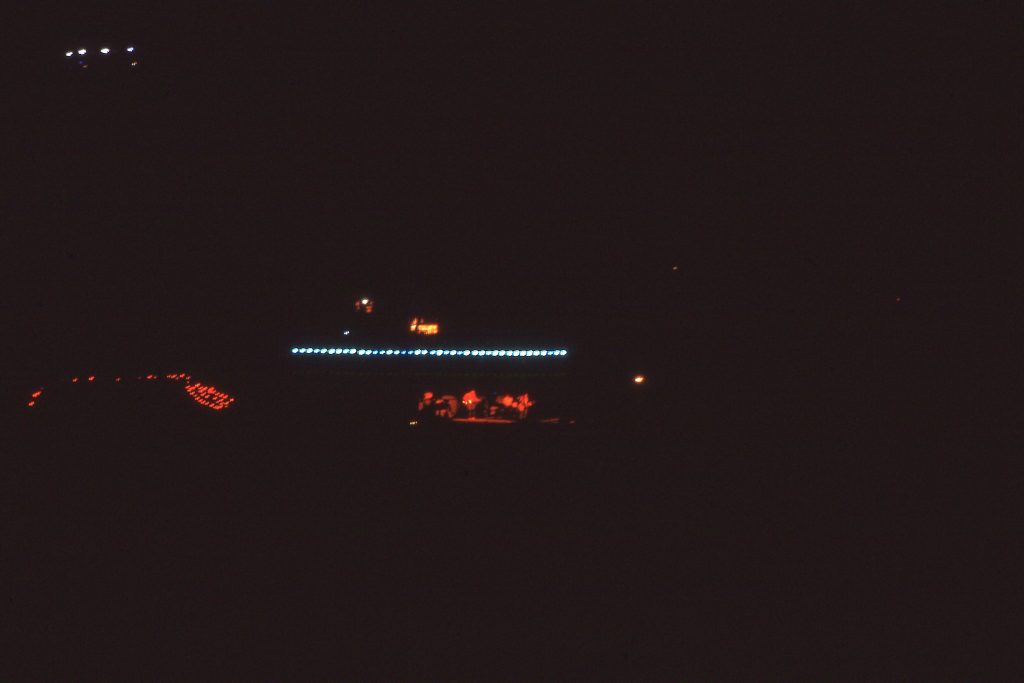 The one night shot. Pretty sure it’s Mountain playing. Note the lighting on the left along the wooden walkway built for staff and musicians to get from the other side of the road to the staging area. 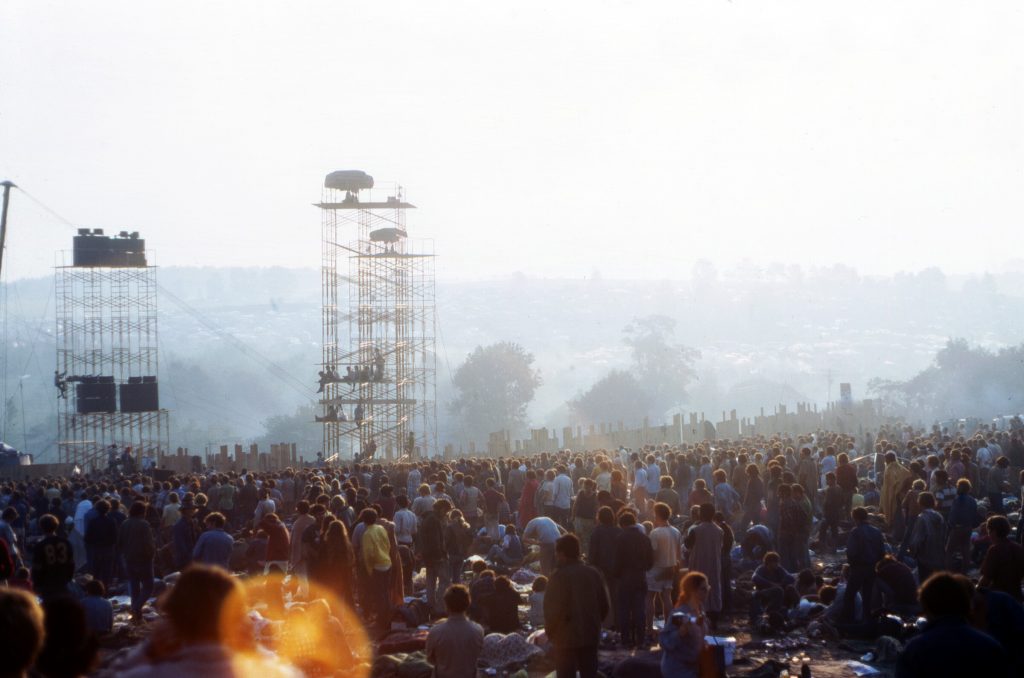 The Who had finished, the misty Sunday sunrise appeared, and the Jefferson Airplane would close Saturdays 22-hour marathon of music. 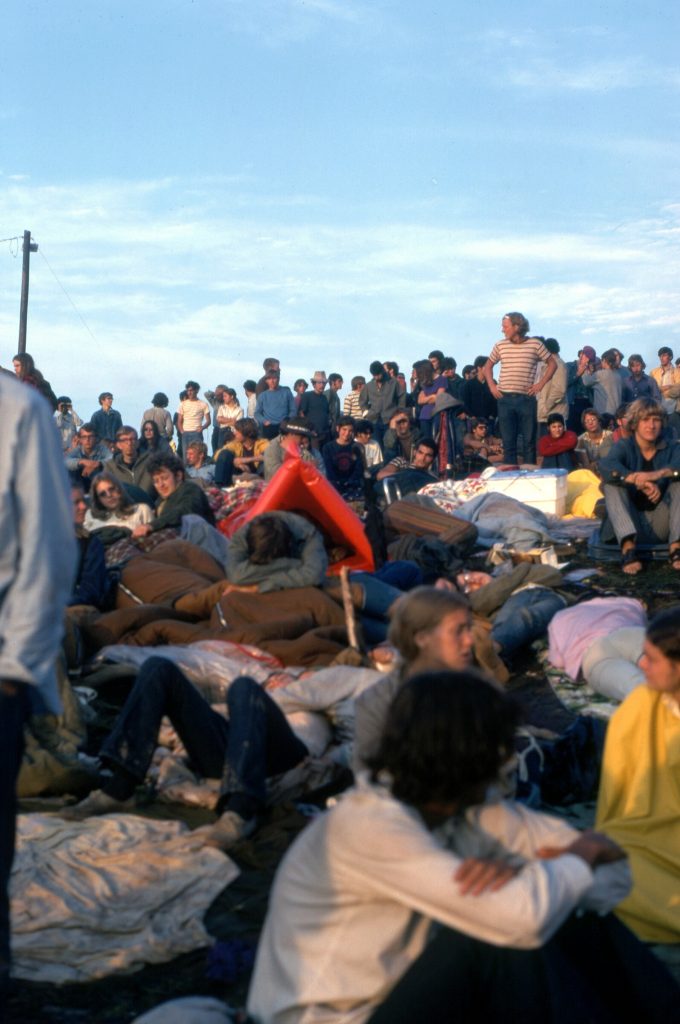 Some Sunday risers while some still sleep in their blow-up tents. Striped shirt @ 1 o’clock! 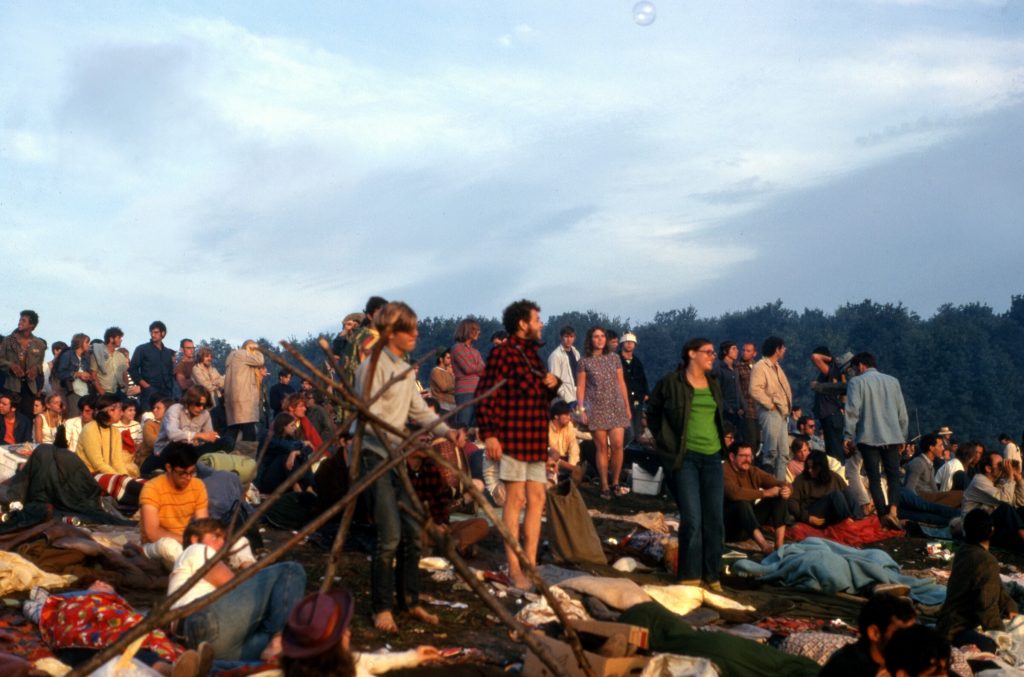 More Sunday morning risers with an abandoned tee-pee framework. And can you see the bubble? It’s why I took the picture. 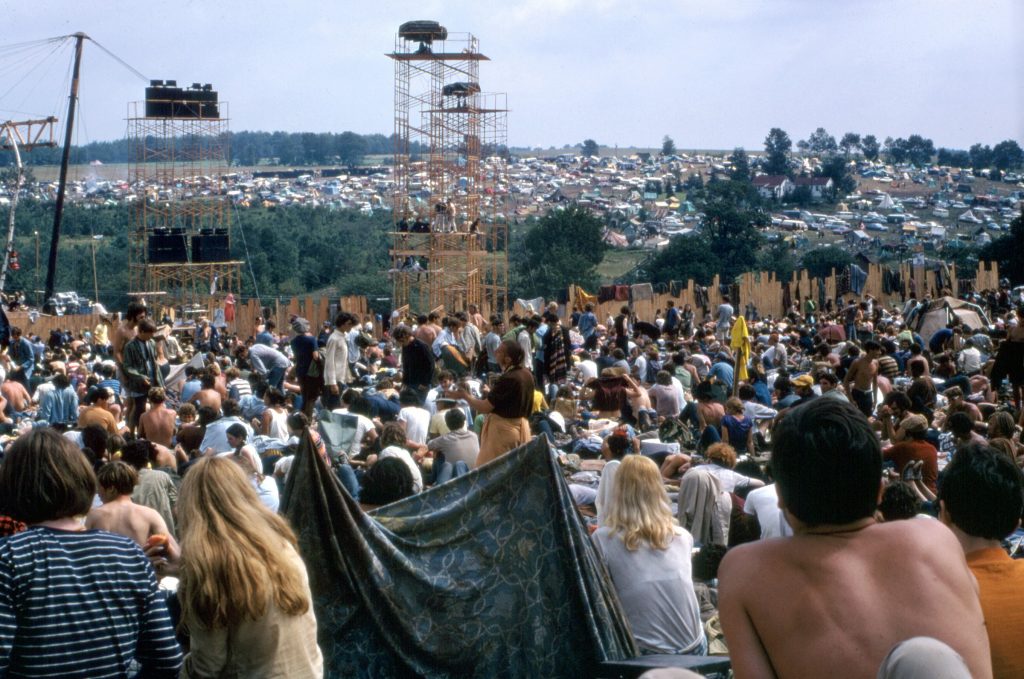 Waiting for Sunday’s music to begin. A Hare Krishna person in the middle. 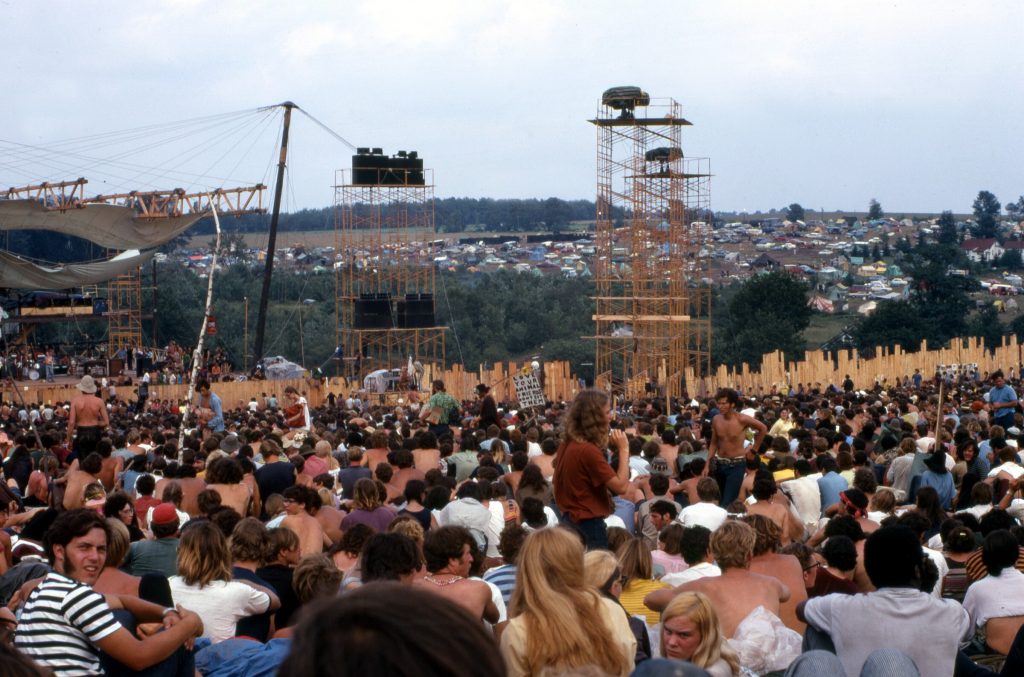 Click for sure to enlarge and read the sign of this guy who walked around with his banner–“Love Your Animal Friends, Don’t Eat Them.” His name was Moonfire. 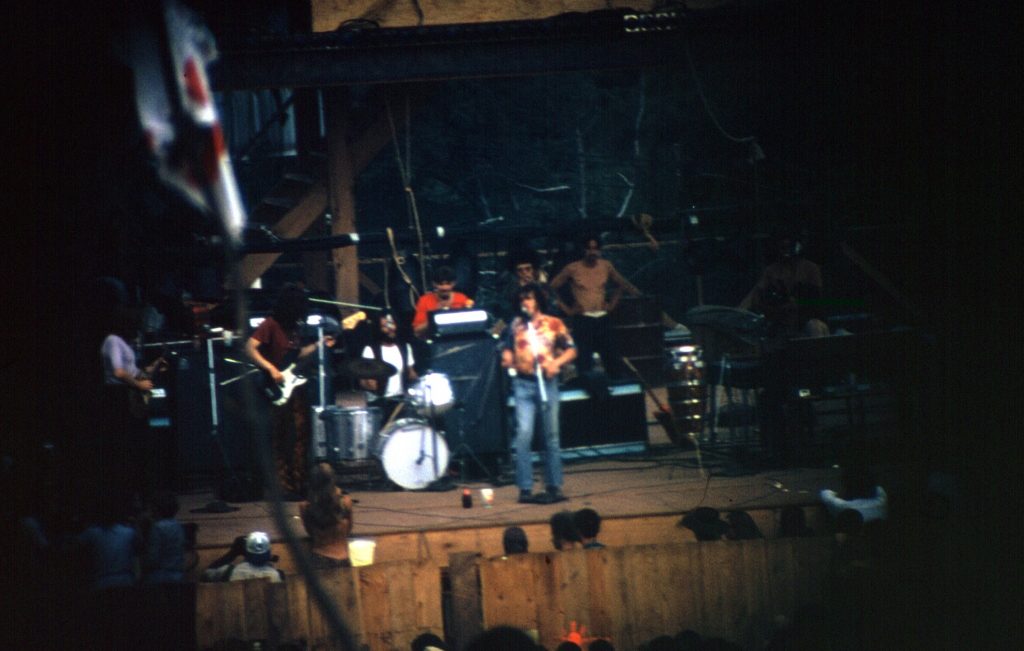 Sunday music began with Joe Cocker. One of those binocular shots. 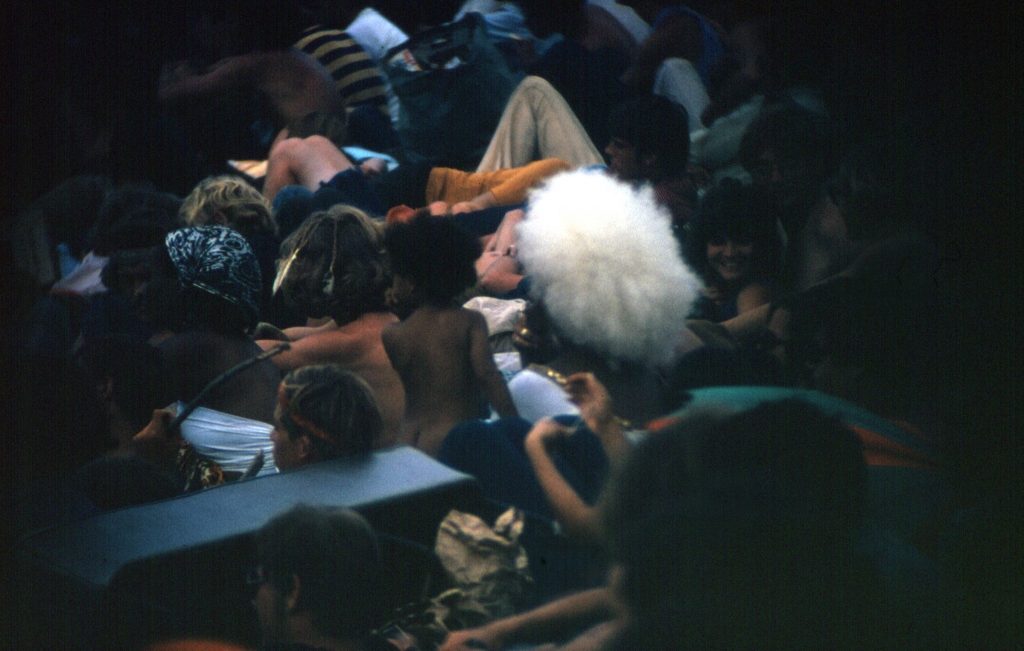 My last shot. This woman had the largest afro I’d ever seen and it was bleached white besides. Nope. I later found out it’s a wig. Note the kid (headband) sitting on his Jeep seat. I call him the smartest person at Woodstock because he was the only one with a seat!