July 19 – 20, 1848: Seneca Falls Convention About 300 people, including 40 men, met at America’s first women’s rights convention in Seneca Falls, New York. There they adopt a Declaration of Sentiments, modeled closely after the Declaration of Independence, asserting the “self-evident” truth that “all men and women were created equal.” The delegates also adopt eleven resolutions, including one declaring it “the duty of women of this country to secure to themselves their sacred right to the elective franchise.” (NPR article) (see January 23, 1849) 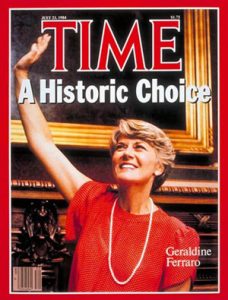 July 19, 1984: Geraldine Ferraro accepted the nomination of running mate to Democratic presidential candidate Walter Mondale. She was the first woman to be nominated for Vice President by either the Democratic or Republican Party. (2011 NYT obit) (see Dec 20)

July 19, 1911: Pennsylvania became the first state in the US to approve laws allowing censorship of movies. (see February 23, 1915)

July 19, 2018: hours after The Associated Press reported that Miami Dolphins players who protest on the field during the anthem could be suspended for up to four games under a team policy issued, the NFL and the players union issued a joint statement saying the two sides were talking things out.

“The NFL and NFLPA, through recent discussions, have been working on a resolution to the anthem issue. In order to allow this constructive dialogue to continue, we have come to a standstill agreement on the NFLPA’s grievance and on the NFL’s anthem policy. No new rules relating to the anthem will be issued or enforced for the next several weeks while these confidential discussions are ongoing,”  (FS & CK, see Aug 30; Labor, see Aug 25)

July 19, 1919: racial violence erupted in Washington, D.C. when mobs of U.S. soldiers and sailors, home from the war in Europe, attacked African-Americans in response to rumors that an Africa-American had attempted to rape the white wife of a sailor. The police were reportedly “nowhere to be seen” as a mob of about 400 whites invaded the African-American neighborhood in southwest Washington. (Black Past article) (see July 27)

July 19, 1958: a local NAACP chapter on this day sponsored a sit-in in Wichita, Kansas, challenging racially segregated public accommodations. The sit-in was successful, and local lunch counters were desegregated on August 11, 1958.

The Wichita sit-in was significant because the conventional history of the Civil Rights Movement presents the sit-in movement challenging segregated lunch counters and other public accommodations as beginning in Greensboro, North Carolina, on February 1, 1960. In fact, there were a number of earlier sit-ins. See, for example, the early sit-in on April 17, 1943; January 20, 1955; and August 19, 1958. The significance of the February 1960 sit-in is that it launched a national sit-in movement that swept the South and transformed the Civil Rights Movement. (NPR article) (see Aug 19)

July 19, 1967: a race riot broke out in the North Side of Minneapolis on Plymouth Street during the Minneapolis Aquatennial Parade and business were vandalized and fires break out in the area, although the disturbance is quelled within hours. However, the next day a shooting sets off another incident in the same area that leads to 18 fires, 36 arrests, 3 shootings, 2 dozen people injured, and damages totaling 4.2 million. There will be two more such incidents in the following two weeks. (MNopedia article) (BH & RR, see July 24)

July 18, 2013: Willie Reed, who had changed his name to Willie Louis after the murder trial of Emmett Till and had moved to Chicago, died. Louis, one of the last living witnesses for the prosecution in the Till case, died in Oak Lawn, Ill., a Chicago suburb. He was 76. (BH, see July 19; see ET for expanded story)

July 19, 2013:  President Barack Obama grappled with the Trayvon Martin case in the most personal of terms telling Americans that the slain youth “could have been me 35 years ago” and urging them to do some soul searching about their attitudes on race. He said it may be time to take a hard look at “stand your ground” self-defense laws, questioning whether they contribute “to the kind of peace and security and order that we’d like to see.” (BH & TMS, see July 20; SYG, see Aug 8)

July 19, 2015: in Cincinnati, Ohio, Ray Tensing, a University of Cincinnati police officer, shot and killed Samuel DuBose, an unarmed man, during a traffic stop for a missing front license plate. Tensing fired after DuBose started his car. Tensing stated that DuBose had begun to drive off and that he was being dragged because his arm was caught in the car. Prosecutors alleged that footage from Tensing’s bodycam showed that he was not dragged and a grand jury indicted him on charges of murder and voluntary manslaughter. [Tensing settlement] (B & S, see Sept 8; DuBose, see January 18, 2016)

July 19, 2013: U.S. Department of Housing and Urban Development issued a proposed regulation that for the first time clearly defined the steps local and state governments that receive HUD funding must take to examine housing segregation based on race and show they are in line with the Fair Housing Act. (see Dec 3)

July 19, 2018: the Interior Department proposed the most sweeping set of changes in decades to the Endangered Species Act, the law that brought the bald eagle and the Yellowstone grizzly bear back from the edge of extinction but which Republicans say is cumbersome and restricts economic development.

The proposed revisions had far-reaching implications, potentially making it easier for roads, pipelines and other construction projects to gain approvals than under current rules. One change, for instance, would eliminate longstanding language that prohibits considering economic factors when deciding whether or not a species should be protected.

The agency also intended to make it more difficult to shield species like the Atlantic sturgeon that are considered “threatened,” which is the category one level beneath the most serious one, “endangered.” (see Aug 2)

July 19, 2018: U.S. District Judge Keith P. Ellison found that India Landry (see October 2, 2017) had a legitimate claim that her equal protection rights were breached and ruled that her family’s lawsuit can proceed over allegations that her expulsion was racially driven and violated her constitutional rights. (next PA, see Aug 30; next SR, see Sept 26; next Landry, see Dec 28)

July 19, 2018: Federal officials said that 364 children had been reunited with their parents to comply with a federal judge’s order that the Trump administration bring together undocumented immigrant families separated under its “zero tolerance” policy. A majority of the nearly 2,600 immigrant children – who were detained at the U.S.-Mexico border with their parents for trying to illegally enter the country – still remained apart from their parents in facilities around the country.  (see July 24)