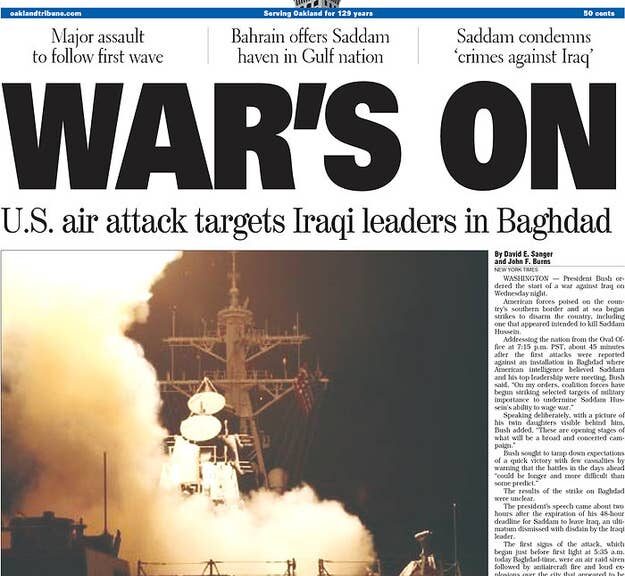 March 19, 2018: the US Supreme Court rejected a second emergency application from Republican lawmakers in Pennsylvania seeking to overturn decisions from that state’s highest court, which had ruled that partisan gerrymandering had warped Pennsylvania’s congressional map and then imposed one of its own.

The ruling meant a new map drawn by the Pennsylvania Supreme Court would very likely be in effect in 2018’s elections, setting the stage for possible gains by Democrats. Under the current map, Republicans held 12 seats. Democrats held five and were expected to pick up another when the result of a special election the previous week was certified. 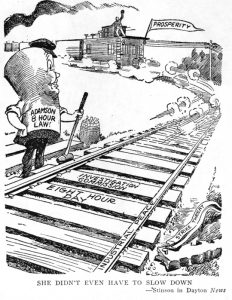 March 19, 1935: Harlem Riot, a 12-year-old boy was caught shoplifting and threatened with physical punishment but the boy bit the employee’s hand and escaped. A number of coincidences cause local residents to assume that the boy was beaten to death and riots follow.

Whereas previous race riots had been characterized by violent clashes between groups of black and white rioters, subsequent riots would resemble the riot in Harlem. (RR, see June 15, 1943; BH, see June 18, 1935)

March 19, 1939: after he prevailed on December 12, 1938 in a lawsuit to force the University of Missouri to accept him to its all-white law school, a Lloyd Gaines went missing and was never seen  again.

Family members suspected that Gaines was abducted and murdered for his activism, while state officials claimed he fled and assumed another identity in response to threats against him and his loved ones. To this day, Mr. Gaines’s fate is unknown.[EJI article]  (next BH, see Apr 9)

March 19, 1965:  NY Supreme Court Justice David L. Malbin found  that the jury in the Elba Borrero case had been influenced by “prejudice and racial bias” and reversed George Whitmore, Jr.’s conviction, granting him a new trial. Malbin stated: “The hearing revealed that prejudice and racial bias invaded the jury room. Bigotry I any of its sinister forms is reprehensible, it must be crushed, never to rise again. It has no place in an American courts of Justice.”

On the same day, a bipartisan commission recommended  the end of capital punishment in New York State. (see Whitmore for expanded story)

March 19, 2015: Manhattan Federal Judge Analisa Torres, overseeing reforms to the NYPD’s stop and frisk program, affirmed the “important perspective” of police unions in the overhaul. Torres said the five unions representing cops should be allowed to give input regarding any reforms proposed by the city. After the unions voice their opinions, the reforms will go to the court-appointed federal monitor, then to Torres for final approval, she wrote. (see July 9)

The high court offered no explanation for its 4-2 decision that denied a rare bid by Illinois’ attorney general and a special prosecutor to get the justices to toss a lower court’s sentence. One judge issued a strong dissent and one partially dissented. (LM, see  June 14)

A guilty verdict could put Rosfeld behind bars for life.

Rosfeld lawyers were expected to argue that the June 19 shooting of Antwon Rose II after a traffic stop in East Pittsburgh was justified, while prosecutors push for a conviction in the criminal homicide case.

Bystanders captured the shooting on video and posted it online, triggering a series of protests in the Pittsburgh area that included a  march that shut down a major highway.

The jury was made up of six men and six women, including three African-Americans. (next B & S and AR, see Mar 20 )

March 19, 1955: The Blackboard Jungle released. The NY Times review stated: Evan Hunter’s “Blackboard Jungle,” which tells a vicious and terrifying tale of rampant hoodlumism and criminality among the students in a large city vocational training school, was sensational and controversial when it appeared as a novel last fall. It is sure to be equally sensational and controversial, now that it is made into a film.

March 19, 1964 : British Prime Minister Harold Wilson, (they would sing about him later in “Taxman”) presented The Beatles with the award for being “Show Business Personalities of 1963” at the Variety Club of Great Britain Annual Show Business Awards. (see Mar 21) 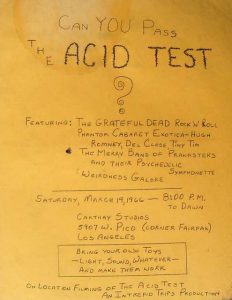 March 19, 1964: a photograph of a Vietnamese man holding his dead child and begging US soldiers for help and other images from South Vietnam earned Associated Press photographer Horst Faas the Pulitzer Prize in 1965. The caption, as it appeared in the Milwaukee Sentinel on March 20: The body of a child killed in battle Thursday in South Vietnam was held by his father as rangers of the Vietnamese army looked down from a tank. The child was killed as government forces pursued Vietcong guerrillas into a village near the Cambodian border. The Vietnamese forces used bombers and armored personnel carriers against the guerrilla forces in the battle. (Vietnam, see in “April – June”; Faas, see July 18, 1965) 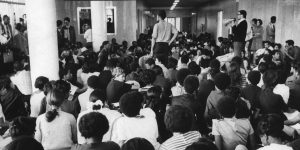 March 19 – 23, 1968: students at Howard University in Washington, D.C., staged rallies, protests and a 5-day sit-in, laying siege to the administration building, shutting down the university in protest over its ROTC program and the Vietnam War, and demanding a more Afrocentric curriculum. (Harvard Crimson article) (see Mar 20) 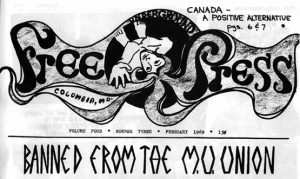 March 19, 1973: PAPISH v. BOARD OF CURATORS OF THE UNIVERSITY OF MISSOURI ET AL. Barbara Papish, a graduate student in the University of Missouri School of Journalism, was expelled for distributing on campus a newspaper “containing forms of indecent speech” in violation of a bylaw of the Board of Curators. The newspaper, the Free Press Underground, had been sold on this state university campus for more than four years pursuant to an authorization obtained from the University Business Office. The particular newspaper issue in question was found to be unacceptable for two reasons. First, on the front cover the publishers had reproduced a political cartoon previously printed in another newspaper depicting policemen raping the State of Liberty and the Goddess of Justice. The caption under the cartoon read: “. . . With Liberty and Justice for All.” Secondly, the issue contained an article entitled “Motherfucker  Acquitted,” which discussed the trial and acquittal on an assault charge of a New York City youth who was a member of an organization known as “Up Against the Wall, Motherfucker”

The U.S. Eighth Circuit Court of Appeals had ruled her freedom of expression could be subordinated to the “conventions of decency in the use and display of language and pictures” on a public campus without violating the First Amendment.

The US Supreme court voted  6-3 to overturn that decision. The Supreme Court noted that the Eighth Circuit’s ruling had come several days before Healy v. James, 408 U.S. 169 (1972), in which the Court had said that even though a state university could enforce reasonable rules governing student conduct, “state colleges and universities are not enclaves immune from the sweep of the First Amendment.” In a per curiam opinion, the Papish majority said Healy made “clear that the mere dissemination of ideas – no matter how offensive to good taste – on a state university campus may not be shut off in the name alone of ‘conventions of decency.'” (see June 21)

March 19, 2015: Manhattan Federal Judge Analisa Torresm, overseeing reforms to the NYPD’s stop and frisk program, affirmed the “important perspective” of police unions in the overhaul. Torres said the five unions representing cops should be allowed to give input regarding any reforms proposed by the city. After the unions voice their opinions, the reforms will go to the court-appointed federal monitor, then to Torres for final approval, she wrote. (see July 9)

March 19, 1988:  two British Army Corporals were killed after driving straight into a funeral for the victims of the Milltown Cemetery attack three days earlier, after they were mistakenly thought to be carrying out a similar attack to the one by Ulster Defence Association (UDA) member Michael Stone, in which he killed three Catholics attending the funeral. (see Troubles for expanded story) 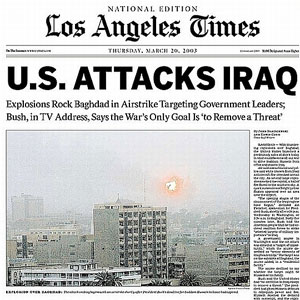 March 19, 2003: U.S. and coalition forces launched missiles and bombs at targets in Iraq including a “decapitation attack” aimed at Iraqi President Saddam Hussein and other top members of the country’s leadership.

There were nearly 300,000 American, British and other troops at the border.

President George W. Bush warned Americans that the conflict “could be longer and more difficult than some predict.” He assured the nation that “this will not be a campaign of half-measures, and we will accept no outcome except victory.” (see Mar 23)

March 19, 2014: the Rev. Fred Phelps, the virulently anti gay preacher who drew wide, scornful attention for staging demonstrations at military funerals as a way to proclaim his belief that God was punishing America for its tolerance of homosexuality died. He was 84. (see Sept 8)

March 19, 2018: the US Supreme Court turned down a request that it take a fresh look at whether the death penalty was constitutional anywhere in the nation.

The court also refused to consider a narrower question in the same case: Whether Arizona’s capital sentencing system, which appears to make virtually all murderers eligible for the death penalty, violates the Constitution.

March 19, 2018: saying that he was “saving the unborn,” Gov. Phil Bryant of Mississippi signed into law [Gestational Age Act] a measure that would ban almost all abortions after 15 weeks of pregnancy. Abortion rights supporters called it the earliest abortion ban in the country, and said it was an unconstitutional restriction that defied years of federal court precedent over the limits states may impose on abortion providers.

March 19, 2019: the Supreme Court adopted a strict interpretation of a federal immigration law, saying it required the detention of immigrants facing deportation without the possibility of bail if they had committed crimes, including minor ones, no matter how long ago they had been released from criminal custody.

The vote was 5 to 4, with the court’s more conservative justices in the majority. Justice Samuel A. Alito Jr., writing for the majority, said the plain language of a federal law required the result.

Justice Stephen G. Breyer summarized his dissent from the bench, a sign of profound disagreement. He said the majority had violated the nation’s basic values.

“The greater importance of the case,” he said, “lies in the power that the majority’s interpretation grants the government. It is a power to detain persons who committed a minor crime many years before. And it is a power to hold those persons, perhaps for many months, without an opportunity to obtain bail.” (see Mar 26)