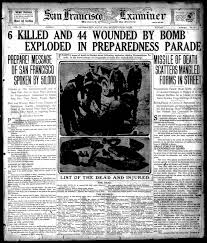 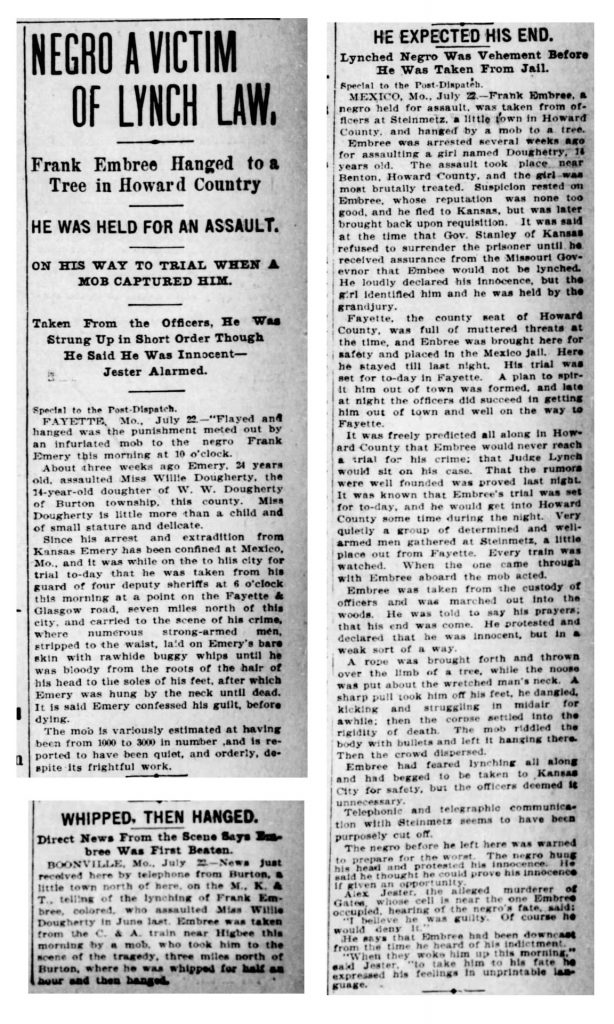 July 22, 1899: a white mob abducted Frank Embree from officers transporting him to stand trial and lynched him in front of a crowd of over 1,000 onlookers in Fayette, Missouri.

About one month earlier, Frank Embree had been arrested and accused of assaulting a white girl. Though he was scheduled to stand trial on July 22, the town’s residents grew impatient and decided to take “justice” into their own hands by lynching Mr. Embree instead.

According to newspaper accounts, the mob attacked officers transporting Embree, seized him, and loaded him into a wagon, then drove him to the site of the alleged assault. Once there, Mr. Embree’s captors immediately tried to extract a confession by stripping him naked and whipping him in front of the assembled crowd, but he steadfastly maintained his innocence despite this abuse. After withstanding more than one hundred lashes to his body, Embree began screaming and told the men that he would confess. Rather than plead for his life, Embree begged his attackers to stop the torture and kill him swiftly. Covered in blood from the whipping, with no courtroom or legal system in sight, Embree offered a confession to the waiting lynch mob and was immediately hanged from a tree.

Though published photographs of Embree’s lynching clearly depict the faces of many of his assailants, no one was ever arrested or tried for his death. [EJI article] (next BH & Lynching, see January 20, 1900; see 19th century for expanded lynching chronology)

July 22, 1962: Martin Luther King Jr. said that Federal District Judge J. Robert Elliott was engaged to an extent in a “conspiracy” to maintain segregation. While bringing food to jailed demonstrators in Camilla, Georgia, Marion King is assaulted by police officers who hit and kick her until she is unconscious. King was pregnant. (see  Albany for expanded story) 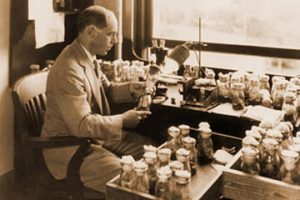 July 22, 1927:  geneticist Hermann Muller reported on his experiments in Science. He had exposed fruit flies to X-rays. This ionizing radiation had the power to penetrate cells and alter genetic material. Some of Muller’s fruit flies had mutant genes and some of those mutations were heritable (they could passed down to future generations) Plant breeders began to use x-rays in attempts to induce mutations that might be beneficial. (Nobel Prize site article)(see December 17, 1938) 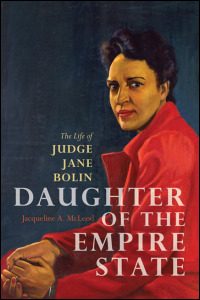 July 22, 1999: the US Supreme Court rules in Kolstad v. American Dental Association that a woman can sue for punitive damages for sex discrimination if the anti-discrimination law was violated with malice or indifference to the law, even if that conduct was not especially severe. Carole Kolstad had claimed that the application process for her former director’s director position was a sham alleging that the respondent’s decision to promote another person was an act of employment discrimination proscribed under Title VII. (Oyez article) (see May 15, 2000) 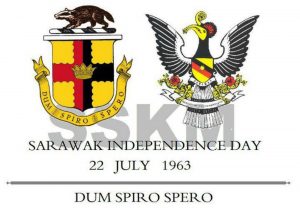 Around this time, Woodstock Ventures, seeing the Earth Light Theatre on the El Monaco site, ask if the the troupe would do performances at the festival. They agreed.

Under the new rules, any organization that provides or refers patients for abortions was ineligible for Title X funding.

The Department of Health and Human Services laid out a timeline for organizations to comply. They were to submit written assurance by August 19 that they did not provide abortion or include abortion as a method of family planning. HHS said the government did not intend to bring enforcement actions against clinics that were making “good-faith efforts to comply,” according to The Associated Press.

The HHS had said on  July 15 that it would begin enforcing the new rules and requiring compliance immediately. [NPR story] (see Aug 19)