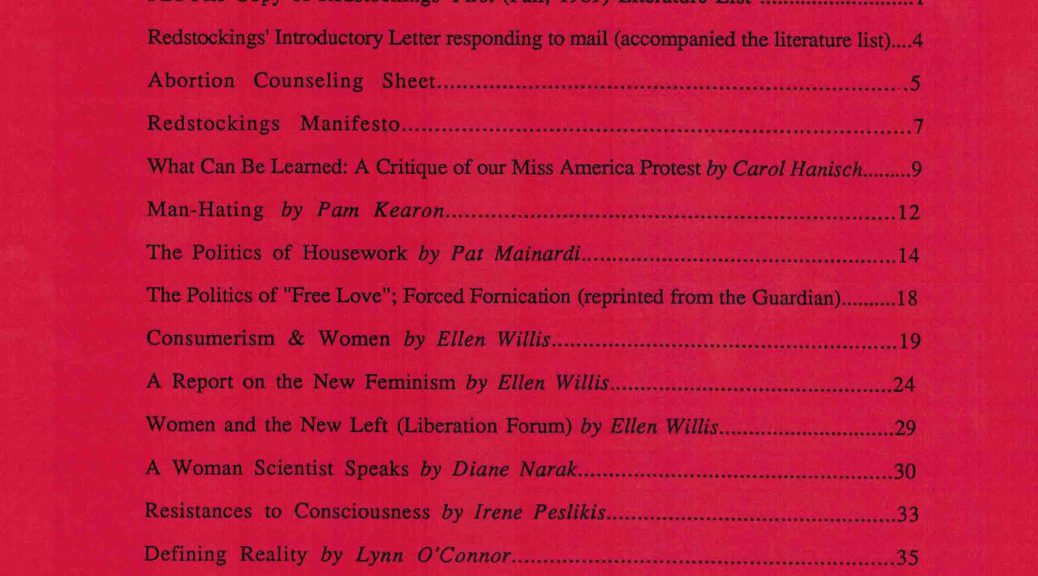 The Tet Offensive in January. The publication of ” Soul on Ice” by Eldridge Cleaver in February. My Lai Massacre in March. King assassination in April. Poor People’s Campaign  in May. Robert Kennedy assassination in June. American Indian Movement  founded in July. Riots during Democratic Convention in Chicago in August. Miss America protest in September. Tommie Smith and John Carlos protest at Olympics during medal ceremony in October.  Shirley Chisholm first Black woman elected to Congress in November.  And in December, Apollo 8 completed the first manned orbit of the moon.

A pretty good representation of “those” 60s.

Let’s go back to that Miss America protest in September. It was organized by the New York Radical Women and during the protest women threw pots, false eyelashes, mops, and other items into a trash can. Despite the lore, they did not burn bras. The protesters also successfully unfurled a large “Women’s Liberation” banner  inside the contest hall. (One wonders what President Donald Trump would have to say about either happening today?)

On January 31, 1969, Ellen Willis and Shulamith Firestone formed  the group Redstockings after the breakup of New York Radical Women. According to their site, “Redstockings” was a name taken in 1969 …to represent the union of two traditions: the “bluestocking” label disparagingly pinned on feminists of earlier centuries–and “red” for revolution.

The group has gone through several changes since its founding, but its mission remains the same. From the beginning of its 1969 manifesto:

After centuries of individual and preliminary political struggle, women are uniting to achieve their final liberation from male supremacy.  Redstockings is dedicated to building this unity and winning our freedom.

I had never heard of Redstockings, which is likely my own indictment. Perhaps you have not either.

Perhaps we will now.