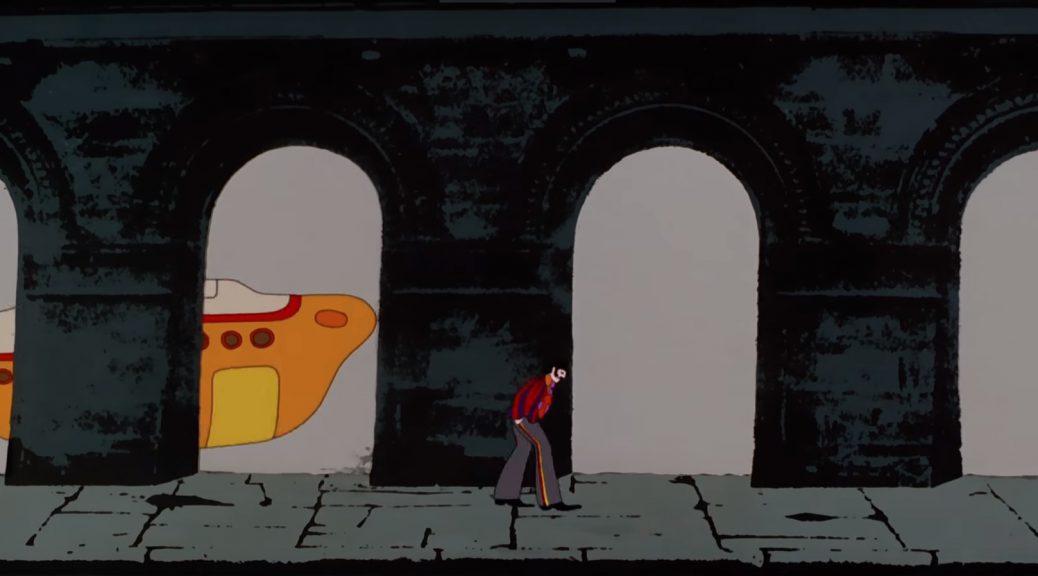 The Beatles released their Yellow Submarine album in the US on January 13, 1969. The album contained six Beatle songs on Side one and instrumental pieces from the movie on Side 2:

They had previously released “Yellow Submarine” and “All You Need Is Love,” as singles.

My sense is that to the average Beatle fan, the soundtrack, however interesting the songs may be, does not count as a “real” Beatle album. It’s more an interesting collection that reminds us of the much more enjoyable movie. Some information about the songs from Beatle.com:

Only a Northern Song has been described as Harrison’s “personal denunciation of the Beatles’ music publishing business.”

Hey Bulldog…written primarily by John Lennon(credited to Lennon–McCartney). It is one of the few Beatles’ songs to revolve around a piano riff.

It’s All Too Much was written and sung by George Harrison. It was originally recorded in 1967, shortly before the release of Sgt. Pepper’s. It had been slated to appear on the next release, Magical Mystery Tour, but it was pushed back.

Richie Unterberger of AllMusic wrote: What is here…is a good enough reason for owning the record, though nothing rates it as anything near a high-priority purchase. The album would have been far better value if it had been released as a four-song EP (an idea the Beatles even considered at one point, with the addition of a bonus track in “Across the Universe” but ultimately discarded).

A Rolling Stone magazine article about the song says that, “The Beatles’ most beloved kiddie song was written for — who else? — Ringo. As McCartney explained, “I thought, with Ringo being so good with children — a knockabout-uncle type — it might not be a bad idea for him to have a children’s song.” Years later, “Yellow Submarine” remains the gateway drug that turns little children into Beatle fans, with that cheery singalong chorus. It inspired the Beatles’ 1968 animated film, as well as Starr’s unofficial sequel on Abbey Road, “Octopus’ Garden.”