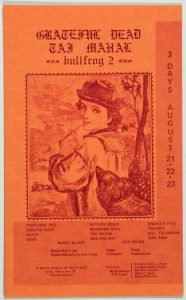 In 2020, a Cheryl Viuhkola Pelletier commented (see below) on this post. I asked her if she had any other memories. This was her response:

Since I ended up marrying Melvina’s son, Al Pelletier, I do have a first hand, eyewitness account of the festival.  I’m also writing about it and enjoy the research you provided.  So, far, your account sounds pretty accurate .  I do have some tid- bits from Al and myself as I attended with a good friend.  The traffic on Yankton Road was backed up for miles and miles ( very narrow two-lane twisty country road), and the cops were making it worse.  So, we left our cars parked where we were and started walking.  The police were trying to stop us from entering the farm, when I see this good-looking , dark-haired guy riding a white horse, shouting out to one and all, “Follow me.  I know a shortcut”.  Of course he did.  He could walk those acres in his sleep I was to learn later.   Those were the days…