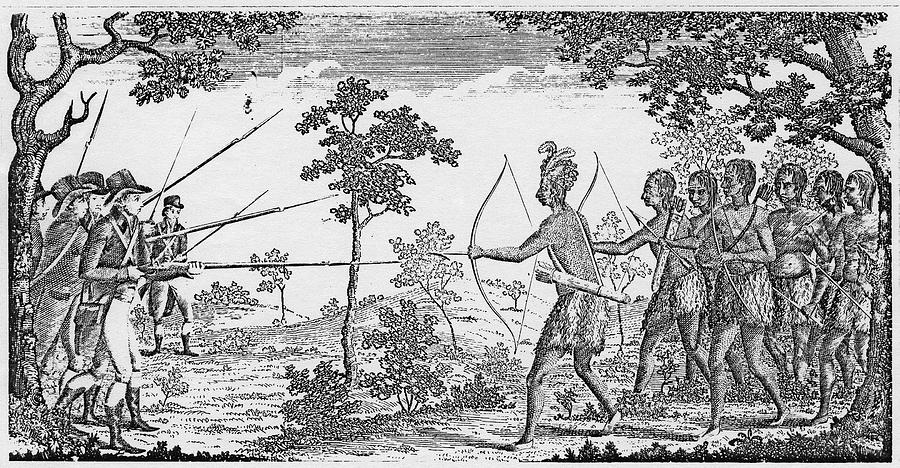 June 24, 1675: in colonial New England, King Philip’s War began when a band of Wampanoag warriors raided the border settlement of Swansee, Massachusetts, and massacred the English colonists there.

In the early 1670s, 50 years of peace between the Plymouth colony and the local Wampanoag Indians began to deteriorate when the rapidly expanding settlement forced land sales on the tribe. Reacting to increasing Native American hostility, the English met with King Philip, chief of the Wampanoag, and demanded that his forces surrender their arms. The Wampanoag did so, but in 1675 a Christian Native American who had been acting as an informer to the English was murdered, and three Wampanoag were tried and executed for the crime.

King Philip responded by ordering the attack on Swansee, which set off a series of Wampanoag raids in which several settlements were destroyed and scores of colonists massacred. The colonists retaliated by destroying a number of Indian villages. The destruction of a Narragansett village by the English brought the Narragansett into the conflict on the side of King Philip, and within a few months several other tribes and all the New England colonies were involved.  [History of Massachusetts article] (see August 12, 1676)

June 24, 1864: Colorado Governor John Evans warned that all peaceful Indians in the region must report to the Sand Creek reservation or risk being attacked. Evans’ offer of sanctuary was at best halfhearted. His primary goal in 1864 was to eliminate all Native American activity in eastern Colorado Territory, an accomplishment he hoped would increase his popularity and eventually win him a U.S. Senate seat. Immediately after ordering the peaceful Indians to the reservation, Evans issued a second proclamation that invited white settlers to indiscriminately “kill and destroy all…hostile Indians.” At the same time, Evans began creating a temporary 100-day militia force to wage war on the Indians. He placed the new regiment under the command of Colonel John Chivington, another ambitious man who hoped to gain high political office by fighting Indians. (see Nov 29) June 24, 1987: two Soviet ophthalmologists, Eduard Avetisov and Lev Katselson, examined Leonard Peltier and recommended treatment with drugs they said were available only in their country. Soviet bloc officials regarded him as a political prisoner. (see August 21, 1987) June 24, 1957: the US Supreme Court (in a 6-to-3 decision written by Justice William J. Brennan, Jr. ) held that obscenity was not “within the area of constitutionally protected speech or press.” The Court noted that the First Amendment was not intended to protect every utterance or form of expression, such as materials that were “utterly without redeeming social importance.” The Court held that the test to determine obscenity was “whether to the average person, applying contemporary community standards, the dominant theme of the material taken as a whole appeals to prurient interest.” The Court held that such a definition of obscenity gave sufficient fair warning and satisfied the demands of Due Process. Brennan later reversed his position on this issue in Miller v. California (June 26, 1975) [Oyez article] (LGBTQ, see Sept 7; FS, see Oct 3)

June 24, 1977: the Village of Skokie denied the Nazis the right to a permit to march in military style uniforms. (see Oct 21)

June 24, 1987: Ardith McPherson was a deputy constable working in Texas’s Harris County Constable’s office. McPherson had the radio on in her office, when she learned of an assassination attempt on President Reagan (March 30, 1981). During a conversation with another office worker, Lawrence Jackson, she remarked, “Shoot, if they go for him again, I hope they get him.” This comment, unbeknownst to McPherson, had been overheard by another deputy constable, who had then reported what he heard to Constable Rankin, effectively in charge of all those in the office. He requested to speak with McPherson, who admitted to him what she had said, stating, “Yes, but I didn’t mean anything by it.” After the conversation, Constable Rankin terminated her employment.

The Supreme Court affirmed the position of the Court of Appeals. The Court reasoned that, even though McPherson was a probationary employee who could be, as a condition of her hire, be fired for any reason the employer decided — even no reason at all — she deserved to be reinstated if she had been fired for merely exercising a right enshrined in the Constitution. Even though the state, as an employer, certainly has the right to determine certain modes of appropriate conduct among employees, the Court did not believe that this right balanced fairly against an employee’s right to discuss matters of “public concern.” The life or death of the President was deemed an obvious matter of public concern, which placed McPherson’s comments into the realm of protected speech, further bolstered by the fact that her comment did not amount to a bona fide threat on the President’s life. Just because a statement is incorrect, unpopular, or ill-advised, the Court determined, it does not mean it is beyond constitutional protection. [Justia article] (see January 6, 1988)

June 24, 1964:  thirty Freedom Summer workers from Greenville, Miss. made the first effort to register black voters in Drew, Miss., and local whites resisted with open hostility. Whites circled the workers in cars and trucks, some equipped with gun racks, making violent threats. One white man stopped his car and said, “I’ve got something here for you,” flaunting his gun. (BH, see June 25; VR, see August 6, 1965)

June 24, 1995:  South Africa’s national rugby team, the Springboks, won the World Cup final. The team had been banned from international competition until 1992, and was long seen as a symbol of oppression by many black South Africans. Mr. Mandela’s call for blacks to support the team was hailed as a masterly move toward racial reconciliation. He congratulated the team while wearing a green Springboks jersey, in a stadium full of cheering white rugby fans. (SA/A, see Nov 1;  see Mandela for his expanded chronology) June 24, 1964: the Federal Trade Commission announced that starting in 1965, cigarette manufactures would be required to include warnings on their packaging about the harmful effects of smoking. (see November 5, 1965)

June 24, 1966: the US Senate voted 76-0 for the passage of what will become the National Traffic and Motor Vehicle Safety Act. Signed into law by President Lyndon B. Johnson on September 9, the act created the nation’s first mandatory federal safety standards for motor vehicles.

The origins of the National Traffic and Motor Vehicle Safety Act can be traced directly of the efforts of consumer advocate Ralph Nader, who in 1965 published the bestselling “Unsafe at Any Speed.”  [US DoT article] (see Sept 9)

A Spaniard in the Works June 24, 2002:  the Supreme Court ruled 7-2 that juries, rather than judges, must make the crucial factual decisions as to whether a convicted murderer should receive the death penalty. Ring v. Arizona overturned the law of Arizona and four other states – Colorado, Idaho, Montana, and Nebraska – where judges alone decided whether there were aggravating factors that warrant capital punishment. The decision also raised questions about the procedure in four other states – Alabama, Delaware, Florida, and Indiana – where the judge decided life imprisonment or death after hearing a jury’s recommendation. The Ring opinion also said that any aggravating factors must be stated in the indictment, thus also requiring a change in federal death penalty laws. [DPIC article] (see January 11, 2003)

June 24, 2004: New York State’s highest court ruled that a central provision of the state’s capital punishment law violated the State Constitution. Lawyers said the ruling would probably spare the lives of the four men on death row and effectively suspended the death penalty in New York. The 4-to-3 ruling from the State Court of Appeals in Albany went well beyond the particulars of a single case, giving opponents of the law an important victory. Besides the four death-row inmates, lawyers said, it could spare the lives of nine defendants fighting capital cases and more than 30 others whose murder cases are in early stage. The court’s majority said, ‘Under the present statute, the death penalty may not be imposed” [NYT article] (see March 1, 2005)

June 24, 2011: New York State passed a law allowing same-sex marriage making New York the largest state that allowed gay and lesbian couples to marry. The vote came on the eve of the city’s annual Gay Pride Parade and gave new momentum to the national gay-rights movement. The marriage bill was approved 33 to 29. Cheering supporters greeted Gov. Andrew Cuomo as he arrived on the Senate floor to sign the measure at 11:55pm, just moments after the vote. [NYT article]  (see September 19, 2011)

June 24, 2014: a United Methodist Church appeals panel overturned a decision to defrock Frank Schaefer. It permitted his return to the pulpit. Schaefer was the pastor who presided over his son’s same-sex wedding ceremony and vowed to perform other gay marriages if asked.

The nine-person appeals panel ordered the church to restore Schaefer’s pastoral credentials, saying the jury that convicted him of breaking church law erred when fashioning his punishment.

The appeals panel upheld a 30-day suspension that Schaefer has already served and said he should get back pay dating to when the suspension ended in December.

The appeals panel concluded that the jury’s punishment was illegal under church law, writing in its decision that “revoking his credentials cannot be squared with the well-established principle that our clergy can only be punished for what they have been convicted of doing in the past, not for what they may or may not do in the future.” (LGBTQ, see June 25; Schaefer, see Oct 27)

June 24, 2016: President Obama announced that he was officially declaring a national monument at the Stonewall Inn, commemorating the historic rise of the modern LGBTQ movement that started there. In the early morning hours of June 28, 1969, police raided the gay bar, spurring the LGBTQ patrons to riot and begin organizing resistance efforts that turned into what is now known as Pride.

Technically the new national park was Christopher Park, the area directly across from the Stonewall Inn. Obama’s proclamation notes that the park has become “a popular destination for LGBTQ youth, many of whom had run away from or been kicked out of their homes,” as well as a place of organizing for other LGBTQ milestones:

Christopher Park and its environs have remained a key gathering place for the LGBTQ community. For example, on June 26, 2015, within moments of the issuance of the Supreme Court’s historic ruling in Obergefell v. Hodges, LGBTQ people headed to Christopher Park to celebrate the Court’s recognition of a constitutional right to same-sex marriage. A few days later, Governor Cuomo continued that celebration by officiating at the marriage of two gay men directly outside the Stonewall Inn. Within minutes of the recent news of the murders of 49 people in a nightclub in Orlando, Florida — one of the most deadly shootings in American history — LGBTQ people and their supporters in New York headed again to Christopher Park to mourn, heal, and stand together in unity for the fundamental values of equality and dignity that define us as a country. (see June 30)