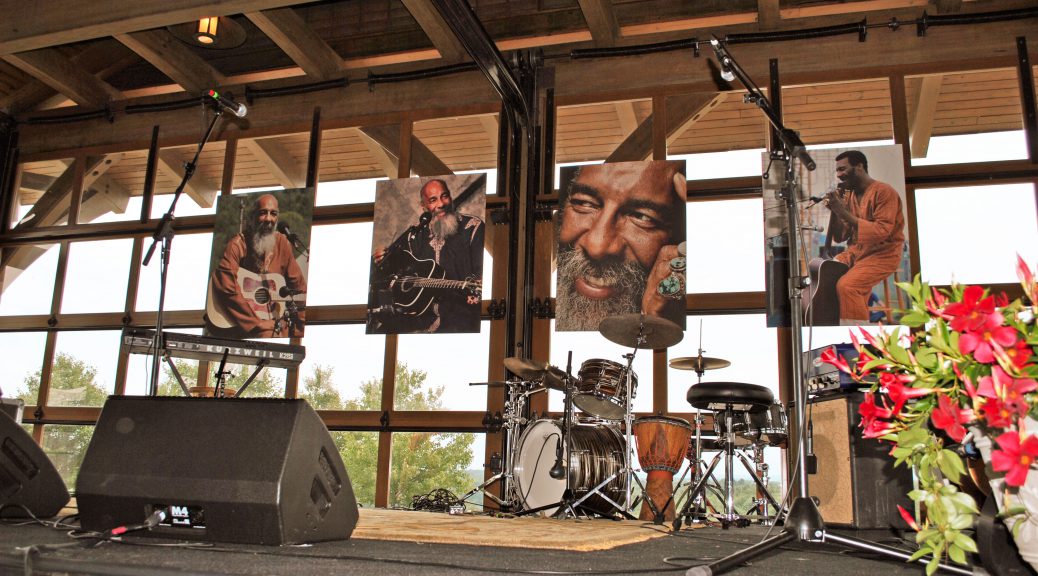 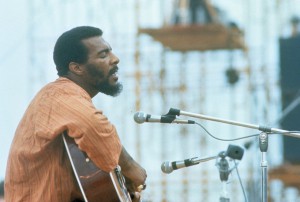 The above recording is Richie Havens on the Voice of America. He performed the song, Freedom, while explaining the cultural significance of Woodstock and his own performance there.

Richie Havens. Doo-wop. Gospel. Drop out. Greenwich Village. Open D tuning. Mixed Bag. Just Like a Woman. And though he didn’t write the words, no one ever say them better (Jerry Merrick’s “Follow”)

The rising smell of fresh-cut grass,

I hold some grapes up to the sun

And their flavor breaks upon my tongue.

With eager tongues we taste our strife

And fill our lungs with seas of life.

Come taste and smell the waters of our time.

And close your lips, child, so softly I might kiss you,

Let your flower perfume out and let the winds caress you.

As I walk on through the garden,

I am hoping I don’t miss you

If all the things you taste ain’t what they seem,

Richie Havens was a lighthouse for the sixties’ rough seas. After a February meeting in 1969, Woodstock Ventures, the quartet of John Roberts, Joel Rosenman, Artie Kornfeld, and Michael Lang, frolicked, staggered, and romanticized its way to August 15, 1969. 500,000 cultural refugees arrived in Bethel, NY with bated breath and found a place to harmoniously exhale.

The Woodstock Music and Art Fair was a tumultuously peaceful gathering, an acoustic jewel set athwart the 1960’s cultural maelstrom. The decade embroiled, alienated, and divided American families, friends, and neighbors. It was the decade of the Cold War and nuclear proliferation, murderous violence against an expanding civil rights movement, scores of race riots, thousands of casualties in an escalating Viet Nam War, draft card burnings, anti-war demonstrations, patriotic exhibitions, protest music, student radicalization, assassinations, war atrocities, the Stonewall riots, a burgeoning drug culture, a growing ecological sensibility, a generally anti-establishment attitude by many young people, and the founding of the Black Panther Party, the National Organization for Women, the American Indian Movement, and the National Farm Workers Association.

Only months away were Altamont, the Mayday Tribe’s attempt to shut down Washington DC, the invasion of Cambodia, six students shot and killed at Kent State and Jackson  State, the takeover of Alcatraz, the Weatherman bombings, 200,000 Post Office workers striking,  and the Beatle break-up were. The Grateful Dead would play 143 more shows within the year; 1,891 before Jerry Garcia’s death in 1995.

Richie Havens was the accidental opening act, but became the exposition’s keystone in its arch of apprehensions, anticipations, and hallucinations. He continued to be more than one generation’s underpinning for 44 years.

After a half century of loving performances and a life dedicated to seeking peaceful solutions, Richie Havens died on April 22, 2013 at age 72.

Thank you Mr. Havens for being so much to so many. As you wrote in “Three Day Eternity”

If you could only see the thousands

Of the days I’m standing in between

All because you hold my hand so tightly

As we both walk and we laugh.

A quick incomplete bullet-point summary of his life:

One of Richie Haven’s final requests was that his ashes be spread on the Woodstock field. On  August 18, 2013 there was a special celebration at Bethel Woods Center for the Arts that preceded the fulfillment of that request.

The featured image of this post is of that event and you can follow this link to see other pictures of the celebration.