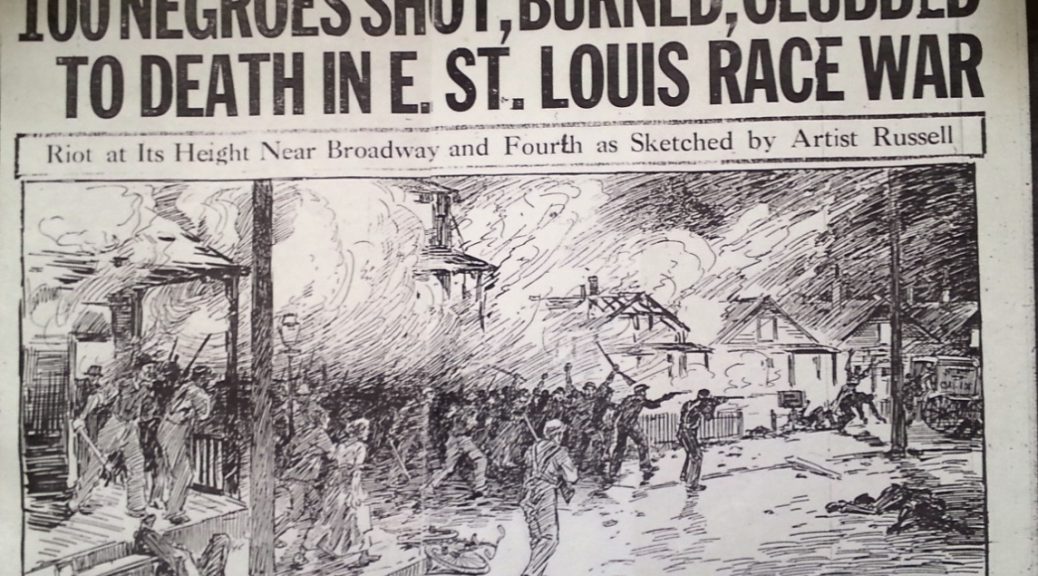 July 8, 1860: more than 50 years after Congress banned the importation of enslaved Africans into the United States, the slave ship Clotilde arrived in Mobile, Alabama, carrying more than 100 enslaved people from West Africa. Captain William Foster commanded the boat, and was later said to be working for Timothy Meaher, a white Mobile shipyard owner who built the Clotilde.

Captain Foster evaded capture by federal authorities by transferring the enslaved Africans to a riverboat and burning and then sinking the Clotilde. [EJI article]  (next BH, see March 27, 1861; Clotilde, see May 22, 2019) 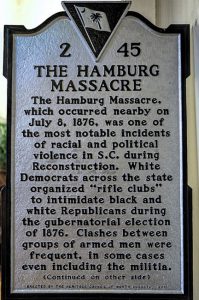 July 8, 1876: the Hamburg Massacre took place in South Carolina after African-American members of a militia marched on the Fourth of July. Two white farmers, temporarily obstructed from traveling through town, brought a formal complaint, demanding the disbandment of the militia. Hundreds of armed white men descended on the small black community, and militia members retreated to a warehouse they used as their armory. The attackers fired a cannon at the armory, eventually killing seven, six of them African Americans. It was the beginning of the “Redemption,” re-instituting white supremacist rule. The only known monument that exists honors the lone white soldier who died. [Black Past article] (next BH, see January 29, 1877)

July 8, 1917: Garvey delivered an address, “The Conspiracy of the East St. Louis Riots,” at Lafayette Hall in Harlem, in which he stated that the East St Louis riot (see July 2) was “one of the bloodiest outrages against mankind.” (BH, see July 28; see MG for expanded Garvey story)

July 8, 1963: Robert Fahsenfeld, owner of a segregated lunchroom in the racially tense Eastern Shore community of Cambridge, Maryland, douses a white integrationist with water. The integrationist, Edward Dickerson, was among three white and eight African American protesters who knelt on the sidewalk in front of the restaurant to sing freedom songs. A raw egg, which Fahsenfeld had broken over Dickerson’s head moments earlier, still is visible on the back of Dickerson’s head. The protesters were later arrested.

July 8, 1944: the French discovered a Viet Minh base in Cao Bang province with arms and other material and warned of an immediate need “to re-establish authority.” The Viet Minh controlled much of the border areas on northern Vietnam in Cao Bang, Bac Kan, and Lang Son provinces. (see Dec 27) 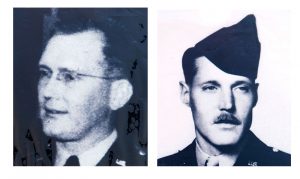 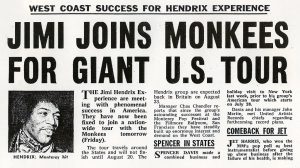 July 8, 1967: The Monkees, one of the biggest acts in the US, started a US concert tour. Mickey Dolenz had strongly recommended hiring Jimi Hendrix and his band as their opening act. Peter Tork and Michael Nesmith supported the choice; both were anxious to be accepted as serious musicians and believed that Hendrix would lend them some credibility among rock critics and older record buyers. Tork would later say, “Besides, …it would give us the chance to watch Jimi Hendrix perform night after night!”

Jimi, on the other hand, thought The Monkees’ music was “dishwater,” but his manager convinced him to sign on for the tour and to capitalize on the buzz generated by his Monterey Pop performance

The Monkees’ young fans were confused by the overtly sexual stage antics of Hendrix, and when he tried to get them to sing along to “Foxy Lady” they stubbornly screamed “Foxy Davy!”  (next Hendrix, see July 16; see Hendrix/Monkees for expanded story)

July 8, 1980: The Democratic Rules Committee states that it will not discriminate against homosexuals. At their National Convention on August 11-14, the Democrats become the first political party to endorse a homosexual rights platform. (see Sept 9) 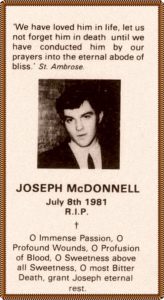 July 8, 1982: W.A. Boyle, the former president of the United Mine Workers who was convicted of hiring assassins to kill union rival Joseph Yablonski, lost an appeal for a new trial when the Pennsylvania  State Supreme Court ruled that the verdict was fair. (see Nov 16)

July 8, 2006: four other soldiers charged with participating in the rape and murders; a fifth charged with dereliction of duty for failing to report the crimes (see in July 2006)

July 8, 2007:  the former American secretary of state Colin Powell revealed that he’d spent 2½ hours vainly trying to persuade President George W Bush not to invade Iraq and believed the conflict could not be resolved by US forces. [2015 NBC News interview] (see Aug 16)

July 8, 2011:  “The U.S. Drug Enforcement Administration (DEA) ruled that marijuana has “no accepted medical use” and should therefore remain illegal under federal law — regardless of conflicting state legislation allowing medical marijuana and despite hundreds of studies and centuries of medical practice attesting to the drug’s benefits.

The judgment came in response to a 2002 petition by supporters of medical marijuana, which called on the government to reclassify cannabis, which is currently a Schedule I drug — like heroin, illegal for all uses — and to place it in Schedule III, IV or V, which would allow for common medical uses…

The government had long delayed making a judgment on the petition, but now that it has, it makes it possible for advocates to appeal it in federal court. Now, that process can be set in motion.” (next Cannabis, see November or see CCC for expanded chronology)

July 8, 2013: a federal U.S. District Judge William Conley temporarily blocked part of Wisconsin’s new abortion law and scheduled a hearing for next week. The law includes provisions similar to those in several other states that require women to undergo an ultrasound procedure before having an abortion and require doctors who provide abortion services to have admitting privileges at a hospital. Opponents, including Planned Parenthood of Wisconsin, which is representing two doctors and an abortion clinic in challenging the law, said the measure was rushed into effect and that the provision affecting doctors would force two of the state’s four clinics to close. Conley agreed that the law had been rushed onto the books, noting that it was proposed, passed, signed and enacted in just 34 days, a timeline he called “precipitous.” [Reuters article] (see Oct 28)

As a consequence of the ruling, about 70,000 to 126,000 women could lose contraceptive coverage from their employers, according to government estimates.

The vote was 7 to 2, with Justices Ruth Bader Ginsburg and Sonia Sotomayor dissenting. [NYT article] (next WH/ACA, see July 10)

July 8, 2015: Housing and Urban Development Secretary Julián Castro released new rules to promote integrated neighborhoods, a goal that has lagged in many cities, despite a 1960s ban on racial discrimination. The potentially far-reaching initiative would require localities receiving HUD funds to study patterns of racial bias in housing, report publicly on their findings and set goals for ending segregation that will be monitored.

Efforts to combat segregation in housing date to the 1968 Fair Housing Act, which was recalled last month when the U.S. Supreme Court (June 25) reaffirmed its authority to prohibit housing policies unfair to minorities The ruling and the new administration effort put heat on local governments to carry out the mandate of the nearly half-century-old law to “affirmatively further” the goals of nondiscrimination in housing.  [NYT article] (see July 13)

July 8, 2019: Behrouz Kamalvandi of Iran’s country’s atomic energy agency  announced that the country had breached a crucial limit on the level of uranium enrichment set out in the 2015 nuclear deal.  China, another signatory to the deal, accused the United States of “bullying” Tehran with crippling economic sanctions.

Kamalvandi told the Iranian state broadcaster IRIB that the country had surpassed a limit of 3.67 percent uranium enrichment, and was prepared to go further. Kamalvandi later told another Iranian news outlet, ISNA, that the enrichment level was above 4.5 percent. (next N/C N, see Aug 2; next Iran, see January 5, 2020)

July 8, 2019: Judge Amit P. Mehta, of the United States District Court in the District of Columbia ruled that the Trump administration could not force pharmaceutical companies to disclose the list price of their drugs in television ads

Mehta ruled that the Department of Health and Human Services exceeded its regulatory authority by seeking to require all drugmakers to include in their television commercials the list price of any drug that costs more than $35 a month. [NYT article] (see Sept 11)

July 8, 2020: in the cases of Our Lady of Guadalupe School v. Morrissey-Berru, No. 19-267, and St. James School v. Darryl Biel, No. 19-348 , the Supreme Court ruled that federal employment discrimination laws do not apply to teachers at church-run schools whose duties include religious instruction.

The 7-to-2 ruling could affect more that 100,000 teachers at Catholic elementary and secondary schools and many other employees of religious groups.

Justice Samuel A. Alito Jr., writing for the majority, said the First Amendment’s protection of religious freedom forbids judges from interfering in the internal workings of religious institutions.

“When a school with a religious mission entrusts a teacher with the responsibility of educating and forming students in the faith,” he wrote, “judicial intervention into disputes between the school and the teacher threatens the school’s independence in a way that the First Amendment does not allow.” [NYT article] (next Separation, see July 24)