July 14, 2018: John Saro Balian, a Glendale, California narcotics detective had pleaded guilty on July 12 to federal charges that he had accepted a bribe, obstructed justice and lied to federal investigators about his involvement with organized crime. Judge John F. Walter of United States District Court for the Central District of California ordered the plea agreement sealed, but a reporter found it posted online on July 13 in a public database of federal court documents.

The Los Angeles Times published the article about the plea agreement on the same day and subsequently received a court order from Walter to remove the article.

The LA Times did so on this date, but said it would appeal the court order. (see July 19) 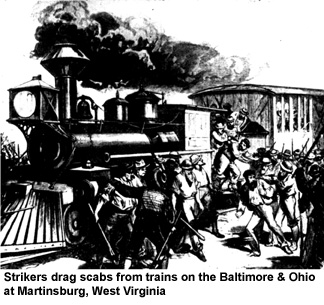 July 14, 1877: The Great Uprising nationwide railway strike began in Martinsburg, W Va, after railroad workers were hit with their second pay cut in a year. In the following days, strike riots spread through 17 states. The next week, federal troops were called out to force an end to the strike. [2015 Politico article] (see July 23)

July 14, 1917: the National Women’s Party picketed in front of the White House to raise awareness about the suffrage movement. Police arrest protesters and some, including Lucy Burns, to go on hunger strikes while in jail. This level of militancy yields sympathy from some quarters but disdain from others. (see July 17) 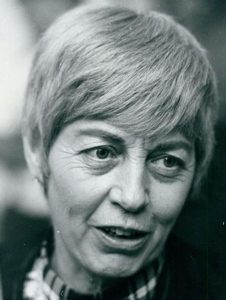 July 14, 2015: the U.S. Court of Appeals for the 10th District ruled that Little Sisters of the Poor cannot receive a full exemption from the law’s contraception rules because they “do not substantially burden plaintiffs’ religious exercise or violate the plaintiffs’ First Amendment rights.”

Under the contraception mandate, nonprofit religious groups such as Little Sisters of the Poor were permitted to opt out of the requirement if they report their concerns to their insurance companies or the federal government. But that group and others had objected to any extra steps to obtain the exemption. Instead, they were seeking the same treatment as houses of worship, which were not required to fill out additional paperwork in order to avoid fines under the law. [Baltimore Sun article] (see Aug 10)

July 14, 1925: the third day of the Scopes trial, attorney Clarence Darrow objected to the practice of opening the trial with a prayer. Judge Raulston overruled the objection, noting that he had instructed the ministers who offer the prayer to “make no reference to the issues involved in this case.” (see Scopes for expanded story)

July 14, 1948: President Harry Truman and the Democratic Party adopted a platform that called for a federal anti-lynching law, the abolition of poll taxes and the desegregation of armed forces. Three days later, Southern “Dixiecrats” held their own convention and nominated South Carolina Governor Strom Thurmond for president.  [text of platform] (next BH, see July 26); next Lynching, see April 28, 1951; for expanded chronology of lynching, see also AL4) 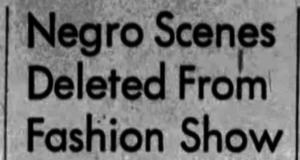 July 14, 1959: a New York committee organizing a fashion show for the American National Exhibition in Moscow, Russia, announced it would be removing three scenes that featured Black and white models together after dozens of fashion editors protested the representation of racial integration.

The fashion show, which was sponsored by the U.S. State Department and meant to illustrate daily American life, was to be exhibited in Moscow 10 days later. Before the exhibition opening, the organizing committee for the show hosted previews in New York, which dozens of American fashion editors were invited to attend.

Immediately after the previews, over 40 of the fashion editors in attendance signed and circulated a petition demanding that the committee remove three staged wedding scenes that showed racially-integrated groups interacting with one another, claiming the scenes were not “representative of the American way of life.”

Within a day, on July 14, the fashion show’s organizing committee announced that it would be removing each of the racially-integrated scenes, effectively eliminating the Black models from the show. A spokesman for the show added that the organizers had not yet decided what, if any, future role would exist for the Black models—who were only 3 of 47 total models involved in the show. [EJI article] (next BH, see Aug 16) 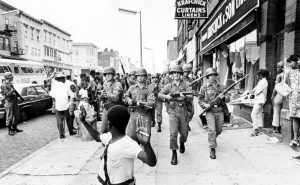 July 14, 2006: Mississippi Circuit Court judge Marcus D. Gordon refused to let Edgar Ray Killen out of prison while he appealed his conviction in the killing of three civil rights workers in 1964. It was the second time that Mr. Killen, 81, had asked to be freed on bond because of poor health. (next BH, see July 25; see Murders for expanded story)

July 14, 1969: Dylan made a guest appearance with The Band at the Mississippi River Festival. He came out for the Band’s encore and played four songs with them. This was his first concert performance since the Woody Guthrie concert on January 20, 1968. (see August 15)

The bumpy road to Bethel

July 14, 1969:  THE meeting. Woodstock Ventures presented its application for the festival’s approval based on the new ordinance. The meeting lasted until 1 AM. (see Chronology for expanded story) 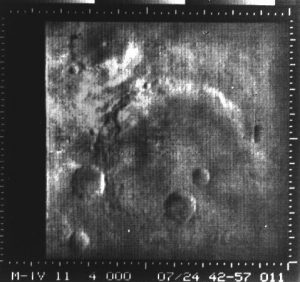 July 14, 2013: the Satanic Temple, a New York-based organization that seeks to foster “benevolence and empathy among all people” through Satan, performed a ritual called a “pink mass” at the Mississippi gravesite of Catherine Idalette Johnston, mother of WBC founder Fred Phelps Jr. “Upon completion of the pink mass ceremony, Catherine Johnston is now gay in the afterlife,” notes the Satanic Temple website. “Fred Phelps is obligated to believe that his mother is now gay … [and] if beliefs are inviolable rights, nobody has the right to challenge our right to believe that Fred Phelps believes that his mother is now gay.” The latter assertion appears to be a play on the WBC’s own stance that their beliefs are totally infallible. (see July 29)

July 14, 2015: Iran and a group of six nations led by the United States agreed to an historic accord to significantly limit Tehran’s nuclear ability for more than a decade in return for lifting international oil and financial sanctions against Iran. [NYT article](next N/C N, see July 15; next Iran, see Sept 2)

July 14, 2015: the U.S. Department of Justice charged Georgia with illegally segregating thousands of students with behavioral disorders in schools that often were dirty, in poor repair and, in some cases, once served as blacks-only facilities before court-ordered integration.

In a strongly worded letter to Gov. Nathan Deal and Attorney General Sam Olens, the DOJ said the state was “unnecessarily segregating students with disabilities from their peers.” Further, the letter said, those students were receiving inferior instruction and had few if any opportunities to participate in extracurricular activities.

“Students with disabilities who have been inappropriately segregated from their peers without disabilities also face tremendous ongoing harms: they may become victims of unwanted stigma and may be deprived of essential opportunities to learn and to develop skills enabling them to effectively engage with their peers in ways that teach them to participate in mainstream society as they mature into adulthood,” the DOJ said.

The department said the Georgia Network for Educational and Therapeutic Support, which operated in 24 locations around the state, was violating the Americans with Disabilities Act. If Georgia did not make substantial changes, the department would take the state to court to force improvements. (see February 22, 2017)

July 14, 2017: federal judge Derrick K. Watson of Federal District Court in Honolulu in Hawaii ruled that the Trump administration’s temporary ban on travelers from six predominantly Muslim countries and on refugees should not prevent grandparents and other close relatives of residents from entering the United States. Watson also declared that refugees with ties to a resettlement agency that was committed to receiving them had a relationship that made them eligible to enter the country. [NYT article] (Immigration, see July 24; Trump policy, see Sept 7)

July 14, 2020:  NPR reported that in a swift reversal, the Trump administration agreed to rescind a directive that would have barred international college students from the U.S. if their colleges offered classes entirely online in the fall semester.

The U.S. Immigration and Customs Enforcement July 6 rule change would have prohibited foreign students from entering or remaining in the country to take fully online course loads. A number of colleges and universities had already announced plans to offer online-only classes because of the coronavirus pandemic.

The agency’s announcement had been  met with immediate backlash. (next IH, see July 28)

July 14, 2020: hours after the Supreme Court rejected a last-minute legal challenge on a 5-to-4 vote, the Justice Department put Daniel Lewis Lee to death for his role in the 1996 murder of a family of three, the first federal execution in more than 17 years.

Lewis, 47, a former white supremacist who renounced his ties to that movement, was executed by lethal injection at the federal penitentiary in Terre Haute, Ind., the Bureau of Prisons said. He is the first of three federal inmates scheduled for execution this week.

July 14, 2021: Senator Chuck Schumer of New York proposed legislation to decriminalize marijuana at the federal level, putting his weight as majority leader behind the growing movement to unwind the decades-old war on drugs.

The draft bill, called the Cannabis Administration and Opportunity Act, would remove marijuana from the Controlled Substances Act and begin regulating and taxing it, placing federal rules on a burgeoning industry that has faced years of uncertainty. Though states would still be allowed to set their own marijuana laws, businesses and individuals in states that have legalized its use would be free for the first time to sell and consume it without the risk of federal punishment.

The proposal would also try to make recompense to communities of color and the poor for damage from years of restrictive federal drug policy. It calls for immediately expunging nonviolent marijuana-related arrests and convictions from federal records and would earmark new tax revenue for restorative justice programs intended to lift up communities affected by “the failed federal prohibition of cannabis.”

The bill aimed to “finally turn the page on this dark chapter in American history and begin righting these wrongs,” said Senator Cory Booker, Democrat of New Jersey, who wrote the bill with Mr. Schumer and Senator Ron Wyden, Democrat of Oregon and the chairman of the Finance Committee. [NYT article] (next Cannabis, see Aug 1, or see CAC for expanded contemporary chronology)

The report, citing civil court documents, said that 70 or more young athletes had been sexually abused by Nassar between July 2015, when U.S.A. Gymnastics first reported allegations against him to the F.B.I.’s Indianapolis field office, and August 2016, when the Michigan State University Police Department received a separate complaint.

John Manly, a lawyer for many of the victims, said that number is likely even higher — about 120 patients, including one as young as 8 years old.

The inspector general’s report said senior F.B.I. officials in the Indianapolis field office failed to respond to the allegations “with the utmost seriousness and urgency that they deserved and required” and the investigation did not proceed until after a September 2016 report by The Indianapolis Star detailed Nassar’s abuse.  [NYT article] (next SAC, see July 28)

July 14, 2021: according to a new study that the scientific journal Nature published, parts of the Amazon rainforest were emitting more carbon dioxide than they absorb, raising fears of the potentially devastating impact on its fragile ecosystems and a further worsening of the climate crisis,.

The research said that the Amazon’s vital role as a carbon sink — absorbing massive amounts of heat-trapping carbon dioxide from the atmosphere, helping to cool the Earth –was under threat.

“This carbon sink seems to be in decline,” the study said. “Over the past 40 years, eastern Amazonia has been subjected to more deforestation, warming and moisture stress than the western part, especially during the dry season.”

Over nine years, researchers led by Brazil’s National Institute for Space Research conducted close to 600 flights over four main sites in the Brazilian Amazon, collecting data on the amount of carbon dioxide and carbon monoxide in the atmosphere.  [CNN article] (next EI, see July 20)