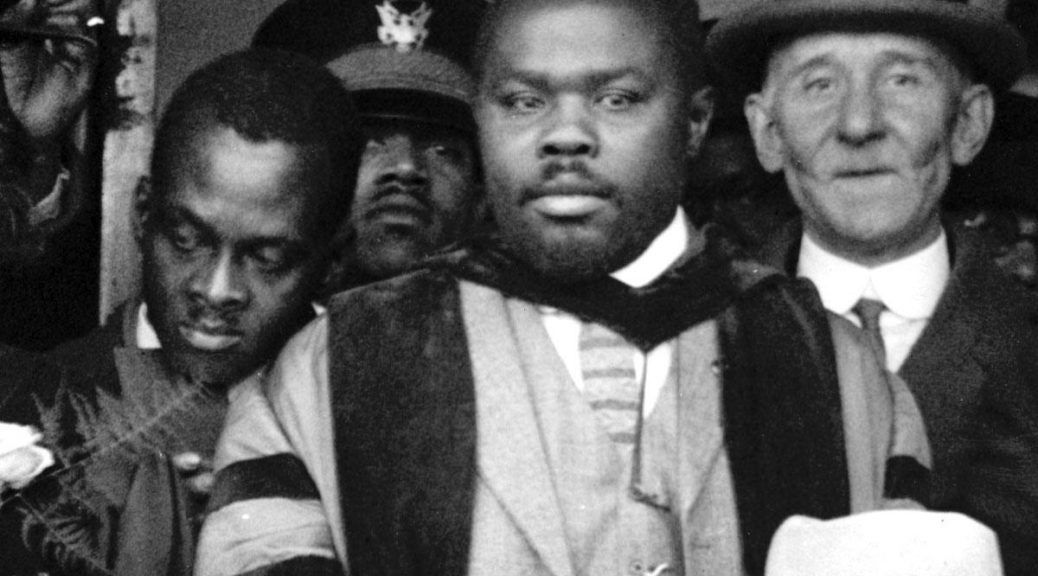 Marcus Mosiah Garvey, Jr was born on August 17, 1887 in St Ann’s Bay, Jamaica. Though poor, his father had a large library from which Garvey first developed a love of reading.

In his 20s, Garvey traveled throughout the Central American region, first in Costa Rica where he worked for a newspaper. Later he did the same in Panama.

He returned to Jamaica in 1912, but soon left to attend Birkbeck College in the United Kingdom (keep in mind that Jamaica was at the time part of the British Empire) where he continued to be involved in publications. He also began to speak publicly about Black Nationalism.

As the diJamaica site states: Garvey thought that the only way blacks could take their rightful place in history was in a secure African homeland, where they could develop their own culture and civilization. He was convinced that blacks would always be dominated by whites if they remained as minority groups scattered throughout white-dominated countries.

Back to Jamaica thence to the USA 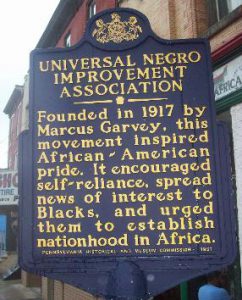 July 20, 1914: Garvey returned to Jamaica and there he and Amy Ashwood founded the  Universal Negro Improvement Association and African Communities League in Jamaica. The U.N.I.A. was originally conceived as a benevolent or fraternal reform association dedicated to racial uplift and the establishment of educational and industrial opportunities for blacks.

In a 1923 Current History article, Garvey explained, Where did the name of the organization come from? It was while speaking to a West Indian Negro who was a passenger with me from Southampton, who was returning home to the West Indies from Basutoland with his Basuto wife, I further learned of the horrors of native life in Africa. He related to me in conversation such horrible and pitiable tales that my heart bled within me. Retiring from the conversation to my cabin, all day and the following night I pondered over the subject matter of that conversation, and at midnight, lying flat on my back, the vision and thought came to me that I should name the organization the Universal Negro Improvement Association and African Communities (Imperial) League. Such a name I thought would embrace the purpose of all black humanity. Thus to the world a name was born, a movement created, and a man became known.

March 23, 1916: Garvey arrived in America penniless, moved in with a Jamaican family in Harlem, New York City, and found work as a printer. He gained a following for his movement by speaking nightly as a soapbox orator on a Harlem street corner.

April 25, 1916: Garvey visited W.E.B. Du Bois, the editor of The Crisis, the magazine of the National Association for the Advancement of Colored People.

In May – June 1916: Garvey began a year-long, 38-state speaking tour that takes him across America.

In May 1917: Garvey returned to New York after completing his U.S. speaking tour. Thirteen members joined to form the New York branch of the Universal Negro Improvement Association.

July 8, 1917: delivered an address, “The Conspiracy of the East St. Louis Riots,” at Lafayette Hall in Harlem, in which he stated that the riot was “one of the bloodiest outrages against mankind.” (St Louis race revolt, see July 2, 1917)

June 3, 1918: the Federal Bureau of Investigation learned via a written report that Garvey spoke nightly at outdoor meetings on a Harlem street corner.

August  17, 1918: the first issue of The Negro World, the official publication of the Universal Negro Improvement Association, published. 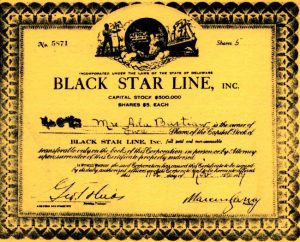 April 27, 1919: Garvey announced his plan to start the Black Star Line. The Black Star Line was to be the U.N.I.A.’s vehicle for promoting worldwide commerce among black communities. In Garvey’s vision, Black Star Line ships would transport manufactured goods, raw materials, and produce among black businesses in North America, the Caribbean, and Africa, and become the linchpin in a global black economy.

June 23, 1919: Garvey assists with the incorporation of the Black Star Line, the Universal Negro Improvement Association’s vehicle for promoting worldwide commerce among black communities. In Garvey’s vision, Black Star Line ships would transport manufactured goods, raw materials, and produce among black businesses in North America, the Caribbean, and Africa, and become the linchpin in a global black economy.

October 11, 1919: with the goal of deporting Garvey firmly in mind, J Edgar Hoover wrote a memo suggesting that investigators pursue the idea of prosecuting Garvey for fraud, in connection with his Black Star Line activities. October 14, 1919: a George Tyler burst into Garvey’s Harlem office by kicking in the downstairs door and demanding an audience. When Garvey went to investigate, Tyler opened fire. Garvey was struck once in the scalp and twice in the leg but was shielded from further injury by Amy Ashwood.

After a scuffle, Tyler ran off but was arrested.  The next day, Tyler reportedly tried to escape by jumping through a window but fell 30 feet to his death. Some historians consider his death a homicide.

Despite being bandaged and still recovering from the wounds, Garvey made it to a speaking engagement in Philadelphia the next day, solidifying his growing support.

January 23, 1920: Garvey incorporated The Negro Factories Corporation, the finance arm of the Universal Negro Improvement Association. A cornerstone of Garvey’s vision for black economic independence, he created the NFC with the goal of supporting businesses that would employ African Americans and produce goods to be sold to black consumers. Garvey envisioned a string of black-owned factories, retailers, services and other businesses, and hoped that the corporation would eventually be strong enough to power and sustain an all-black economy with worldwide significance. 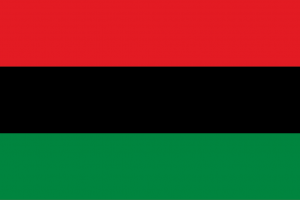 August 1 > 31, 1920: the Universal Negro Improvement Association held its first International Convention of the Negro Peoples of the World at Madison Square Garden and scheduled a massive parade in Harlem. During this convention, the UNIA adopted and signed a Declaration of Rights of the Negro Peoples of the World, adopts a “nation” flag with the colors of the Red, Black, and Green, and elects officials for its provisional government. The convention elected Garvey the first Provisional President of Africa. 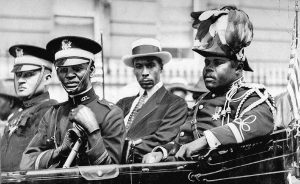 January 12, 1922: Garvey arrested for fraudulent use of mails; he is held on a $2,500 bond pending presentation of his case to a federal grand jury. 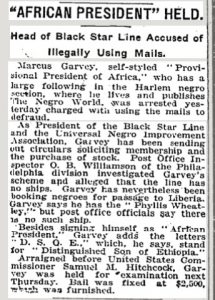 February 7, 1923: Edward Young Clarke. Imperial Giant of the Ku Klux Klan, came New York City from Atlanta, GA and appeared before the Federal Grand Jury as a witness against Garvey. who would to be tried on Feb. 20 on a charge of defrauding investors in the Black Star Line.

June 17, 1923: two days before his trial ended with a guilty verdict, Garvey spoke to a crowd at Liberty Hall in New York City. Here is the beginning of that speech:

Among the many names by which I have been called, I was dubbed by another name a couple days ago.  The district Attorney, with whom I have been contesting the case for my liberty and for the existence of the Universal Negro Improvement Association, in his fervid appeal, in his passionate appeal, to the gentlemen of the jury last Friday cried out: “Gentlemen, will you let the tiger loose?”

The tiger is already loose, and he has been at large for so long that it is no longer one tiger, but there are many tigers.  The spirit of the Universal Negro Improvement Association has, fortunately for us, made a circuit of the world, to the extent that harm of injury done to any one, will in no way affect the great membership of this association or retard its great program.  The world is ignorant of the purpose of this association.  The world is ignorant of the scope of this great movement, when it things that by laying low any one individual it can permanently silence this great spiritual wave, that has taken hold of the souls and the hearts and minds of 4000,000,000 Negroes throughout the world.  We have only started; we are just on our way; we have just made the first lap in the great race for existence, and for a place in the political and economic sun of men. 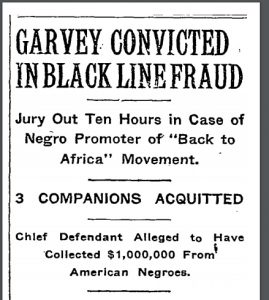 June 21, 1923: Garvey sentenced to 5 years in prison for mail fraud. He remained free on bail but on… 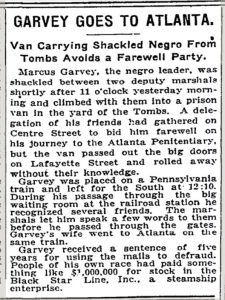 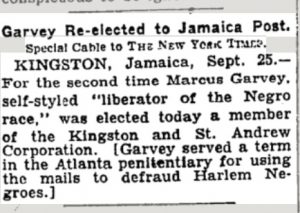 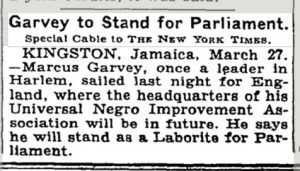 November 10, 1964: Garvey’s body was returned to Jamaica. The following day he was declared the country’s first national hero. He is buried in the Marcus Garvey Memorial, National Heroes’ Park, Kingston, Jamaica.

The Jamaican government has repeatedly tried, but failed, to have the US government exonerate Garvey’s name. 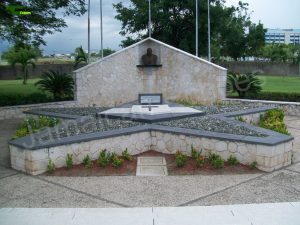